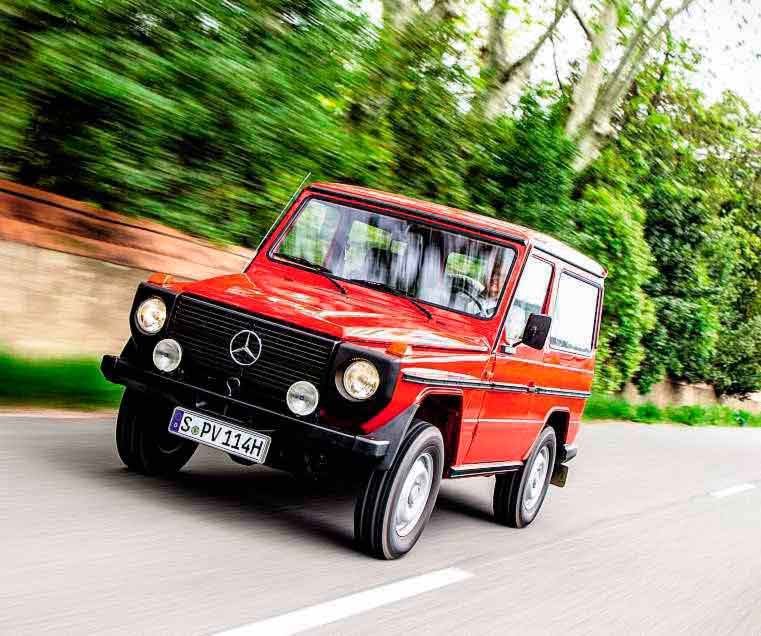 King off the road Mercedes-Benz has just launched the mighty new G-class. Time, then, to celebrate the simplicity of the original Geländewagen. Words Glen Waddington. Photography Dieter Rebmann.

The contrast couldn’t be much greater. Before setting out in this 89bhp, 2.3-litre 1982 Mercedes-Benz G-wagen, I’d stepped out of the monstrously powerful – 577bhp – G63 AMG. The new one. Which is capable of amazing feats on the road as well as off (see Drive-My). Yet none of that is to denigrate the original. Times – and it’s taken four decades – have changed, especially in SUV world. That phrase, for a start. The original G-wagen was no SUV because such things didn’t exist. Geländewagen means ‘offroad vehicle’. Its evolution has been remarkable. And this is where it began. The latest is the first all-new version since the G-wagen was introduced in 1979, though there was a bit of a revision 28 years ago (a new dashboard was the biggest visual alteration), which Mercedes-Benz felt was significant enough to change its internal model code from W460 to W463. Yet this time, as if to underscore the lengthy history of its predecessor, the new car is still a W463, though they now call it the ‘G Class’ to harmonise with the rest of the model range.

There is still a ladder-frame chassis (though overall torsional rigidity is up by 55%) and it’s now the only roadgoing production car on sale with three differential locks and a high/low-ratio transfer ’box. Its 700mm wading depth is 100mm greater than before and it’ll tackle a 45º slope, so the rock-climbing, sand-duning, green-laning, ice-driving insouciance of old is still a key aspect of G-wagenism. The new G also does things our ’1982 G230 couldn’t, but those are mostly things the G-wagen was never intended to do, such as blasting along the autobahn in comfort and relative silence at 140mph. If you want the real deal, this is it.

‘A SCRABBLE OVER SOME ROCKS AND A STEEP CLIMB UP A BANK BREAK NO SWEAT, EITHER FOR THE G-WAGEN OR ITS DRIVER’

It has its origins in a project that began in the early 1970s, when market research (prescient, in hindsight) suggested that there would be an upsurge in the appetite for domestic all-wheel-drive utility vehicles, as proven by the arrival and eventual success of the Range Rover. Mercedes-Benz had history here, with six-wheel tourers for wartime dignitaries and larger, tougher off-roaders that led to the more commercial-biased Unimog. Even so, it cast about for a development partner and turned to Steyr-Puch of Graz, Austria, producer of the compact Haflinger off-roader. It was a company with illustrious history, with both Hans Ledwinka and Ferdinand Porsche among its chief engineers.

Following an agreement in 1972, the 50:50 Gelände-fahrzeug GmbH (GfG) joint venture was formalised between Mercedes- Benz and Steyr-Puch in 1977, when extension work began on the manufacturing plant at Graz, and plans were drawn up for the Type 460 Geländewagen: a car that would be at home on or off the beaten track. GfG benchmarked the Range Rover as its main rival, but the brief also called for simplicity of construction – to enable assembly away from the factory – plus the strength and ease of repair required for military use. Interest had been shown by the German Army and also by influential Benz shareholder Mohammad Reza Pahlavi – otherwise known as the Shah of Iran.

‘BETWEEN THE AIRPORT AND HERE WE’VE SPOTTED A FEW OLDER G-WAGENS, CLEARLY AT HOME IN HILLY, RURAL SURROUNDINGS’

There would be two wheelbases, characteristic plain panelling and flat glass, plus gaping, uncurved wheelarches: GfG executives hoped that look would remain current for ‘up to ten years’, yet here we are at the end of the G-wagen’s fourth decade and even the brand new model looks remarkably familiar… Underneath, for raw strength, a tough ladder-frame chassis was specified with live axles front and rear, plus the availability of forward, central and rear locking differentials, a high/low-ratio transfer ’box and selectable four-wheel drive.

The latter sounds curious in today’s world of permanent four-wheel drive and associated electronic control and torque apportioning, but the selectable system allowed for greater ability off-road without compromising on road refinement, when rear-drive would suffice. Engines (two diesels, plus petrols with four or six cylinders) came from Mercedes-Benz’s passenger car range; interior appointments (such as they were – it’s pretty utilitarian in there) were shared with the company’s light commercials. The G-wagen was launched in the South of France, at a special off-road course in Toulon.

Press reception was highly enthusiastic: ‘The new cross-country Mercedes is a truly sensational machine,’ said the photojournalist Bernard Cahier. Without a single ‘SUV’ reference, of course. And Tony Curtis, writing for Motor, said: ‘It will almost certainly prove to be one of the world’s finest small off-road vehicles.’ While he admitted that it couldn’t match the Range Rover for couthness, he declared it ‘markedly superior to the Land Rover in comfort and refinement’.

Which pretty much defines the G-wagen’s appeal: less austere than a Land Rover, not so plush and heavy as the Range Rover. It’s a theme that Autocar explored in February 1979: ‘It has been interesting to see how Daimler-Benz would attack the market. Would they aim for a refined, land-going estate car like the American Jeep Cherokee and British Range Rover, or would they aim more for the utilitarian sector dominated by the Land Rover? In the event, they have come out fairly midway between these two with a vehicle that is compact, appreciably smaller even than the Land Rover and yet which is well-trimmed and equipped, and offers a good standard of creature comforts.’

Not bad for a military vehicle. Except the G-wagen never quite achieved the success that had been planned for it in that respect. The Shah of Iran was deposed and took his 20,000-strong order with him, while the German Army bought a fleet of VW Iltis offroaders instead. Yet GfG had faith in its marketing projection, and launched the G-wagen as a civilian car, plus a handful each going to the German border police and the Argentine Army (although it’s said that General Galtieri never paid the bill). Some of the latter fell into the hands of the British during the Falklands War, and it’s believed the rest are still in service, a testament to the car’s longevity. The G-wagen was also built during the early 1980s for the French military by Peugeot, badged as the P4 and powered by French engines.

Still, those journalists had enjoyed the G-wagen, and production at Graz (it was sold as the Puch G in Austria, Switzerland and Eastern Europe) was limited, which meant that the clamour for product around the world took time to satisfy. And here we are with an early survivor, in the definitive spec of short wheelbase with estate body and the 2.3-litre four-cylinder petrol engine.

Ironically, we’re in the South of France too, not far from Perpignan at Château de Lastours, a vineyard that’s also home to a huge and varied off-road course as well as gravel tracks used for training and tuning by rally teams. Between the airport and here we’ve spotted a few older G-wagens, clearly at home in hilly, rural surroundings, and also clearly well-used. Our red car has come from the Mercedes-Benz Museum collection in Stuttgart, though it had been bought from a private owner and, while immaculate, it’s also totally original.

And it’s nothing like as imposing as a Range Rover. If SUVs have grown in stature and market presence as a result of buyers enjoying their somewhat aggressive nature, this car serves as a reminder that they had utilitarian roots. If you want to drive along the tracks and across the rough of a vineyard, you need something compact yet with a commanding driving position, to make the most of the go-anywhere ability.

Charmed by those boxy looks, I clamber inside and find an utterly rational cockpit, with a dash layout that makes for simple conversion between left- and right-hand drive: the lower dash is a painted metal panel, and the cut-out for the glovebox matches that for the steering columns and instrument binnacle on the other side. As if to remind you that, yes, this is a Merc after all, there’s a padded plastic top roll that just about matches a W123 saloon’s for texture, though all the controls – heater panel, column stalk, doorhandles and locks, minor switchgear – are recognisable from the old T1 van. No matter; the check tweed seat trim combines with rubber flooring to tell you that this is more about robustness than luxury. So it’s all ‘U’ rather than ‘S’ in this offroader.

There’s a whine and a buzz from that in-line four, instantly recognisable to anyone who’s driven a 230 saloon from the same era, and it pulls stoically if without great haste: 89bhp fights the better part of two tonnes here, after all. The steering wheel is a simple two-spoker (from that van) and there’s no power-assistance, so manoeuvring is sweatinducing; Southern French sun doesn’t help, either, as there’s no air-con, of course.

But, once you’re on the road, windows down, having fumbled and knuckled your way to fourth gear by 40mph, you can enjoy the low-speed gait, gentle ride, surprisingly roll-free cornering, and the smells of the French countryside. If you lived here, this would be a top choice as daily wheels.

Soon it’s time to leave the tarmac behind to tackle the rough gravel track that circumnavigates the vineyard, and here the G truly comes into its own. Apart from a few more bumps and the rooster-tail of dust in your wake, you barely notice the transition. Sure, the 230G is a tad slow in civilisation, not the type of car to appeal to the person who buys that new G63 AMG and travels everywhere at full tilt. But while Mr AMG might be wary of scratching his paint or scuffing his pale leather trim in this environment, we rumble on, the G displaying its impressive strength over a surface that would make most other cars creak, shimmy and give up. A scrabble over some rocks and a steep climb up a bank break no sweat, either for the G or its driver.

Point made. The 230G is compact, unaggressive and refreshing – like a Land Rover, only more refined. But it was a starting point. And while the latest G-class takes all the off-road aspects that made the original great, it adds power, refinement and convenience appointments that transform it into a luxury purchase. One that will be built at Graz in limited quantities, just as before. And it’s the only current Mercedes-Benz without a finite production span.

If you were unkind, you might call it Mercedes-Benz’s ‘ultimate SUV’. But it’s way beyond that. And a whole range of modern-day SUVs arrived in the G’s wake, starting with the ML-class of 1998, intended to replace it. Only the tough guy won.

Above left and right The simple, tough, no-nonsense 230G feels at ease on the bumpy gravel tracks of a French vineyard – indeed, anywhere in rural France.