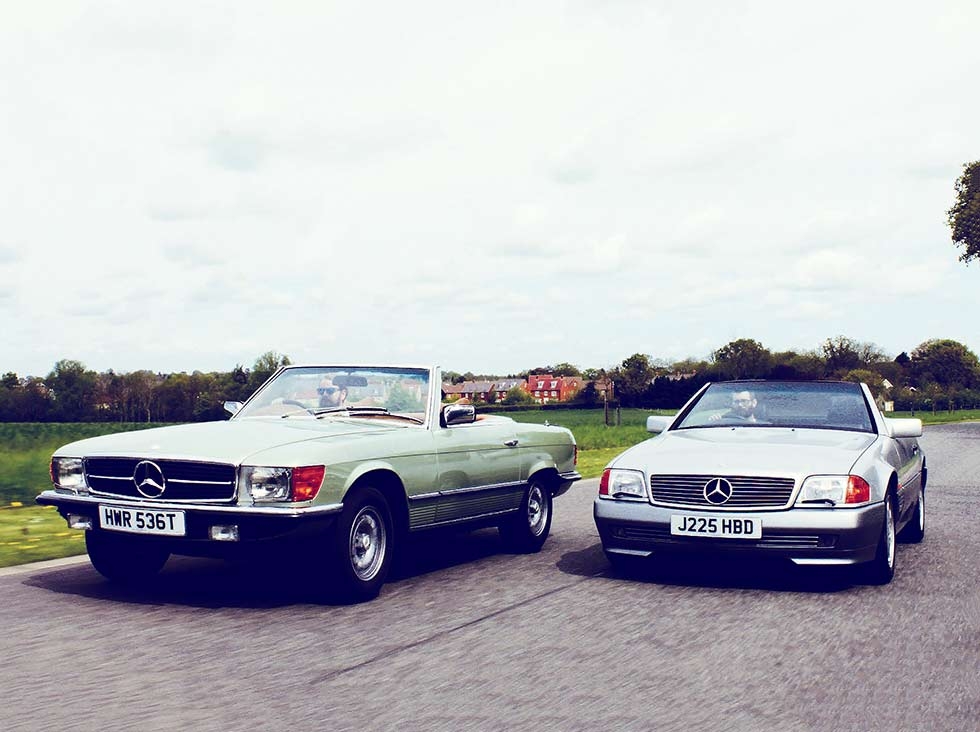 Arguably the most famous and iconic classic open Mercedes-Benz is the SL – and let’s be honest, when the weather turns dry (the closest we have to an English summer) we like to put the roof down. And with Pagoda prices strong and strengthening, the enthusiast with perhaps £10000-20000 to spend is more likely to consider the R107 and R129 models instead. This pairing, which saw the SL brand through over three decades of production, span from 2.8-litres to 6.0, six cylinders to twelve, with a healthy number of V8s between. They see the SL through from its last days as a sports car following the sporting Pagoda, through into GT-car aristocracy by the turn of the millennium.

We love both here at Mercedes Driver – but we’ve been lucky enough to get hold of one of each for the ultimate summer fun photoshoot. With that in mind, if we had the money – which would we take home?

Launched in 1971, the R107 had a tough act to follow. The Pagoda had become the darling of the smart set; at home in Chelsea or Monaco and owned by such celebrities as Audrey Hepburn and Sophia Loren. And while it had been launched in 1963 as a sports car; a smooth yet swift followup to the 190SL, the larger engines and automatic gearboxes of later models meant the SL had become a GT by the time of the 280 in 1967. The R107 would build on this; launched with the 3.5-litre V8 of our test example, it was a concerted move upmarket for the drophead Benz.

Our 1979 test car might be from midway through the production run, but mechanically it’s just as those early models were. And make no mistake, it’s a GT car – not a sports car. Soft, yielding suspension, plenty of lean, a quiet engine and an automatic gearbox leave you in no doubt – it may look dynamic, but in truth it’s little different to the contemporary saloons underneath. The R107’s twenty year life saw myriad versions, ranging from a 2.8-litre straight six (later 3.0), through the all-iron 3.5-litre and 4.5-litre V8s of the 1970s, to a pair of allalloy replacements with the 380 and 500SL models. There was even a 5.6- litre variant using the engine from the W126, for those who wanted the wind in their hair to resemble a gale.

R107 prices have firmed up considerably over the last five years or so. Back then £10,000 might have secured one of the nicest examples in regular use; today a car like that might command nearer to £20,000- 25,000. And as Pagoda values continue to rise, R107 values expand to fill the gap.

“This is how a convertible ought to be in the 21st century.”

How does it drive?

This is how a convertible ought to be in the 21st century. With ever-worsening road surfaces, we don’t want firm suspension and big wheels. Long travel springs, nice damping and light steering are far more desirable traits – more civilised, more relaxed. Not only does the muted V8 pull well, but it sounds good – and it’s coupled to a well-behaved automatic box with well-spaced ratios. And it feels special, in a timeless way despite the very Seventies colour scheme. The soft seats support you in the way that only old Merc seats can, everything is to hand, and while some of the soft touch plastics are alien to those used to modern finishes, they’re just what an old Mercedes should have. The R107 might be forty seven years old in design, but it feels more relevant today than it ever did.

Launched in 1989, the R129 SL had a tough act to follow. Its predecessor had been on sale for the best part of two decades, and had been adored the world over as a symbol of wealth, good taste and sense. The new car had to retain all these virtues, while bringing the SL brand kicking and screaming into the 1990s. Later models featured more toys, and in the smaller-engined models better weight distribution courtesy of a V6 – but the ones we like best at Mercedes Driver are pure original examples like the 1991 300SL we have here on test.

Despite the fact that – if anything – the ride is even better, the R129 was a more sporting SL than its predecessor. It’s less like a two-door saloon with the roof cut off, despite the fact that under its svelte body lies the cut-down platform, essentially, of a W124 300E. Perhaps this shows how far forward saloon car technology had developed in two decades? Regardless, it ensures that the R129 still feels modern in 2018.

SL60 values, needless to say, outstrip standard models by a considerable margin… R129 values in general are firming up after years seen as the “cheap one”, as R107 values rise to meet Pagoda prices, the R129 has become the car for investors to buy now and save for later. As demand becomes greater, inevitably values will rise further.

How does it drive?

It’s a world apart from the R107 – and you can see how those late R107 buyers in 1989 might have felt a little short-changed had they the chance to experience an R129. There are clear hints of the W140 S class in here, most notably the offset centre vents, complete with miniature stowage box atop them. And behind the wheel, again it feels very like its saloon counterparts – yet while the architecture is W124 derived, it doesn’t share the 300E’s nose-heaviness. This is a far better balanced car than the 300E, and leagues ahead of the R107 in agility. Its wider track means that it can corner flatter, while retaining the smoothness of the older car over bumps. The steering feels slightly sharper too – not to the point of becoming sporting, but just enough to feel as if progress has been made over the earlier car. And while our test car loses two cylinders to the R107’s eight, somehow the straight six feels more appropriate in here. It’s a smooth operator…

We love both the R107 and R129 here at Mercedes Driver – but if we could only take one of this pair home we’d be taking the R129. It’s not that the R107 is a bad car by any means, but it feels its age in this company. It’s undeniably a product of the early 1970s, even though it’s an excellent example of its era – where the R129 feels decades ahead. The later R129s feel even more up to date, but we prefer the elegant simplicity of this early example – the non airbag steering wheel, the analogue trip and odometer, and numerous other touches just make it feel a little bit more special. And while we might hesitate to use a really nice R107 on a daily basis, even the best R129s are unlikely to suffer too badly from regular use.

Pre-1985 cars can suffer with quite horrific rust; something rectified by the introduction of a galvanisation process on later models. Check the scuttle panel and the heater box, as these are particularly worrisome areas to find corrosion and are R107 trouble spots. Rust can also form around the ABS pump mountings on the right chassis leg.

Drain holes can clog and turn the drains into water traps; likewise the sills can be afflicted. Othereise most body issues are likely to be cosmetic; stone chips can lead to unsightly blemishing around the nose, while dings and dents may have been rectified poorly during the R107’s long phase of relative bangerdom. It’s only now these cars are appreciating that they are receiving the sort of care they deserve – so ensure your purchase isn’t full of filler or coated with poor paintwork. Suspension bushes wear, and few cars have had replacements. Check the subframe bushes, as these can often be responsible for what feels like a snatching gearbox as you select R or D.

The SL is one of the models afflicted by Mercedes’ 1990s biodegradable wiring loom issues. Cars built from 1992-1996 can suffer from degraded looms, so it’s worth checking that there’s a bill in the history file for a replacement. Instrument clusters can also fail leading to dead instruments, but they can be easily repaired by specialists and so shouldn’t put you off the right example. Check for rust under the “Sacco panels” on the sides, these plastic cladding panels can act as water and mud traps and rot can fester away behind them unseen for months.

Again, bonnets and front bumpers can suffer badly from stone chips, so check that the paint here matches the rest of the car. While R129s are still cheap, many suffer the indignity of substandard paintwork and it will cost to have it re-done properly.

R129s are also known for electrical issues, notably in the hood mechanisms. The cars are technological powerhouses, with scores of ECUs and control modules which can fail. Many of these are located behind the front seats, so check here for any signs of water ingress or similar damage which might indicate imminent issues. It goes without saying that you should check that all the electrical kit functions properly.

Thanks Our thanks to Hilton and Moss for supplying the 350SL and 300SL used in our photographs, and for the buying advice on these pages. Hilton and Moss can be contacted on 01279813907, or via www. hiltonandmoss.com.