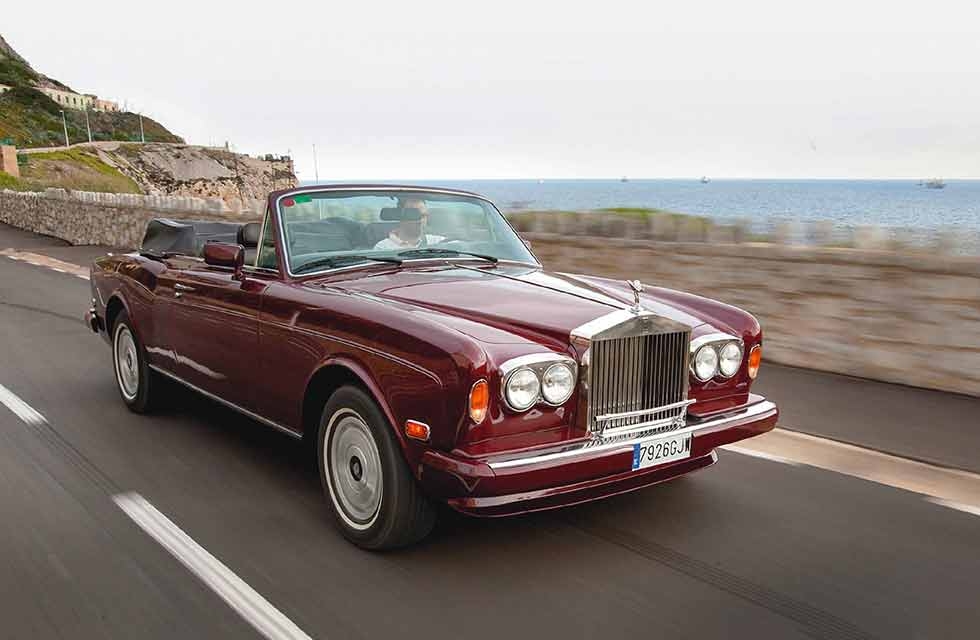 Corniche cruiser experiencing the ultimate in open­top opulence. When one lucky contributor is offered a day at the wheel of a 1978 Corniche convertible in the glorious setting of Gibraltar, it turns into a memorable experience… Words: Ivan Ostroff. Photography: Patrik Lindgren.

When a regular visitor to Gibraltar was offered a chance to get behind the wheel of a Corniche convertible, he was hardly likely to refuse. It turned out to be a day to remember…

Gibraltar, the British Overseas Territory located at the very tip of the Iberian Peninsula, needs little introduction. It has been under British rule since 1736 and covers an area of barely 2.6 square miles. It’s somewhere I have been visiting for a number of years and is a place I absolutely adore. Quite frankly, Gibraltar is almost more British than Britain itself. So when I was given an opportunity to drive a Rolls Royce Corniche around the Rock for a day, I didn’t hesitate. Gibraltar would surely be the ideal location for experiencing the ultimate in classic British convertibles.

“The apes of Gibraltar are famous for their thieving ways, and I didn’t want to take any chances”

The Corniche was, of course, the longest-lived member of the Silver Shadow family, officially launched in 1971 but essentially the same design as the Mulliner Park Ward two-door that had first appeared five years earlier. In convertible guise, the Corniche remained on sale right through to 1995, by which time it had become the proverbial ‘classic in its own lifetime’. The car I was being allowed to drive, however, was a 1978 Corniche convertible – a splendid example with just 75,000 miles under its wheels.

On the appointed day, Robert Dunn – the Corniche’s proud owner – drove his Rolls-Royce along the Costa del Sol to La Linea, crossed the border into Gibraltar and parked it at the airport, from where I would collect it. As I slid behind the wheel, having first admired the immaculate Mulliner Park Ward coachwork finished in eye- catching Regal Red, I knew I’d entered a wonderful world of quality and tradition. The interior of the Corniche felt ‘just right’, from its black leather seats with their red piping to its abundance of burr walnut veneer. This was going to be an experience to savour.

As I twisted the key, I was aware that the classic 6.75-litre V8 was running… but only just, such was its smoothness and refinement. Having adjusted the driver’s seat to suit my frame, I released the parking brake, moved the steering column-mounted gear selector to ‘D’ and, with a gentle push on the throttle, we were gliding out of the car park and on to the main road. Bizarrely, the road crosses the main Gibraltar Airport runway, with red lights enforcing a stop for a few minutes whilst a British Airways flight from Heathrow touches down – and then we were free. Whilst waiting, however, I took the opportunity to lower the Corniche’s roof, enabling me to properly enjoy the Gibraltar sunshine.

Once across the airport, I turned left at the Sun Dial roundabout at the top of Winston Churchill Avenue and proceeded along Devil’s Tower Road. With the airport now on my left and the famous Rock of Gibraltar towering aloft to my right, I pointed the Corniche east for half a mile before negotiating the right hand bend close to the sea. The Rolls-Royce cornered well and with confidence, with the suspension resettling itself before we wafted along Sir Herbert Miles Road, which runs parallel with the coast.

Just before Catalan Bay village, I braked hard and turned sharp left, down the steep ramp into the car park that overlooks the bay. I parked up and got out of the car for a look around; this is one of my favourite spots on Gibraltar and has hardly changed over the last forty years. Like the white facade of the Caleta Hotel rising against the Rock in the background, the Rolls-Royce Corniche looked a picture of colonial elegance.

Back behind the wheel again, we headed past Little Bay and entered Dudley Ward Tunnel, one of just three tunnels where the public roads pass through the Rock itself. Not many people are aware, however, that within the Rock are another 34 miles of tunnels, which during World War II housed three fully functioning hospitals and could have provided shelter for up to 16,000 personnel, complete with equipment and supplies. During the Cold War period, plans were in place for the inhabitants of Gibraltar to be sheltered inside the Rock in the event of a nuclear attack, and the tunnel network was regularly expanded by the Ministry of Defence right up until 1968.

Emerging from the dark of the Dudley Ward Tunnel into the bright sunlight once again, I blinked momentarily while my vision readjusted, before letting the Corniche gather speed as it headed down the hill towards Europa Point. I looked out over the sea across the Strait of Gibraltar and could clearly see Morocco, less than nine miles away, before passing the lighthouse and heading north. I could have stopped again in order to take in the spectacular views at Europa Point but I didn’t want to miss a single moment experiencing one of my all-time favourite Rolls-Royce models in what to me was the perfect setting.

As I climbed the winding Europa Road around the east side of the Rock, a small amount of pressure on the accelerator released an abundance of power, with the Corniche’s famously unconfirmed output of around 256bhp guaranteeing an effortless surge of acceleration. With a corner looming, however, I then braked hard to check the car’s progress before taking what is a very sharp right, up the road that leads to the top of the Rock. Close to the entrance of St Michaels Cave, I pulled over for another photo opportunity as well as to visit the monument reminding people that Gibraltar is famous for being one of the two Pillars of Hercules.

No driving experience of Gibraltar would be complete without seeing its famous apes (or Barbary macaques, to give them their proper title), the only wild monkeys populating the European continent – and it’s at this point that I decided to raise the roof in order to secure the car. The apes of Gibraltar are famous for their thieving ways, and I didn’t want to take any chances with the immaculate interior of a borrowed Rolls-Royce. It was Winston Churchill who once said that the apes will remain there as long as the Rock is British, and these days they’re still prolific – with numbers actually on the increase. Indeed, the apes remain a popular Gibraltar attraction for most tourists, although as we were keen to avoid any damage to the Corniche we continued on our tour, heading towards the main town.

Although many of the hills are extremely steep in Gibraltar, the brakes of the Corniche took even the trickiest in their stride. Driving past the colonial looking Rock Hotel and straight through the town area, we stopped the car to lower its roof once again before turning the car towards Queensway – at the end of which I twisted the steering wheel to almost full lock around a tiny roundabout, before peeling off up the hill and through the Ragged Staff Gates that still stand as part of the original sea defence walls, dating back to 1736 and allowing access to the quays.

A tickle of the throttle then had the Corniche swishing along Line Wall Road, heading back towards Winston Churchill Avenue before looping off left around the Sun Dial towards Marina Bay. By then I was feeling somewhat peckish and so decided to call in for a late lunch at Bianca’s Restaurant, an excellent establishment run by good friend and fellow car enthusiast Patrick Francis. He kindly agreed for me to park the Corniche outside his restaurant on the quay, allowing me to keep an eye on it whilst I indulged in a welcome pizza.

All good things must come to an end, of course, and so after downing my second cappuccino I climbed aboard the Corniche once again. During my drive back towards the airport over North Front, I delighted in the smooth refinement of the Rolls-Royce, its low-mileage V8 sounding more like a softly humming sewing machine at low revs rather than a powerplant capable of endowing such a weighty machine with decent pace. I’ve long been an admirer of the classic L-series V8, yet it seemed particularly at home in the Corniche – especially when cruising around one of my favourite locations, with the roof lowered and sunshine of Gibraltar making its presence felt.

My day at the wheel of a forty-year-old Corniche convertible had been a unique opportunity to drive a truly delightful motor car, and as I glanced in the rear view mirror I realised I was wearing a silly grin that spread from ear to ear. It’s usually at this point that I ask myself whether the car in question is one that I would actually enjoy owning, but this time there was no need. Cruising around Gibraltar in top-down luxury was a truly rewarding experience – and one that I won’t forget in a hurry.

THANK YOU The author would like to thank proud owner Robert Dunn for the loan of his splendid Rolls-Royce Corniche for the day.

“The road crosses the main runway, with red lights enforcing a stop whilst a British Airways flight touches down”

This 75,000-mile Corniche’s interior is very well preserved. The views across the Strait of Gibraltar are sure to impress any first-time visitor. The Rock of Gibraltar’s 34 miles of tunnels housed hospitals during World War II. The famous Ragged Staff Gates date back to 1736. The inevitable dusty engine bay of a dry-climate Corniche. A chance for Ivan to enjoy lunch in style.