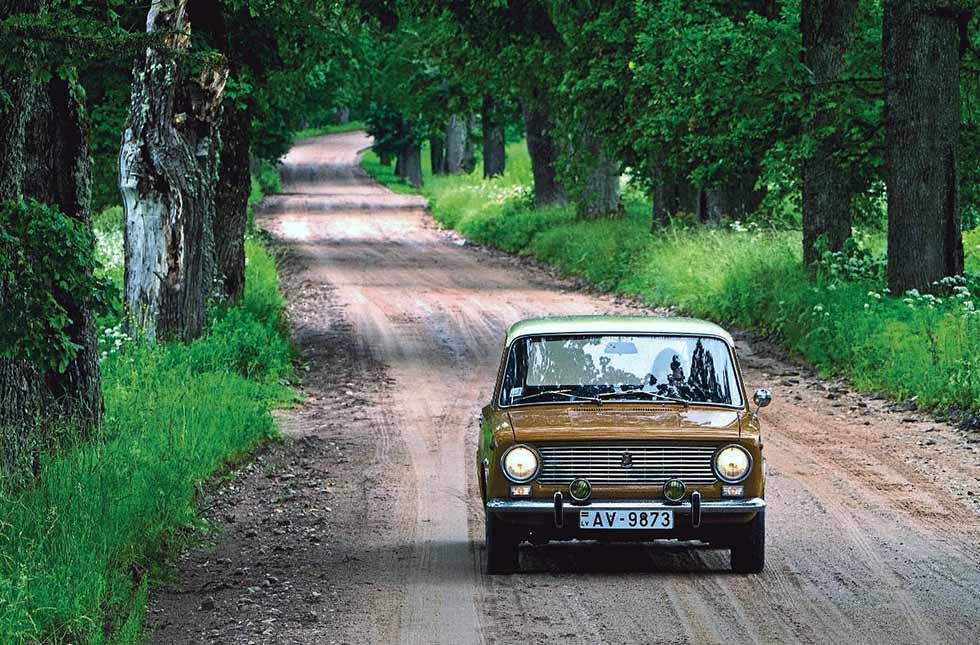 See The Baltic. After more than 40 years, Lada has ceased production of its boxy Fiat 124-based model. We went in search of survivors in Latvia and Estonia. Words and photography Martyn Goddard.

BALTIC BY LADA / CELEBRATING LADA  40 years of production ends. Time for a Baltic tour – by Lada

After a run of more than 18 million boxy, Fiat 124-shaped Ladas, Avto VAZ closed the production line at its Izhevsk Plant in April. Remember them? Eighteen million of the things, and most Brits aren’t even a little bit nostalgic. But somebody in Latvia is. Somebody there collects them. And I’d long planned a trip to the Baltic States.

Latvia was a Soviet satellite state until the Singing Revolution freed it (along with neighbouring Estonia and Lithuania) in 1991. Back then, Ladas were the wheels of choice (or lack of it); the brothers Martins and Karlis Dambergs still love them and own ten, er, ‘classic’ 2101 models, including a rally version in which they tour Europe competing in classic events. Their collection is housed in the Kalnciema Quarter of Riga, a UNESCO World Heritage site, the restoration and upkeep of which the Dambergs’ joinery business has largely been responsible for – the classical 18th- and 19th-century architecture is executed in wood, and survives in a proliferation seen nowhere else on the Continent. The area hosts markets, cultural events and restaurants. It couldn’t be further removed from the old Eastern Bloc days.

The Lada collection sprang from cheap transport provided for the Dambergs’ carpenters but soon the brothers were being offered good examples from ex-Soviet military personnel retired in Latvia. They guide me to a two-tone cappuccino 1978 1200 Combi that’s been restored and upgraded with a five-speed gearbox and central locking, though the seats are still milk chocolate vinyl and there’s no radio or head restraints. It’s basic in here, and we’re soon bumping over the cobbled streets en route to Riga’s market, which occupies a group of former Zeppelin hangars. It’s foodie heaven.

Riga was Imperial Russia’s Motown. Russo Baltic Wagon produced the empire’s first car, and the earliest example of production, a 1912 fire truck, is on display at Riga Motormuzeja – home of the USSR’s only classic car club, founded in the 1970s – on the outskirts of the city. It’s a striking 1980s building, designed by Latvian architect V Valgums. Highlights within include the 1938 Auto Union Type C/D re-creation and the Kremlin collection of state limousines from the Politburo.

Departing Riga for Kuldiga, the P128 road follows the coast through pine forests, where we stop at a small café for lunch. Sitting on the terrace with a group of young Russians (who think our choice of car is cool), we translate the Latvian menu using omelette as our starting point and bypass lager for apple juice – there are random police checks and a low drink-drive limit here. After our stop, the road turns inland and we pass rolling farmland, little traffic and even less signposting. By early evening, after we’ve climbed down to the river at Kuldiga to experience     Europe’s longest waterfall (the result of a failed attempt to create a canal from the Black Sea to the Baltic by Imperial Russia), we drive the Lada into the garden of our wooden guesthouse. It’s of traditional wooden construction, again restored by the Dambergs brothers. And it’s very much not a reminder of the Cold War.

After our overnight stay, the Lada starts with a little choke and, once warmed up, cruises steadily along the country roads at the national limit of 90km/h. Acceleration is gentle, steering vague and the ride firm, though the view of the Latvian countryside through the thin-pillared panoramic windscreen is uninterrupted. I spot a Retroauto Museum sign nailed to a tree and pull up in front of a barn to meet Edgars Gasuns, who smiles at our mode of transport. We’re given a guided tour of his collection, which includes pre-WW2 cars such as Horch, BMW and Opel, plus various   Soviet-clone   motorcycles   and   scooters.   Using   my admittedly patchy German, I gather they’ve all been restored over 30 years in a lean-to shed at the back of the barn.

Then it’s a 150km drive north to the Karla Muiza country hotel, diverting to Ligatne in the Gauja national park to cross the Gauja River by hand-operated ferry, before descending into a preserved Soviet bunker with the codename Boarding House (see photo, previous page, with the head of Lenin). It’s located under a former sanitarium; sinister and outdated even when it was just built, the place now focuses the mind on less liberal times.

The gravel road to the hotel is interesting even at 80km/h as the Lada lets go at the rear with a rooster-tail of dust; it feels like driving a forest rally stage! Baiba Stepina welcomes us with a meal of hearty soup and meatballs, before a tour of the meadow, sauna and then the local stork family nesting on the power lines. Next morning the dirt road to Cesis is slick and pockmarked, with deep puddles left by overnight rain, but our Shiguli (the Baltic brand name for our Lada) ploughs through thanks to its generous ground clearance – Ladas were also built from heavier- gauge steel than had been the case with the Fiat 124 that sired them; both measures all the better to survive rough roads and Siberian winters. Fiat sold the Italian Togliatti production line to the Soviets in 1966 and the town around the new factory was renamed Togliattigrad. And while the cars were exported as cheap transport around much of the rest of the world, their toughness and basic DIY nature endeared them to many.

Locals had recommended Braslas Krogs, a tavern on the A3, where we sample traditional Latvian cuisine; fried pork ribs, mashed potatoes and fresh sauerkraut with onions don’t disappoint. It’s a short drive from here to Birinu Pils, a pink neo-Gothic castle that sits by a lake like a giant wedding cake. Our room is palatial. This is proper imperial grandeur.

Via Baltica (or Euro-route E67) heads north and, as we cross into Estonia, the roadsigns improve but there’s more truck traffic, so I’m thankful to head into Tallinn via a country road. The five- star Telegraaf Hotel in Old Tallinn was once the telephone exchange but has since played host to Bob Dylan and Rod Stewart. The porters raise their eyebrows at our little estate car; it’s like turning up at The Ritz in a Morris Marina.

The old city is a gem, full of medieval architecture, and retains a wonderful mix of shops and cafés. If you avoid the tourist streets it’s an undiluted delight. The nAnO restaurant has a bohemian atmosphere, run by a former model turned chef.

Once the capital is left behind, the traffic soon evaporates on Highway 9, which crosses the utterly flat landscape to Haapsalu. There we come across the grand railway station, now a museum, built in 1905 to receive Tsar Nicolas II. The buildings in the centre of Haapsalu have a distinctly Swedish feel, which dates from the occupation for 200 years from 1510. Leaving the town via narrow streets of wooden houses painted in pastel colours, we make for our overnight stop 20km into the countryside, the Altmoisa Guesthouse. It’s busy (the town is expecting 2000 people to attend the annual strawberry festival), so we forage for wild strawberries along the marshy coastal paths nearby.

After 900 miles on vinyl seats we take a rest day in the spa town of Parnu. Sea-bathing began here in 1838, and Estonia’s answer to Normandy’s Deauville has large Art Nouveau villas nestling in the pine trees, including our hotel, the Ammende Villa. The film festival is in full swing, there’s a kite-surfing competition on the men’s beach, it’s 31″C, and I’m sipping cool beer while reflecting on the Lada. A lot of Brits must have liked them because in 1988 the importer shifted 33,000 cars. That was 2% of the UK market.

Heading south back to Riga on the Via Baltica through a thunderstorm, I take a call from Martins Dambergs, who suggests ending the trip at the old BKSB race circuit for some classic Lada and Volga racing on a track that dates back to 1966. It’s run by the Riga motor museum and we arrive at the paddock in the middle of a drivers’ meeting, surrounded by mechanics tuning 1960s Volgas that look like scaled-down Ford Galaxie 500s.

What the event lacks in spectator numbers is made up by the fervour of the 25 Volgas in the headline race, which is followed by a Lada 12-lapper, all part of a series held in Russia and the Baltic States for 1960s Eastern Bloc saloons. Who’d have thought?

It’s time for this Lada to pass gently through the Art Nouveau streets of Riga back to the Kalnciema Quarter. It has performed faultlessly. The restrained yet pretty scenery of these two Baltic States has impressed too, though not as much as the friendly welcome of the people we met and the quality of the cuisine and hostelries en route.

Clockwise from above Volgas do battle at BKSB circuit; Retroauto’s Edgars Gasuns in his restoration workshop; neo-Gothic Birinu Pils; Parnu on the Baltic coast; the beautiful Telegraaf Hotel in Old Tallinn.