If the mere thought of a Toyota Prius brings you out in a rash (we sincerely hope it does), then this mid-1970s Porsche is the antidote you’re after. No, not because it pumps out more greenhouse gasses than a herd of flatulent beef steers, but because it emits nothing worse than the whine of a powerful electric motor. The story of this unique all-electric Porsche began when Joseph and Rhonda Gaudino contacted Steven Pisano at Sunshine State Restorations (SSR) in Tallahassee, Florida, about a rather special project. The Gaudinos’ dream was to prove it was possible to build a desirable, high-performance, electric car that required neither hundreds of millions in development money, nor Silicon Valley geekery to become a reality. Put simply, they wanted a plug-in driver’s car that would free them from the filling station, and provide inspiration for other imaginative car enthusiasts to do the same. 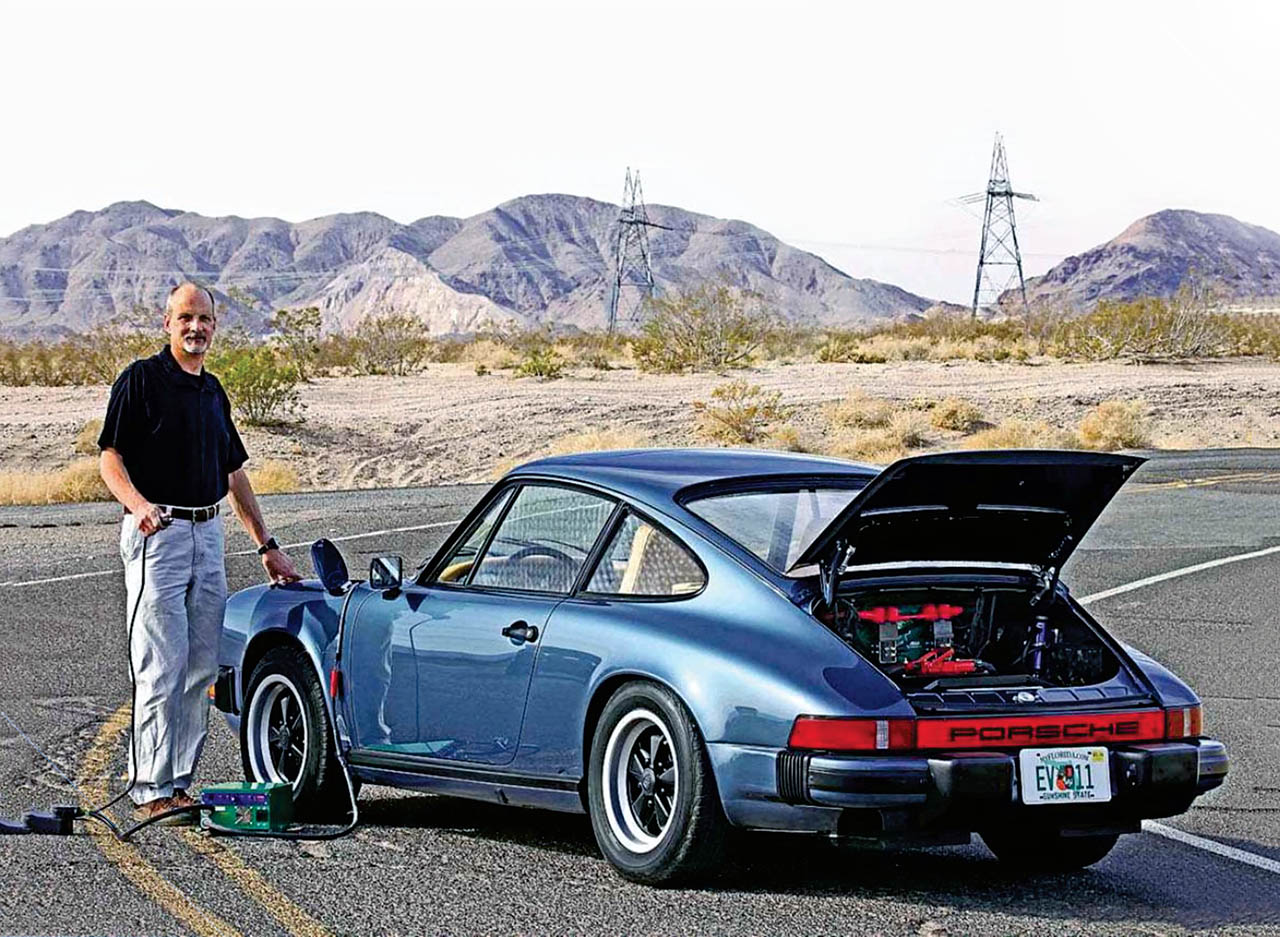 When the Gaudinos located a tidy 1976 Porsche 912E, they knew they had found the ideal basis for their project. Inherently light, aerodynamic and significantly cheaper than the 911 with which it shares its good looks and structural underpinnings, the humble 912 was the perfect starting point for the Gaudinos’ vision of an iconic classic endowed with 21st century propulsion.

Although Pisano (pictured, right) and SSR had plenty of traditional restoration experience, the company had never built an electric car before. Undaunted by the challenge and buoyed by the Gaudinos’ enthusiasm, the first major task for Pisano and his team was to identify and source the powertrain and batteries. After much research – and a list of components that sound more suited to a sci-fi movie than a 35-year-old Porsche-the combination of a NetGain Warp11 DC electric motor, Cafe Electric Zilla2K control system (as used by the gobsmacking KillaCycle’ electric drag racing team), and no fewer than 85 3.3-volt lithium-ion batteries (at a cost of $20,000!) were chosen as the best off-the-shelf powertrain for the task.

With each battery weighing just over 3 kg, the electric power pack is hefty to say the least. You then have to add the motor, control system and cabling but, because the old petrol engine was removed, the overall weight penalty isn’t as bad as you might expect. Pisano reckons the total gain is 258kg, bringing the all-up weight to almost 1350kg. With 320 electric horsepower to propel it, and the uniquely immediate torque characteristics of an electric motor to hoof it off the line, the 911E – it changed names when the old four-cylinder motor was removed – promises a decidedly un-1976 power-to-weight ratio and acceleration.

Below Front luggage compartment makes way for battery storage – and improves weight distribution as a result. 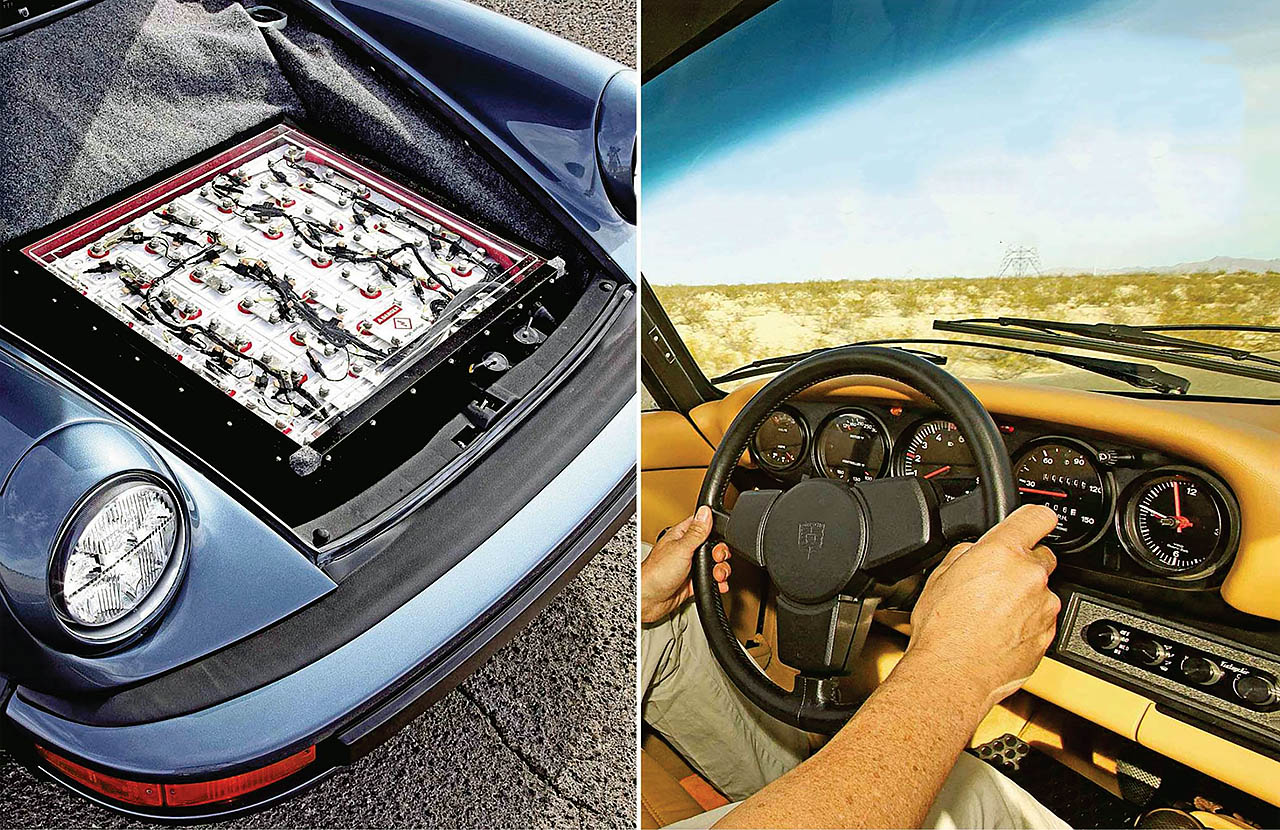 With the propulsion system decided, the more conventional task of restoring the ageing Porsche could commence, not to mention the extensive re-design and fabrication required to house the new motor and battery packs. For Pisano and his clients it was vital that the Porsche looked as stock as possible from the outside. Fortunately the rear-engined Porsche’s packaging lent itself perfectly to housing all the batteries.

Freed from the conventional 911 constraints of having all the weight hung out over the rear axle, Pisano and his team endeavoured to distribute it as evenly as possible. To do this they located 39 of the 85 batteries in the front luggage compartment, a further dozen where the rear seats would normally be found, and the remaining 34 batteries – divided into two packs of 17 – flanking the electric motor in the rear engine compartment.

With the electric powertrain safely installed, Pisano could concentrate on making the car look as good, and as standard, as possible. The body was sprayed in environmentally friendly BASF Glasurit paint, then hand-polished to a perfect finish, while Lesch Design trimmed the interior with leather, doing a brilliant job of concealing the cables that run fore and aft through the cockpit.

The neatest detailing – apart from the amusing ‘911E’ badge that sits on the tail – comes in the form of the car’s dashboard gauges. Refurbished by North Hollywood Speedometer to match the look of the original VDO dials, they wear new markings suitable for the electric motor’s redline, plus system voltage and current flow and the temperatures of the motor and power controller. It’s a neat job and typical of SSR and the Gaudinos’ attention to detail.

There was one more challenge left for Pisano to overcome, and that was to create and install a climate control system. No, the 912 didn’t come with air-conditioning in 1976, but the 911E is intended as a daily driver and clearly needed something to combat the heat of a Floridian summer. The tech guys at SSR quickly settled upon a fully electric system, as this eliminated any mechanical losses and had a minimal impact on range and efficiency. The problem was that they had to source components from multiple suppliers, which created something of a headache when it came to integrating them seamlessly into the car. They did and it works a treat.

So what does the 911E feel like to drive? According to Pisano it’s very rapid, slightly spooky and hugely entertaining.

The unnerving thing about the car is when you come to a stop and you hear nothing. It’s like you’ve stalled. When I first drove the car in traffic I wondered if it would move when the lights went green! We haven’t kicked any Corvette butt yet; however, once the battery pack is seasoned (that’s electric geek-speak for what we petrolheads call run-in’) we’re going to hit a local private airstrip to do some testing against other cars. As low-end torque is what electric motors are best known for, we expect that the 911E will be hard to beat at 0-60mph runs.’ 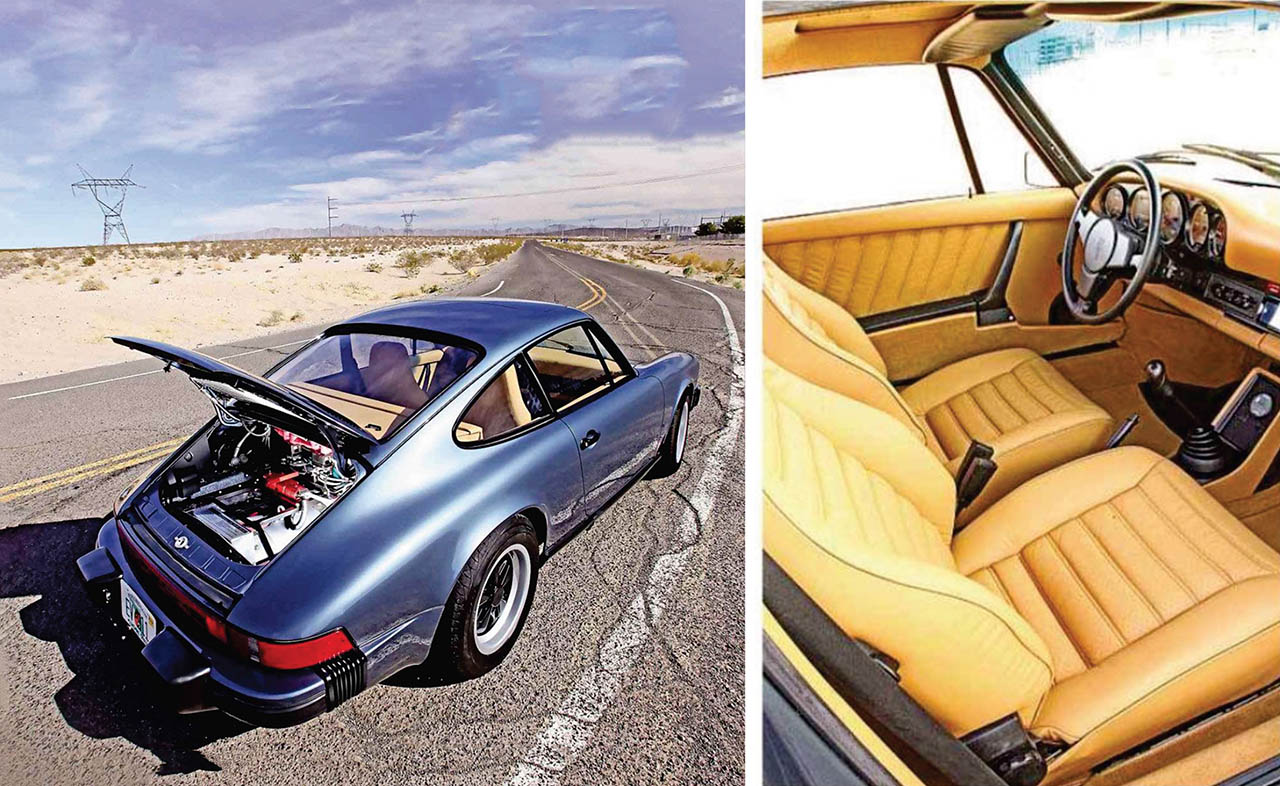 That’s all good. But does it feel like a 911? Although we’ve shifted the weight distribution it still feels like a Porsche, which is important. I suppose you could say it feels more centered now. We’ve done some development work on the suspension, so now the car is running Bilstein sports dampers and significantly thicker anti-roll bars to control the extra weight. It sits and drives like a standard car, but we’re having so much fun with it we’re out-driving the brakes! We need to seriously think about a big brake kit.’

Like all electric cars the 911E’s one limiting factor is range, but as the objective was to build a car that would perform the dual function of everyday runabout and weekend toy, the Gaudinos didn’t actually need a car that could cover hundreds of miles between plug-ins. In tests the 911E has reliably completed 40-50 mile runs, which consumed approximately 40% of the available battery power and took less than three hours of charging to replenish. Based on that, Pisano confidently predicts the 911E will cover 100 miles at 65mph or so, and will easily recharge during the time you’d be at work in the office, or asleep in bed.

It goes without saying that developing an electric car of this high capability from scratch was a huge and enormously time consuming challenge. Factor-in a classic car restoration as well and there’s no doubt the Gaudinos’ investment in the 911E project was considerable. Exactly how many dollars I’m not at liberty to say but, if you were to use the US price of a certain well-known electric sports car as your context, this amazing fusion of classic style and modern technology remains impressive value. Better still, with the R&D now complete, if Pisano and SSR were to build another 911E it would take a fraction of the time.

Thanks to 911 Classic Drive-My Club

So what of the future? Not surprisingly, having successfully scaled such a steep learning curve, Pisano and SSR have big plans. Plans that could involve another Porsche…

I have been talking with another customer about building a pre-1973 911. If this project develops I will be working with the REMY team to build an AC car using all of their latest components. REMY is a major player in the OEM hybrid market, and with access to its engineering team I can get all the help need, as far as the design of the motor and drivetrain is concerned. It’s the ultimate opportunity and will allow me to move to the next level.’

Whatever you think of the growing socio-political pressure to embrace so-called green’ cars, there’s something truly inspiring about the Gaudinos’ vision and Pisano’s efforts to make it reality, for it proves enthusiasts will always find a way of expressing their love of cars and driving. This 911E is an extreme example of this passion, but it also proves the future needn’t be Prius-shaped. And that has to be a good thing. Messrs Gaudino and Pisano, Octane salutes you!

‘With 320 horsepower and the electric motor’s uniquely immediate torque characteristics to hoof it off the line, the 911E promises decidedly un-1976 acceleration’