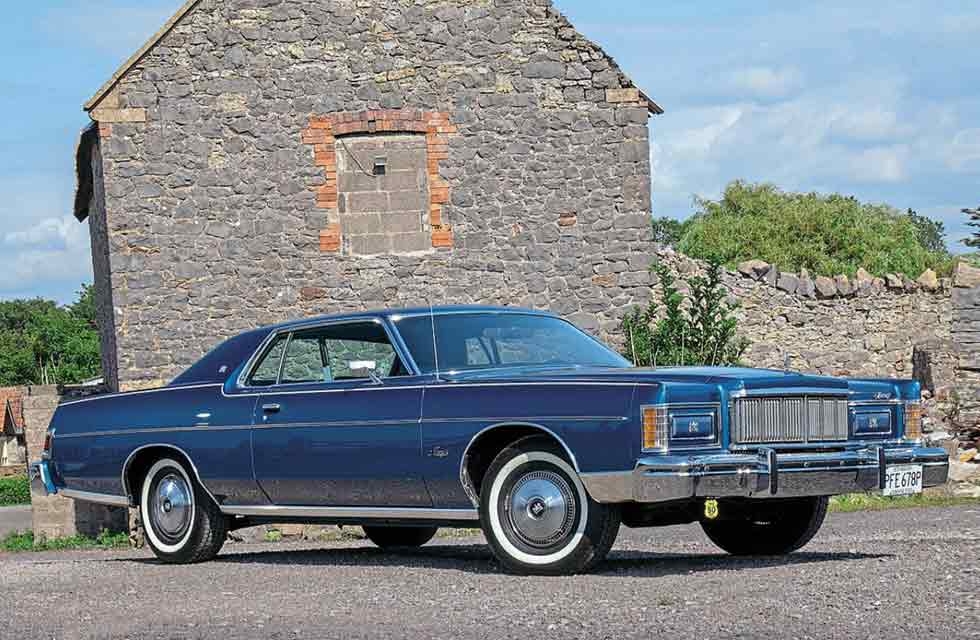 Andy Green’s 1976 Mercury Marquis is a low-mileage and very original example of how even the base model cars were luxurious in the Seventies. Words: Mike Renaut. Photography: Matt Richardson.

ACE OF BASE 1976 Mercury Marquis

Sometimes you look at a car and it just stands out. Such a car is Andy Green’s 1976 Mercury Marquis coupe. The colour is brilliant and it’s in such superb condition that I found myself wondering if it was a recent restoration. “The first owner bought it in South Dakota and had it for about 30 years,” explains Andy, “but I don’t know much about its history beyond that. I’ve tried writing to him but heard nothing back. I’m sure it’s been repainted, but I suspect the rest is original.” Andy recently paid for a vehicle history report, but didn’t learn anything beyond that the car was retitled in Florida in 2015.

“I bought the Mercury from MJC Classics in November 2018, a Florida-based dealer who only buys low-mileage cars; it currently has 53,000 on the clock. I imported it via Kingstown Shipping (01482 374116/www.kingstown-shipping.co.uk) in December 2018. I’ve used them three times now, each time getting the cars containerised and shipped into Felixstowe. “I had my eye on the Mercury for eight months and kept returning to the dealer’s website to look at it,” admits Andy.

“I’d come home from work and look at the photos online. A friend had previously shipped in a couple of Marquis to sell on and there was just something about the front end of those cars I loved, the hidden headlights particularly just appeal. “My first American car was a 1956 Packard Clipper Super two-door hardtop about 20 years ago. I got into cars through my dad. When I was about 12 he used to buy Exchange & Mart and I’d look at all the car photos.” Andy’s garage is currently also home to a 1957 Cadillac Sedan deVille and he’s previously owned a ‘54 Chevy 3100 pick-up. He sold a nice ‘65 Thunderbird to buy the Mercury.

“A car’s colour is vitally important to me and I loved this blue. A friend in the States had inspected the Mercury for me and it sounded perfect. I’m a bit of a purist; I like to keep my cars original and this one seemed to have been looked after and not messed about.

“The seller gave me the option of fitting a half vinyl roof for $1400, but I didn’t want to change or potentially ruin the car. It came with a set of wire wheel covers which I use during the summer months and I keep the standard covers on for winter.” Being sticklers for originality ourselves at Classic American, as soon as we arrived for the photoshoot we made Andy swap the wheel covers over in his hot garage – sorry again, Andy!

The Mercury Marquis model line was essentially Mercury division’s posher version of the Ford LTD. The name was a title from French nobility and, fittingly, as time went on, Mercury’s Marquis also had a history of being cut down and replaced. Introduced in 1967 as the flagship full-size Mercury range above the Monterey, the Marquis was available as a two-door hardtop or four-door Brougham model, both with vinyl roof as standard. They lasted two years before a second-generation Mercury Marquis debuted, offered in a wider range of body styles which now included concealed headlights.

Following a tradition started in 1961, Mercury sedans had a slightly longer wheelbase; Marquis were built on a 124-inch wheelbase compared with the 121-inch wheelbase of Ford sedans and Ford/Mercury wagons. A typical 1970 Marquis Brougham four-door hardtop (of which 11,623 were built) cost $4500 and weighed two tons. Convertible models were dropped as the cars were given a facelift in 1971 with the entire grille now above the bumper. In 1973 four-door models received a new, sleeker roofline while the two-door’s revisions included larger side windows. Interior trim and seats were also changed and the dashboard redesigned.

Energy-absorbing 5mph bumpers debuted as passenger safety was becoming a prominent part of car design. In February 1973 a four-door Mercury test vehicle for the US government crashed on a Los Angeles freeway; the driver was completely uninjured thanks to a new device that had now been tested for the first time in the real world – the driver airbag.

Little beyond the grille changed for 1974 cars, above or below the surface. The suspension design had been carried over from the previous generation’s full-size range − a live rear axle and double wishbone independent front suspension with a stabiliser bar. There were coil springs on each corner and front disc brakes were standard, with drums on the rear. Options included ‘Sure- Track’ anti-lock braking from 1973, power front discs and four-wheel disc brakes from 1975.

After 1974 all full-size Mercury sedans took on the Marquis nameplate. The Grand Marquis was introduced in 1974 as an option package for the Marquis Brougham, then in ‘75 the Grand became top model above Marquis Brougham and Marquis. Pillarless four-door hardtops were gone and right across the full-size Ford, Mercury and Lincoln ranges, sales of full-size cars were recovering following the fuel crisis.

After the previous regular updates, Mercury’s full-size cars were little changed between 1975 and 1978. The three series of the Marquis range differed only in standard equipment. Items such as power windows, fender skirts, deluxe seatbelts or a vinyl roof which were standard on the Grand and Brougham were an option for the base model Marquis.

Introduced on October 3, 1975, the ‘76 Mercury line-up ranged from the Bobcat (Mercury’s Pinto) through compact Comets, ‘precision-sized’ Monarch and Montego, ‘sporty’ Cougar and top-of-the-range Marquis. It was a good year as sales rose 24%, especially among Monarch and Marquis, which sold 60% more cars than in 1975. A 1976 Marquis cost $5063 and a Grand Marquis $6439 when the average annual income was $16,000, the average house $43,400 and petrol sold for 56 cents a gallon. Mercury described its styling as “understated yet distinctive”. A Landau vinyl roof option was introduced for Brougham and Grand Marquis two-door cars, while all versions of the Marquis were marketed as ‘Ride-Engineered by Lincoln- Mercury’ as part of a promotion comparing their suspension quality against more expensive European sedans.

Ford was aware that General Motors was about to downsize its biggest cars and elected to keep the full-size 4400lb Marquis (the wagons topped 4800lb) in production until 1978.

However, for 1979 a third-generation Marquis appeared. The full-size Ford and Mercury models were 17 inches shorter and more than 1000lb lighter than the 1978 cars. For the first time since 1955 the full-size Mercury wagon weighed under 4000lb. Despite being smaller, the new Marquis had improved interior space over its predecessor, thanks to a taller roofline and redesigned seats.

A fourth-generation Marquis appeared in 1983 as a mid-size model to replace the Cougar sedan and station wagon. The radically downsized 1983 Marquis lost almost nine inches in wheelbase nearly 16 inches of length and as much as 900lb in weight. Ford was gradually moving its car platforms to front-wheel drive and the Marquis was discontinued after the 1986 model year, replaced by the Mercury Sable – Mercury’s version of the Ford Taurus.

Andy’s Marquis is one of 10,450 built for the 1976 model year. It’s hard to remember this glamorous machine is the base model, although it has manual windows – the handle takes four turns from open to closed – there’s power steering and brakes, the door locks are manual, as is the radio aerial and seat adjustment. The blue tinted glass and digital clock were standard, as were the disc front, drum rear brakes.

Andy discovered the remains of the build sheet under the front seat, so we can tell the Mercury rolled off the line at St Louis, Missouri, around late September of 1975. We found one under-bonnet component still date-stamped ‘Aug 75’ bearing this out. That paint colour is 3G with the somewhat oxymoronic name Bright Dark Blue.

Under the bonnet is the 400cu in V8 (which was actually 402 cubic inches) with a two-barrel carb designed for unleaded gas and a C6 three-speed column-mounted automatic. Evidently the year to go for was 1976, since they came with 180bhp, a 36 horsepower gain over the 1975 engine and 12 more than the 168bhp offered the following year.

Since Andy is a member of the pre-50 American Auto Club (www.pre50aac.com) and marshals for the club’s shows, the Mercury is kept busy attending various events throughout the year. “People keep asking to buy it, one guy had even seen it for sale in Florida, but by then I’d already purchased it. I’ve really grown to like the Mercury; when I’m out in it, I just want to keep going,” laughs Andy. “Funnily enough, I used to hate 1970s cars, but then I drove a friend’s LTD Country Squire and then decided I really liked them. My future plans are to detail under the bonnet and replace some clips. There are a couple of rusty screws I’d like to swap too and I’ll perhaps replace the chrome for one of the wheel arch edges which looks a bit tired, but it really needs very little. I just feel privileged to have bought and own the car; after waiting so long I’m now really glad I did.”

400cu in V8 motor was rated at 180bhp. Dash is virtually identical to a Ford’s… …Apart from the ritzy ‘faux’ burr walnut.

Dash is virtually identical to a Ford’s… …Apart from the ritzy ‘faux’ burr walnut.