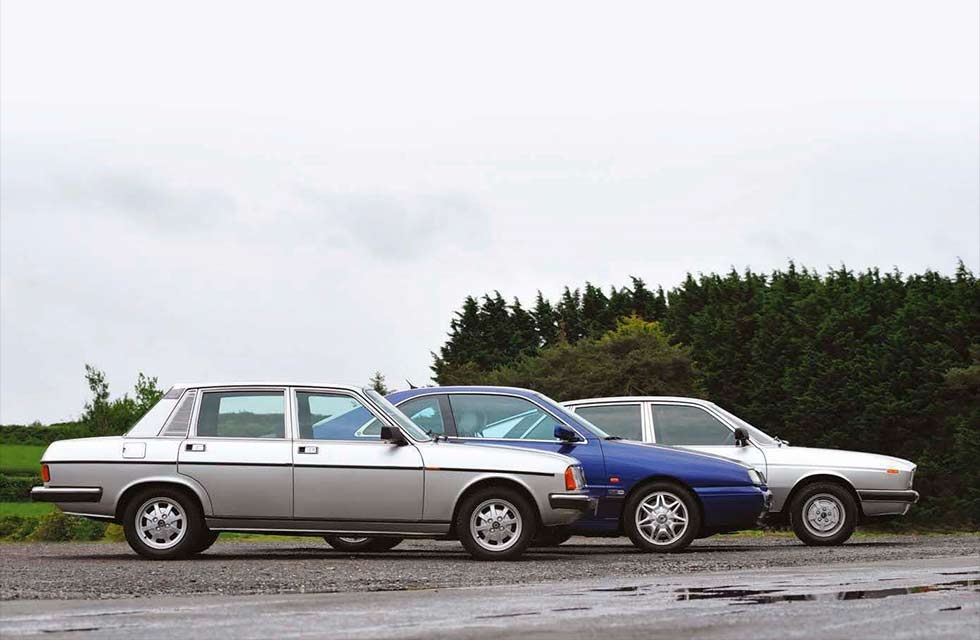 Man on a Mission – Three big Lancias from the 1970s, ’80s and ’90s. Patrick Hurst is a passionate collector, determined to save forgotten examples of one of Italy’s most illustrious marques. His trio of large Lancias includes one that’s never even been on the road. Story by Phil Ward. Photography by Michael Ward.

Patrick Hurst is a serial car collector and restorer living near Belfast in Northern Ireland. He is well known as an Alfa Romeo enthusiast, having owned more than 50 of them, including his very first car, an Alfasud TI, which he still has. Recently Patrick has turned his attention to Lancias, which he believes is a marque that is underappreciated and undervalued. Auto Italia has already featured some of his Lancias, including two Beta VX Coupes and his Thema 8.32.

What we’re in Northern Ireland to see this time, though, is a selection of three recent acquisitions: a Trevi 2000, a Gamma 2500 Saloon and a Kappa Coupe 2.0t. Patrick runs a restoration business called Originale Italiano and his team Greg and Gary have given the cars expert, detailed attention. Gathered together for the very first time for our feature shoot at Sketrick Island on the beautiful Strangford Lough, the weather was sadly awful. “That’s why Ireland is so green!” laughs Patrick. So what’s the story behind each of these Fiat-era Lancias, and what makes them special?

In the early 1970s, Fiat’s range of 124 saloons and coupes was getting long in the tooth, while the conservative 132 saloon looked dated from the outset. Having acquired Lancia in 1969, Fiat chose the brand to develop a new range of sporting coupes and saloons. The Lancia badge added an upmarket cachet to the range, boasting an edge over Fiat.

Former Lancia engineers were tasked to develop the Beta, and in 1972 the Beta saloon was launched. Fiat’s highly successful twin-cam engine was redeveloped and, for the first time, installed transversely to drive the front wheels. The new model was designed as a medium-size five-seater in two-box configuration. It looked like a hatchback, but it wasn’t.

About 195,000 Beta berlinas were built in three series. In 1979 the final series was introduced with the signature corporate front grille of the period (as adopted by the whole Beta range and the new Delta). The interior was dramatically revised and the Mario Bellini-designed controversial ‘gruyere’ cheese dash was introduced. Bellini was a prominent Italian designer noted for his work with chairs, tables, electronic office machinery and hi-fi equipment. He also attached his name to an upmarket limited edition all-black Fiat 132 saloon. Bellini’s Trevi dashboard is a clear case of form over function. Most of the 29 holes are dedicated to superfluous warning lights, while Lancia’s electrical department must have run out of ideas because two recesses are unused. The main instruments are where they should be, directly in front of the driver, nestling behind the oh-so-spindly lighting and washer stalks. The gauges have colours rather than graduations and, typical of Betas, are pretty optimistic.

It is said that Lancia recognised that the hatchback appearance of the Beta saloon met with some resistance among more conservative car buyers. As a result, in 1980 radical changes were made to the Beta with the introduction of the booted Trevi notchback version. Trevi is a contraction of ‘tre volumi’ (three box), rather than referring to the famous fountain in Rome.

The Trevi’s styling was carried out in association with Pininfarina. Quite what involvement Pininfarina had is uncertain, but there is a numbered plate in the engine compartment of Patrick’s example that records it as ‘Pininfarina 693 06168’.

The Beta title was dropped when the Trevi was launched in the UK in 1981. Two versions were available: 1.6 and 2.0-litre carburettor petrol. Eventually the 2000ie with the excellent Bosch fuel injection became available. A supercharged Volumex version was available in mainland Europe from 1982 (3844 built). The VX was not available in the UK although it is known that at least one right-hand drive version was built for the Italian Embassy in Pakistan and was imported into the UK. Does anyone know if it still exists? In 1984 Trevi production ended, some 40,628 examples having been built in all.

Partick’s 1982 Trevi 2000 was advertised by its Aberdeen then-owner on eBay with just 58,000 miles on the clock. Even though the car was in remarkable condition, it was still subjected to a complete Originale Italiano nut-and-bolt restoration, which included a bare shell repaint and a full engine rebuild. New parts were used throughout – hard to enough to locate even when the Beta was still in production, let alone today.

Like all of Patrick’s cars, the Trevi drives very well and its lusty 2.0-litre carburettor-fed twin-cam has that attractive, characteristic burble. The Trevi has an air of elegance and quality about it and perhaps its styling has matured over time. Often overlooked, this Trevi was well worth preserving as a usable, extremely rare modern classic.

The Lancia Gamma is something of an enigma. The model was intended to be a replacement for the Flavia 2000 and was a long time in gestation, following an abortive attempt at a co-operative arrangement with Citroën.

The Gamma is 100% a Lancia but it was not launched until 1976, seven years after Fiat took control of the company and four years after the all-new Fiat/Lancia Beta saloon arrived. The Gamma Berlina was designed by Aldo Bravarone (of Dino 206 fame) and built by Pininfarina, its fastback styling bearing a certain resemblance to the Centro Stile-designed Beta saloon.

The Gamma range would also replace Fiat’s logo-penalised 130 as a luxury product, and indeed the 130’s Lampredi-designed V6 was a likely candidate as the power unit. However, the bizarre decision was taken to build a Lancia Flavia-derived flat-four engine in two sizes (2.0 and 2.5 litres). The flat-four definitely felt out of context as a form of propulsion for a luxury car. Remarkably, 15,272 buyers were found for the Gamma Berlina and just 6790 for the better-looking Gamma Coupe.

Despite the Gamma being something of a curiosity, Patrick Hurst’s attention was drawn to the discovery of an unused and unregistered example in northern Italy. This Berlina is one of those mysterious cars that has been stored out of sight for many years, in fact in this case since it was new in 1976.

The story goes that it was allegedly ordered for a British diplomat in Milan, hence why it’s right-hand drive. For whatever reason – and who knows, it might even have been sinister, given Italy’s politics in the 1970s – the diplomat never collected the car. It eventually surfaced when the car dealership in Cuneo, where the Gamma had been stored, went into receivership. The untouched car was discovered in the back of the workshop covered in 40 years of dust. Because the ownership title could not be verified, the car was put up for auction by the official receiver. Partick’s ‘man’ in Italy was immediately put on the case and eventually the car found its way to Northern Ireland.

Finding a dry-stored classic car with just 16 miles on the clock is an enthusiast’s dream. However, this Lancia was holding a secret – no, not a body in the boot, but something very surprising under the bonnet. UK-spec Gammas were all fitted with 2.5-litre engines, while the Italian market got ‘tax-break’ 2.0-litre. During Patrick’s recommissioning, it was discovered that the engine number had been tampered with in an attempt to disguise the fact that a 2.0-litre engine had been substituted, and a clapped-out one at that!

A replacement 2.5-litre engine was duly sourced and rebuilt. Not content with just a new engine, Patrick elected to strip down the whole Gamma to a bare shell and have it repainted. The result is almost without doubt the best Gamma Berlina in the world.

We love the typical Lancia engineering touches, in particular the window in the bootlid to aid reversing, complete with a hinged louvre to assist in cleaning the glass. Another nice touch is the fuel filler hidden behind the air vent, just aft of the rear passenger’s window. And why would you need five bulbs in the interior light fitting?

Patrick’s Gamma has never knowingly been out in the rain since it was incarcerated in 1976. Ironically, we managed to pick one of the worst possible days for our photo shoot in weather terms – not untypical for Northern Ireland but possibly the first rain the Gamma had ever witnessed. Not only that, but the Gamma had not been driven on the road since restoration. But none of this seemed to phase Patrick who was quite happy to drive the car to the lakeside location in between showers.

Although Gamma has zero mileage, Patrick’s team has still restored it, complete with replacement engine.

The Kappa replaced the Thema as Lancia’s executive product in 1994, with production running up until 2001. While the Thema had been popular in the UK, the Kappa never made it to Britain officially; 1994 was the year that the Lancia marque departed Britain for good. The Fiat Group instead concentrated on Alfa Romeo with the 164 and later the 156.

During its seven-year production span, the Kappa was fitted with no fewer than seven different power units, five petrols and two diesels, almost as if Lancia couldn’t make up its mind what to use. The 2.0 16V turbo was inherited from the Thema, while the 3.0 was Alfa Romeo’s Busso V6. Then there were the 2.0-litre five-cylinder 20V and 20V turbo units, as later adopted by Fiat for its Coupe, while the five-cylinder 2.4 20V was shared with the Stilo Abarth.

Kappa body styles included a two-door coupe (designed by Centro Stile), a four-door saloon (by Ercole Spada at Idea) and an estate (by Pininfarina). Kappa production reached 117,216 units, with Italy its most important market.

The Lancia Kappa is a without doubt a ‘Marmite’ car, dividing opinion among the cognoscenti. That’s especially true of the Coupe, which does look rather top-heavy, making the wheels seem undersized. I had never warmed to the Kappa but Patrick was convinced I would change my mind after I had driven his. “But then he would say that wouldn’t he,” I thought.

Patrick’s car is designated Lancia K 2.0t, which has the same 220bhp 2.0 five-cylinder turbo engine as the Fiat Coupe but with the benefit of an overboost facility, and is good for 154mph. The performance is impressive with the turbo overboost just adding that extra bit of whoosh at the top end.

I was super impressed by the Kappa’s ride quality. The body was reported as having twice the torsional rigidity of the outgoing Thema and was, said Lancia, 15% stiffer than any of its rivals – and you can tell. The chassis is well damped and body roll is minimal. Build quality is outstanding and the interior is beautifully appointed, with excellent sound insulation. If I was being uncharitable, I would say that the best thing about sitting in the plush interior is that you can’t see the exterior. This is a true GT car and you could cover continents with ease and style, which is exactly what Patrick does with it. Well, I have to admit Patrick was right – I do like it.