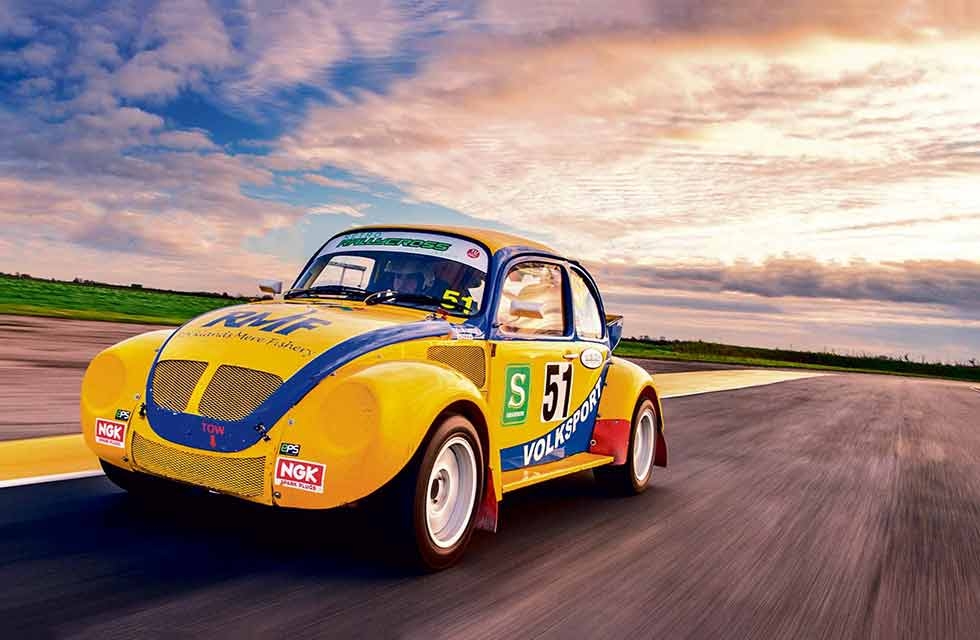 Hal Ridge ‘Jenson Button described driving the Harrold family’s championship-winning Volkswagen Beetle Rallycross machine as the maddest thing he’d ever done. And so it was with a certain degree of trepidation that I climbed aboard this bright yellow 600-horsepowerplus monster of a machine.’

GETTING THE BUG Rallycross VW Beetle

When Jenson Button crossed the Interlagos finish line on 18 October 2009, he joined that elite club: the greatest drivers on the planet. Even in the decade that has passed since, only two other names have joined the list of Formula 1 World Champions.

Like many motor racing stars, Button hails from a family with competition history. His late father John competed in the mixed-surface discipline of rallycross in the 1970s and ’80s, first in a Volkswagen Beetle, then in a Golf. But it wasn’t until the close of his Formula 1 chapter in 2015 that Button, whose route into singleseaters was via karting, got to follow in his father’s footsteps.

‘There’s absolutely nothing offboost; you get hit in the back with massive thrust as you pass 6000rpm’

He did so at Lydden Hill in Kent, as part of a BBC F1 feature broadcast in the build-up to that year’s Russian Grand Prix. While none of Button Sr’s cars are known to be in existence, the then-McLaren driver got behind the wheel of a machine that had competed against his father’s when it was campaigned by the late Peter Harrold. It’s now raced in his memory by Harrold’s nephew James.

John Button’s Beetle had produced in the region of 200bhp. Today the turbocharged Harrold machine puts out more than 600, delivered to the ground via the rear wheels only. It’s a far cry from the mind-boggling, state-of-the- art technology at the core of modern F1 machinery, and Button seemed at odds with the idiosyncrasies of a car from a far more primitive background. Having watched the 15-time Grand Prix winner struggle to select gears and be blown away by its power delivery, I find myself approaching this bright yellow machine with more than a little trepidation.

‘That’s the car he loved, the Beetle,’ said Button at the time of his test, reminiscing about his father’s driving career. ‘The one thing I really remember from those days was the sound of the car. It was deafening. I was five or six years old and when he started it up I ran away, every time, fingers in the ears. This is the reason why I started racing and karting. If dad hadn’t raced in rallycross, I wouldn’t be here in this position right now.

‘Dad’s Beetle had 200bhp. This one has 600 – all in the rear, all the weight hanging out the back. He used to say how he loved the feeling of the engine right out the back.’ Reduced to high-pitched hysterics by the time he’d finished driving the Beetle, Button reckoned it was ‘the maddest thing I’ve ever done’.

Fortunately, since Button drove the car it has undergone further evolution, notably to the engine management system and gearchange mechanism. But I must admit that I still don’t feel particularly at ease as I climb into James’ seat, the same seat in which he won the ultracompetitive Retro Rallycross Championship against an eclectic mix of Porsche 911s, Escort G3s and a Lancia Stratos.

James has already shaken the Beetle down around Blyton Park’s test facility and it’s nicely up to temperature before I climb in, whereupon I’m greeted by a steering wheel slightly offset to the left. ‘It’s always been like that,’ James muses, before talking me through the controls. There’s an array of gauges for boost and temperatures, but the important ones for me to worry about are the large revcounter and the warning lights that, should they illuminate, mean I must immediately shut off the 2080cc boxer engine.

Mounted ahead of the engine, where the rear seats once were, is a five-speed Hewland DS300 gearbox of the kind used in McLaren’s Can-Am cars in the early 1970s, before this car even left the production line. Having initially been run in a mid-engined car, the Beetle’s ’box is turned upside-down for its current role. First gear is on a dogleg down to the left, the clutch is heavy though not ridiculously so, and I avoid stalling as I pull away for the first time. Seldom do opportunities arise for mere mortals to measure themselves against F1 greats; Button stalled the Beetle at the first time of asking, so I’ll bask in this one.

I head onto Blyton’s asphalt with the wonderful sound of the differential whining away behind me and the whistle of the turbo just over my left shoulder, getting ready to spool up and let the horses bolt the gate. There’s plenty of resistance in the throttle pedal, so if you want more power, the request needs to be a definite one. Right now, that’s a good thing. Having watched how Button fared, I had imagined raw power and the tricky gearchange to make overpowering first impressions. There is indeed plenty of power on tap, but it’s not scary and the shift is far more manageable than I’d anticipated. The replacement of the old Porsche linkage with something more accurate is to be thanked here, I think. Meanwhile most of my mental capacity is consumed elsewhere because I feel in no way attached to the front axle, even at this so-far tentative pace.

I return to the pits for a debrief with James and his father Paul Harrold, who since retirement dedicates his life to developing this unique creation. Paul originally built the Beetle with his late brother Peter and friend Trevor Chinn. It was taken out of storage to run in Peter’s memory in 2008, although readying it for its return to the circuit took several years. It turns out that the curiously disconnected feel is down to weight distribution, and the only way to ‘switch the front on’ is to get heat into the soft Avon slicks. I also find out that, having been built from a 1974 1303S shell for the 1981 season, this car was campaigned regularly until the end of the last century, and has survived a number of guises including a period in four-wheel drive. Tyre-warmers would have been used during most of its life, but such luxuries are no longer possible because the Retro series rules do not allow tyres to be pre-warmed.

Whatever the conditions, the Beetle runs cut slicks at the front in an effort to generate as much grip as possible, while the various fluid tanks and the battery are front-mounted to bring some of the car’s 950kg weight forwards. While today’s cool temperatures are good for the intercooler hung off the engine lid in what looks like a rear wing, they are not so good for generating heat in the tyres. So we’re running cut slicks on the rear, too.

As you might expect, the engine isn’t your regular Beetle flat-four. It’s based on an American Volkswagen flat-four block, which is mated to water-cooled, twin-cam Subaru cylinder heads. Before Button drove it, the turbocharger was upgraded from a Garrett T4 to the more modern TO4S, which brought the boost threshold down from a crazy 7200rpm to a more manageable, yet still bonkers, 6000rpm. With the soft-cut rev limiter set at 8000rpm, that’s quite a gain in tractability.

More recently, the original Kugelfischer fuel-injection pump was ditched, along with the distributor, in favour of a MoTec ECU and electronic boost controller. The aim wasn’t to boost vital statistics but to increase the chances of being able to make proper use of an output actually measured at 612bhp. James tells me that ‘the green light flashes to tell you to shift; that’s the soft limiter at 8000.’ Then he adds: ‘If any red lights come on, it’s all over, really.’ Hmm, that puts me at ease. ‘Oh, and change gear as quickly as you can.’

Out on my second stint, trying to build heat into those tyres, that green light flashes merrily on several occasions before I change gear, especially in the long left-hand corner called Lancaster. I don’t want to push much harder at this stage, or to unsettle the balance by going for a gearchange, so I stick with fourth. Then I’m heading down the long back straight, full throttle immediately bringing a surge of power and another flash of the green light. In the blink of an eye you’re flat-out in fifth. That’s about 126mph. From a standing start, you need only blink four times in quick session and you’ve gone from first to fifth.

Through a tight left-right called The Wiggler I ride the kerbs and feel the offside wheels leave the ground, but the chassis is stable and rides the bumps remarkably well. After another straight and into a pair of left-handers, with increasing confidence I get into the throttle harder before the apex and the rear slides as I exit, but I’m alert to the potential of being bitten at any moment. The power delivery might be better than it was in the past, but there’s absolutely nothing off-boost. Then you get hit in the back with massive thrust as soon as you pass 6000rpm.

The gearchange is more positive than I’d expected but the ratios themselves are closely stacked, which makes for a lot of changing via an extremely compact gate. This demands serious consideration with every shift, but confidence is building so, gradually, I increase the tempo. And, perhaps counter-intuitively, the Beetle is feeling more comfortable the closer to the limit I get.

It’s moving around more under me, in part thanks to the now-warm tyres, which allow the rear to slide as freely as I dare, especially on the wider exits. The pendulum effect isn’t as fearful as you might expect, following a recent switch from Bilstein to Ohlins rear dampers, which allow increased travel, while the front coil springs (it’s a ‘Super Beetle’, which originally had MacPherson struts, remember) have been softened from 500lb down to 170lb since the car returned to racing. At last I feel able to lean on the front axle, getting later on the brakes and turning-in harder, the flames emitted from the side-exit exhaust on overrun illuminating the interior with a warm orange glow.

I am a long way from the limit so often reached (and breached) by this car’s regular driver, but then so was a certain Jenson Button. This truly is a monstrous machine, despite the refinements constantly applied to it by the Harrold family, which means that finding those final tenths treads a fine line between glory and disaster. I’ll leave that to James Harrold.

From left In 2015 Jenson Button got a taste of what his dad used to do; James Harrold fills the small petrol tank; multiple gauges and long gearlever in stripped-out cabin; it’s a cold day so soft, cut slicks are best. Opposite from top left Steering wheel is offset to left and ‘it’s always been like that’; Paul and James Harrold flank John Goddard; Beetle is run in memory of the late Peter Harrold.