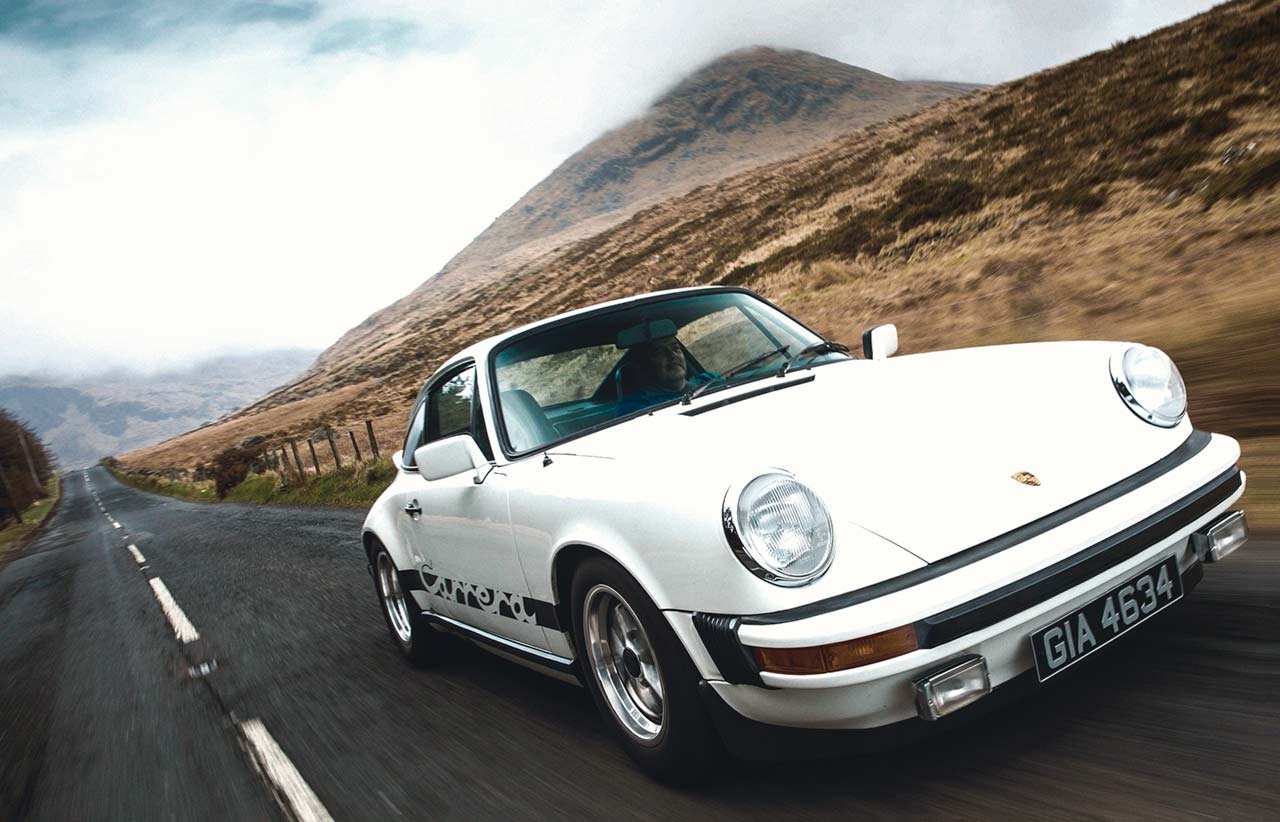 The other G-Series 2.7 Carrera. We examine the common belief that the 2.7 Carrera bound for the US is an undesirable Porsche… exploding a few myths along the way. Written by Neill Watson. Photography by Daniel Pullen.

The Other 2.7 Carrera How does the US-spec 2.7 Carrera differ from the MFI example delivered to the rest of the world?

Nobody likes a killjoy, especially an automotive one. If you were a Porsche 911 driver in the mid-1970s, it must have felt as if everyone was wanting to take all of your toys away and spoil all of your fun. A combination of a global fuel crisis, soaring pump prices for petrol and oil embargoes all combined with a sudden attack of conscience as the world woke up to environmental damage and vehicle accident safety. This ended up having a significant impact on the Porsche 911 that everyone loved.

Gone were the beautiful chromed bumpers, replaced with what many saw as ugly ‘Federal spec’ Impact Bumpers. Even the traditional Porsche whaletail wasn’t spared, the German TÜV authorities deciding that the trailing edge was potentially dangerous, leading Porsche to introduce the soft-rubber edging that we know so well today.

In Europe, drivers were spared many of the engine modifications needed for Porsche to continue to sell the 911 in the US. We remained safely enjoying our mechanical fuel injection throttle response and looked smugly across the Atlantic at the Americans and their California law makers, their poor 911 seemingly shackled.

History has not been kind to the US-spec Carrera 2.7. If online forums and hearsay were to be believed, a California-specification Carrera 2.7 would probably have the uphill performance of a Citroën 2CV. Everywhere you could possibly look gives reinforcement of the jaundiced view that the 2.7 Carrera with CIS is to be avoided. Nothing to see here… head over to Europe and seek out a 2.7 MFI. However, for one man, the chance to own a US-specification 911 proved to be irresistible. “When a friend told me about a 2.7 US Carrera he’d seen for sale, I wasn’t inspired. Like everyone else it was some way down my list of Porsche I’d like to own. However, my friend then said, ‘It’s a non-sunroof Coupe’,” Robin Titterington says.

“That got me interested. After all, I could always swap out the engine, hot rod it, remove the emissions gear. So I bought it with the expectation to change it, tune it, improve it.”

“But as I began to put some miles on the car, the entire validity of their tainted reputation came into question. This was a stock engine and I was having fun. Something doesn’t add up here! I’ve driven 1973 Carrera RSs, nearly every year of early 911 T, E, and S models and have owned a hot rod 2.5-litre 1971 911 for years – I’m not easily swayed.”

Robin was actually enjoying driving the US 2.7 just as it was. The performance was certainly different, but a long way from being unacceptable. And compared with other 911s he had owned, it was actually quite comparable. Why should this stock US-spec 2.7 Carrera with all of its alleged shackles and compromises be such fun to drive? Robin tried to find out more.

“I began doing some quick research, but rather than answer my questions it seemed to turn up lots of conflicting performance data and information. Reviews of the 1974 US Carrera from ‘back in the day’ were overwhelmingly positive, although the performance numbers were all over the map. More recent information and opinion seems predominantly negative. I soon had magazines and books scattered all over my desktop and had to start writing things down to keep it all straight.”

So it appears that all is not as it would seem with the 1974 US 2.7. Robin’s investigations actually posed more questions than answers. “It seems that there were so many different ways to record performance stats in the 1970s. Plus, many automotive magazines didn’t test with the same desire for accuracy that they do today.” Swapping between power outputs measured at the flywheel and then also at the wheels seems to throw many figures hopelessly out of context. Robin’s study of the period data proves to be very interesting.

He continues, “For instance, Car & Driver’s February 1972 test of the new 2.4-litre Porsche used SAE gross horsepower numbers, giving the 911 S 210bhp, but in its 1974 test of the Carrera they switched to the opposite extreme with SAE net horsepower, giving it only 167hp! No wonder many have come to believe these cars are underpowered. In SAE gross units, the 1974 Carrera US has 195bhp.”

Indeed, one of the biggest issues is the Porsche factory’s own recording of statistics. Surely it would have the most accurate and reliable set of data? Well, yes and no. The German government required auto manufacturers to certify published performance numbers so they could be achieved by any similar car of a dealer’s showroom floor. This means that unlike certain Italian supercar manufacturers of the period who would supply a carefully blueprinted and optimized car for testing, Porsche actually submitted figures that were at the lower end of what was possible at the time.

The factory tests also had to include the kerb weight of the car, which was car weight plus a full fuel tank and half of the maximum permissible load carrying capacity of the car. The resulting numbers reflected what could be generally expected by the buying public, not what was possible with a blueprinted engine and a factory race driver.

By now, Robin was becoming ever more confused as his notes on the subject grew and grew. So what was the US Carrera actually capable of? What were the real differences between a 2.7 Euro Carrera and the 2.7 CIS? Robin explains that in his view, that’s the wrong comparison.

While Robin’s view may be contentious to some, he has a very valid point. So when the comparison is made in that context, the reason for Robin’s surprise at his car’s performance becomes apparent. Both the 911 S and the 2.7 US share the same kerb weight. This is possibly inaccurate, however, as the 1974 car had a larger fuel tank. Even so, the small difference is unlikely to affect performance.

Both cars use the same five-speed 915 gearbox with the same final drive ratio of 4.43:1. To take advantage of the torque of the larger 2.7-litre engine, the 1974 Carrera US and the 1973 RS both used onetooth longer forth and fifth gear sets than the 911S.

In horsepower terms, the 2.7 is down 15bhp, 175 versus 190bhp. However, the 2.7’s extra 20Nm of torque, delivered at a low rpm, probably gives very useful performance in real-world driving conditions, which is obviously where Robin is experiencing his car. Okay, so it’s not Euro Carrera performance, but it is far from being poor. In this context, Robin’s comparison makes sense.

However, as we’ve only recently been writing about the 2.7 Euro Carrera in these pages, a direct comparison of the two cars does seem appropriate. Some differences are obvious, others less so.

Starting with the flat six, the obvious difference is the much maligned continuous injection system. This differs from MFI in that it fires fuel along each fuel rail every time the engine rotates, rather than sequentially as in the case of MFI. Sometimes described as Bosch K Jetronic, this system is still largely mechanical in operation, though it did offer enough of an emissions benefit for the car to continue to be sold in the US. To accommodate the system the cam timing needed to be altered, and so these engines also have different camshafts. Robin says that throttle response doesn’t have quite the ‘hair-trigger’ feel of MFI, but is perfectly fine once you’re used to it.

The much discussed emissions kit fitted to these cars actually came in for the 1975 model year. So while Robin’s 1974 car does indeed have an ‘emissions spec’ engine, the real penalties came in the subsequent years.

Other interesting differences are the way the cars were specified at the factory with standard equipment. In Europe, nearly all Euro Carreras were five-speed manual as standard, whereas in the US four-speed was standard, with the five-speed being optional. Electric windows were standard on US cars, together with the rear ducktail spoiler in 1974, both optional on the Euro Carrera. Add in leather interior and the Carrera script on the doors, all of which were almost certainly standard on the US cars, and you can see that the two models were actually pitched at different buyer profiles. The Euro Carreras were designed to remain appealing to European drivers, whereas the high-specification US Carreras all have a significantly higher standard aimed at positioning the car at the top end of the range in 1974.

Robin’s argument that the US Carrera 2.7 is actually not aimed at trying to make an ‘American’ Euro Carrera is actually a very valid one. In fact, in some ways the US Carrera is more forward-thinking, Porsche accepting the fact that emissions regulations were quickly becoming the future of automotive technology going forward. In this regard the Euro Carrera could be considered to be stubbornly stuck in the past, a legacy of a rapidly vanishing time when 12 mpg was considered perfectly fine, everyone smoked 40 cigarettes every day and the world just wasn’t concerned with safety, health or the environment.

Robin sums up the US Carrera very well when he says, “There are no excuses needed to justify this car or its CIS injection system – it was Porsche’s successful solution to maintaining the performance of the 1973 911 S while offering improved emission control, better fuel economy, reduced maintenance and better reliability.”

None of us like regulations that encroach on our pleasure of enjoying a flat six, but as the world constantly moves forward and we begin to see the end of the internal combustion engine, it’s to Porsche’s credit that it has managed to combine the stiff task of regulation compliance with the important job of building cars that we truly enjoy driving for so many years. We all know that one day the end will come for our beloved flat six. The US Carrera is an important chapter in the lifetime of the Porsche 911, and one that probably deserves more credit than it has historically been given.

ABOVE MOMO Prototipo steering wheel has been added by Robin and is not standard spec.

BELOW Red Boge dampers were used on US-spec Carreras.

ABOVE Standard-spec wheels were 6 and 7x15inch Fuchs

Not sure of the key differences between US and Euro Carreras? We’ve outlined them below for you