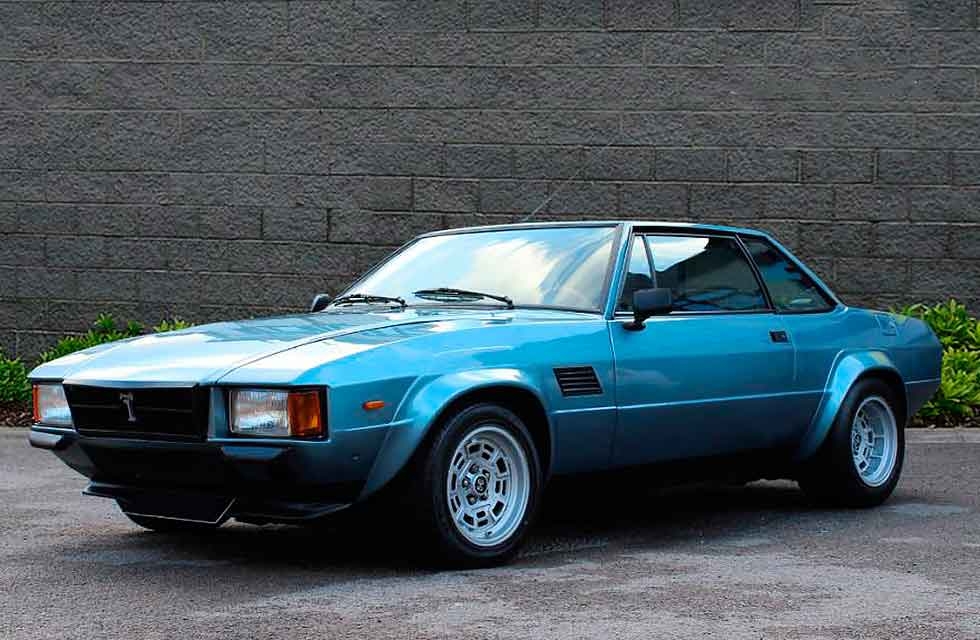 De Tomaso Longchamp GTS £69,950 Not as exotic as a Maserati Kyalami and less prosaic than a Mercedes-Benz SLC C107, this De Tomaso is still an intriguing choice, says Rob Scorah.

In Steel Blue over black leather, this De Tomaso makes a good first impression. The metallic paint is consistent across metal and glassfibre surfaces, and the angular bodywork is pretty straight. There are one or two very small inconsistencies of line as edges are transferred panel to panel, but that wasn’t a whole lot different when these were new. Those flared wheel arches are looking good.

The exterior’s weakest cosmetic feature is the window surrounds’ black coating. It doesn’t spoil the overall effect of the car, but there are many chips to the finish along their length, revealing bright metal below. The joins in the metal on both front and rear screen surrounds are a little messy, and there is some light metal corrosion at the base of the passenger door window – note this is a left hand-drive car.

Underneath it looks good and the wheels are in fine condition bar scuffed rim edges, but the centre bolts are very clean. Inside, the Longchamp has the moderate leather patina that you’d expect from being owned by keen but conscientious drivers. Indeed, one of its owners was endurance racing driver Claude Dubois, while its last owner ran a race engineering workshop. Interior panels are largely straight with firmly-secured door armrest/ handles. One or two screws in the bottom of the trim stand slightly proud. De Tomaso carpets and mats are neat and tidy, and the cabin headlining intact and clean. All the dashboard switches work, though the windows can be very slow.

Under the bonnet, the big Ford Cleveland V8 claims its space in the engine bay. Sporting black rocker covers, they appear to have no leaks. It’s nice to see that wing nuts, springs and jubilee clips are free of grunge or corrosion in their threads/coils and hoses look supple and clean.

Longchamp aficionados might question the GTS designation being applied to a 1974 car (it wasn’t an option until 1980). However, Claude Dubois had the factory fit the necessary upgrades as recorded by the paperwork in the history file. There is also the record of an extensive engine overhaul in 2008, which included new pistons plus camshaft and main bearings. Slightly disappointingly, there is less documentation of its time with the race engineering people, though anecdotally, it’s thought to have been well looked after.

The way the car drives suggests it’s been well fettled. The engine has a sharper tone than its muscle-cum-pony car American cousins and idles smoothly (in American V8 terms). The three-speed transmission slots through its gears nicely and the low-slung GT is obviously capable of some rapid progress, though the power-to-noise doesn’t feel as high as the snarling might suggest it should be. On the move, the suspension certainly keeps the car poised and flat, and without clunks or creaks too. The brakes pull the car up just fine.

Longchamp don’t often come up for sale, so hold their value. This one wears its minor cosmetic faults plainly but feels mechanically very sound. The interesting previous ownership is a bonus too.

1 Introduced at the 1972 Turin Motor Show, the two-door Longchamp was built on a shortened version of the Deauville chassis. Most were equipped with a three-speed Ford automatic transmissions. A small number, just 17, had a five-speed manual ZF gearbox.

2 In 1980, the GTS was introduced, sporting flared glassfibre wheel arches and the Campagnolo wheels from the Pantera. Riding on Pirelli P7s, the suspension was tweaked to increase cornering ability.

3 In the same year, a Spyder version became available, built by Carrozerria Pavesi, though only 16 were built.