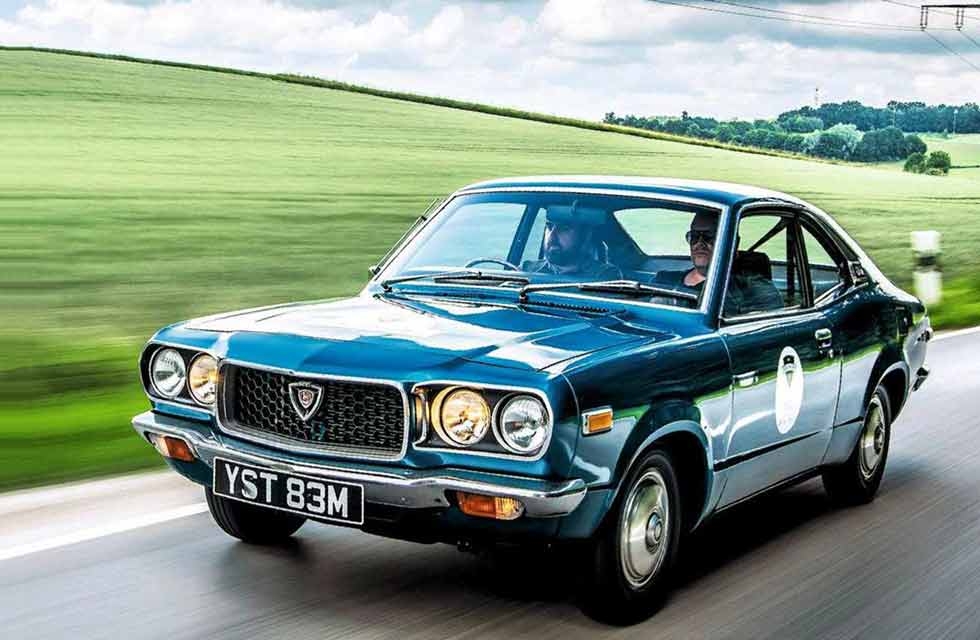 The prominent grille separating a pair of twin headlamps. The chrome festoonery. The body sides billowing out from an introvert wheelbase. From a distance it could be mistaken for a truncated Gran Torino, but this is Mazda’s mid-Seventies attempt to bring rotary power to the global masses – the RX-3.

Stylistically distancing itself from the intergalactic Cosmo and Italianate Luce, the RX-3 is tinged with design Americana; a year before its release, Mazda had formally established its American entity and intended to take on heavy, lazy V8s with compact, value-for-displacement Wankel engines . Forgoing model-name logic, the RX-3 ultimately replaced the forgettable R100 and sat below the larger RX-2 in its rotary range. But America wasn’t the only recipient of the new coupé/saloon/estate trio – as well as being sold back home in Japan as the Savanna, the RX-3 was also pitched to Europeans as an opponent for the Toyota Corolla and Datsun Sunny 120Y, and perhaps more ambitiously, the Ford Escort and VW Golf.

The domestic unfamiliarity it has today summarises how well that went. Despite 286,685 RX-3s of all lavours being sold globally, they remained the lefter-than-leftield choice in the UK. And that’s why this shimmering teal coupé is thought to be one of only five remaining roadworthy examples in the entire country.

More intimate examination reveals hubcapped wheels, badges carrying American buzzwords like ‘Super Deluxe’, and even more chrome, applied with abundance around the rear light clusters. Open the door – whose aperture is pillared, disappointingly – and drop down onto the spongy seat upholstered in vinyl, Seventies Japan’s go-to leather alternative. Directly ahead are a 130mph speedo and a 8000rpm tacho set deep into their own binnacles.

Beyond the forward-leaning dashboard, magpie eyes find highlights such as the spoked air vents, and the ‘Rotary Engine’ insignia accompanied by rounded-triangle rotor logo ahead of the eight-ball gearknob. It’s here that this car’s owner, Mazda UK’s heritage department, reveals some originality caveats. The shift-knob is non-original, but more importantly this example has been fitted with a 1146cc 12A Wankel in place of its original 982cc 10A unit. It also exhales through a straight-through exhaust. So one of the rotary’s headline features in period, its relative quietness, has made way for potential tinnitus.

This deviation from originality is easily forgiven. As the ‘Seventies Mazdas’ pack of Top Trumps strategically placed in the armrest cubby reveals, a 12A-toting RX-3 was offered in most other markets; it was the standard option in Japan and the US. It was also the basis for the numerous RX-3s entered in various championships in the USA (IMSA/SCCA), Japan (JTCC) and Europe (ETCC, BSCC, Production Saloons). Today, the much-rarer 10A survivors are invariably commandeered by Cosmo collectors to restore their rotary rarities to original spec. The by-product is that today’s test car is less a model representative of a UK-spec RX-3, but more a taste of what one perhaps should have been. If the road-going RX-3 was originally offered on these shores in 12A spec, more might have sold. And perhaps the reverential tones in which Golf MkIs and Escorts are discussed today might have extended to the Mazda?

Prime the jets, ire the engine and I’m met by a baritone thrum that settles into throbby barrage of bass, the kind experienced more palpably through gut than eardrum. Lay on a few throttle blips and the exhaust’s vocal upsurge is matched by the whine of the twin rotors and the nasal snarl of the single Weber 48 IDA carburettor (the original 10A would have employed a Stromberg four-choke). Adjusting my rear-view mirror I clock the odd wisp of exhaust smoke, a staple of the rotary warm-up sequence. After a few minutes appreciating the bass-mid-treble repertoire of this RX-3’s remixed theme song, the rectangular secondary instruments in the centre of the dash tell me the fluids are warm and we’re ready to roll. Well, rotate, to be more appropriate.

Plenty of revs are needed to pull away cleanly, an early indication of the 12A’s dietary requirements. Town driving explores the full reaches of the recirculating-ball steering, which is relatively quick for its age at 3.5 turns lock-to-lock – same as a BMW 2002 Turbo – but a rather wide window of play at 12 o’clock is instantly noticeable. Disconcertingly, that window fails to close with either additional lock or speed as I leave town and the roads open out, but the motor’s deviant concerto and inherent willingness to rev urges me to push on nevertheless.

With only three moving parts and no wasted energy driving valvegear, the rotary’s free-spinning nature gives the impression that the tacho needle has a near-magnetic attaction to the redline rather than its rest notch. But the RX-3’s eagerness paints it into a corner of its own making. Not only does wringing it out cause fuel economy to drop further from an already unremarkable 20mpg, it also accelerates wear on the strained rotor seals – the eternal rotary Achilles heel.

The quirks of the RX-3’s DNA run beyond its unconventional engine. The car’s overall proportions are wide in compact-car terms, which aids stability. Yet the wheelbase is short, giving it not only an oddly truncated appearance but twitchy handling. The fastback rear end is suspended by leaf springs – a cost-cutting relic justified by the model being predominantly pitched at the States – albeit with a staggered damper arrangement. Placing one ahead of the live axle and one behind, this was an old pony-car trick to counter axle tramp and wheel hop, but the rudimentary nature of this setup is soon exposed as soon as I start to push the RX-3’s limits. It’s a softly-sprung car with mediocre damping, and a perpetual reluctance to find a cornering attitude and settle into it. Combined with the vague steering and the engine’s inherent responsiveness to the merest throttle poke or lift, the Mazda never finds a state of equilibrium through fast sweepers, demanding unnervingly large steering corrections to maintain a constant radius. It’s here that the RX-3 loses touch with Escorts and Golfs; murmurs of objection from the rotary faithful would easily be silenced by fans of the European alternatives. My confidence in the Mazda is hardly restored by the feeble grip of the seats, nor the upper mount of the seatbelt being located so far up the A-pillar that the belt runs down behind my right ear and across my jugular.

But while the journey to the limit isn’t a particularly reassuring one, venturing beyond it isn’t the cliff edge I’m expecting. When the skinny tyres relinquish grip, they hand me the baton of bringing it back into line in an amicable manner, and their tall sidewalls have enough flex for me to enjoy holding the tail out before collecting it back up again. Despite the throttle’s responsiveness, the lack of engine braking means I’m never thrown into unexpected lift-of oversteer either. The flipside is more reliance on physical braking to knock of speed, and the middle pedal can feel somewhat dead and lacking in progression.

However, the proximity to its footwell flatmates is well-judged and combined with the floor-hinged accelerator pedal, heel-and-toe work is easy.

It seems there must have been some loose wiring between the marketing and engineering departments. Not only was the RX-3 also sold in traditional piston-powered form as the Mazda 818; its rotary engine was installed in a thoroughly conventional chassis. This wasn’t mentioned in the vaguely humorous RX-3 advertorial in the June 1974 issue of CAR magazine. It told the short stories of six opinionated RX-3 stakeholders, from Mazda dealer, ‘The only problem is all these ordinary motors I have to take in part exchange’ to garage service manager, ‘I’ll never get rich repairing Mazdas – 24-month engine guarantee, 4000-mile service intervals…’ to rival sports car owner, ‘I’m sick of little Japanese coupés beating my brand-new MGB away from the lights. It wouldn’t be so bad if you could hear them coming…’

What the advertorial did mention, in its headline in fact, was that the rotor car was very much ‘love it or hate it’. It seemed the latter parish had more churchgoers than the former, in the UK at least, because in 1975 the RX-3 was withdrawn early from sale on these shores. In truth this probably had more to do with an intolerance for the rotary’s thirsty habits in the midst of a global oil crisis rather than abject hatred, but the outcome was the same.

Now the Mazda has moved into rarified-classic territory, its period shortcomings are largely irrelevant. Low annual mileages offset thirstiness, and rotary gremlins are better understood by specialists. The RX-3 might have been overengined and underdeveloped, but being a jack of one trade and master of none is no bad thing today – classics with a single character-defining element are preferable to all-round mundanity. Whether we’re as willing to forgive American-influenced chintz is another question.

Thanks to: the Mazda Rotary Club and Terri Mayne.

Mazda RX-3 blended the brash styling demanded by Americans with the modest proportions required by Europeans. Plenty of revs are needed to pull away cleanly, an early indication of the RX-3’s dietary requirements.

‘I bought my car on the 22 December 1989,’ says Philip Palmer, whose RX-3 coupé is still equipped with its original 10A engine. ‘My family had a Mazda dealership back then. It wasn’t one authorised to sell the rotary cars – that was a thing back then – but we were tooled up to repair them.

We had one of the engines on a stand in the workshop – it always fascinated me, so at 16 I bought my RX-3 as a project. It wasn’t until I was 19 that I got it to a point where it was drivable; from then I gradually improved it, stockpiling parts as I went. Obviously being the son of a Mazda dealer made that easier, but finding certain bits was still a challenge, and still is. Of course, back then we didn’t have eBay. I had to source some bits from Australia – the RX-3 is popular over there – which meant a lot of time spent on the phone at unsociable hours. I had to bulkbuy those phone cards with good rates on international calls.

Today I also have an RX-7 and an RX-8 R3 – that tends to happen once you get bitten by the rotary bug – so I only do a few hundred miles per year in the RX-3. The fact I’ve stockpiled bits and that I do all the work on it myself means it costs me hardly anything. If you’re able to find one for sale, be aware that the engine doesn’t really give any indications it’s unhappy until it’s too late to do anything. You have to let it warm up properly and check fluid levels often – rotaries use more oil than other classics. I also premix for extra lubrication when cold. The most common killer of rotary engines is driver misuse and improper maintenance.’