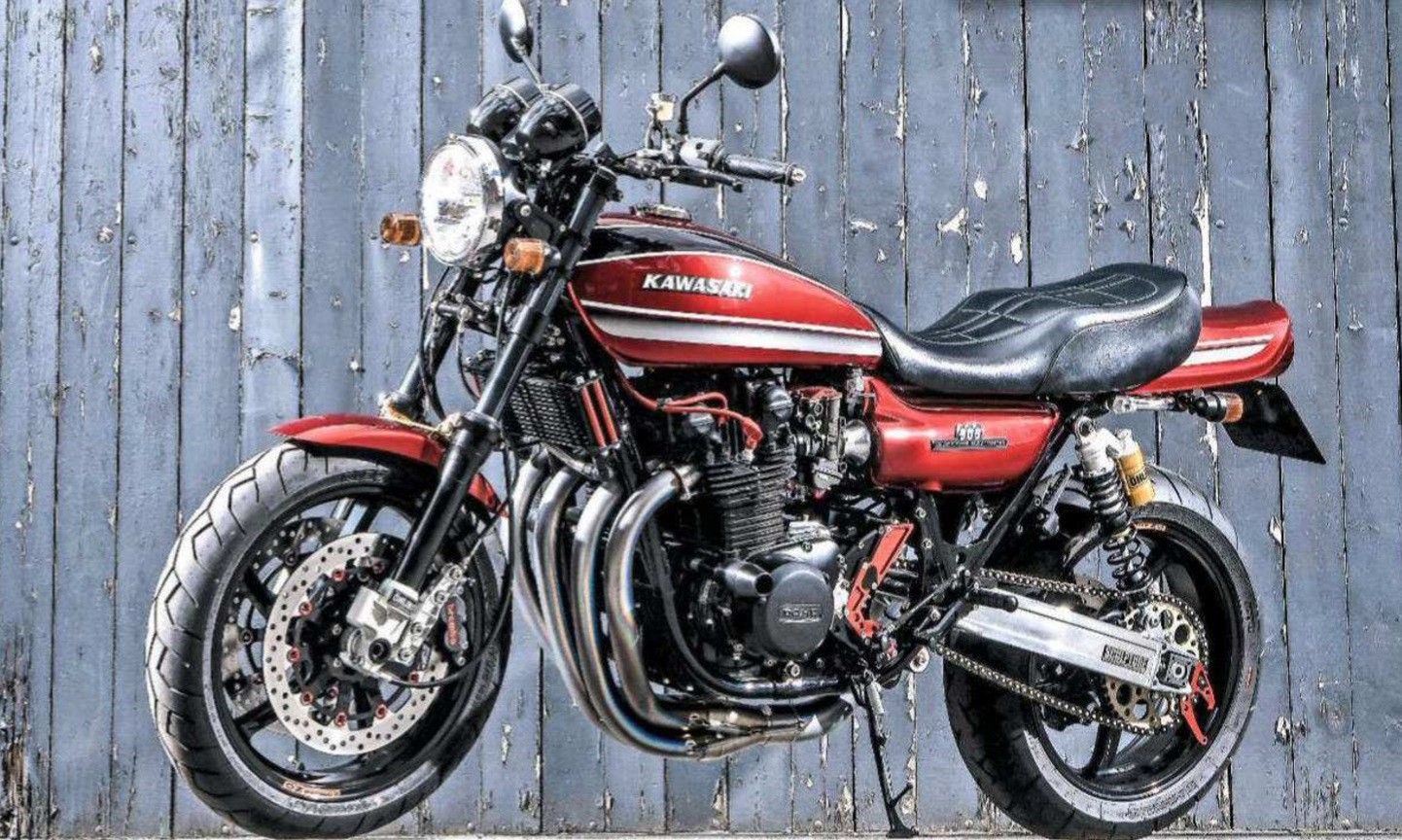 Mick Beardmore is a patient man. He spent a while meditating on the build, then two years getting his Sanctuary-style Z1-A to this (almost) finished stage

THE ZEN OF ZED 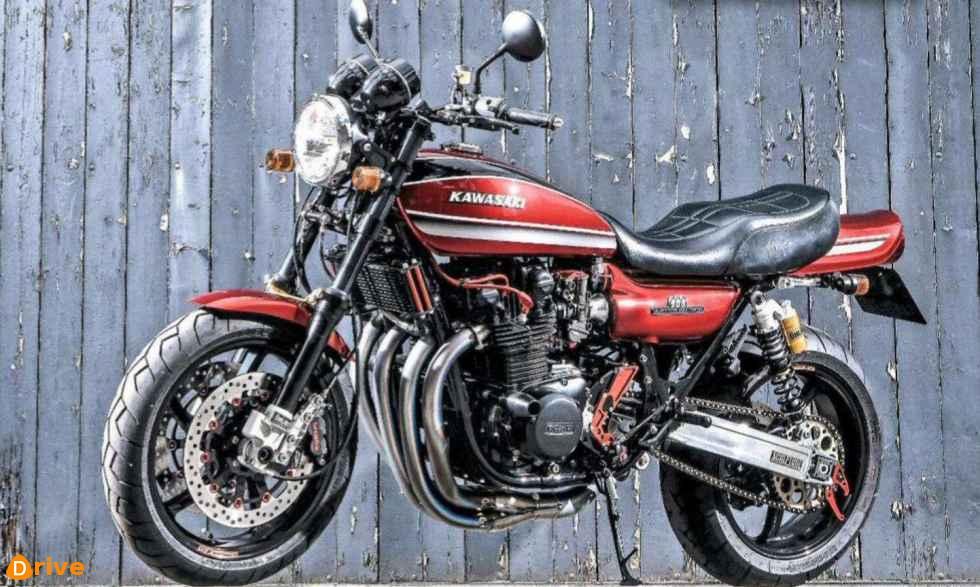 Sanctuary. The word conjures up all manner of visions: one might be Quasimodo clutching the doomed Esmerelda high on the parapets of Notre Dame cathedral yelling “SANCTUARY!” at the baying mob below. Another is more likely a very high-end Kawasaki, in the manner of Mick Beardmore’s scintillating Z1-A. It doesn’t much matter how many AC Sanctuary machines materialize – they’re still to be drooled over.

The near mythical aura to these creations only seems to augment itself year-on-year, etching its ways into the general consciousness, into the fabric of top line specials building. In one way it’s relatively easy to go the Sanctuary route; you buy the bits, you know they’ll be immaculate, you know they’ll fit, spend the money, bish-bosh, job’s a good ’un. But it’s how you match new to original, how you go about the blend that makes the best stand out from the merely good. Mick has plainly spent a great deal of hard-earned on this build. And something more precious yet – time – two years of it.

“I don’t want to discuss money,” he says. Evidence enough that more than beer vouchers have been lavished on his work. And that’s where the craft lies. Almost anyone can get a credit card out and order up exotic bits and pieces. Not everyone can visualize how that array of items will ultimately gel. Buying is straightforward, envisioning the goal, and keeping it in plain sight, is way trickier. It’s annoyingly complex. “I did a lot of research, bought a Lawson rep and when it arrived it was just too good to mess with… so I did it up to a factory finish.

But the intention was always to build a Sanctuary bike,” says Mick. “You can buy all the bits as a kit, but I wanted to use a Sanctuary bike as a template. Once I’d done the Z1000R I knew I wanted something old-fashioned, but with the right modern stuff on it. It was the silhouette that was the important thing.” Mick found his Z1-A in a local bike shop. “It had been there since 1989, all the owners were local and it had 17,000 on the clock.

It had been used as a source of parts and lots of it had been swapped for other non-standard bits over the years, and it had Z1 paintwork. It was a UK bike, with matching numbers, and the last owner was also called Mick – his name was still on the number plate.” The bike was stripped to the bare bones and Mick drew up a parts list. “I contacted Dave Taylor at Saisei in Darlington.

He already imports parts from PMC and Doremi Collection and I asked him if he could source other parts from Sanctuary suppliers like Nitro Racing, Sculpture and Sunstar. All the info was in Japanese, so it took a lot of the worry out of buying these bits,” says Mick. “Then I thought it can’t be that hard to import parts from Japan and got a lot of bits from Webike! But Dave did supply loads of stuff including the Ohlins forks and OZ wheels as well as all the Sanctuary stuff. Dave’s soon launching a new site called onestopmods.”

While Mick was hoarding exotic components, the frame and engine went down to Chris Daniels at The Motorcycle Restoration Company near Saffron Walden in Essex. “I think their work is actually better than Sanctuary’s build standards,” says Mick. “Chris stripped all the old powdercoat off, which was so thick it had kept the frame in almost perfect condition. All surplus lugs were ground off and as well as opting for a PMC strengthening kit, Chris also braced the headstock and top frame rails, and shaved it in the right places for the chain run to work.”

The frame is to all intents and purposes a Sanctuary Type II. “It’s finished in two-pack too, which is the way to go,” says Mick. “It costs more yes, but the finish is better and more authentic.” While it was all largely plain-sailing with the frame, the engine highlighted a few problems. “The barrels had been rebored and fitted with 70mm pistons, but one of the barrels was scored,” says Mick. “I’d already sourced a set of barrels from America as the originals had some broken fins.

But the barrels from the USA also had some broken fins without the seller declaring it, so I got most of my money back and kept the barrels as well. These were still on the original bore so we decided to use them having repaired the fin damage.” But there was more aggravation to come. “The head was cracked along one of the spark plug bosses, so I had to source another head,” says Mick. “Again from the USA.”

With all the component power unit parts now in fit enough shape for the build, in went a 1015cc Wiseco kit, a pair of Yoshimura Stage 1 camshafts, Dyna S ignition pick-ups and coils, and Taylor HT leads. The engine now breathes through 36mm Yoshimura TMR-MJN flatslides. “I couldn’t skimp at all,” says Mick. And he didn’t stop there either. In went a lighter Z1000J clutch basket complemented by a Nitro Racing hydraulic operating kit. Not forgetting a PMC starter motor too.

There are no compromises in this bike. Even the wiring harness is a PMC item with six circuits protected by separate fuses. “I think it was owning the MV F4 that made me appreciate build quality,” says Mick. He started out on a Suzuki X5, went through VFR750s, a GSX-R750 Slingshot, FZR1000 EXUP and a 916 before the MV. But this Z1-A is something on another level entirely, and worth all the minor frustrations. Like the OZ wheels debacle. “I ordered a set of OZ wheels in standard ZRX11 sizes, 3.50 x 17 front and 5.50 x 17 rear, and waited ages for them to arrive from Italy,” says Mick. “They said there was a backlog of wheels for racing teams and that they would take priority.

When I finally opened the boxes, they’d sent a 6.00 x 17 rear, so I asked them to replace it with the correct one. They said ZRX owners all fitted the wider rim. I’d already bought a 180 section rear tyre and didn’t even know if the bigger rim would fit the Sanctuary swingarm. I insisted on the rim being changed for the standard size, then had to wait for a blank to be cut in Italy and sent out. I doubt I’d use OZ again, their customer support was poor.” Mick had planned to have the bike on the Saisei stand at the classic bike show.

“That didn’t happen because of all the delays.” So with the project behind schedule, Mick wasn’t about to start rushing to complete the job – quite the reverse. “I got the paintwork back from MRC, who as usual had done a fantastic job, but the colour I’d chosen didn’t look quite right, and the stripes weren’t quite spot-on either,” says Mick. “Chris suggested using a candy red, so I defaulted to his better judgement and did it again in that.” And the result is awesome.

“It’s a new experience this bike,” says Mick. “Totally different to anything else in that it can feel really relaxing to ride, then it can change character in an instant and really get up and go. With all the frame work and proper suspension at both ends it doesn’t have any ‘hinge in the middle’ either. “There’s nothing to fix on it either. I’d maybe fit a fork brace, but honestly I don’t know what else it needs. I’m just riding it and enjoying it, although it needs a bit more running-in before it goes on the dyno. It’s still a little fluffy at the bottom end.”

It’s very far from fluffy in every other department though. It’s hard as nails and every inch a Zed.“It’s important to keep the Kawasaki feel to it.That’s why all the parts are bespoke and not sourced from other bikes,” says Mick.“Apart from the R1 throttle, that is” he laughs.“But without the clocks and the body parts, you lose a lot.” Nothing lost here at all. It’s win, win, all the way down the line.