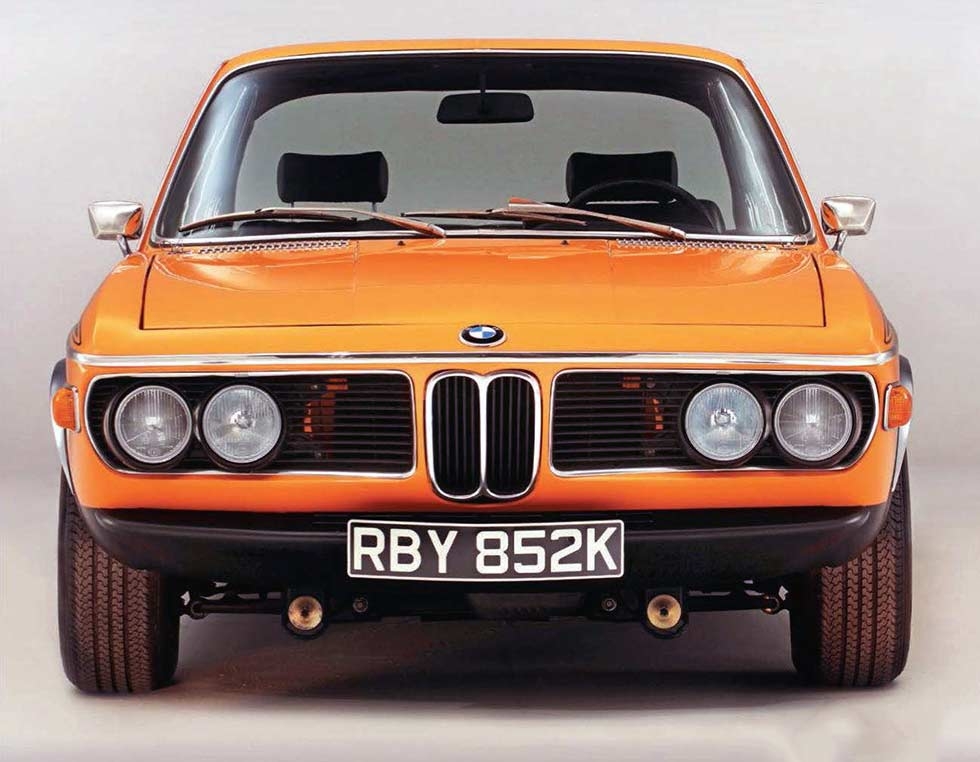 Birth of an icon. The gorgeous BMW E9 coupé turns 50 this year, but it was the arrival of the mighty CSL in 1971 that launched the BMW Motorsport dynasty. Words Martin Buckley. Photography James Mann.

UNDER THE SKIN OF AN ICON   As BMW’s benchmark E9 coupé turns 50, Buckley uncovers a rare early CSL

The story of the lightweight CSL coupé comes in four stages. The 500 right-hookers built for the UK market are the most familiar – and in some ways the least exciting. It’s all part of the legend surrounding this most desirable of ’70s BMWs. The so-called ‘Batmobiles’, the fastest, rarest and most visually dramatic of the cars, tend to get people the most excited; but we don’t actually know much about the very first CSLs, those 169 carburettor-engined cars built between May 1971 and June 1972. They were all left-hand drive and were never sold new in the UK, where their stripped-back character would not have chimed with the luxury image that the local importers (in those days they were merely concessionaires and thus separate from the factory) were successfully promoting.

In many ways, these E9 coupés with their heavy luxury trim and not especially stiff body-shells were unlikely racing cars. Who would have thought a body that started life as the prosiac 2000 CS in 1965 would end up a five-time European Touring Car Championship winner, still competitive three years after the E9s had been replaced by the E24 6 Series?

‘All of its opening panels were made of aluminium, and the wings, nose and roof were of a thinner gauge to save weight’

Before the coupés, BMW had been concentrating its motorsport efforts on the 2002 and Formula 2 racers. Tuning firm Alpina had demonstrated the potential of the new E9 six-cylinder coupé, when its almost standard 2800 CS E9, complete with power steering, managed to finish the Spa 24 Hours in 1969. The car came a respectable ninth overall but used up 40 Dunlop racing tyres in the process – a clue to the fact that the BMWs were at a huge weight disadvantage, particularly compared with the tinny V6-engined Capris. Officially, BMW was content to let Alpina, Schnitzer and the other privateer teams campaign the CS coupés on the basis that they could always bask in the reflected glory if the cars were successful, but equally claim they were ‘not invented here’ if the cars failed to cover themselves in glory.

However, in 1970, despite the fact that the factory had pulled out of competition involvement altogether, things began to look slightly more promising for the coupés: Alpina’s 2800 CS chalked up two outright wins in international events counting towards the European title, and the car could now wind itself up impressively on the straights, thanks to its 280bhp dry sump engine and smaller, wider 13in wheels, beneath ‘bubble’ wheelarch extensions.

The trouble was that the coupé was still too heavy at 1270kg (compared to the 970kg/300bhp Capris), and that meant a discrepancy of 10-15 seconds per lap at the Nürburgring. Even so, there was now a renewed determination within Alpina and Schnitzer to build a BMW that could beat the increasingly dominant Fords.

That day came at Zandvoort in August 1971, when Dieter Quester’s Schnitzer-prepared 2800 CS led home the RS2600 Capris of Marko and Glemser. By now, the 2800 CS had been replaced on the Karmann production lines by the 3.0 CS, and the creation of a lightweight version, to be marketed as a separate model, was under way. The tuners’ pleas had been heard: the 3.0 CSL was to be built to the tune of 1000 examples to homologate a lighter coupé for Group 2 of the European Touring Car Championship.

Behind the scenes, BMW was gearing up to launch a new Motorsport division headed by Jochen Neerpasch. The architect of the Capri’s track success, he had been poached from Ford’s competition wing by BMW’s new sales chief Bob Lutz, but only on the understanding that 1000 lightweights would really be built.

The roadgoing CSL, first shown at Geneva in 1971, was an impressive 400lb lighter than the CS, at 2569lb. All of its opening panels were stamped out of aluminium and the steel panels – wings, nose and roof – were of a thinner gauge to save further weight.

The diet plan did not end there: the rear side windows were of acrylic and the front and rear screens a thinner laminate. There was no front bumper at all, and the rear one was a black polyester moulding weighing in at just 5.5lb. There was less sound deadening, thinner carpets, scant rust protection (there was never very much of that anyway on these Karmann shells) and even the boot lock and bonnet latching mechanisms had been omitted in the name of shedding pounds. The bonnet was now secured by chromed, quick-action ‘racing’ latches. It almost goes without saying that the power steering and electric windows had gone; the plastic rear quarter-windows were even fixed to save on the weight of the hinges.

Inside, the headliner was in black to cut down on reflections and the hefty reclining front seats had been replaced by a pair of lightweight and sporty buckets by Scheel, with black corduroy cushions and figure-hugging outer bolsters in black leatherette; the twin rear seats were trimmed to match.

Out went the huge, thin-rimmed steering wheel critics had been berating since the E9 was launched, replaced by a chunky three-spoke with a greatly reduced circumference. The courtesy light was replaced by a map-reading light on the dashboard for ‘rallying’, and there was no sign of the famous BMW toolkit mounted in the bootlid, or of the boot carpet or rear window heater.

What you did get was a set of 7in-wide Alpina alloys (the CS and CSi had 6in rims) with chromed wheelarch lips to accommodate their greater width, and black accent stripes running along the car’s beltline with the ‘3.0 CSL’ nomenclature cut out of the stripe on the front wings.

With the slats of the nieren (‘kidney’) grilles, and the faux wing vents, painted matt black, these early CSLs came in a special range of distinctive colours, too: Colorado (orange), Golf (yellow), Inka (gold) and Verona (red).

Less obvious were the Bilstein gas struts and progressive-rate springs that sharpened up the original car’s slightly soft feel, apparently with very little penalty in ride comfort. There were slight camber changes all round, too, plus marginally lower-geared steering, and a limited-slip differential with a 25% locking action – the latter a standard feature on the original 2800 CS coupé, but one that had mysteriously disappeared from its 3.0 CS successor.

And yet, mechanically, it was otherwise stock 3.0 CS, sharing the same 2985cc M30 straight-six, rated at 180bhp with two Solex 35/40 twin-choke carburettors and matched to a perfectly standard Getrag four-speed gearbox. The claimed top speed was 132mph – theoretically no better than the CS – but with 0-60mph in 7.2 seconds and 100mph now attainable in third gear with the 3.45:1 differential.

BMW claimed 12.79lb per bhp in a brochure for the CSL, which ran to three folded colour sheets. Published in October 1972, this is a curious document that lists a 3003cc carburetted CSL, a variant that never existed. In fact, all the bored-out 3003cc CSLs were Bosch-injected cars – the ‘CSLi’ if you like – of which 500 were for the right-hand-drive UK market ‘City Package’ models with CS/CSi bumpers, power steering and most of the other luxury gadgets reinstated, to the obvious detriment of the car’s ‘lightweight’ credentials. You could order all these extras in Germany on the left-hand drive CSLs as extras, of course; Bob Lutz ran a fully optioned 3003cc CSL, complete with air-conditioning, as his company car.

It was Lutz who identified that injection would have to be part of the CSL package if they were going to sell 1000 cars, even if the Bosch electronic system was not suitable – and thus did not need to be homologated – for racing. By increasing the bore by 0.25mm (the maximum overbore on the M30 straight-six) to get 3003cc, the CSL went into the over 3-litre class in Group 2 of the ETCC, the real point being that the Motorsport department then had the wriggle room to increase the capacity even further.

The carburetted CSLs seem, then, to have been a pre-production dry run for the lightweight coupé project; the arrival of Neerpasch in Munich, armed with the promise of being able to build a separate Motorsport company, finally giving the idea the momentum it needed. Of the 169 carburetted CSLs, it is believed that 21 were bought by Alpina, Schnitzer and some of the other privateer teams to convert into racers, while the remainder went into the normal BMW dealer network in Europe.

For further identification, the 3003cc fuel-injected cars have 2275/2285 chassis numbers (depending on whether they’re left- or right-hand drive) while the carb CSLs have chassis numbers in standard CS sequence beginning with 2210, 2211 or 2212.

Finished in 002 Colorado orange, this car has led a charmed life over its 46 years and 40,000 miles, even retaining the original paintwork – a good thing, this, because a fair number of these early lightweights would have been modified or upgraded over the years with no thought for originality, particularly when their values were relatively low.

Today, though, originality is key, and 2211723 enjoys the bonus of never having seen rust, a rare experience for an E9 coupé – the old joke about Karmann inventing rust and then leasing it to the Italians has more than an element of truth in it. Luckily, it lived with its first owner in the Asti region of Italy until the early ’90s, where it was always kept in dry storage.

In 2009, current custodian Barney Halse of Classic Heroes got to hear of the car. Although Halse has been driving, restoring and selling CSLs all his adult life, he had never seen a carburetted car until he went to look at this one.

Once he’d secured the CSL, Halse sent it to BMW Classic in Munich for recommissioning, with instructions to keep it as original as possible. “Even they were excited,” he says. “They’d never seen a carburetted CSL before either.” With refurbished brakes, fresh rubber all round and its Bilstein dampers rebuilt it is now a specimen example of the CSL in its purest form, and the pride of Halse’s small but very discriminating collection of classic BMWs.

Today this carb CSL is a rarity aficionados of the E9 would kill for, but at the time these homologation specials were tricky things to pitch to a buying public who largely didn’t care about racing. They were more expensive, less robust and less comfortable than the standard model. Perhaps it is only as a collector’s item that we can see the true significance of these early ‘pure’ CSLs. The M1 E26 was the first official BMW Motorsport car, but the carburetted CSLs were where the story really began.