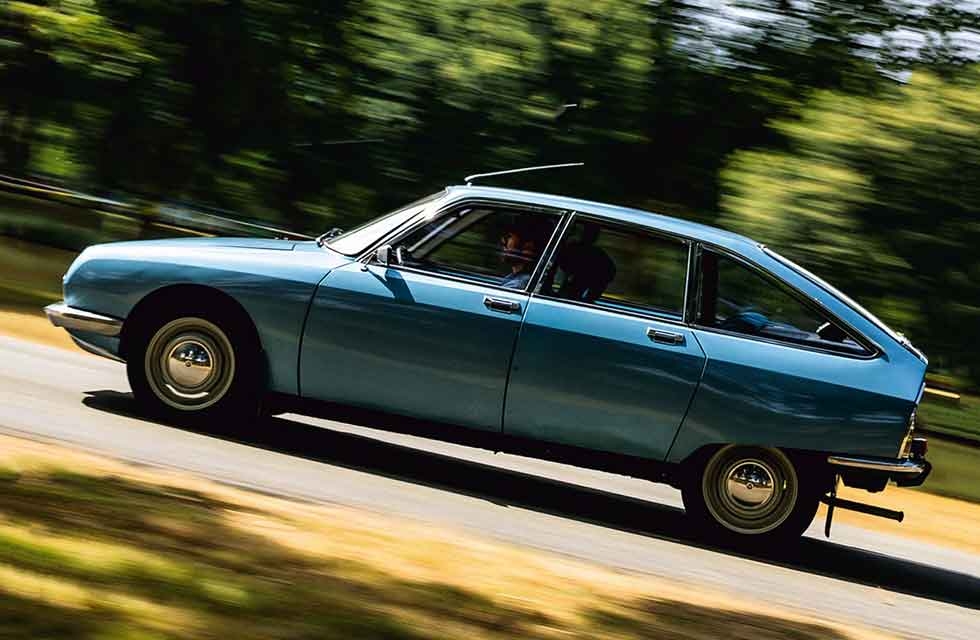 Citroën Fights Back 50 years on, Jon Pressnell recalls the impact of the brilliant mid-sized GS. The GS saved Citroën by plugging the hole in the middle of its range between the DS and 2CV. Half a century later, a rare early model demonstrates the purity of the design. Words Jon Pressnell. Photography Olgun Kordal/Giles Chapman Archive.

style=”light” size=”5″]The retired salesman leaned back in his armchair. “Ah, the GS! I remember the launch. Dealers were crying.” I raised an eyebrow. “Tears of joy,” he explained. “At last Citroën had listened, and come up with the car they had been demanding for so long.” The conversation stuck in my mind, and left me with a curiosity about the GS.

Because if it was the answer to those dealers’ prayers, it also had a rough start. The 1015cc engine was judged low on power, plus the car had driveability problems and poor fuel consumption – Autocar managed just 23.3mpg overall. There were also reliability woes. Received wisdom says that the GS only came good with the arrival of the 1220cc version in 1972. If that’s true, does that make the 1970 car the runt of the litter? That salesman’s story neatly encapsulates the way Citroën came across in the pre-GS era.

Complacent? Incompetent? Arrogant? Probably all three. At one end of its offerings was the unutterably basic 2CV; at the other the DS, a high-tech marvel that redefined what was possible in a mass-produced car. In between was the Ami, a rebodied 2CV with a 602cc engine, and the ID, which was a stripped-out DS.

“I was a Porsche fan but I fell in love with the design. It’s timeless, and it’s not posh – it’s a middle-class car that has class”

It had taken Citroën five years to react to the Renault Dauphine with the Ami. And when Renault came out with a ‘better 2CV’, the R4, Citroën tried to take its nationalised rival to court for supposedly copying the 2CV’s design. The Ami held the fort for a while – indeed it became France’s best-seller. But in the boom years of de Gaulle’s presidency it was clear that a dolled-up ‘Deuche’ was inadequate to plug that 2CV-to-DS chasm. In ’1964 Peugeot launched the 204, a smart, technically up-to-the-moment model that happily sat above the Ami; a year later Renault unveiled its R16, equally happily sitting below the ID and DS. As the economy expanded, both cars went on to sell in large numbers.

Happiness was in short supply at Citroën dealerships, as the two competitors ate into their market share. A second attempt to drag Renault through the courts, this time for ‘copying’ the Traction Avant in designing the R16, was a reflection of the Quai de Javel’s arrogance. What was needed was not bully-boy legal manoeuvres, but a mid-range car people wanted to buy. But Citroën muffed it, in typical fashion, by spending far too long trying to develop a new mid-sized model… then calling quits. Having abandoned a design known as the C60, a sort of miniature DS with hydropneumatic suspension and a flat-four, in 1962 it threw its energy into a new proposition. ‘Project F’ was to have either a flat-twin or a Wankel rotary, and be available in two wheelbases with two different suspension systems: torsion-bar or hydropneumatic.

The car was intended to be on sale by ’67 but it proved a disaster. Prototypes suffered from miserable rigidity and poor roadholding. The Wankel wasn’t ready and the C60’s flat-four didn’t fit. In a final ironic twist, the torsion-bar suspension was so similar to that of the R4 (and R16) that Citroën risked been sued by Renault.

It was also exposed to the same threat on account of the car’s construction, which used R16-style roof-top seams. In 1967 Project F was cancelled, with five years of development largely wasted. Such is the background to the GS, whose development was rushed through in three years after the canning of Project F. Better still, the GS emerged in September 1970 as sleekly elegant as the hatchback ‘F’ had been clumsily squarecut.

The first production Citroën styled under Robert Opron, it was a response to the firm’s unwillingness to invest in an engine of the size the market demanded – acceptable performance could only be achieved via good aerodynamics. “We really worked on it in the wind tunnel, because we knew we were saddled with a small engine,” Opron commented in 2002. He also said the shape was not inspired by Pininfarina’s ‘Aerodinamica’ Austin 1800 – a denial treated with disdain by that car’s designer, Leonardo Fioravanti, who a few years later told me how outraged he’d been when he saw the Citroën.

The boldly Kamm-tailed GS was much more than a pretty face. It had an all-alloy, overheadcam, air-cooled flat-four, and a simplified hydropneumatic system for the suspension and the all-disc brakes. At just over 13ft 6in long, it was also very spacious, and had an extraordinary sill-less rectangular vault of a boot, the spare wheel being under the bonnet and the rear bumper being incorporated into the bootlid.

Quite legitimately, the GS could claim to be the most advanced medium saloon in the world. ‘Every few years a new car comes along that stops us dead in our tracks and causes a great leap in the general drift of development,’ said Autocar. Leonard Setright wrote in Car that ‘this absurdly low-priced paragon is a more truly modern car than anything twice the price’ and speculated that no other car was likely to come ‘so near to sensible perfection’. In short, it was every inch what a Citroën was supposed to be. No wonder those dealers had a tear in their eye as the Car of the Year accolades were bestowed. No wonder, too, that Citroën production jumped by 130,000 in 1971 and by a further 65,000 in ’1972.

This more than honourable performance was not, alas, repeated by the ageing GSA. With their plastic bumpers and blunted detailing, these later cars light no fires for me, despite the extra power of the 1299cc ‘four’ and the clever dashboard control pods. The purity of the original, with its slender chrome bumpers, honeycomb grille and uncontrived rear lights has a straightforward classiness that ticks all the boxes precisely because it’s not trying too hard. Bob Mulder’s ‘1015’ is a 1972 model. The first owner used the car until the ’90s, then stored it in a barn until 2017. “I wasn’t really into Citroëns before, although my grandfather had CXs,” says the Dutchman, who bought the GS in early 2019. “I was a Porsche fan, but I fell in love with the design. It’s timeless, and also it’s not posh. It’s a middle-class car that has class, if you like.”

Despite his Porsche past, Mulder doesn’t feel let down by the driving experience. On the contrary: “It’s lovely to drive. That high-revving ‘boxer’ makes a great sound, and it gets smoother the faster you go. People say the bigger units are less revvy. A happy cruising speed is 70mph, with the engine turning over at 4800rpm. It wants to go to 75mph, but is more strained over 5000rpm.” The other mechanical element that gives the GS its character is its hydropneumatic selflevelling suspension. “It’s a big part of the pleasure of driving the car,” says Mulder. “On a winding road you just keep on the throttle and the front-wheel drive pulls you through, without a hint of understeer. That’s what surprised me. It scuttles around bends. And it’s so comfortable and stable. In crosswinds it just sits steady. My modern Audi is far more sensitive to sidewinds.”

Time to see if my affection for hydropneumatic Citroëns translates down from a love of the DS and a bittersweet period with a CX to something that plays in rather more modest territory. First, though, you have to get past that old Citroën bugbear: this is a company that historically spent money on technology and then tried to make ends meet by scrimping on trim, fit and finish. Brittle, cheap-looking plastics predominate inside, along with embossed door cards that feel equally low-rent. Still, the swoopy dash is a bit of futuristic fun, with its rotating-drum ‘cyclops eye’ speedo – accompanied on the Club version, as here, by a quadrant-shaped rev-counter with an inset clock. The stripped-out Confort model had a sad blanking plate in place of these two dials, whereas UK cars of both varieties were given a set of conventional round dials that was the envy of home-market GS owners. A further quirk is the dash-mounted handbrake, filling the space where a 2CV-style push-pull gearchange had been until late in development.

First impressions are that this is a sweet little engine, spinning swiftly up the rev range with none of the lawnmower agriculturalism of the 2CV’s twin. On the flat you aren’t aware of any torque deficit: you just use the revs. Helped by a smooth clutch, playing gearboxly tunes is a pleasure, the floor change having a deliberate long-throw action that is the right side of notchy, the lever clicking precisely from slot to slot.

The unassisted rack-and-pinion steering is quick and light and the ride relaxing, with a slight jounce to its gentle gait – and none of the seafaring softness of the DS. Adding to the comfort are typically Citroën-cushy seats, while wind-noise suppression is excellent. Finally, this is a car that brakes well – as it should, with those powered discs – though you do have to get used to the instant but slightly dead action.

In my heart of hearts I know the 1220cc GS is a better car, more flexible in its delivery and more acceptable in its consumption. But there’s an appealing challenge to making swift progress in the zingy ‘1015’ with just 55.5bhp at your disposal. Ultimately, though, this is a cruiser rather than a sprinter: get it up to speed, settle back, and let the aerodynamics do their stuff.

When this car came out in 1970, British Leyland was in the process of reinventing the Morris Minor as the equally primitive Marina; Rootes (sorry, Chrysler UK) had just worked out that coils might be better than cart springs for the new Avenger; and Ford had gone all glam rock with its MkIII Cortina. Against such uninspiring fare the GS seems leagues ahead – fresh, modern, totally usable and very proficient, with a big-car feel. Yes, its intellectual approach would have had accountants at more orthodox companies in a cold sweat; it probably made little money for Citroën; and servicing costs were high. But what a fine motor car!

The GS led to production being ramped up at Quai du Javel.