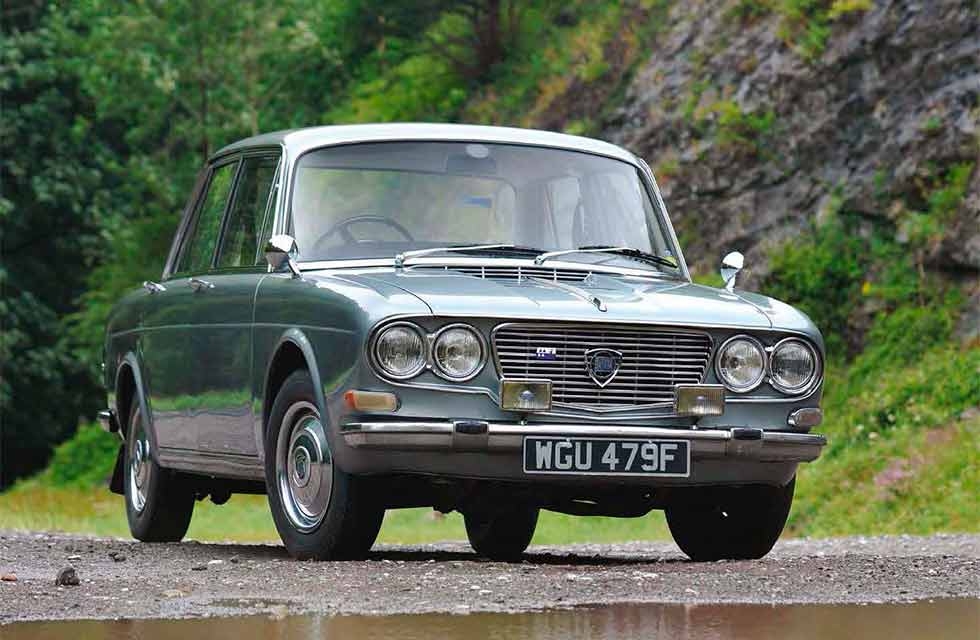 Original Flavia – understated Lancia – for those who know. Too often underestimated and overlooked, Lancia’s Flavia has unerring quality writ large upon it – especially this sensational 27,000-mile Series 2 Berlina. Story by Simon Charlesworth. Photography by Michael Ward.

Originality has a soft voice. If you admire, encounter or drive a good number of Italian classics, this whisper is something easily sensed from some distance. It doesn’t shout like a box-fresh supercar, or boast like a concours queen, so you must be sure that your ears are primed.

“This Lancia radiates rightness. It’s enough to give you drool-induced dehydration”

Attending Prescott’s recent ‘Vita Rossa’ shindig, the little voice spoke. After a day spent gawping at all manner of loveliness, from delicious vintage Bugattis to throttle-blipping Lambos, Alfas and Abarths, subtlety politely coughed and caught our attention. It came from Bob Moore’s unassuming 1968 Series 2 Flavia and it quickly became clear that this was one of the cars of an already great event.

This Lancia radiates rightness. The straightness of its bodywork, how the panel gaps remain true and regimented, its flanks unmolested by tarnish or buffoonery. Then there’s the oh-so subtle yellowing of its sidelamps – a colour echoed in the Carello foglamps. The brightwork has not succumbed to weathered acne. Its bullet-shaped wing mirrors beckon you hither, as do the period- perfect stickers in the rear screen, those mud-flaps, that interior… It’s enough to give you drool-induced dehydration.

The Flavia saloon is seldom encountered in the UK, especially with its steering wheel on the right side. Lancia’s new-for-1961 midmarket model filled the gap between the Appia and Flaminia. It was engineered by Lancia’s technical director, Antonio Fessia, whose CV included overseeing Dante Giacosa’s Topolino whilst at Fiat. Named after a Roman via, the Flavia was styled by Piero Castegnero, and came from an era when US/Italian design cross-pollination was such that it was hard to recall who had started copying whom.

In between Fessia’s time at Fiat and Lancia, his roles including a spell at CEMSA, an aircraft company that needed to diversify into car production following WWII. Fessia created the CEMSA F11 in 1947, a front-wheel drive car with a horizontally-opposed 1100cc ‘four’ and unitary body. Prototypes were shown to the public, but the project never reached production. Fessia joined Lancia in 1955 as a consultant, before becoming technical director following Vittorio Jano’s departure for Ferrari with the D50 racer.

The F11 would inspire Fessia’s new 1488cc Lancia. Its specification included an all-alloy, OHV boxer four-cylinder that produced 78hp at 5200rpm and torque of 82lb ft in single-carburettor tune. The boxer was mounted longitudinally and forward of the front axle line, and the Flavia boasted a flat floor, column gearchange and bench seating for six people. The drivetrain and front suspension were mounted in a subframe attached to the monocoque body. Front suspension was via unequal-length wishbones, transverse leaf spring, anti-roll bar, telescopic hydraulic dampers. Astern was a dead axle suspended via leaf springs, anti-roll bar, telescopic dampers and located by a Panhard rod. Completing the Flavia’s technical picture were servo-assisted disc brakes and Pirelli radial tyres all around.

Initially produced at the Monginevro factory, berlina production was transferred to the new Chivasso plant in June 1962. In 1963, a new 92hp 1.8-litre engine was launched, with similar internal dimensions to the Variant 1005 engine which was optional on the Coupe, Convertible and Sport Flavias. In 1965 came the short-lived 102hp mechanically fuel-injected model – one of the first ever produced – showing that Lancia had lost none of its technical derring-do.

The reason the original fuel-injected Tipo 815 Flavia was so short-lived, was that the model was due for a spruce-up, becoming the Tipo 819 in 1967. The most obvious results were cleaner, more modern lines, a wider front track, lower waistline, bigger glasshouse and new dashboard; many of these cosmetic touches were inspired by the Lancia Fulvia sister model. The 1.5-litre engine was still available, while the 1.8 continued with or without optional fuel injection, and a floor-mounted gear-change could also be specified.

This is where we get off, for our journey through the Flavia’s timeline has reached our stop. There is no need to carry on with the 2.0-litre models or the post-1971 cars, which under Fiat ownership dropped the Flavia name in 1971 to become the last-of-the-line Lancia 2000 (RIP 1975).

Parked in a timeless Somerset setting, only the Flavia’s ASI (Automotoclub Storico Italiano) plate wrestles the car away from daydreams of 1968. Owner Bob Moore recounts how he found the Flavia: “I saw it advertised online, already in the UK and registered. I didn’t mind that because it saved a lot of mucking about. I’ve still got the letters from the DVLA, stating that the car couldn’t be taxed unless there was a letter from Fiat saying it was built in 1968. I have that, too, stating that the chassis was laid in June 1968.”

Getting acquainted with this 27,000-miler is a pleasure. Imported from Verona, the fuel-injected S2 features a heated rear screen and power steering. The details are almost overpowering in their delight: key ring, engine bay, tool kit, mint rubber mats. Sit inside, and the interior adds awe to your emotions. Bob had to remove the shredded discoloured plastic factory door-card protectors from the front, but they are still present in the rear. All of this enforces the feeling that this car has been thoroughly pampered, and a debate starts as to whether or not its paint may or may not have received a rejuvenating squirt.

“I was looking for a car from when I was 16 or 17 with a bench-seat and column change – I suppose I was revisiting my youth really. I actually don’t think you’ll find a better one. I do polish it quite often, so it does shine. I think it probably is its original paint, but the ‘but’ is, how did it get through life without a little knock which had to be put right?” Improbable but – you’d hope – certainly possible.

In the fabric of Bob’s motoring tapestry, the Lancia marque was already in the weft and weave. He had a 1967 Flavia Convertible and a 1963 Flaminia, the latter owned between 1982 and 1988. “About seven or eight years ago, when I had a lovely Borgward Isabella, I was at the NEC show with it on the club stand – and there on the Lancia stand was my Flaminia, looking absolutely stunning and there with the same bloke who bought it from me 20-odd years ago.”

So Lancias never really left the blood. “I always felt with Lancias that they were ‘quality’ – and this more so than any of the others. Perhaps it’s because I didn’t appreciate them as much back then. It’s the smoothness of driving it, thanks to that flat-four. It’s not quick off the mark because it’s a bloody heavy car but it sings. It has synchromesh on all four gears, which is nice. It also has reclining seats, which my original would not have had. They are so comfortable.”

Taking centre stage amid this splendid interior is the neat S2 dashboard, which is far smarter and more cohesive than the original. Everything is perfectly visible behind the generous horn-rimmed steering wheel, which is as upright as the seating position. Given its modest footprint, the sense of space, roominess and solidity impresses almost as much as the as-new condition of the cabin. The engine fires after a twist and push of the ignition key. The first-second plane of the column-change is nearer the wheel. The clutch is friendly and communicative, the gearchange clearly defined and positive. Above 3000rpm the Flavia really gets into its stride, the soundtrack is flat-four ’n’ funky overlaid by a merry tappety OHV jig.

Although the road is a familiar collection of twists and turns, the wet conditions demand caution. As most of the Flavia’s weight distribution is focused in its nose, with a low centre of gravity, corners are anticipated with great promise. The Flavia doesn’t disappoint.

The lightness of its controls encourages a relaxed attitude. The steering quickly becomes second nature, for the assisted steering box is beautifully weighted, geared and full of information. It doesn’t merely shame many PAS systems of the 1960s, but it’s also capable of humiliating current EPAS systems. As steering lock is applied, the Flavia’s front end quickly reacts – there is little inertia and roll – and it just takes it all in its casual, capable stride.

The 1.8 needs to be worked to overcome the Lancia’s heft and tall gearing. The sprint to 60mph takes 19.9 seconds, but it enjoys itself getting there – and once up to speed, its refinement adds to the occasion. The brakes are both effective and easy to modulate. Even when traffic on our B-roads slows to a sub- 30mph uphill crawl, the torque is enough for it to cope with the dawdling and return to the national limit in third gear.

Progress is hushed enough to allow easy conversation, with a ride quality that practically ignores broken and battered bitumen. There isn’t any float or wallow; your backside remains contented, for the ride is both comfortable and connected.

To judge this Lancia by its 1960s style is to underestimate its dynamic capabilities. Its subtle myriad charms, engineering integrity and understated class combine to provide a shot in the arm against today’s overbearing throwaway behemoths. The Flavia is easy to get to grips with, and whether it be cruising or feasting on snaking tarmac, this quiet and highly desirable car feels perfectly at home.

Clean shape is understated if perhaps unsexy. Air of superior quality is crystal clear throughout. It’s the achingly original details that make this 27,000-mile Flavia stand out, from mudflaps to mildly yellowed light lenses.