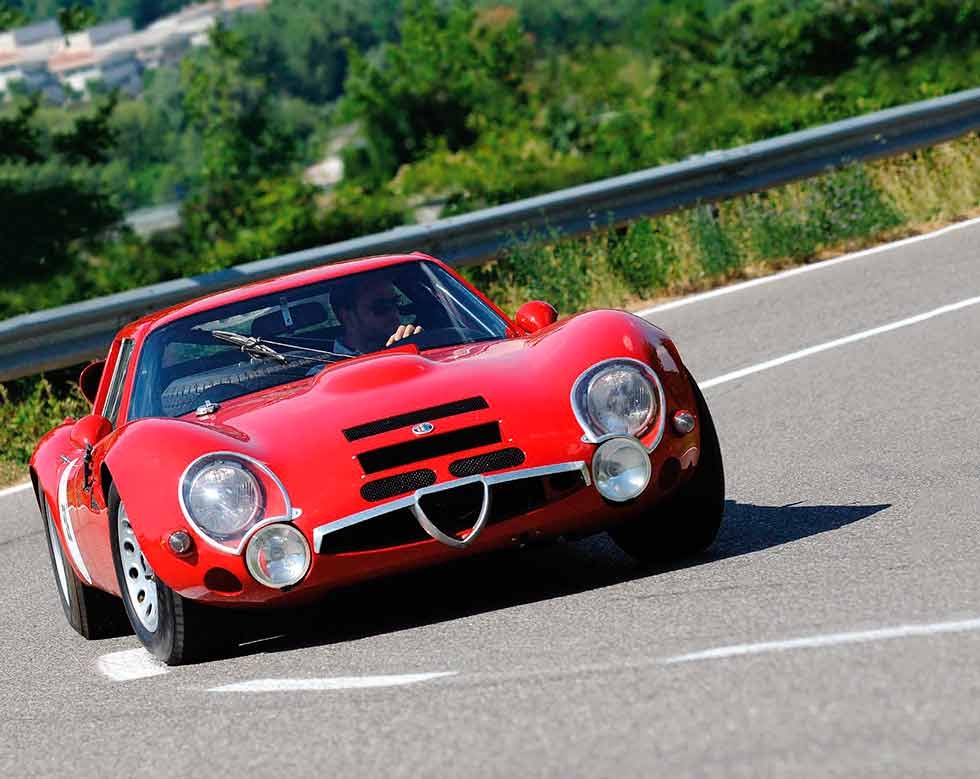 Alfa Romeo TZ2 We attempt to shed light on the mysteries of the ultra-rare and delectable TZ2 – and get behind the wheel of one. Story by Andy Heywood. Photography by Michael Ward.

Most discussions on the Tubolare Zagato cars major on the earlier TZ1, with merely a nod in the direction of the TZ2. This is one of the greatest Italian racing car tales whose story has rarely been told.

First, we need some background on Autodelta. Formed in 1963 by Ludovico Chizzola and Carlo Chiti in Udine, Autodelta’s primary objective was the assembly of the TZ1 and running Alfa Romeo’s works racing team. The original TZ forged exactly the kind of reputation Alfa Romeo had hoped for in events such as Le Mans, the Nürburgring 1000km and the Targa Florio, and the marriage of Alfa Romeo and Autodelta was one made in heaven.

To start, Autodelta functioned as a completely separate company, about which Alfa Romeo became increasingly concerned. The board felt that it should have at least a share in a company that was handling the reputation of its brand. At the end of 1964, Autodelta was incorporated and Alfa Romeo bought in straight away; in 1965, Autodelta was moved to Settimo Milanese, in other words, closer to home. Chiti accepted the decision and moved back to Milan.

Chizzola refused to move from Udine and effectively left the company, which in turn led to Autodelta being absorbed into Alfa Romeo as a racing department with Chiti at the helm. It was during all of this political wrangling that they were trying to develop the TZ2. And it wasn’t to end there. By 1965 sports prototypes were becoming crucial and Alfa Romeo was already considering such a car (the eventual Tipo 33).

In addition, while the TZ1 had fulfilled its marketing role to the parent company, the arrival of the Giulia GT and the development of the GTA would provide similar exposure in a car that looked closer to showroom spec. Against all of this ‘in-house’ opposition, it seemed that the TZ2 did not stand a chance.

That the TZ2 turned out as brilliantly as it did is probably because the best work on developing the car was done before the move from Udine. Compared to the original, the 1600cc engine was further tuned using an eight-plug cylinder head similar to that fitted to the GTA. It now developed 170hp at 7500rpm instead of the original 112hp. It was also dry-sumped, which allowed for a lower bonnet line. In addition, the suspension and steering points were reviewed to allow the whole car to sit lower. And finally, although the first one was still aluminium-bodied, most of the new cars would have a new, more aerodynamic and lighter body made from glassfibre.

The TZ2 secured class wins in the Targa and Sebring in 1965 and 1966 before the works programme effectively stopped to focus attention on the Tipo 33 and GTA, both of which went on to secure Autodelta’s place in the history books. As far as everyone was concerned, the TZ2 was then yesterday’s racing car.

Except for one person because over a year after the penultimate TZ2 had been built, Carlo Chiti was persuaded to produce one more car for a very good customer. Aldo Bardelli was one of the many gifted amateur Italian drivers of the period and already the owner of a TZ1. One last ‘super’ TZ2 would be made for him in 1967, benefiting from all the development of its predecessors and also of its peers. The engine for instance, would be a 2.0-litre version of the twin-cam, still with an eight-plug head – effectively a GTAm engine running on Weber carburettors instead of fuel injection. The wheels would be larger than on the others, 6.5J on the front and a massive 9.5J on the rear, the latter being effectively the front wheels from a 33. Chiti insisted on this modification and one can only assume it was because the TZs always had a reputation for unpredictable oversteer.

Bardelli was competing in TZ2 chassis 117 as early as June 1967 and clocked up various class wins throughout 1968 before entering ‘the big one’, the Targa Florio, in May 1969. Alas, on the third lap Bardelli crashed into a ditch and damaged the front end significantly enough that his race was run. The car was easily repaired but never again used in anger. The TZ2’s shape is arguably prettier than the perpendicular TZ1’s – a kind of ‘miniature GTO’ – and only 37.5 inches in height. Being based on Giulia running gear, it has the practicality of sharing many parts with everyday Alfas.

On the road, 117’s engine is understandably flat at low revs, though sounding surprisingly similar to any other Alfa twin-cam with its blaring inlet roar. The cabin heats up very quickly and smells pungently and rather worryingly of hot glassfibre. Once on cam at around 4000rpm, the engine pulls really strongly and the driver can slice through the Giulia five-speed gearbox very quickly. As the speed increases, the erstwhile dead feel from the steering and the tramlining racing rubber wake up and the car suddenly explodes down the road. It is easy to see how this car could be so competitive. It is so small, nimble but with plenty of grip and with serious performance because of its minimal weight.

So how many TZ2s were made? Some sources state that, unlike the TZ1, the second series was only ever used by the works team in period and not sold to private owners until the works effort ceased. This would go some way towards explaining the confusion of numbers and specifications as no records would have been needed. However, somewhere between nine and 12 examples is the established thinking.

It’s such a shame that there were not more. Blame the political turmoil at Autodelta or blame the incoming Tipo 33 and GTA, but the TZ2 star was one that shone all too briefly.

It’s not often you get the chance to drive a TZ2 – it’s a truly heady experience on so many levels.