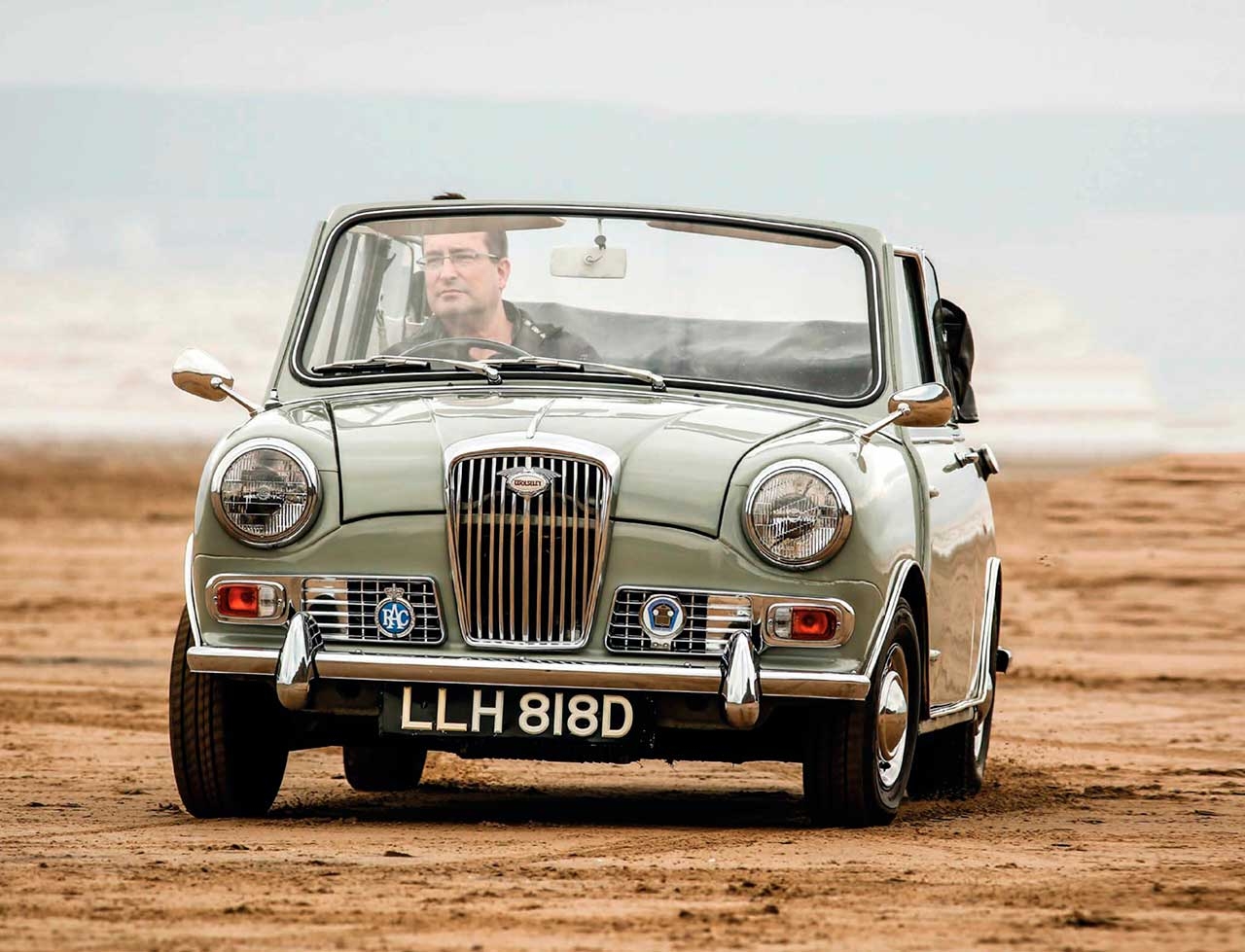 Crayford’s souped-up Wolseley. Hornet by Heinz. The drop-top Wolseley for winners. Just 57 Hornet convertibles were produced for a Heinz giveaway in 1966, says Andrew Roberts as he heads to the seaside in a superb survivor. Photography Tony Baker.

Almost constant drizzle and a chilly breeze. Curling egg-and-cress sandwiches and a Thermos of lukewarm oxtail soup are followed by slices of Bakewell tart. Dad, resplendent in his second-best sports jacket, complains about the length of Ray Davies’ hair and how the new ‘01’ London dialling code is really a Communist plot. Mum reads The People’s Friend and dreams of Frankie Vaughan, while the offspring attempt to tune into Radio Caroline on their transistor, only to receive the less-than-hip sounds of the Northern Dance Orchestra. But at least the Hornet convertible captures that essential holiday spirit.

Yes, thanks to winning the Heinz Greatest Glow On Earth competition, the family transport is now a drop-top Wolseley with a pushbutton radio, a make-up tray filled with Max Factor’s finest cosmetics, seatbelts fore and aft, a fully stocked Brexton picnic hamper and a tartan rug.

To pay tribute to one of the most delightful versions of the Mini, we’ve brought Kevin Ford’s Hornet to the Somerset coast, where all that is needed for a proper 1966-style day out is a windbreak and a bottle of salad cream in the insulated food cabinets. My favourite detail is the electric kettle that is powered from a socket in the boot; the Wolseley may date from the era of Revolver and the famous Time magazine article Great Britain: You Can Walk Across It On the Grass but in the provinces, everything still stops for tea.

The Mini range had blossomed in 1961, with the debuts of the pick-up, Cooper and Super, while October marked the launch of two further derivatives that brought ‘luxury and distinction to Mini motoring’ – the Hornet and its slightly more expensive stablemate, the Riley Elf. Both had a heater and windscreen washers as standard, as well as modified styling courtesy of Ricardo ‘Dick’ Burzi. If the vestigial tailfins looked a touch flamboyant, the extended boot meant that there was a useful amount of extra luggage space. Naturally, a badge-engineered compact saloon aimed at bourgeois drivers was never going to find favour with Alex Issigonis, but for the next eight years the Elf and Hornet would become a familiar sight in outer suburbia.

It could be argued that the Wolseley and Riley were as much a part of the Mini’s story during the ’60s as the Cooper, because they occupied a distinct niche within the British car market. The Hornet’s main appeal was to those who wished to make a tentative step into this bold decade without sacrificing their dignity. The illuminated ‘Ghost Light’ was a talisman of hard-won middle-class status, because a new duotone Wolseley belonged on the driveways of motorists who secretly feared being deemed below the pale. The front-wheel drive and transverse engine may have appeared a little radical, but the walnut-veneered instrument nacelle was reassuringly respectable. For those who craved yet more comfort (twin lidded gloveboxes), the Riley Elf was only an extra £22. There was no point in being overly extravagant; after all, what would the neighbours think?

The Elf and Hornet gained leather trim in 1962, and the ’1963 MkII had a 998cc engine with a single carburettor. From October 1964 they were fitted with Hydrolastic suspension, while the MkIII of 1966 gave us winding windows, dashboard-mounted fresh-air vents and, at last, a remote-control gearchange. Some 28,455 Hornets and 30,912 Elfs found buyers before being replaced in October 1969 by the Clubman, the version of the Mini that ushered in a new age of dreadful fashion sense. The Riley even enjoyed a measure of cinematic fame in The Witches, a ’1966 Hammer production in which the good ladies of a home counties village practise black magic between bouts of cake-baking. Meanwhile, for drivers who craved an openair version of the Mini, David McMullan and Jeffrey Smith of Crayford Engineering launched their Mini Sprint in 1963 – ‘A real convertible for the family man’ and quite a bargain at £690.

There was also the Taurus-tuned Viking Sport drophead that was based on the Hornet and, in 1965, McMullan and Smith were approached by Heinz executives. The open Minis had been attracting a considerable amount of publicity, with a Sprint guest-starring with Albert Finney in the ’64 drama Night Must Fall, and the food manufacturer wished to devise the ultimate automotive prize for its latest soup promotion.

It was decided that Crayford would produce 57 bespoke Hornets, with Heinz insisting that the firm could not make Wolseley convertibles for any other client. The commission represented an excellent PR coup for the coachbuilder but also its largest order to date, meaning that a year was needed to convert the cars. By the end of 1965, it was facing the vexed issue of storage. At that time, McMullan and Smith were building Mini Sprints plus open-top Ford Cortinas in their own garages, and there was no additional space. The fee from Heinz would eventually prove instrumental in establishing their factory in Caterham, but for the time being a solution was found that would have made an excellent plotline for a Carry On film. Thus, that winter, the Hornets were stored on the tennis courts and car park of an out-of-season nudist camp.

The competition was announced in early 1966, with extensive media promotion for the Hornet that ‘you can’t buy anywhere’. Entrants were required to pair eight Heinz soups with a superb mid-’60s array of main courses – for example, Cream of Tomato with ‘liver sausage salad’. They also had to complete the phrase ‘I like to take Heinz soup on a picnic because…’  and select whether they wished to win a Toga White or Birch Grey Wolseley. Then, having remembered to enclose two labels with each application form, there was an eager wait for the names of the winners to be announced in May.

In the event, Heinz received more than a million entries, for who could have ignored the opportunity to take the wheel of such a magnificent machine? All 57 sported an ‘LLH…D’ registration, and you could even have your own monogram applied to the driver’s door. This detail would almost certainly have caused amazement at the local Rotary Club – and envy from every Herald owner in the district – but, according to Ford, the option was sadly never taken up.

Today, 43 of the prize Hornets are believed to survive. Ford bought his about 19 years ago: “And I am still trying to discover the name of the original owner.” At that time, the Wolseley was in pretty ropey condition: “It looked sturdy but in fact, it needed a lot of TLC. The carpet covered what it touched, and the roof had shrunk over the years.” At least the red leather upholstery was in good order and, as far as the extra equipment was concerned, he was very lucky: “It had the make-up box, although I am still looking for an original rug and hamper; what you see here are the nearest approximations I could find.”

Ford believes that the food lockers in the rear compartment boxes were such a clever idea that: “BMC should have offered them as an option. You can even use the lids as an elbow rest of sorts.” His Hornet is also still equipped with its kettle, although the owner warns that “using it can drain the battery in about 10 minutes flat”.

From a 2017 perspective, the Crayford drophead conversion does seem to be better suited to the Wolseley than the standard Mini and, when gently cruising along the sands, the sense of nostalgia is almost overwhelming. There is the ‘magic wand’ gearlever, the bouncing motion from the Hydrolastic suspension and the stiff catches on the sliding windows – all experiences that will be immediately familiar to anyone whose family once ran a Hornet MkII. Add a very well-executed hood and the result is one of the most enjoyable convertibles of the 1960s. Unlike the earlier Viking Sport, the 57 retains its rear side windows, the better to protect the occupants from a British summer.

Charm is an almost impossible quality to define in a classic, but it is one that’s possessed by Ford’s Wolseley in vast quantities. As the day draws to a close and it begins to rain, it is the return journey from the beach that forms my favourite memory of the shoot. The sounds of the wiper motor and heater making a succession of clanking noises to no great purpose really conveys the atmosphere of a typical day out from 50-odd years ago. Perhaps the only element that is really lacking is music from the BBC Light Programme on the wireless blending with the note of the A-series engine.

Thanks to Kevin Ford; The Crayford Convertible Car Club: www.crayfordconvertibleclub.com

THE COMPETITION WAS ANNOUNCED IN EARLY 1966, WITH EXTENSIVE MEDIA PROMOTION FOR THE HORNET THAT ‘YOU CAN’T BUY ANYWHERE’

The Hornet’s delightfully patinated cabin features leather and walnut, but Mini origins are obvious. Above: Crayford crest on the Wolseley’s side.

The Hornet’s delightfully patinated cabin features leather and walnut, but Mini origins are obvious. Above: Crayford crest on the Wolseley’s side.