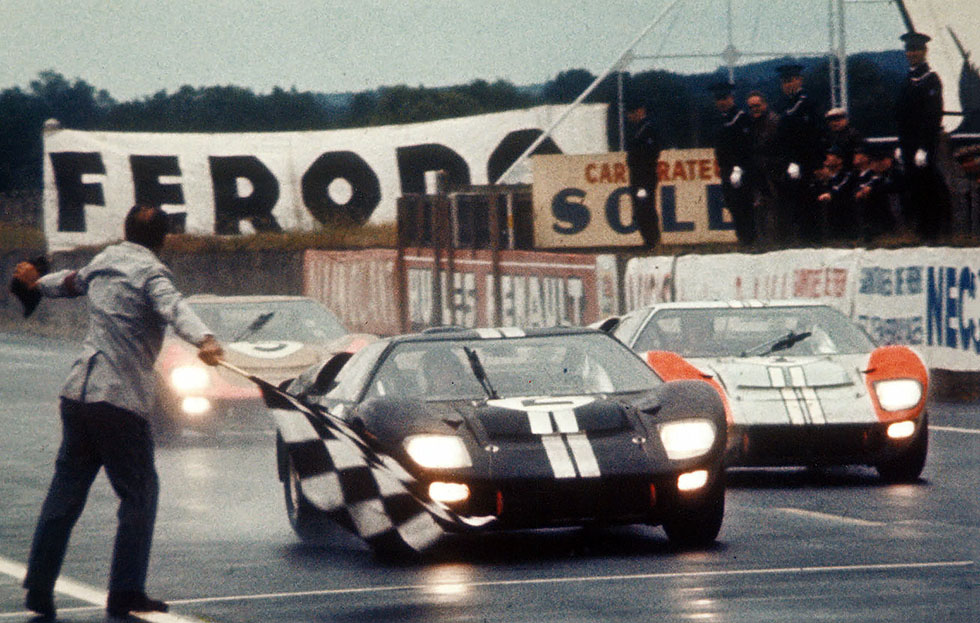 Legend of Le Mans. The Ford GT40 was seriously fast; we take a look back in time. If you can’t join them, beat ’em. Almost half a century ago, Ford rubbed Ferrari’s nose in wet tarmac as it claimed a podium clean-sweep at the 24H of Le Mans. Here’s how they did it…

Just a couple of months after I emerged into the world, a small town in central France, on the banks of the La Sarthe river, bore witness to one of motorsport’s most impressive turnarounds. Just two years after they first appeared – and failed – at the world’s greatest motor race, Ford enjoyed a remarkable one-two-three at the 1966 24 Heures du Mans. The story of how they did it is a genuine old-school, round-the-campfire tale of perseverance and guts, eschewing finesse for overengineering and brute force. 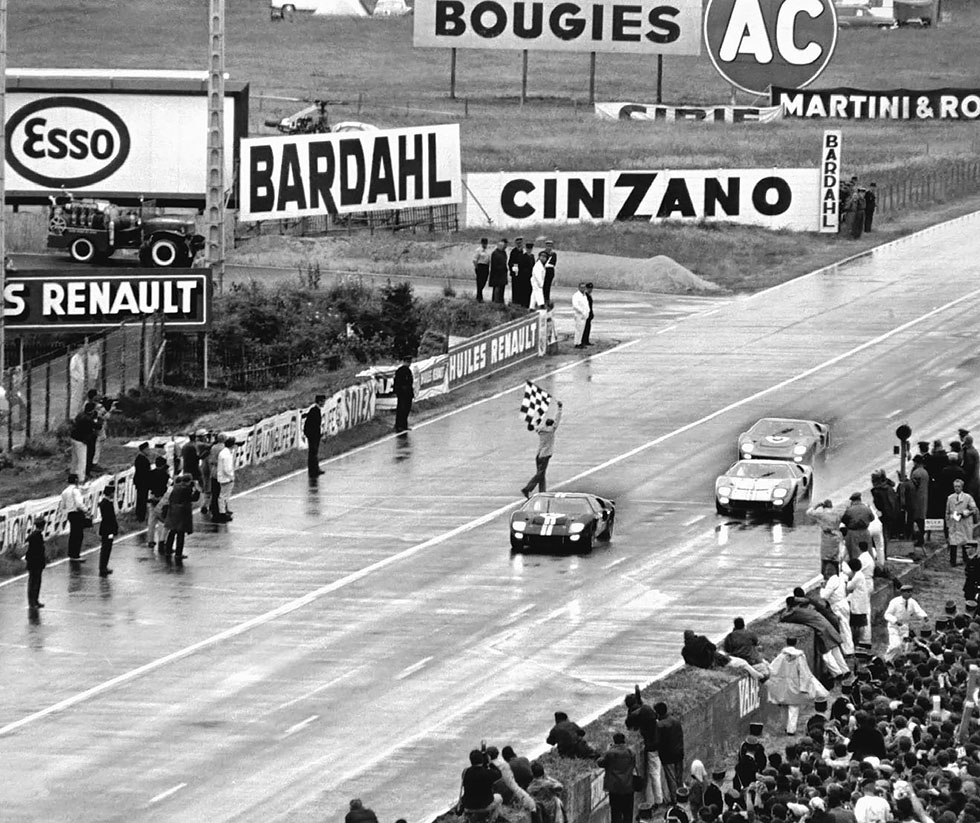 It all began when Enzo Ferrari backed-out of a deal, three years and several million dollars in the making and instigated by himself, for Ford to buy the iconic Italian brand. The idea was Ford would run the road car side and Ferrari would retain control of the motorsport arm but, inevitably, opinions differed along the way. But when Ferrari pulled out, it irked Ford – more because of the wasted money, time and effort on due diligence than anything – and Henry Ford II himself decreed that Ferrari would have to pay – publicly, on the racetrack. The track in question was the collection of public roads to the south of the sleepy town of Le Mans and the weapon to do it was the GT40. 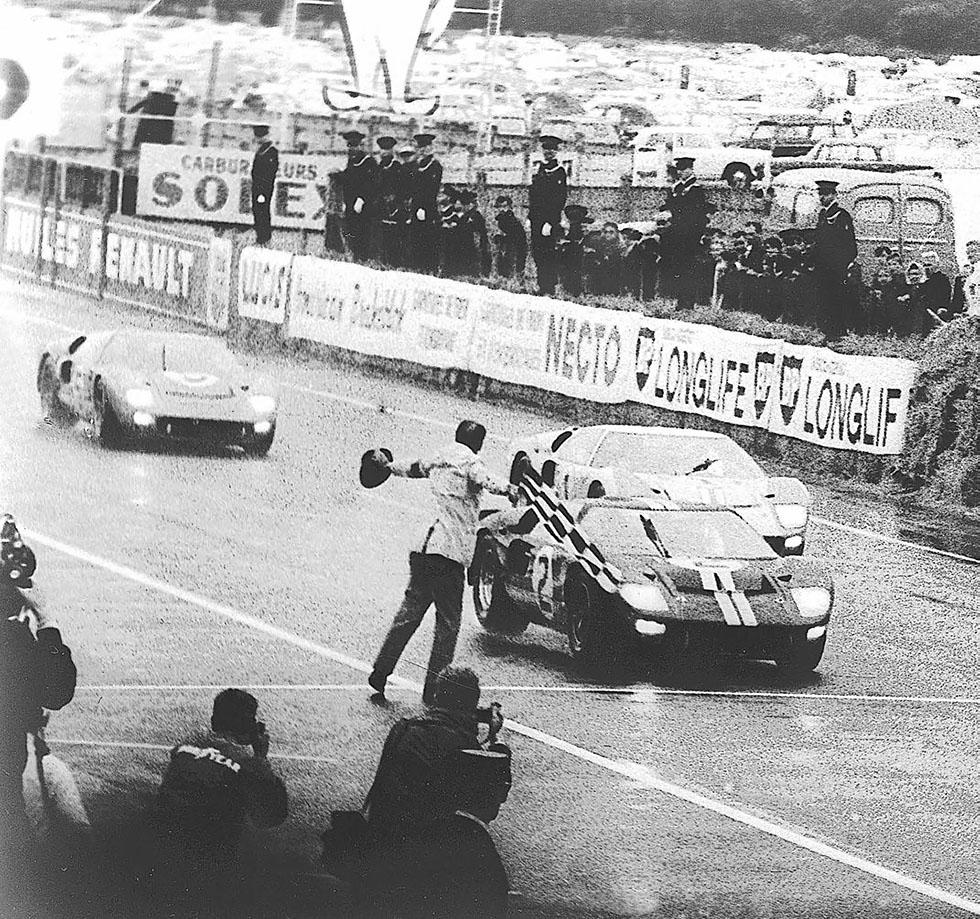 The ’40 debuted at La Sarthe in 1964 and was a spectacular failure – all three Mk1 GT40s failed to finish the race and Ferraris took first, second and third. Ford went back the following year with a mix of Mk1s and the bigger-engined Mk2s and again, none of the six cars entered finished the race. Predictably, Ferrari won again. However, by the time the 1966 season began, things were turning Ford’s way. Carroll Shelby had been involved with preparing the race GT40s and the results were plain to see – the marque had already secured a podium lock-out at the 24-hour race at Daytona and the blue oval took another 1-2-3 at the 12-race at Sebring, albeit with only one Mk2 GT40 in the mix.

So it was that the American brand headed for La Sarthe with no less than eight Mk2 cars, running under three team banners – Shelby, Holman Moody and Alan Mann. They faced a pair of works Ferrari 330s with another entered privately and a host of private 275 GTBs. So the game was on…

The Le Mans weekend nowadays seems either to be a heatwave or a typhoon with little in between but in 1966 it began damp, became dry and then came wet again on Sunday. Starting on Saturday afternoon 30 minutes after a rain shower, it wasn’t going to be an easy 24 hours of racing by any stretch of the imagination. As the race went on, the five Mk1 GT40s entered all retired, notably with Jochen Rindt/Innes Ireland’s car holing a piston after three hours and Jacky Ickx’ engine expiring at the 11-hour mark. Guy Ligier and Bob Grossman’s car went five hours later with ignition failure, just after the engine on Peter Revson and Skip Scott’s car died. The last Mk1, of Peter Sutcliffe and Dieter Spoerry, made it to 17 hours – 08.15 on Sunday morning – before its weekend ended with an accident. 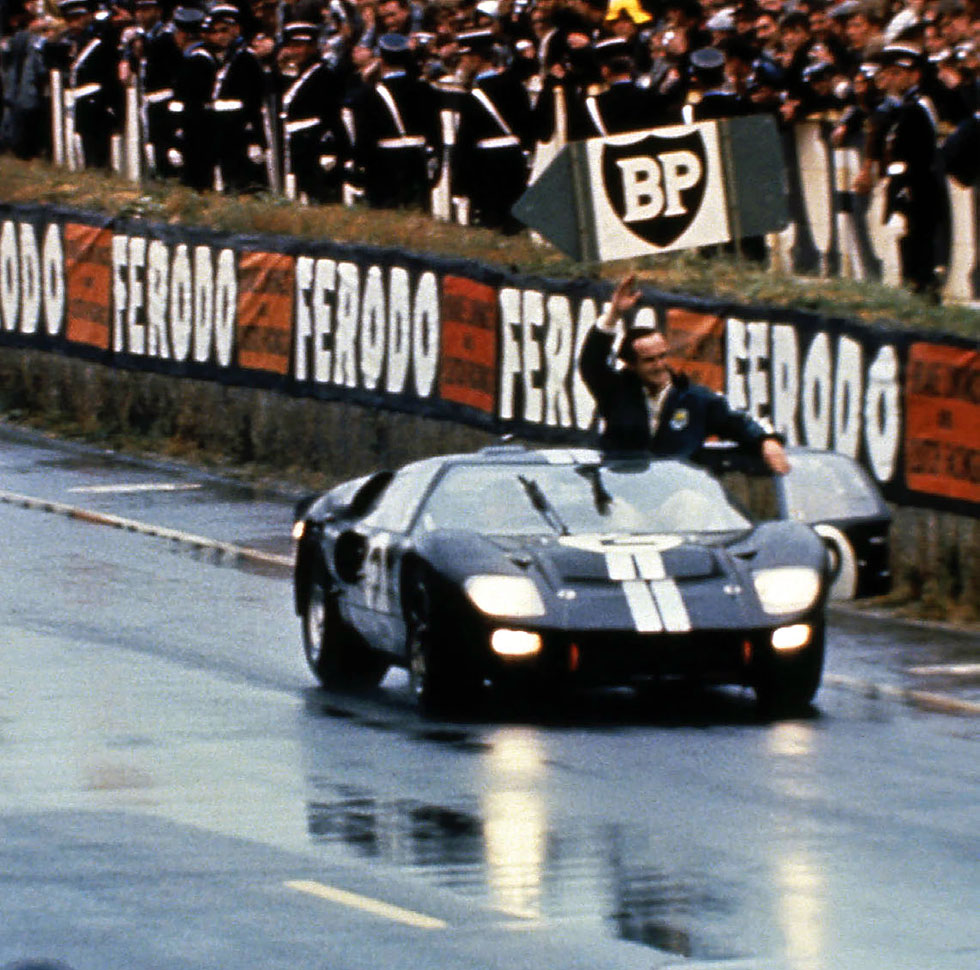 The fate of the Mk2s wasn’t so much easier. The first went at five hours, with a differential problem and the second, an hour later with clutch failure. Legend Mario Andretti’s car had head gasket failure two hours later, an hour before Graham Hill’s car lost its front suspension.

The last retirement was just four hours before the end of the race, when the car driven by Dan Gurney and Jerry Grant picked up a damaged radiator and that was that. However, things were going even more wrong for the Italian squads; one of the 330s crashed literally as the clock turned over to a minute past midnight with the North American entry going out with gearbox failure in the 11th hour. The third and final works 330 lasted until the 17th hour when the engine let go, giving Ford a works Ferrarifree run to the flag.

But things are rarely easy at Le Mans; three Mk2s set the pace, establishing the running order and while they clearly had the measure of the high speeds at Le Mans – this was when the Mulsanne Straight really was a 6km straight, before the chicanes were added to slow the cars down – the sole Chevroletpowered Chaparral entered kept them honest, running within a handful of seconds of the GT40s’ pace until it retired with electrical failure.

While the race was a first for so many reasons, it very nearly didn’t take place for Ford at all. The organisers said that they wouldn’t let Dick Thompson drive in the race after he hit fellow GT40-driver Richard Holquist. Ford was on the verge of pulling all its cars from the race in protest, with Porsche’s backing, until some more level tempers arrived and smoothed the whole thing over.

There were still the demands of Le Mans to deal with though, with each of the GT40s requiring replacement brake pads along with tyres at most changes and even new discs during the course of the race. The Mk2s were a good halftonne heavier than the Ferraris and a tonne more than the Chaparral and with their massive seven-litre engines and huge terminal speeds along the Mulsanne, the brakes were always going to get a hammering.

Still, they weathered it through and approaching the finish of the race, it was Ken Miles and Denis Hulme in the lead in the No.1 car, despite a dreadful start and problems getting the door shut early on. They had also pushed hard to take the lead from Gurney, which he had held for most of the race before going out a few hours before the finish. 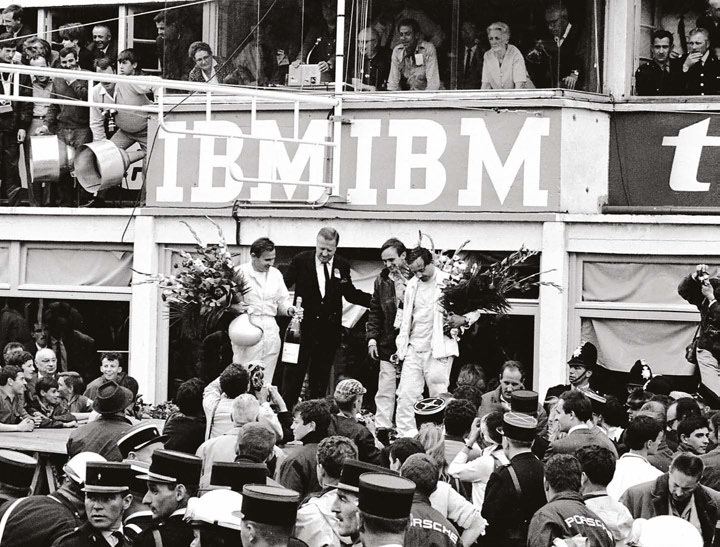 Second place was held by Kiwis Chris Amon and Bruce McLaren in No. 2, who had been running on Firestone tyres, thanks to a personal relationship between McLaren and the tyre brand. However, the tyres weren’t holding up and Ford took the decision to swap the car onto the same Goodyears as the other cars to get to the end of the race.

Third place was occupied by car number 5, driven by Ronnie Bucknum and Dick Hutcherson although they were some dozen laps behind. With Henry Ford II in attendance, it was inevitable that the issue of who should win and how would come up. Nowadays, it is customary for the last couple of laps to be a chance for manufacturers to jostle their cars into position for the all-important finish shot, with two, three or more cars crossing the line together, irrespective of how many laps are between them.

However, back in 1966, it was unheard of, but Ford told Miles and McLaren before they got in for their final respective stints to the finish to cross the line side by side, for a tie. But the organisers clearly had wind of it and informed Ford that because the race winner was determined on the greatest distance covered, if the two cars, of Miles/Hulme and McLaren/Amon crossed the line side by side, they would deem Amon/ McLaren the winners, since they judged that their car had been around 50 feet further behind Miles and Hulme at the start and hence, covered greater race distance.

This is where whys and wherefores of a near 50-year past race differ, though only slightly. The facts are plain to see – Miles, driving the No. 5 car, slowed to allow McLaren, in the second-placed No.2 car, to draw alongside, for a monumental shot of the first time two American cars won at Le Mans. The No.1 car was just behind the pair on the road. 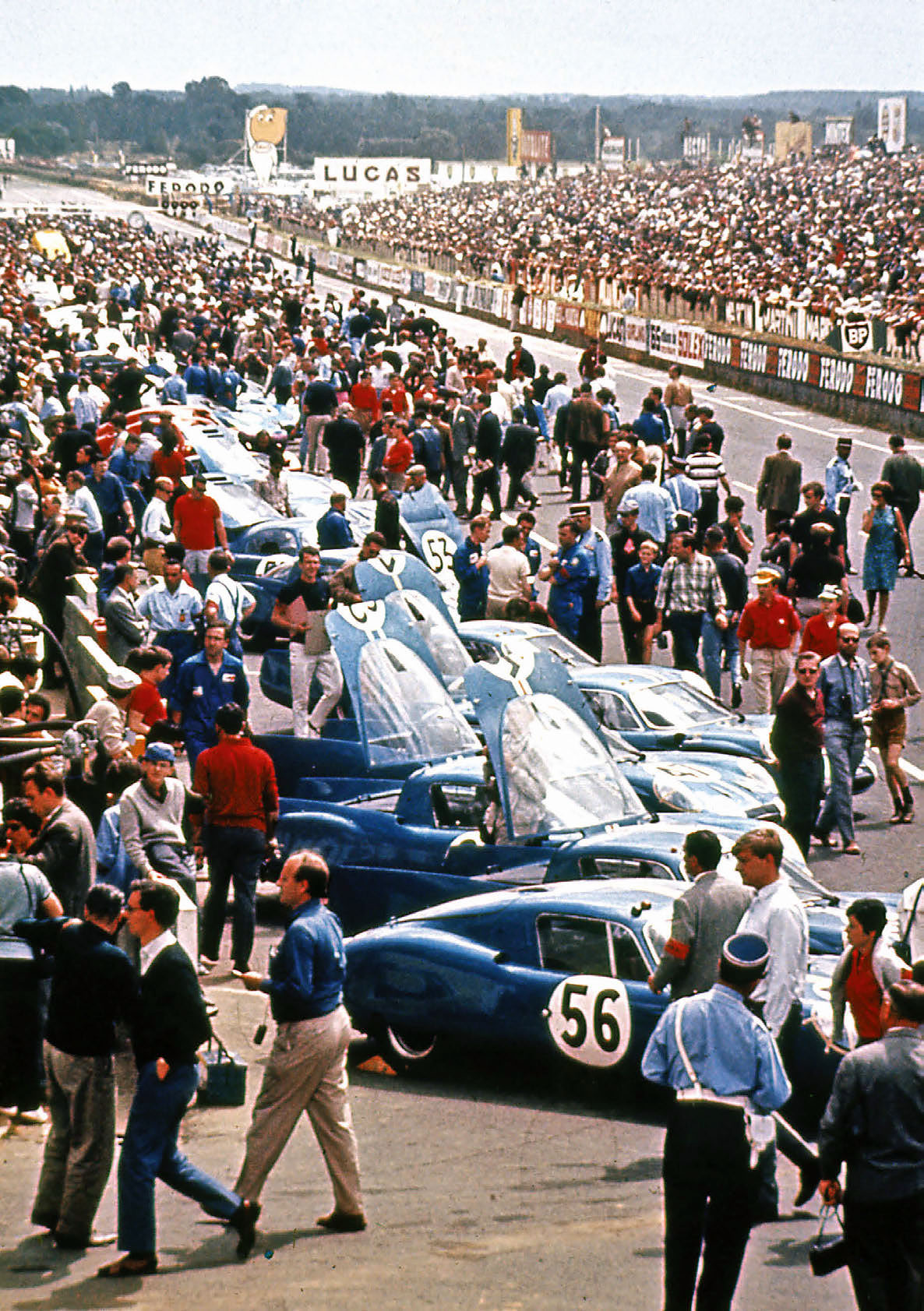 However, as they crossed the line, Miles suddenly backed-off, allowing McLaren to finish just ahead. That, and the advantage of the greater distance, meant that he and Amon were recorded as winners, with Miles and Hulme second.

Despite this controversial finish, one simple fact remains: Henry Ford II got to see his cars utterly annihilate Ferrari and in doing so, claim a raft of records; the fastest race lap of Le Mans, at an average of 125.4mph; the lap record, Dan Gurney in qualifying of 142.9mph; greatest race distance, of 3,009.4 miles (against Miles/Hulme’s 3,009.8 miles).

Ford went on to win the race the following three years and in 2015, on the 50th anniversary of that monumental victory, will return to La Sarthe as a factory squad with the all-new GT running in the GTE-Pro category, to do battle with its old foes, Chevrolet and, of course, Ferrari. Funny how history has a habit of repeating itself…

WHERE ARE THEY NOW?

Bruce McLaren Died 2 June, 1970, aged 32. Established McLaren Racing, which continues to this day in Formula One.

Chris Amon Talented F1 and sportscar driver. Retired from motorsport in 1977 to run a farm in native New Zealand.

Chassis P/1046, Car number 2 Having been through many, many pairs of hands, the actual racewinning GT40 Mk2, chassis P/1046, is currently owned by RK Motors of Charlotte, USA, and is being restored to the specification in which it ran at the 1967 24 Hours of Daytona. The company is aiming to debut the car at the 2016 Pebble Beach Concours d’Elegance.