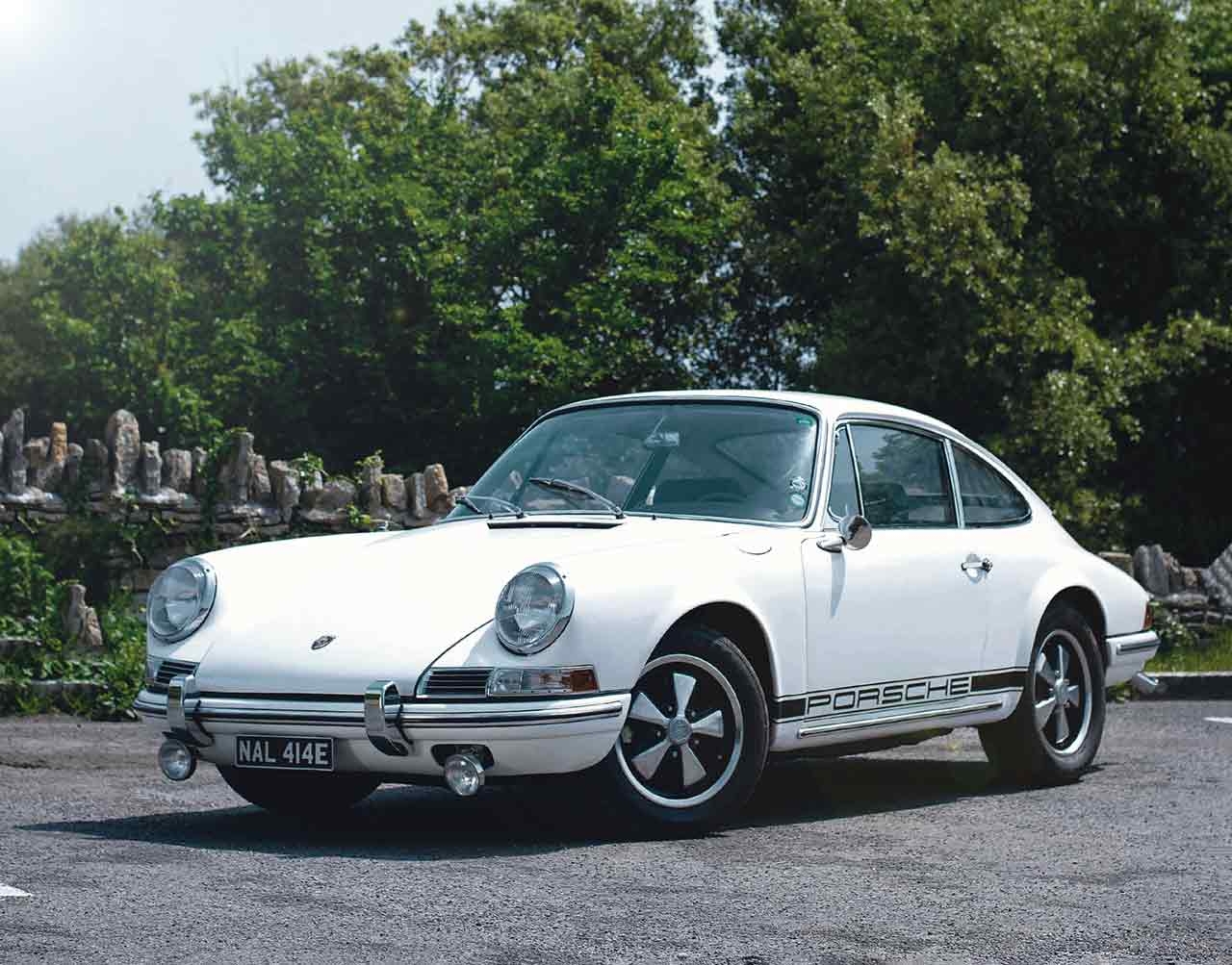 A 912 is your last chance at owning a classic, preimpact bumper Porsche for sensible money. Can it fill the void left by its more expensive 911 cousins? Story & Photography: Rich Pearce.

Power To The Four 912 Affordable classic

It’s well known that Porsche’s idea to streamline its 911 production line with that of a lesser, entry-level model at the end of the 19th century very likely saved the company from extinction. A commonality of parts between the 996 and 986 Boxster platform meant the books could be balanced by maximising revenue while minimising costs.

It proved an ingenious move, but what people may not know is the practice had been seen before at Porsche, albeit some 35 years earlier. After 15 years of 356 production, Porsche sought new horizons with its now legendary sports car. Cue Butzi’s timeless design of the 911, then named 901, its sleek, flowing silhouette and powerful flat-six engine lighting up the Frankfurt motor show of 1963.

Soon after capturing the imaginations of journalists and the public alike in Frankfurt, production of Porsche’s new 901 model began in earnest, the first 82 being delivered in that year before Peugeot took issue with that ‘0’ in the middle of its designated model name. But it wasn’t just the 901 which had its nomenclature forcibly changed: the same fate became of the 902.

“A 912 represents the last affordable entry into long bonnet ownership”

Right from the launch of its 911, Porsche wanted to offer a similar car at a more affordable price point, with a basic parts share principle to – you guessed it – minimise costs and maximise profits. The 912 was born: Butzi’s now famous design for the 911 would remain, though that familiar flat-four engine from the outgoing 356 was lurking under the chrome-slatted decklid instead of a flat-six. Porsche’s young engineer, Hans Mezger, had developed a flat-four version of the flat-six powering the 130hp 911 for its sister 912, but the design was ultimately dropped: Porsche had thousands of parts for the outgoing 356’s flat-four and opted to put them to good use instead, mated to a four-speed gearbox.

The concept of having a familiar engine housed in an all-new chassis was nevertheless an instant success story: by 1965, Porsche had sold double the amount of 912s compared to 911s, and by 1969, of the 12,800 911s and 912s sold, a mighty 9,000-strong were 912s. Half of these were bound for the United States. The 912 had a revised specification over its superior 911, with a paring-back of luxuries in order to justify a price point similar to the 356 before its discontinuation. The differences, really, were only subtle: 912 drivers had to make do with three instead of the usual five dials in the 911’s instrument cluster, though by 1968 all five were in use in the 912 too. Otherwise the differences mainly fell to the interior upholstery.

Ultimately, it was that ‘regenerated’ flat-four engine which proved the car’s downfall after just five years. Faced with stricter emissions regulations which Porsche knew its 356-derived Type 616 engine would not pass, the company shelved its 912 in 1969, replacing it with the 914 as the new entry-level Porsche vehicle.

In the 50 or so years since, the 912 has endured a fate typical of its status as an entry-level sports car: as prices fell, detailed restorations weren’t by any means economical, many were modified or simply left in various states of disrepair. Bodge jobs weren’t uncommon, with one specialist description of them as “long-time Californian students’ cars” giving some idea as to the level of investment and upkeep likely to have been placed into the model over the years. Only a very few were kept pristine.

Hanging on the coat-tails of its sister 911, values of the 912 have appreciated considerably in the last four years. however, today a 912 represents the last affordable entry into long bonnet Porsche ownership – though this isn’t likely to remain the case for too much longer. A project car in need of work can be had for £25,000, though a concours car will already set you back as much as £60,000. Shoehorning a flat-six engine into the car (known colloquially as a ‘912/6’) has historically been a popular modification but today an original car, such as the one is our pictures, is considered just as desirable. In splendid condition throughout, we’ve been thrown the keys to this daily-driven example of a 912 to help us ask the question: is it a worthwhile purchase for those craving that hallowed long hood classic Porsche look?

As we’ve discovered, to all intents and purposes the 912 ‘looks’ like a pre-impact bumper 911, its steel body construction and simplistic curves identical to its bigger brother. Helped further here by the presence of optional Fuchs wheels (Porsche’s iconic leaf design alloys have found their way on to many 912s) plus a re-profiling of the 912’s delicate arch flares for more of an aggressive look, there are little clues present to give the game away that this is the 911’s poor relation. Spurred on by that iconic, purist silhouette, we’re excited to climb in and go for a drive.

Taking our place inside the cabin presents a similar feel to that of an early 911. Green dials ahead of us are reminiscent of the early cars, the 912 employing the same ventilation system (by way of the opening front quarter window) as its flat-six counterparts too. There is a distinct lack of refinery in materials used, of that there is no doubt (last of the line cars from 1969 were fitted with pepita patterned seats borrowed from the 911) though the presence of an optional five-speed 901 gearbox and wonderful Momo Gritti steering wheel makes up for this.

Bringing the flat-four to life with a turn of the key and a little application of the gas pedal, I slot the shifter into its dog-leg first gear and pull the 912 away from a standstill, pootling through the countryside while the car is brought up to temperature. This gives me time to familiarise myself to the surroundings and drink it all in: the sights of those pronounced front quarter panels ahead of me, the faint smell of a little oil being burned, and the sweet sound of a 50-year-old flat-four engine powering us up the road. Equipped here with superior Webers rather than the standard-specification Solex carburettors, it’s still missing that gruff, meaty note of an early flat-six, though in our modern world of sound symposers and faux exhaust noises the mechanical richness of the 912’s flat-four is just as alluring.

Driving into town, we get many an appreciating nod from old and young –­I can’t recall the last car I drove that garnered so much admiration from so many onlookers. We soon leave the town behind and push on into the country, working up through the five forward gears of the 901 gearbox.

Precision is needed for each change, the car not responding well to a rushed cog swap, but no matter, for the 912 suits a more laid-back driving style. That rev needle certainly doesn’t whip round the taco with anything like the same vivacity as in a 911. The 912 is very much a momentum car then, encouraging you to build your speed and then maintain it as you sew each corner together. It’s absolutely outstanding fun: the car feels alive, its steering wonderfully direct and reacting to even minor inputs through the wheel. Though it’s lighter than a 911 at the back, that weight at the rear is still keenly felt in the 912, particularly in a short-wheelbase model such as this.­ Your inputs must be smooth to keep the car balanced, here sharing the inherent traits of that coveted sister car.

A slightly different approach is required to driving the 912 then but, crucially, at no point during the drive am I left wanting to be at the wheel of a 911. For similar money to a 911T, a 912 offers 80 percent of the classic Porsche driving experience. If you can look past the fact there’s no flat-six under that rear decklid, a 912 makes for a cracking classic purchase – though you’ll have to be quick. Porsche enthusiasts, and the wider classic car community for that matter, are waking up to the 912’s charms as more and more examples find their way to Britain from the United States. Power to the four, indeed.

Although the long bonnet 912 bowed out of production in 1969, Porsche revived the model, albeit momentarily, in 1976 with the arrival of the 912E. Now clad with impact bumpers in line with the 911’s G Series specification, the model was destined for the United States only, as Porsche sought to bridge the gap between the outgoing 914 and transaxle 924 as the company’s entry-level car. Like the pre-impact bumper 911E, the 912’s ‘E’ stood for ‘Einspritzung’, or fuel injection, and came fitted with a 2.0-litre Bosch D-Jetronic flat-four carried over from the outgoing 914. Just 2,099 models were sold, all in coupé body form.

“The mechanical richness of the 912’s flat-four is alluring”