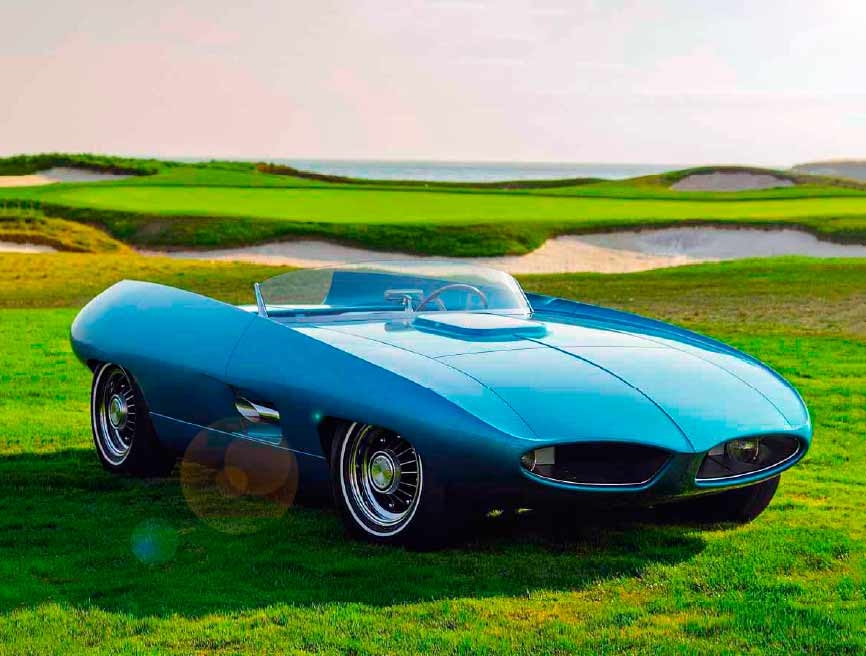 The garage door opened to reveal a familiar shape. Then the lights came on. First to strike me was the hue of the blue paint. So much blue – everywhere; even the gauges are Stewart Warner Twin Blues. I opened the door, slid into the seat and, with a tremble of excitement, reached forward to the key. A snap clockwise and the 370ci V8 ignited instantly, yet its guttural burble could only hint at what came next.

I’d been dreaming about this moment for eight years. Not having seen the car in the metal for nearly 22 months, I wasn’t sure what to expect. There’d been an endless stream of progress snapshots during the restoration, but we all know that photographs can deceive. Only at this moment was I finally seeing the result of a very long journey. Only now was I at the wheel of my freshly restored 1965 Pontiac Vivant. At idle the open exhaust pipes filled the air with atomised petrol. Blipping the throttle, I could hear and feel the melodic overlap of a Super Duty camshaft.

Inside, the seats were low and supportive; the steering wheel and shifter knob ergonomically positioned. As I slipped the Muncie four-speed into first, I was taken by the ease with which the Hurst shifter carried out its business. Everything on this car feels modern – even though it was built more than half-a-century ago.

I knew I should gently roll onto the gas but couldn’t help myself and buried the pedal. Instantly the carburettor butterfly slammed open and I was completely unprepared. The throttle response is beyond astonishing and the car launched like a rocket-sled. What a dichotomy: the Pontiac Vivant wears the face (and wings) of an angel, yet it’s powered by a fire-snorting dragon.

Once the shock of cheek-distorting acceleration subsided I began to explore the car’s character. Its steering is quick and precise and encourages spirited driving and, at both turn-in and exit, the Vivant is firmly planted and well-balanced. But with so much raw power on tap it was all too easy to step the back out. With a little practice I was power-sliding turns with my right foot, ever thankful that the large aluminium finned drums could bring me to a rapid stop. Stopping is something the Vivant does very well, because the equipment was designed to halt the mammoth Pontiac Catalina – fully 778kg heftier.

Once at a cruise I was lulled into the notion that this car is easy to drive at any speed – with 405 horsepower on tap and weighing just 1111kg, it is among the best-endowed sports cars of the 1960s. After exiting a sweeping left-hander, I crested a hill and was unable to resist the long straightaway before me. Again, down went the accelerator – hard. With smoke spewing from the Firestone Super Sports Wide Ovals, the rears grabbed tarmac and I watched the needle surge its way round the revcounter. This car pulls harder than anything else I can recall.

All the frenetic restoration work of those 22 months was for a purpose: to take the Vivant to the 2017 Pebble Beach Concours d’Elegance. The car was entered in the ‘American Dream Cars of the 1960s’ class. And on the morning of the concours I began to rehearse what I would say to the judges; how the Vivant came to be and my voyage leading to this moment.

The Vivant was designed and built by famed Pontiac engineer Herb Adams, who is considered to be the father of the Firebird Trans Am, the GTO Judge, and the 455 Super Duty engine. Adams was an innovator in more than one field: although his degree was in mechanical engineering, he was also a prolific designer.

As quickly as he rose through the ranks of Pontiac, he observed the limitations of working within a large corporation. Yes, he was one of the most active GM engineers of the DeLorean era, with multiple projects approved for production – yet Adams wanted more. He wanted to design and build an ultra-high-quality sports car with uncompromising performance and visual impact. He wanted to build the car that Pontiac should have built but never would.

Outside his world of meetings, company politics and red tape, Adams built the Vivant in his personal Michigan studio. The project began with a 1:12 scale wooden model that he carved by hand. ‘I never enjoyed sketching and for me it didn’t make much sense to work out a design on a flat surface,’ Adams tells me.

‘I’ve always preferred to work in 3D and that’s where the wood carving came in. Back then we had no computers to model on, so I whittled wood by hand, eye, and feel.’ The completed Vivant model included nose features referencing Pontiac, while its tail was influenced by Bertone’s Scaglione-designed Alfa Romeo BAT concept cars.

Adams could easily have started with a production chassis but this would not have fulfilled his ‘without compromise’ mission. So the project began with Adams designing and fabricating a bespoke multi-tube spaceframe chassis, which he numbered 63-0001 (the first two numbers indicating the build year and the last four indicating that this was the first of a possible series). Its layout was advanced for 1963, with fourlink torsion-bar suspension at the front, and the rear having a custom-designed three-link arrangement with coil springs and progressive dampers. Once it was rolling, Adams was ready to dig in.

One of the unique aspects of the Vivant project was that Adams built it while working at Pontiac. As such, he had full knowledge of (and access to) the division’s finest performance components. So when the time came to choose an engine, Adams did what no one else could, and strolled out of his office into Pontiac’s Experimental Division. There he was able to buy (for $75!) a special horsepower development engine that had been built by NASCAR legend Ray Nichols.

Adams had a stroke of luck when he mentioned the project to local workshop owner Jack Henser. Adams recalls: ‘When I showed Henser the car he got really excited. He’d just hired a crew of aluminium panelformers, recent immigrants from England. After I hired his team I used the 1:12 scale model to create buck stations. Then for months I’d stop by the shop and watch the body take shape. What I was going for with the Vivant was purity of form. It was a design totally devoid of exterior trim and garnishments. It didn’t need any of that. Two razor-sharp edges originated at the nose and ran the length of the car, joining each other in the rear. The entire mass was unbroken with the only external elements being the wheels, windshield and side-exit pipes. I was young at the time, but this has to be my purest design.’

By 1965 the two-year build of the Vivant was complete – the car was a fully functioning, running, driving automobile. That year Adams showed the car at the Detroit Autorama, then kept it as his personal transport for 12 years before trading it to fund the construction of a race transporter. From there the Vivant simply went missing.

In 2009 the car suddenly resurfaced in a blog on the internet. A friend sent me a link, and when I viewed the images there was a surprising personal connection. My uncle used to bring me pictures of unusual cars when I was a kid. I would pin them up on a corkboard in my bedroom – my make-believe car collection. The corkboard and photos are long gone, but the memory of them remains. And I instantly recognised these blog photos as one of ‘my cars’.

And so began the chase. First, I had to track down the person who posted the photos. When I finally found him I was disappointed. No, the car was not his; but he knew a guy who knew a guy, and on it went. It took nearly a month to get the owner on the phone and, to my surprise, there were three. And they were all called Bob! The courtship was long, with dozens of telephone calls, never really knowing which Bob I’d reached. After more than two years of discussions with the Bob trio, somehow I finally got a ‘yes’. The car was being stored in Ohio and I feared the sellers might change their mind, so I immediately wired a large sum of money to trusted car buddy Myron Vernis. Within 24 hours Vernis had the car on his trailer. Deal done.

When the car arrived at my workshop it was complete with the original engine, chassis and aluminium body. The windshield uprights were there but the original glass was gone. Much of the Nassau Blue exterior paint had been removed and the interior was in poor and incomplete condition. None of that bothered me, because I had the car of my childhood dreams – Herb Adams’ ultimate expression.

Straight away I got in touch with Adams, and from there a friendship began. I shared with him my plan to show the car at Pebble Beach and he was enthusiastic, becoming intimately involved in the car’s restoration from start to finish, and providing key details along the way. With that debut as our goal, the car was shipped to Jake Yenny of Loveland, Colorado, in 2014. After 4000 hours and more currency than I ever dare tell my wife, the car rolled out of Yenny’s shop and onto the lawns of Pebble Beach.

The crisp morning air at Pebble Beach is invigorating as I drive onto the showfield. The finished Vivant is everything I had ever dreamed about in a sports car: elegant, beautiful and powerful. Adams himself is swarmed by admirers and the car seems to be appreciated by enthusiasts from all corners of the hobby. By the end of the day, the Vivant has crossed the awards ramp to collect a First in Class Trophy.

Several European friends have suggested that I show the car at Concorso d’Eleganza Villa d’Este on the shores of Lake Como. They believe it could be one of those rare American designs that Europeans can’t resist. Perhaps that trip will be my next goal. Meanwhile, I’m going to enjoy driving it. Vivant means ‘alive’. Once again, and at last, it most certainly is.