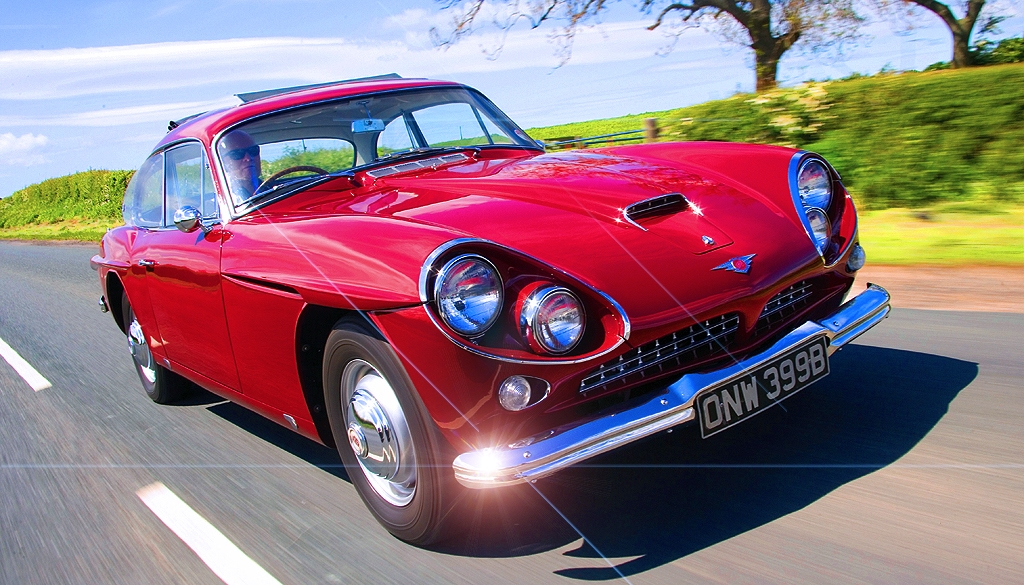 At a glance Jensen C-V8: Exceptional performance; 120mph from rest in under half a minute; very smooth engine and transmission, but creeps when idling; moderately heavy but responsive controls; firm, comfortable suspension; unusually complete specification.

Big though its 5-9-litre engine may have seemed, and fast as it was when tested barely two years ago, the previous Jensen C-V8 is left somewhat in the shade by the latest model. It remains one of the world’s fastest cars — scarcely any other four-seater can equal it on straight-line acceleration — yet none of the refinement, precision of control and docility of the less powerful model has been lost.

Changes in the superb Chrysler vee-8 engine are few. The bore diameter is increased by 3mm to 108mm, and the compression ratio has been stepped up from 9 to 10 to 1. The increase of capacity from 5,916 to 6,276 c.c. is only 6 per cent, but as the car’s weight is unchanged all the extra 30lb ft torque (bringing this to 425lb ft) is available (for added acceleration. As compared with the earlier car’s impressive surge to 100mph in just 22.4sec, the new one reaches 110mph in the same time. Indeed, it can accelerate from a stand-still to two-miles-a-minute within 30sec. The standing-start quarter-mile in 14.6sec is the quickest we have yet med for any four-seater, and the speed at the end of the quarter was over 90mph. 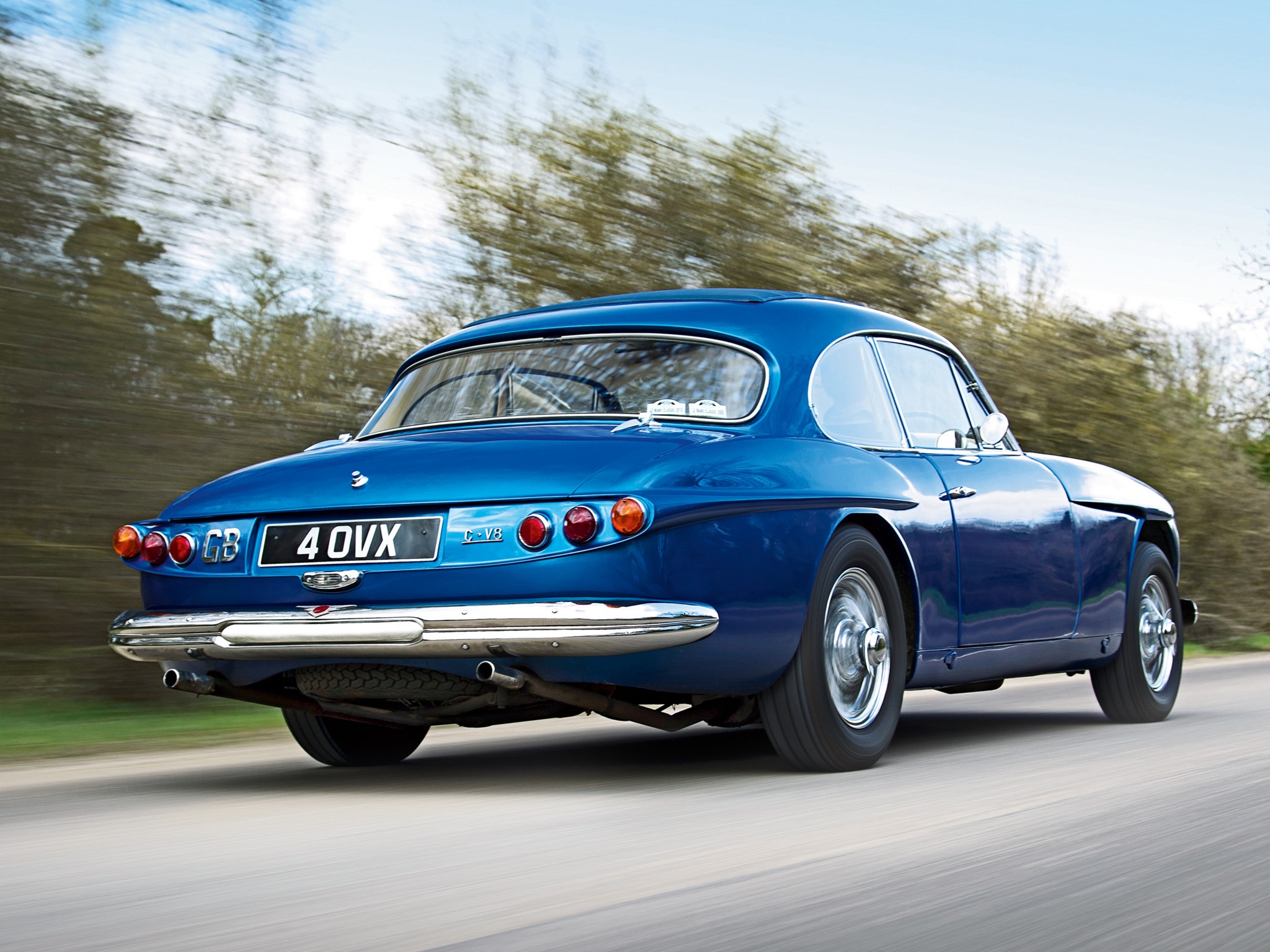 Just as impressive as the sheer performance is the sensitive response to the throttle, and in stop-go city driving the car trickles along on the Carter carburettor’s primary chokes with supreme tractability. The power unit is as smooth as one would wish and is quiet all through its range, to its maximum of just over 5,000rpm.

Starting, both hot and cold, is a little temperamental, often calling for a second try with the rather noisy starter — a point commented on in the previous test. Once running, however, the engine is ready to give full power almost straight away.

Chrysler Torqueflite automatic transmission is standard and suits the Jensen very well. Some whine is heard in low, but the intermediate and top gears are virtually silent and changes, especially under full power, are exceptionally smooth. Very often with automatic transmission, one has to think for it and use the selector to override the automatic control. With the Jensen’s Torqueflite it really is sufficient just to leave Drive selected. Much of the time the driver will be unaware which ratio is in use, and the changes up or down are so unobtrusive as to pass unnoticed by passengers. Quite a lot of the overall smoothness of the transmission is owed to the even torque and good low-speed pulling of the big engine in top.

Below 32mph firm pressure on the accelerator brings an immediate change down to low, and to intermediate up to 67mph. The selector lever provides first and second gear holds. A button in the lever end is pressed in to change from D to 2, but it can then be moved without hindrance between 1 and 2. Using the “ holds,” intermediate can be taken up to 88mph — the 5,100rpm limit — and low to 52mph. A gear change produces a marked jolt only if one accelerates hard and then abruptly releases the throttle, as when a decision to overtake is frustrated in mid acceleration. 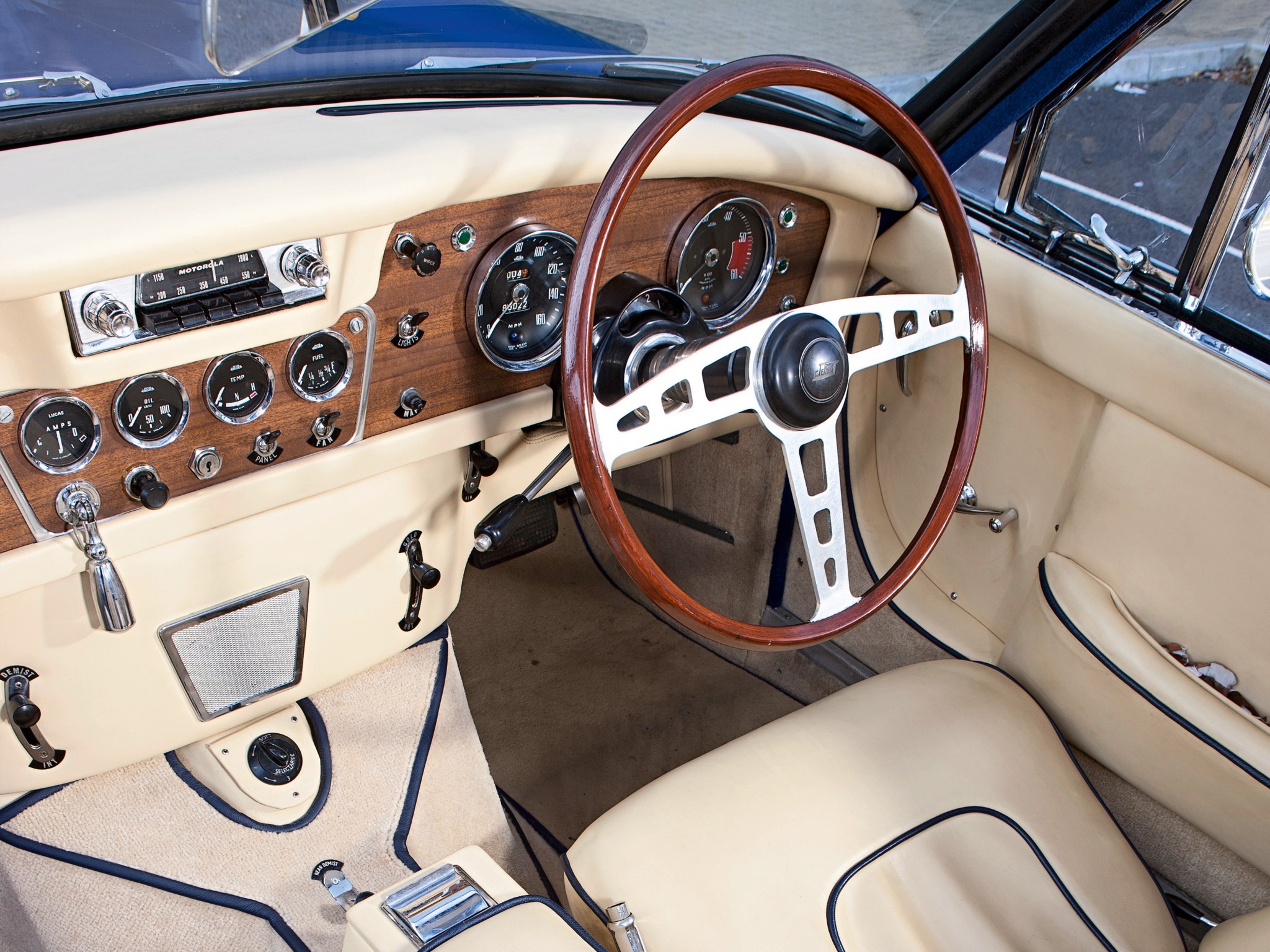 Some of our drivers commented on two characteristics which seemed at first to be transmission faults. The first was a tendency for the car to jerk when the selector was moved to Drive after starting from cold. This was reduced by waiting for a few seconds before moving off, to allow the initial fast idling speed to settle down. The second was the firm pressure on the brake pedal — as much as 50lb effort — needed to prevent the car from creeping forward at traffic halts unless the selector were moved to neutral. Adjustment of the slow running would have reduced this creep; a weakness in the brake servo of the test car was suspected as the cause of the heavy pedal load.

Although there has been no change in the size or operation of the Dunlop all-disc system, the brakes could not match the efficiency of those of the earlier car. They still coped with the speed potential well enough to give confidence when driving fast, but needed much higher pedal loads than before. The handbrake also proved inefficient, and as there is no parking lock in the transmission, a chock under the wheels would be required for parking on slopes of 1 in 4 or steeper. The handbrake lever is also badly sited. It is so near the driving seat that it can be grasped only with a hand cupped over the end of the lever, otherwise one’s fingers catch on the seat trim as the lever is pulled up.

Evidently there are still drivers so strongly against automatic transmission that they are prepared to pay more for the alternative clutch and 4-speed gearbox; this is now listed by Jensen at £100 extra including tax. After the main test was completed, another car with this gearbox was put through its paces, and representative figures are included in the data. After adjustment the clutch proved able to take the very high torque when the pedal was released abruptly at about 3,000rpm, and up to 44mph — the limit for bottom gear — this car was slightly quicker than the automatic model. The central change, however, objects to being hurried, and although it has a positive and reasonably rapid movement for normal use, yet, try as one might, it proved impossible to make the car keep pace with the automatic one through the gears. Each change seemed to lose a full second, so that the manual model was three seconds slower to 120mph; but it did have the edge on the automatic for maximum speed. The gear ratios are well-spaced, and 97mph can be reached in third, yet the engine is so sweet that it will even pick up speed from 10mph (under 400rpm) in top gear.

Peak power of the new engine is attained at 4,600 instead of 4,800rpm, and both cars were found to be too far down the “wrong” side of the power curve at maximum speed for there to be any risk of exceeding the recommended rev. limit. The manual car reached a mean top speed of 136mph — 7mph higher than the automatic. Much better brakes on the second car, incidentally, confirmed that those on the automatic were below par.

A limited-slip differential allows full throttle take-offs from rest with- since they generate loud wind shriek at speed; in contrast, the lack of obtrusive wind noise is exceptional when they are closed. The Jensen CV8 holds 110mph with complete ease and in deceptively restful silence; even at 120mph voices have to be raised only a little for easy conversation. This speed can be maintained without going beyond the first pressure (primary carburettor throttles only) on the accelerator.

Rather heavy controls make the Jensen CV8 very much a “man’s car”. Unusual tractability and mechanical refinement give it a Jekyll and Hyde character, so that one can appreciate it as much when in an idle mood (or hemmed in and frustrated by lesser vehicles), as when out to take every-thing it can give. But most of one’s motoring lies between these extremes, and for this the Jensen’s relaxed, easy stride, its comfort and stability mean high average speeds over long journeys in return for little hard work or fatigue.

Chrysler Torqueflite automatic gearbox, but a four-speed all synchromesh gearbox with central change is available for £100 extra.

Weather – Dry with 20-40mph wind surfaces for both