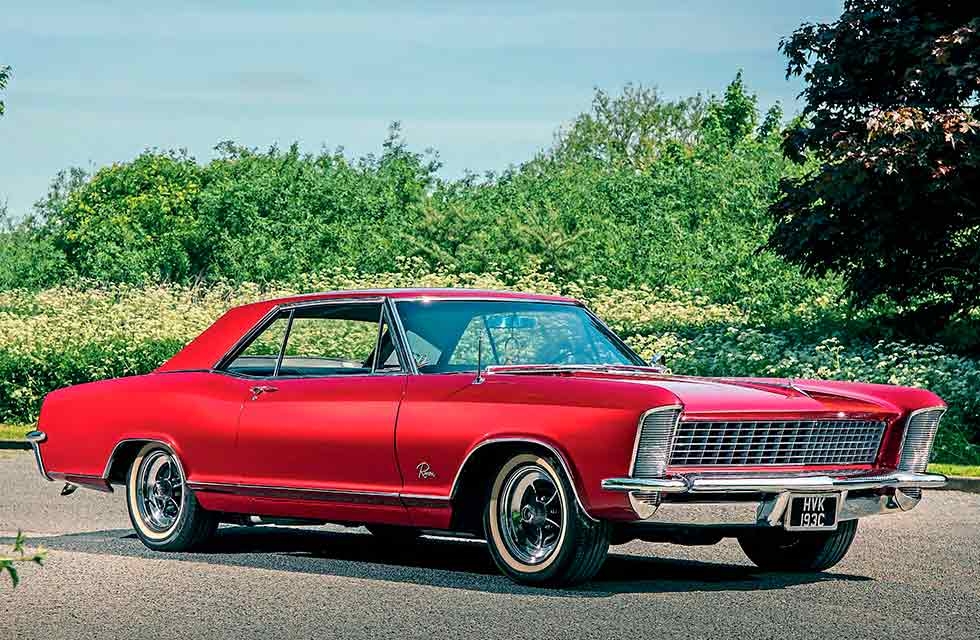 Most problems have more than one solution. For General Motors, the problem of what to do about the emerging personal luxury market was solved differently by each division. When we checked out the Pontiac Grand Prix on Drive-My, we saw how detail changes and better equipment gave an existing model a special identity. But there was another way, and it began with a clean sheet of paper.

General Motors dealers had been pleading for a car to match the fashionable Thunderbird since 1958. By the end of the 1960 model year, the T-bird was shifting almost 93,000 units annually, in response to which General Motors could offer… nothing at all. In mid-1959 General Motors’ vice-president in charge of styling, Bill Mitchell, gave the job of creating a Thunderbird rival to Ned Nickles in the Special Projects studio. Mitchell liked the results, though tweaked the roof to copy a pre-war British vogue for imitating taut hood fabric, but in metal, and by the spring of 1960 they had a full-size clay model.

You probably know the story of Mitchell suggesting the car should be a cross between a Ferrari and a Rolls-Royce. Depending which source you trust, this was either an instruction to Nickles, or a piece of advice in a note to Buick general manager Ed Rollert. It’s a memorable idea and one that’s probably responsible for the Riviera becoming a genuine performance car and not just a boulevard cruiser, but it’s not as interesting as the corporate squabble which followed.

Mitchell went door-to-door, trying to interest Cadillac and Chevrolet (and according to some sources, Pontiac) in the new car, then codenamed XP-715. All said no. Oldsmobile liked it but wanted to change it. Buick liked it as it was. Job done? Not quite. GM’s executive committee got involved and gave the divisions 60 days to come up with a highly detailed pitch to explain why it should be theirs. Ed Rollert brought in the division’s new ad agency to help with the pitch and it paid off − Buick won.

But then the committee announced it wanted to see another presentation in a further three weeks. Buick won again and in April 1961 their proposal was approved.

Rollert had ambitious plans to turn the Riviera from a clay model into a production car in time for the ’1963 model year. In effect, that gave Buick’s chief engineer Lowell Kintigh about 16 months. Somehow, he and his team did it. They chopped Buick’s standard chassis to fit the Riviera’s 117- inch wheelbase and borrowed quite a bit of hardware (including the dashboard) from the Electra 225. The driveline was nothing new either; a 401cu in ‘Nailhead’ V8 with the now-ancient Twin Turbine transmission.

Not so impossible dream

The car in our pictures is Bob Fardell’s 1965 model. It’s been something of a dream car for Bob for many years, and finding it was the fulfilment of a long ambition. Not that he managed it in a conventional manner, as he explains: “Back in 2013 I found the car on an obscure website linked to Craigslist, advertising property and farms. The Buick was part of an estate for sale in Oklahoma, and I watched with interest to see how the auction went. After the sale I managed to contact the buyer. This was Joe Armstrong of Howes Cave, New York.”

Bob’s luck was clearly in, as Mr Armstrong was very helpful. His only interest was in the land and everything else in the estate was for sale, including the Buick. After an hour’s conversation, the deal was done. “The most important thing to me was knowing that the car was complete,” says Bob, “as I know some parts are hard if not impossible to find. Joe had gone over the car with me in detail and that’s why I bought it unseen. I sent him a payment, and that was it. I owned my dream car − a 1965 Riviera.”

Bob contacted an American firm to arrange the pick-up and shipping, and the car arrived in Southampton 10 weeks later, early June 2013. But had his luck held?

“I had the car collected on a transporter,” he says, “but when it arrived home in Essex I couldn’t believe the condition, it was on the key and I could have driven it home from the port!” While the car needed work to be cosmetically and mechanically perfect, there was nothing to stop Bob from enjoying a couple of months of use. It was summer, after all. In the end though, some mechanical niggles kicked off what was to be a major project.

“A compression test confirmed a problem with the engine,” says Bob, “and after a strip-down, I decided to get a reworked set of heads from TA Performance in Scottsdale, Arizona (www. taperformance.com). I also got a new cam, timing gear and chain from them. My friends Russ and Stuart at Customville American in Dagenham (www.customville-american.co.uk) found me a replica exhaust system and my mates Pete and John at GS Autos helped with the rebuild.” It went well, inspiring further work.

“I continued with new shocks to all corners, a propshaft rebuild, an overhaul of the gearbox and, of course, new brakes,” says Bob. “A fair bit of time was spent on getting the switch-pitch working correctly, but it was all worth it.” Ah yes, the Super Turbine transmission. This replaced the ancient Twin Turbine for 1964 and concealed a torque converter with a variablepitch stator. Imagine that the stator is the bit between the impeller (taking drive from the engine) and the turbine (sending drive out to the gearbox). It controls how oil flows from one to the other, and thus how much torque is transferred. In Bob’s Riviera, the pitch of the blades on the stator changes depending on throttle input to give more torque multiplication when the engine’s working hard.

“During the time we spent working on the mechanical side, I was gradually stripping the body down to bare metal,” recalls Bob. “Each time I stripped a panel I was convinced I was going to find some pudding or newspaper stuffed in a seal, but there was nothing… none of us could believe how solid the old girl was. Apart from renewing the lead work and a couple of small marks on the wings, she was mint.” For the task of prepping and refinishing that large body, Bob turned to Ray Stevens of Stevens & Gill in Barking (020 8594 0357).

“The colour I went for is Blaze Red Crystal, a Chrysler colour and a modern version of the original factory Claret Mist,” Bob says. “Ray told me that perfection takes time, and perfection is what he’s provided. Now, I can just about get her out the garage without someone stopping me to ask what she is and what the colour is!” During the paint process Bob sent away the bumpers and door mirror for a re-chrome while he spent hours polishing the rest of the stainless and chrome parts himself.

“The interior was in good enough nick to leave alone, so I just replaced the veneer trim and installed new carpet and cleaned everything else. A good clean-up of the wheels and some new boots from North Hants Tyres completed the work in time for the Damn Yankees’ North Weald meeting, July 24, 2016. I owe a lot of thanks to the people I’ve mentioned above, and I’m especially grateful to my wife Ann for letting me spend so much time down the garage!”

During the restoration, Bob managed to research some of the car’s history via a dealership in New York with records going back to the Thirties. The Riviera was bought new by a lady in New Hampshire, who later moved to Oklahoma and owned the car up to her death in 1997. From that point the Buick sat in a barn until the estate sale in 2013. So it was effectively a one-owner car before Bob’s tenure. It’s one of just 48 Rivieras built in 1965 as a special order with no air conditioning. Yes, the Riviera was a very well-equipped car, but when you start looking at the list of standard kit you find an awful lot that seems to match the Pontiac Grand Prix we discussed on Drive-My.

Power-steering and -brakes, two-speed wipers, electric clock, console-mounted gear selector, walnut-effect veneer, foam-cushioned bucket seats… just what did you get for your $4318 base price, as plays $3426 for a ’1965 Grand Prix? Well, you could mention a standard automatic transmission in the Riviera, but the main difference was the exclusivity of a body unique to the model. And that, plus the extra power and poise, was probably worth it.

Each manufacturer had to cut their cloth to suit their purse, so while Pontiac did a great job creating something fresh from an existing model, Buick had the chance to create a whole new car. Both models did essentially the same job and did it very well, creating long-lived dynasties − the Riviera made it to 1999 and the Grand Prix to 2008. But nothing’s going to match those first examples of the breed, is it? To look at Bob Fardell’s muscular yet elegant Riviera is to be grateful that GM took personal luxury so seriously − even if they never did defeat the Thunderbird.

’1965 was the last year for this shape in the three-yearstyling cycle. The ’1966 would be all new. Real wood veneer trim appears to be in good condition; often these suffer with age, particularly in the damp. 2+2 seating emphasised the ‘personal’ element of the concept. Riviera shares digs with a Harley and a Camaro. 401cu in ‘Nailhead’ V8 rated at 325bhp. Clam-shell headlamps are… Owner Bob Fardell. … operated by electric motors. Hidden headlamps give the Riviera a menacing appearance. Riviera body was unique andnot shared with any other GM product.

“IT’S BEEN SOMETHING OF A DREAM CAR FOR BOB FOR MANY YEARS, AND FINDING IT WAS THE FULFILMENT OF A LONG AMBITION…”