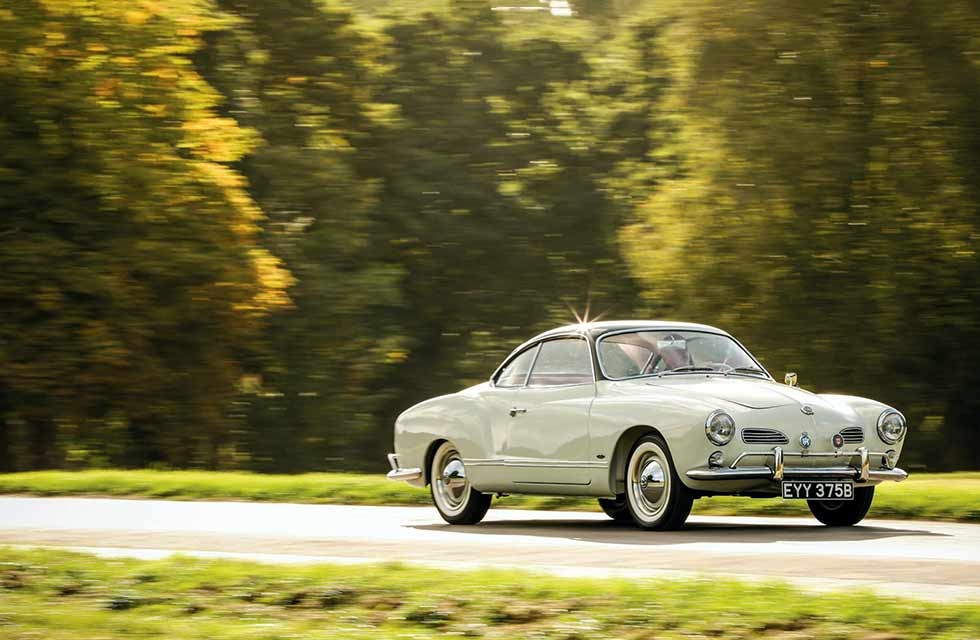 There was a plethora of shiny, rare and valuable coachbuilt classics at last summer’s Concours of Elegance at Hampton Court Palace, yet one of the standout cars of the parallel Royal Automobile Club ‘Club Trophy’ was effectively an early ’60s Volkswagen Beetle. Admittedly one with a curvaceous and crafted body, but it was relatively modest given the company in which it found itself. It says a lot about this particular car that it claimed another award to add to the gong from the Club’s Woodcote House event earlier in the year. And rightly so: the left-hand-drive 1964 Volkswagen Karmann Ghia is as cute as a button and the pride and joy of owner and restorer Lori Clarke and his wife, Skye.

“She was hugely supportive throughout the four-year restoration,” Clarke recalls. “Skye really loves going out in it now that it’s done.” Despite not being directly involved in the rebuild itself, she thoroughly embraced the project – so much so that she ended up christening the German classic ‘Carmen’ on behalf of the family. That was one of the driving forces behind the purchase, because the couple wanted a classic car that could accommodate Izzy and Henry, their two then-young children.

Henry was 10 years old when Clarke won the Volkswagen on eBay – “I was the only bidder” – and he accompanied his dad to Wales for the drive home to Surrey in the £6000 prize. “He soon wished he hadn’t,” says Clarke. “It broke down four times and it took six hours. It was a running car but it was obvious it needed more love and attention.” It was imported in 1974 from the United States and had swiftly made its way through eight owners since.

Another part of the appeal was that VW’s ‘People’s Car’ had played a major role in Clarke’s early motoring life. At the age of 16 he restored a Beetle: “That was perfect to learn the basics with and it fired my enthusiasm. It effectively gave me a career of sorts after school. I was living at home in Eastbourne working for a company called Concours Classic Cars, restoring all manner of things from Moggy Minors to Jaguar E-types. The company went under in 1989 when the classic-car bubble burst, but I found work with a one-man band [Windmill Classics] and then a Jaguar expert. Much as I enjoyed the work I couldn’t see it as a long-term career.”

Instead, Clarke trained as a chartered surveyor and today oversees three practices. He didn’t turn his back totally on old cars, owning a Hillman Imp and a Mercedes-Benz 500SL before the arrival of ‘Carmen’. He recalls: “I tinkered with those but this was my first restoration after leaving the business. It was great to set up a workshop in my own garage and not have the pressure of meeting a client’s deadline.”

Unlike during his professional days of the late ’80s, the advent of the internet and the subsequent access to owners’ forums made the process far easier and more enjoyable. “I came unstuck a number of times but within minutes I was steered back on course,” Clarke says. “People were really helpful, often directing me to rare parts suppliers all around the world.”

Clarke overhauled every moving part on the car, his proudest claim being the rebuilding and detailing of the flat-four. The standard 1200cc engine produced a meagre 40bhp with a single carburettor, so he decided to take it out to 1385cc by employing new barrels and pistons, fitting a high-lift cam and adding a pair of Weber carbs. This also meant using early Mann filters, complete with Clarke’s recreation of the original orange sticker. Apart from simply looking the part, the resulting engine’s power output was also increased to 60bhp.

Once stripped, the shell was media-blasted and etch-primed. Although not a horror story, the front valance and the bottom of the wings and doors needed either attention or replacing. Pattern parts – made in Denmark, surprisingly – and salvaged secondhand bits were sourced through Volkswagen Heritage. The welding, preparation and painting was undertaken by Auto Attractions in Dorking, and the distinctive colour scheme really sets the car off.

That and the thin Vredestein Classic whitewall radial tyres, Clarke’s grandfather’s RAC badges and US-spec stainless-steel bumpers. The bulk of the car is finished in Pearl White, though it looks more like a dirty cream or very pale khaki, topped off perfectly with a black roof.

‘Completing this super stylish package is the Brick Red and Ivory interior, which makes it look ridiculously chic’

Completing this super-stylish package is the Brick Red and Ivory interior, which, combined with the thick-knot carpeting, looks ridiculously chic for what was a relatively inexpensive car. The door cards and upholstery sets were imported from TMI Volkswagen Parts in California. “I managed to get everything I needed,” Clarke explains, “though some of it was expensive.” With bits coming from all around the world, this was a truly global rebuild.

Just how attractive this Karmann Ghia is hasn’t been lost on Clarke’s now-teenage children: “I was taking Henry somewhere in it and we passed Guildford High girls’ school as they were chucking out. They all looked and cooed as we drove by. He turned and said to me, ‘Dad, when you die, can I have your car?’ I guess that’s the power of a classic!”

Wilhelm Karmann had been making car bodies since 1902, but he and his company became known outside of Germany only after WW2 and his involvement with Volkswagen. Prior to hostilities it had provided bodies for Adler, but the company never resumed production postwar.

Having invested heavily in tooling for Mass-production, Karmann had to find another paymaster for his workforce, and creating four-seater convertible versions of the newly launched Beetle appeared to be a natural fit.

It still looked like a Beetle, though, which meant Wilhelm’s well-equipped factory in Osnabrück was being underused, hence the notion to build something fresh around familiar mechanicals. Independent Italian styling house Ghia came up with the solution: a voluptuous 2+2 coupé body. Its silhouette was 7in lower than the standard Beetle’s 5ft height, but being longer and slightly wider it came in at 224lb heavier, thus nullifying the aerodynamic advantages and tempering any potential leaps in performance. Launched in 1955, and bar the addition of a front antiroll bar four years later, under the skin it was identical to its older, upright brother.

It was initially expensive, £1216 compared to £740 for a Deluxe saloon; it was also far from a sports car and less practical than a Beetle. Yet, though widely derided (even at home it was referred to as a Sekretürin-Auto – secretary’s car), the Karmann Ghia sold well. It helped that it was the first of what could be referred to as a ‘boulevard cruiser’ with sports car pretensions; it wasn’t a dowdy postwar saloon, but it was more practical than a true performance ragtop.

The Type 1 Karmann Ghia coupé was supplemented two years later by a convertible version (below), though UK buyers would have to wait a further year to splash out £1395 – import duty elevated the price to match that of an Austin-Healey 3000. The two Karmann Ghia models evolved in parallel with the Beetle until 1974, to the tune of 364,401 coupés and 80,899 convertibles. Most were sold in Germany and America, hence imports such as Clarke’s being as common in the UK as original right-hand-drive versions – possibly more so. Apart from purer looks and aesthetics, the pre1959 cars are prized among collectors because the bodies were hand-finished to a much higher standard. The Karmann Ghia later inherited bigger rear lights, heavier bumpers and plastic-infested interiors.