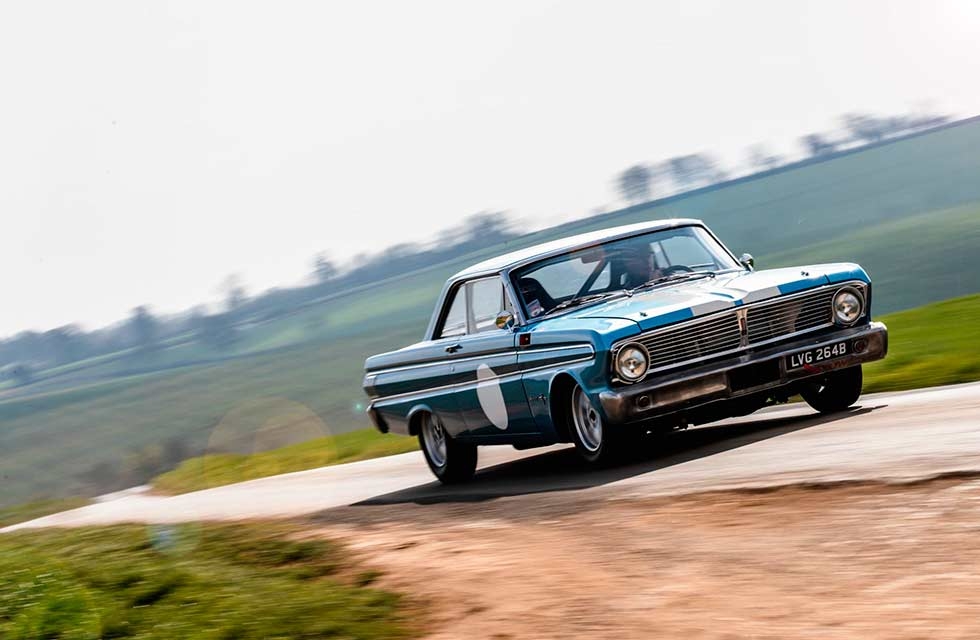 This ’1964-model Falcon was originally built in November 1963, then built into a racer in 2008, having been imported from California in 1998 as a rust-free car. Originally powered by a 260ci (4.2-litre) V8 with Fordomatic two-speed auto, it now packs a full-house Steve Warrior 289ci (4.7-litre) backed up by a Borg-Warner T10 four-speed. Porsche 911 guru Josh Sadler acquired it in 2013, and has enjoyed it since, but following an engine refresh it’s raced only once – at the 2017 Goodwood Members’ Meeting.

It’s very straight and tidy, especially for a racer, with no evidence of shunts, good floors and sills, and well-defined spot welds. The paint, a Citroën blue, is all good, save for a couple of cracks on one of the glassfibre front wings. The bonnet and bootlid are also plastic and the windows polycarbonate, all in the name of weight-saving, but the doors are steel, frames drilled for lightness, and retain winding windows and locks. The bumpers are aluminium and the wheels unkerbed with well-treaded Blockley road tyres (there’s a spare set with Dunlop Racers).

The motor is clean and tidy, with ceramic-coated exhaust manifolds which are a tight fit. Oil is still clean, and there’s an MSD rev limiter set at 7000rpm. Power output when last dynoed was 400bhp. Inside, there are two seats, though they, the belts and extinguishers are out of date for racing. The instruments have been disconnected, usurped by a matching set of Auto-meter gauges, the rev counter neatly set into the glovebox lid and angled towards the driver. Suspension modifications are as allowed under FIA regs – limited to a larger anti-roll bar and a bit of negative camber up front.

It starts instantly on the button (there’s no key) and, having to comply with a 105db limit for race tracks, is fairly subdued, though there are two alternative exhausts – a quiet 98db system, plus a set of open side pipes (‘for Goodwood’), all in stainless.

It’s unintimidating to operate, though the LSD is a bit fierce when turning sharp corners, and inevitably as a stiffly-sprung racer it gives your internals a shake-up on bumpy roads. The pedals are ideally placed for heel-and-toeing, as you’d expect. It’s tractable, happily pulling uphill in top from 2500rpm, and quick too, with an extra surge at 5000rpm giving a real kick in the back as the rears scrabble for traction. On the road it doesn’t get above 170°F even with blanking plates, at which oil pressure is 50psi at 3000rpm. The (unservoed) brakes, with four-piston calipers up front are smooth and pull up well with a bit of a shove. The steering, with a little play at rest is communicative; on road tyres it doesn’t tramline or follow road contours. It’s practical too, with a heated windscreen and illuminated instruments, so it could go straight out on the Spa Six Hours with a larger fuel tank. This is a serious, fully sorted car with few needs, and had an MoT until last year. Its HTP papers (class CT10) run to the end of 2026.

Ready and certified for a new owner to take it classic racing. The 289ci V8 put out a comfortable 400bhp when last on the dyno. Race mods include roll cage and a set of uprated gauges.