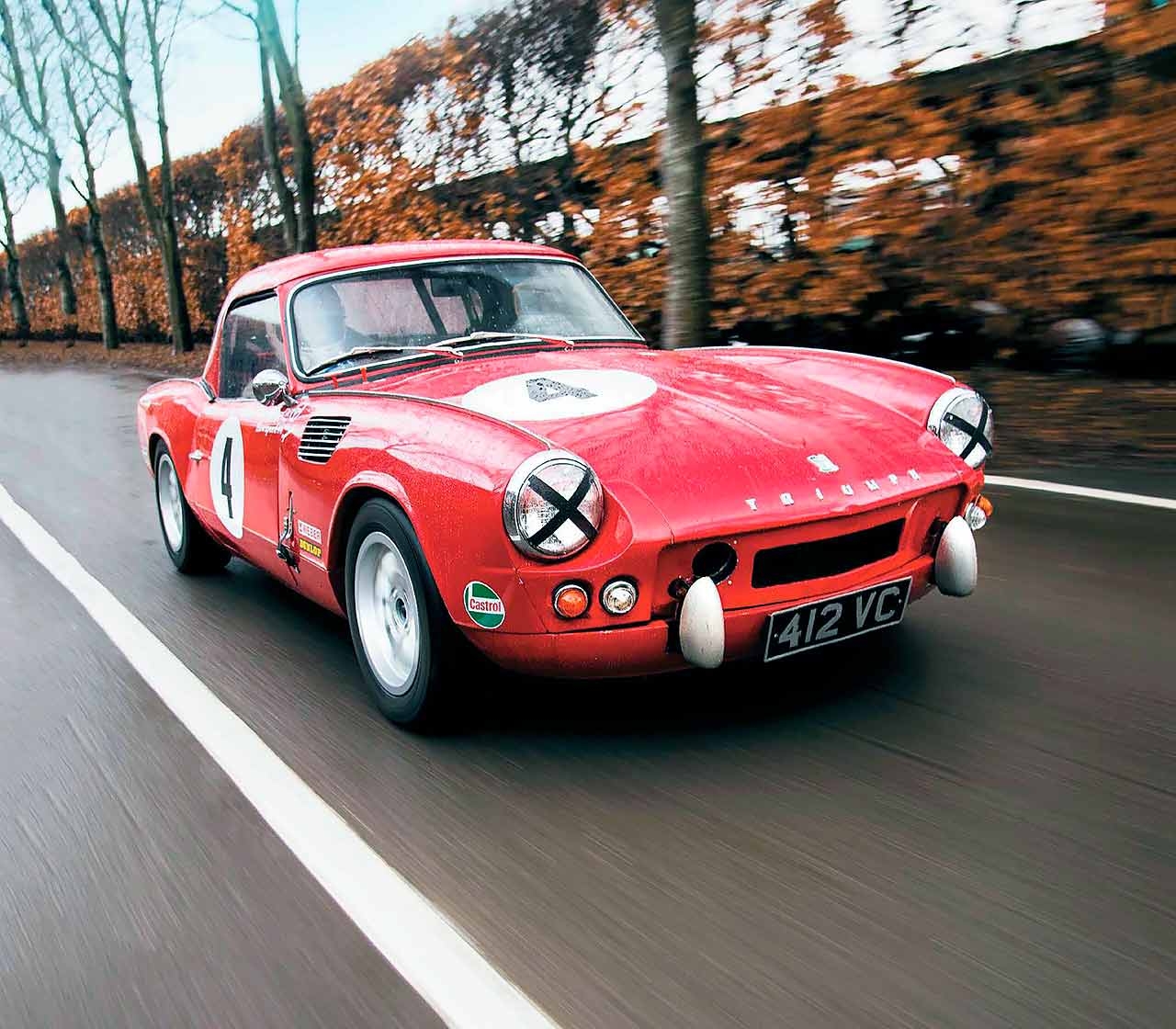 The little red sports car – it’s an automotive archetype. And even though we should know better, it makes us want to do rakish and impetuous things – like whistling while walking with our hands in our pockets, driving to the seaside without a scarf or going round a roundabout twice. When the Triumph Spitfire hit the showrooms in 1962 it must have stirred even wilder fantasies in the men and boys looking in through the glass. After the stubby Sprite and Midget its lines were more beguiling, more feminine, as noted by Ronald Barker in Autocar on testing the first example.

Talking of first examples, this car is one of two pre-production prototypes hand-built by Triumph. It was the car used for all the press and advertising photography both on this side of the Atlantic and, in left hand-drive form, in the US. Later, in more purposeful, stripped-down guise and with a hardtop, it became one of Triumph’s first competition Spitfires. Hence its appearance today.

But even in track-prepared trim the original lines are very much in evidence. And though Triumph connoisseurs might grit their teeth, I have to say that a Spitfire – even a fierce Spitfire – possesses qualities of almost unfeasible cuteness. The way the rear wings flick up to those dainty indicators, that waistline crease behind the front door to the rear haunch, the slightly pouting mouth and yet more scoops and curves in the front wings. It’s nowhere near as voluptuous or musclebound as, say, a Cobra 427. It’s more restrained and, well, pretty.

Some OSCAs have the same quality, but since the Italian cars’ racing careers are more visible they have perhaps made people more conscious of their underlying potency rather than first thinking, ‘I wonder if Marc Bolan had one?’

It’s no help that my strongest recollections of the Spitfire are from the model’s later days, when we were tired of BL’s shortcomings in fit, finish and performance. The Spitfire of my late teens was a bit naff, a bit weedy. Too many people called Barry in bobble-hats drove them.

But this Spitfire remedies all that at a stroke – or rather four strokes as the suck-squeeze-bang-blow sequence fires loud, sharp and, at first, pretty uneven. The car known as 412 VC hasn’t been out for a while and is spitting and complaining that it needs a good fettling. But it’s also how I’ve always wanted small, curvy sports cars to sound – potent, cross and gritty.

This car has a racing Salisbury limited-slip differential and in its current cranky mood I fear that the 1147cc four-pot might not make enough low-down punch to get itself going – yet it pushes off fine, growling to a trot with a bit of dipped clutch and prodded throttle to clear its throat.

What amazes me more is the fact that I fit inside it. The Spitfire’s cabin is little, especially with a hard-top fitted. Whereas the Fiat 500 and the Mini are compact in a space-maximising way, the Spit is just plain little – and low. So you stick one leg in, then bend sideways, then, er..?

Any comforts that elevated the Spitfire above the Spridget are gone in this race-prepped roadster. My heels skid about on the metal floor, my feet are funnelled by the narrowing footwell and I quickly realise my arm movements are going to be heavily attenuated by the cabin space. Whatever the back or front wheels might do on the limit, there’s going to be no hauling of the wheel back and forth to bring the little sports car back on line.

But on the move I quickly learn that the Spitfire responds quickly to small gestures from the wrists. There isn’t the rapiersharp responsiveness of a Lotus and perhaps you feel a twinge more movement in the muscles across your chest, but the steering is delightfully crisp. Maybe it’s a placebo – I’d looked at the car’s low stance and wide, rather un-Sixties-like tyres and just decided it would stay glued to the road. If I’m honest I’ve always preferred slightly hunkered-down resto-mod versions of the Spitfire and GT6. I love their posture, the wider track and tyres, a little negative camber and, in some cases, slightly flared wheelarches. This car has all that too, and does it with authenticity.

After its photo-call days were over the Triumph men, including Peter Clarke from the Competition Department, brought 412 VC back into the workshop to receive alloy body panels and other modifications in preparation for a spot of rallying. In 1964 Roy Fidler drove it to second overall in the Welsh International Rally. As I’m negotiating small roundabouts with a recalcitrant motor, braking while kicking the accelerator with the side of my foot to keep it lit (at least the pedals are nicely spaced), I’m not exactly feeling the whole competition history vibe.

Then suddenly there’s a deeper cough and a choke, a momentary free-wheeling nothing – then, clear running. Given a hearty blip of throttle the engine flourishes with a snarl and engages forcefully with the drivetrain. The snout rises slightly under acceleration. Now I can really feel the car.

There’s a near-flat deportment when turning, a neutral constancy in its angle as you roll on the power. The ride is good and the pedals feel just right, the controls are light and precise, the clutch and gear change quick.

At tentative speeds I’m not feeling too many subtle nuances in the attitude of the car as I move on and off the throttle. I’m guiding it in and out of bends with the steering, not the gas. It’s quick and it feels planted, but round the corners I’m thinking those negative camber/larger tyreprint thoughts again.

Then another part of me remembers Road and Track’s in-period observations, ‘When pressing on at racing speeds, the high roll centre caused the back of the car to lift and the wheels began to tuck in, sending the rear skating sharply outwards.’

Now, that could dampen your ardour. But salvation has been built into this perennial development mule. In its shadowing of the competition Spitfires and its precursory adoption of many racing innovations, 412 VC was fitted over the years with every performance upgrade going. Most have been taken out, but when Triumph’s press officer and ex-rally driver Terry Hunter bought the car off the company in 1965 he took it back to Clarke for an upgrade. The Salisbury differential comes from his time.

After Hunter, and still in Clarke’s workshop, the car passed into the ownership of independent racer Richard Lloyd, who invested in some serious mod sports racer touches. These included double wishbone independent rear suspension – the same as the later competition Spitfires. Again through Clarke and the Competition Department, it also got one of the potent four-cylinder 70X engines developed for the Le Mans Spitfires.

Coming – now confidently – out of a corner a long, straight road stretches ahead. Double-declutching on up-changes for even smoother shifts and to hear the carburettors bark, the little car quickly gains pace. It seems to be pulling from lower down than you’d expect, as if the motor is bigger. It’s not of course, but the body is lighter. After a few years wearing plastic panels, Clarke and Lloyd put the car back to alloy-panelled spec in 1999.

The motor is singing and the Spitfire is really going some. We’re way beyond Barry and the bobble-hat men now.

As the gearstick snaps home into top and the tachometer needle begins another swing across its dial, a realisation dawns. The 70X was developed to give the fastback Le Mans Spitfires 130mph down the Mulsanne Straight. This car has a 70X so it should do 130mph too. It’s an exhilarating but sobering thought – dare I? Better not. I lift my right foot, there’s a sudden faltering, a snort in the 42 DCOE Webers, a shudder through the drive-train and the Spitfire begins a long troubled deceleration to a petulant plodding for home and a waiting trailer. But it’s been enough. Not enough maybe to realise the car’s abilities – you need a decent track for that – but enough to realise what the model can do.

This car has taught me something I never knew – that the Spitfire was a formidable competition car. One of the 1964 Le Mans cars finished 21st. At the Tour de France that same year they beat the home team’s Alpine-Renaults. In the 1965 Monte Carlo Rally they made a credible second in class and at Le Mans, even better than the previous year, coming home 13th and 14th. Drivers such as Lloyd and Peter Cox campaigned them for several years in British club racing. The Americans raced the hell out of them. Yet all this seems to have vanished from our perception of what the model can be. Okay, maybe I like my Spitfires a little spikier than standard, but I’m not sure I really need a resto-mod. The spirit was in the car all along.

‘I want to keep the car exactly as it is’

‘Mechanically, the car could do with a good fettling,’ admits Chris Howard, owner of 412 VC. But he’s adamant that any work done on the car should be kept in check. ‘I’m just the current custodian but I want to keep it exactly as it is and not have it titivated up. I want people to see it as I got it – in its 1968 rebuild form.’

Howard, who knew Terry Hunter and communicated with Peter Clarke many times about the car’s history and upkeep, is also eager that people should understand the marque’s legacy. ‘We have a lot to be proud of in our engineering heritage. I think Triumphs are the archetypal, quintessential British sports car.’

Howard plans to have the Triumph back out on track both for his own enjoyment and for the public to see.

He’s also restoring a Triumph Courier van – which will be painted in the Competition Department’s blue – to accompany 412 VC to events.