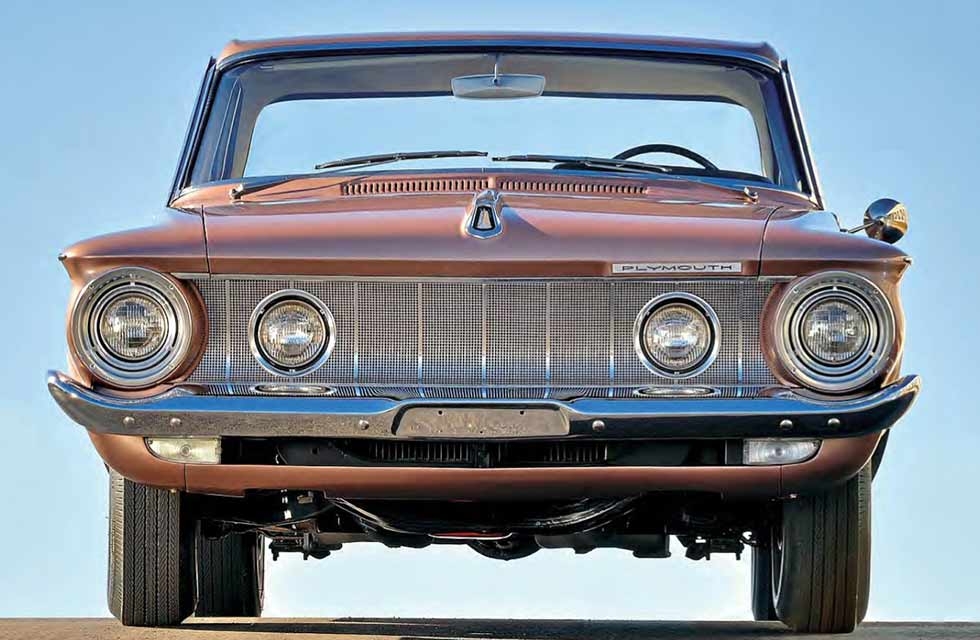 1962 Plymouth Savoy Beastly Mopar. A prelude to the American muscle car? Some would argue that this rare two-door, plain-Jane Plymouth sedan with a monstrous power plant was exactly that. Words & Photography: Jim James Maxwell.

The year 1962 was a pivotal one for the Chrysler Corporation as that was the year that Dodge and Plymouth B-Body (intermediate sized) cars became contenders as bona fide performance machines. Chrysler Corporation vehicles had a solid reputation at the time as being well-engineered, reliable cars. They featured torsion-bar front suspension with semi-elliptic leaf springs on the rear, and rugged drivetrains. However, the enthusiasts who sought high performance typically chose other makes − Chevrolet (409cu in), Pontiac (421cu in) and Ford (406cu in), to be specific.

The formula for creating a fast production passenger car revolved around a lightweight body and a high horsepower engine. Great news came from Chrysler for 1962, as the newly released B-Bodies were reduced in size and were lighter than previous models, and they now featured full unibody construction.

Starting in May of 1962, a newly designed ‘Maximum Performance’ 413cu in V8 power plant was released and made available to buyers, boosting the most power output ever offered by the automaker. (This article focuses on the Plymouth Savoy, while the Dart 330 was the Dodge equivalent.)

Automotive historians have described the 1962 B-Body cars as oddly shaped and clumsy looking… ugly even. There’s a story behind the unusual styling of these cars, and the reason for the proportions of the body shapes. The way the story goes, during the timeframe that Virgil Exner (who was the vice-president of design at Chrysler) was finalising the new line of 1962 cars, which were to be large, full-sized vehicles, there was a sudden and totally unexpected new order from the front office.

The order for change came from William C Newberg, who was the new president of Chrysler. Legend has it that, while at a cocktail garden party which GM boss Ed Cole was also attending, Newberg overheard something that he felt was of upmost importance. He heard that Chevrolet was downsizing, as a result of Cole saying to someone else that the new Chevy for 1962 was going to be on a shorter wheelbase and smaller overall. In panic and with immediate reaction, Newberg decreed to Exner that the upcoming new models needed to be made smaller, to keep up with Chevrolet. Exner fought it, but had to have his team work 24-hour shifts and seven days a week to get the new, downsized cars ready for production on time.

Once the line of 1962 Chevrolets was released, it was then learned that during the day of the garden party Ed Cole was actually talking about the new Chevy II model and not the full-sized Chevy cars, which continued as large cars. Even though the downsized B-Bodies did not sell well, the fact that they were lighter than the competition meant these ‘ugly ducklings’ were well-received by drag racers and street performance enthusiasts alike. While the general public did not embrace the styling, in the big picture these cars did a lot to change the overall image of the company, all because of the ‘Max Wedge’ engine and its impressive performance.

This high-performance version of the 413 engine for 1962 came as a result of a conversation between the new Chrysler Corporation president, Lynn Townsend, and his teenaged boys, who were very tuned-in to the scene on Detroit’s Woodward Avenue. When quizzed, the boys had told their father that Dodges and Plymouths were not part of the action; that they had no presence at all.

Townsend then called the engineering department. A man named Tom Hoover answered the phone, and after learning that there would be full support from the top (as well as a budget), work soon began on upgrading the existing 413cu in Chrysler engine (also used for truck and marine applications) for all-out drag-racing use. It was 1961, and by May of 1962 the Maximum Performance 413 was available in limited numbers.

To create this extreme 413 engine, the Chrysler engineers were led by Tom Hoover (who was a graduate of the Chrysler Institute, had a Master’s Degree in Physics and was a founding member of the late-Fifties Ramchargers Drag Race Club). Numerous internal changes were made to the Chrysler 413 engine (which was known as the RB (for Raised B-block engine − it had a taller block height as compared to the 361/383cu in ‘B’ engine). It was the largest cubic-inch displacement the corporation had at the time and was equipped with wedge-shaped combustion chambers.

The ingredients of the engine that Hoover and the staff put together was rather exotic. The basic block was from the truck division (stronger, with more nickel content) and it had a forged crankshaft with flame-hardened journals, along with tri-metal, hardened bearings, forged-steel I-beam connecting rods (Magna-fluxed), and fitted with 11.0:1 ratio extruded aluminium domed pistons and mechanical camshaft with .500-inch lift, 300 degrees of duration. A special baffled oil pan was used, unique to these Maximum Performance engines, as well as a high-volume oil pump.

There was special attention given to the design of streamlined exhaust manifolds, and they were upswept with large internal passages, exiting to three-inch diameter header pipes. Other details of these Max Wedge power plants include a double-breaker distributor, special low-power absorption water pump and deep-groove pulleys. These potent engines, when placed into the lightweight 1962 cars, were hard to beat on the drag strip, especially when racers were able to fine-tune them and add larger rear slick tyres for traction. Hot Rod Magazine’s Ray Brock ran a fantastic 12.37 elapsed time in a 1962 413 Plymouth, at a terminal speed of 114.79mph in the quarter-mile. A more seriously prepared drag car from Tom Grove, with his ’62 Plymouth ‘Melrose Missile’ 413 car, ran the first official sub-12-second run by a full-sized passenger car (equipped with a factory optional engine) when he stopped the clocks with a 11.93-second run at 118.57mph. Maximum Performance 413 cars were a force to be reckoned with on the street and the drag strip.

There were two transmissions available for 413 Maximum Performance buyers, the three-speed manual and the three-speed automatic. At the time, Chrysler did not have a four-speed gearbox on their option list, so a heavy-duty Borg-Warner T-85 three-speed (with 2.09:1 low gear, 1.44:1 second) manual had to suffice, incorporating an aluminium clutch housing with floor shift.

For 1962, the Torqueflite automatic transmission (called the A727, replacing the previous A488) had a design change, now including a one-piece aluminium case (which reduced weight by 601b) with upgrades which included high-friction-coefficient clutches and kick-down bands, revised servo return springs, plus the hydraulics were recalibrated for increased line pressure (resulting in higher shift points). Push-button gear shifting made for precise, quick manual shifting (gear ratios: 2.45:1 low, 1.45:1 second) and now the driver could have full manual control.

All Max Wedge cars came with heavy-duty drive shafts which were selected for minimum run-out and optimum balance; the rear end was the 8%-inch diameter pumpkin-type differential, Sure-Grip, with standard gearing of 3.91:1.(Seven other axle ratios were available for dealer installation, including dragstrip-only 4.89:1.) Heavy-duty six-leaf springs were fitted, as were heavy-duty shock absorbers. A pinion bumper was used, and recommended to be adjusted to contact the floor pan at ride height.

The Maximum Performance package could be ordered with any B-Body except for station wagons. For all-out track use only, a run of cars with 1 3.5:1 compression pistons came with a warning not to run at open throttle for more than 15 seconds at a time. These engines were rated at 420 horsepower at 5400rpm, and came at an additional cost of $67 over and above the $545 manual, $615 automatic, price of the Max Wedge package.

In all cases, the manual transmission cars were the rarest, as word had spread quickly that the automatic transmissions were actually quicker on the drag strip and also were considered bulletproof in strength. In addition, the use of an automatic transmission on the drag strip offered better run-to-run consistency in elapsed time. Our feature car is a factory 413 Maximum Performance Savoy model that came with the three-speed manual transmission; a rare car that somehow survived all the years and was found in 1985 inside a chicken coop in South Carolina (why is it always a chicken coop? – Ed.). Luckily, the vehicle did not suffer from rust/ corrosion issues that typified this era of Chrysler Corporation cars and was nearly all intact, save for a few small details.

It received a restoration in the Eighties and spent 20 years in an automotive museum. Galen Govier, who is considered an expert with these cars, has verified the VIN (the fourth digit ‘1’ confirms it as a factory 413 Max Wedge car) and this car has been added to the Chrysler Registry. In recent years the car was further refined in authenticity, going from about an 85% correct vehicle to where it is now, which is about as close to original May 1962 condition as is possible. Because it has few options (it wasn’t even equipped with a radio) this is one of the lightest of all the Max Wedge cars from 1962, with a shipping weight of 3185lb.

Without question, the accidental downsizing of the line of 1962 Chrysler Corporation B-Bodies turned out to be a sales disaster. However, history has shown that the move to smaller, lighter cars from the automaker greatly contributed to these cars becoming the hottest passenger car products in the domestic market. ‘Wolf in sheep’s clothing’ is how these cars looked, but once the engine was fired up, it was very apparent that there was some serious horsepower under the hood. It truly was a silver lining to see the launch of the changing of the image of Dodges and Plymouths in the eyes of the youth market starting with these high-horsepower Maximum Performance vehicles.

… was found in a chicken shed…

The ’62 Plymouth Savoy was shorter, narrower, lighter and more

powerful than its counterparts from GM and Ford.