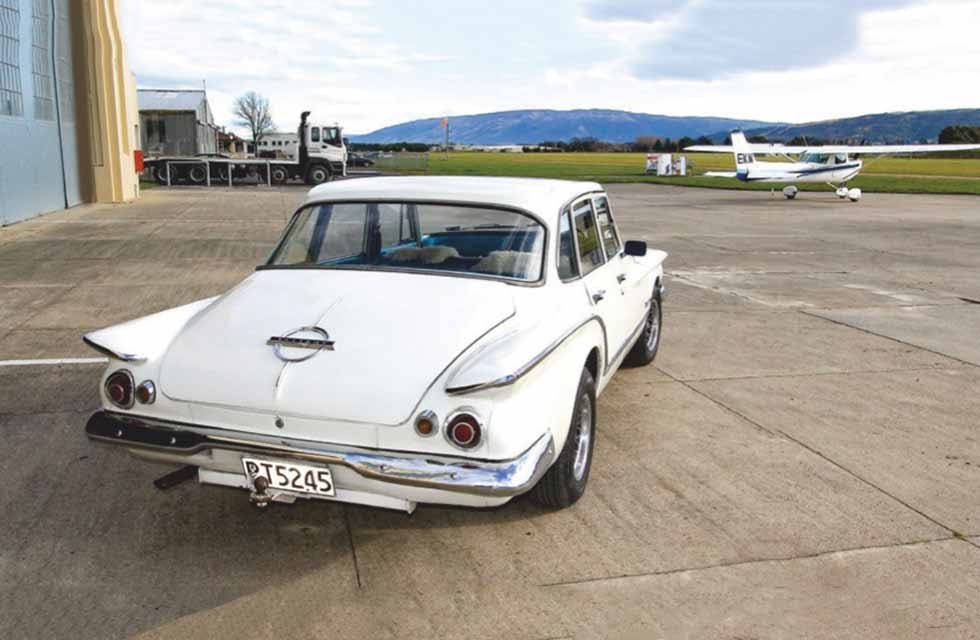 Dictionary definition of ‘Valiant’: possessing or showing courage in hopeless situation, as in, ‘it was courageous of the automaker Plymouth to name a car “Valiant” in the ’60s and ’70s because the term usually refers to a hero or describes a really determined effort that doesn’t end well’. Words and photos: Quinton Taylor.

With their varied membership and their connections, car and motorcycle clubs have the ability to get behind community causes, often making a substantial financial difference to those organizations. In 2018, we met an individual with connections to many of those groups: Heart Kids Otago service coordinator Cecilia Sullivan-Grant, MNZM. In addition to her strong community-focused life, Cecilia has another interesting side: a surprisingly deep knowledge of classic and vintage cars, and a passion for warbird aircraft.

Cecilia let us in to see a car that, although rare, does not lead a cosseted life in her garage. “It’s a 1962 ‘S’ series Chrysler Valiant, which my former husband, Peter, and I bought from Leo Leonard in Timaru. The fact that it was back when Leo Leonard still had a car-sales yard tells you how long ago it was. Our car now belongs to myself and my daughter, and we have owned it for 37 years,” Cecilia explains.

A new dual brake system has recently been added for safety and, as usual for a car of its age, various items have been replaced, such as a radiator and spark-plug leads. Cecilia thought it might also at one time have had new pistons fitted to its Chrysler Slant Six six-cylinder engine.

Cruising in the ‘S’

The 1961 Chrysler Valiant R- and S-models were big cars when they arrived on the Australian market. In the US, they were known as ‘Plymouth Valiants’ and were Chrysler’s first attempt at a compact model. For the time, the styling of the R- and S-models was quite edgy and advanced. Later models added a more conservative touch, along with an expanded model line-up of cars; wagons; pickups; and, of course, the Charger coupé. It wasn’t a bad start for the production set up by Chrysler.

In Australia, production of the new Valiant R (RV1) model got under way at Tonsley Park, Adelaide, in South Australia in 1961. The new car was well received, and, with its 225-cubic-inch Slant Six engine more than a litre larger in capacity than those that its opposition, Ford and Holden, could muster, it was the leader in the horsepower stakes by a big margin. The S (SV1) arrived in March 1962, with mainly cosmetic changes, and the more familiar AP5 Valiant arrived in 1963. It was the first car in Australia to have an alternator instead of a generator.

Now nearly 60 years old, the Virgil Exner design has lasted well. Its distinctive styling was eye-catching in its day, and still has a standout quality guaranteed to attract attention, as these cars are a rare sight on the road. We think that it’s not a bad-looking car for a bigger ’60s American design, and, with a respray and the chrome in good condition, this particular car has survived well. The tidy interior looks good; noticeable is the very shallow metal dashboard with a minimum of controls and gauges. The roomy interior is upholstered in blue vinyl, with bench seats front and back. While the first US-imported R-models had a floor-change, the S reverted to a column gear shift.

Once warmed up, the torquey Slant Six provides plenty of lugging power, and ride from the torsion-bar front suspension is soft but free of any thumps or rattles. The Valiant was praised for its good handling when new, and it still stacks up well in today’s traffic.

A passion for big engines

Cecilia grew up on the family farm at Otaio, 15km south of Timaru, where her father instilled in her a strong mechanical sense and an ability to turn a spanner.

Cecilia’s interest in all-things mechanical was sparked by being surrounded by some distinctive cars, which included 1920s and ’30s Rolls-Royces, as well as drophead Bentleys of the same vintage. Darcy Nicholson, a friend of Cecilia’s father, had a Mercedes fitted with a monster 630hp (470kW) Zeppelin engine, and he used to call out to the farm in the car. The car not only had a physical presence, but its passage on the roadways was also unlikely to go unnoticed.

Cecilia also developed her interest in flying at an early age and was involved in the restoration of a Harvard Trainer, the first warbird to enter the civilian aircraft register.

Cecilia has vivid childhood memories of trips in a 1929 Rolls-Royce Phantom, including taking part in the Mount Cook Rally.

“We even toured Australia in it — [an] awesome way to get out of school,” she laughs.

“From when I was about four, I loved riding in the Bentley, especially downhill and at night, watching the reaction from people following in more modern cars to the sheet of flame from the Bentley’s exhaust,” she recalls.

The Valiant might not spit flames, but Cecilia still enjoys driving this classic car.

“We think that it’s not a bad-looking car for a bigger ’60s American design, and, with a respray and the chrome in good condition, this particular car has survived well”

Left: The long and thin steering wheel and bare-necessities dashboard.