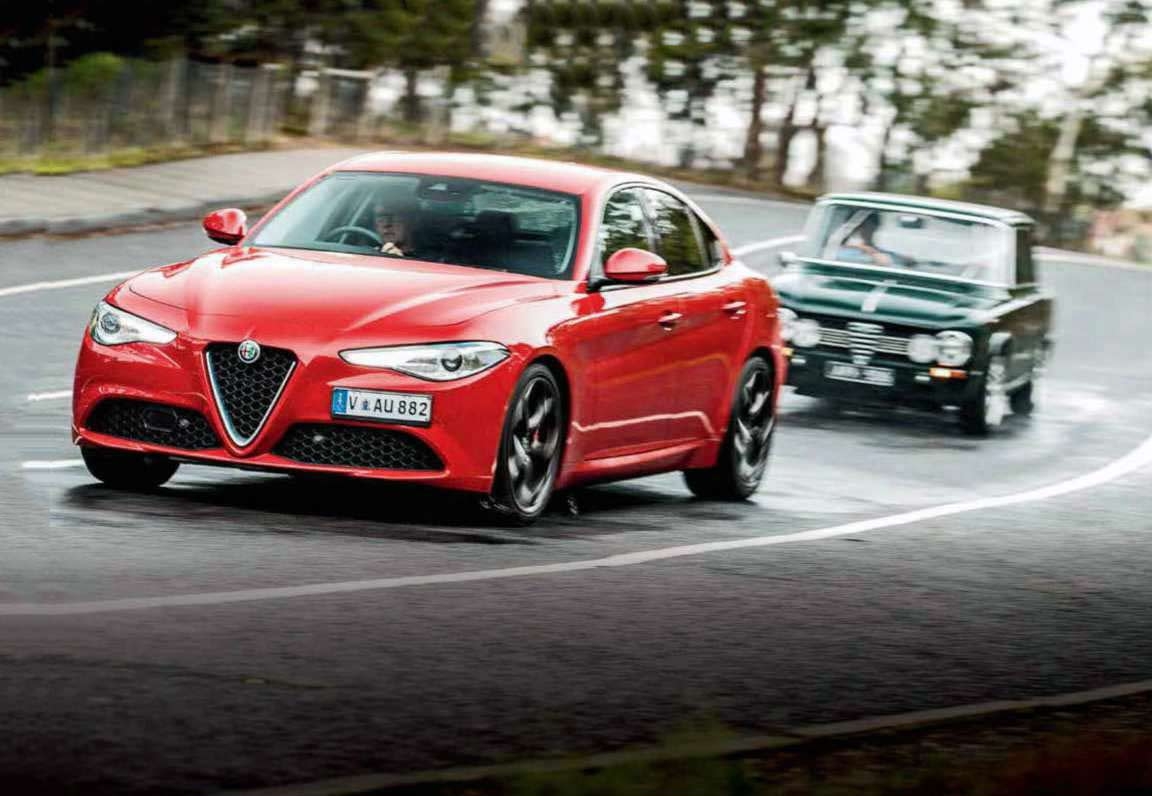 Toybox building your dream garage comes at a price. Giulia, one of our favourite alluring Italians of the 70s, is back, with her seductive powers more potent than ever. Words Mark Higgins. Photos Alastair Brook.

When you ask people to name premium mid-size sedans you get the usual Mercedes, BMW or Audi, with some throwing in Jaguar or Lexus and a few even spouting Volvo. But very, very few would have the words Alfa and Romeo sitting on the tip of their tongue. However, that could well change.

The first rear-wheel drive Alfa to emerge in 25 years, lauded with the Giulia badge, re-introduced after four decades, shows how serious Alfa Romeo is. They claim this all-new Giorgio designed Italian engineered and produced sedan is the renaissance of the 107-year old brand.

When Alfas were the rage in the 60s and 70s the sporty four-door Giulia sedan, launched in 1962, was one of its biggest sellers. A Giulia even won the inaugural Sandown Six-Hour touring car race in 1964.

In more recent times Alfa Romeo has coughed up nothing more than mundane offerings. However the new Giulia is anything but mundane; what’s more it is a genuine challenger to its more expensive German rivals the Mercedes-Benz C200 and BMW 320i F30.

It is achingly gorgeous from every angle and one of those very few cars that you can’t help constantly looking at, like the Aston Martin DB11 I drove last year.

And there is plenty of substance to back up its alluring style.

For starters, in the base model seen here there’s a snappy all-aluminium, four-cylinder, direct injected, twin-scroll turbocharged 2.0-litre providing 147 kW and 330Nm, with spades of mid-range torque and like Alfas of old it produces a pleasingly raspy exhaust note.

It’s bolted to a sweet shifting eight-speed ZF auto gearbox with enough cogs to keep it in the meat of the torque band and ready for action. It can be driven manually with the gear lever or by (one of my very few gripes), ridiculously oversized shift paddles. They get in the way when you try to use the indicator or wipers and they don’t move when you turn the wheel.

After getting set up – adjusting steering, seat, mirrors, pairing phone and music – I pushed the starter button on the leather-wrapped, steering wheel, listened to the engine burble for a moment, and eased out of the carpark.

The thing that got me the first time I turned into a corner was how sensitive and direct the Giulia’s steering is. Its seamlessness combined with a wonderfully balanced chassis means the Giulia is best driven by fingertips with gentle inputs, whether you are firing through sweepers or flinging it through switchbacks. It hugs apexes tighter than a mum hugs a newborn, with excellent body control. If you mash the throttle on exit the tail dances in a very controllable way.

The brakes are super strong but also senstitive and grab quickly like the steering, requiring a little getting used to. These qualities remind me of an open wheel race car, not a sedan, but the Giulia is better for them. Playing a brilliant supporting role are Pirelli’s finest P Zero directional hoops that provide phenominal grip.

Twiddling the DNA drive-mode selector lets you pick one of the pre-set modes or you can create your own. Being a red Alfa it seemed appropriate to have it in ‘Dynamic’ and savour its 50/50 weight balance and to hell with the ride quality. But instead of a rock-hard spine-bashing result it was firm but pliant, coping effortlessly with our crap roads.

Then I gave ‘Comfort’ a go and was delighted that the Giulia kept its livelier throttle and gearshift responses and beefier steering, yet softened the ride appreciably. Brilliant.

Like the outside, the classy interior boasts loads of flair with leather draped over the seats and door cards. Throughout are touches of chrome, carbon fibre and piano black garnish for a premium ambience. The deep-set instruments hark back to Alfas of old and the 8.8-inch infotainment system, incorporating a 10-speaker audio system, is a breeze to use. Although the entry-model Giulia misses out on the sport seats of the higher models, the support and comfort of the leather clad pews is excellent. Three-stage seat heating was welcome in the depths of a Melbourne winter.

The high waistline sacrifices some visibility, a case of form over function, but the thick A-pillars reduce your view through right-hand corners and roundabouts making the spotting of cyclists and motorcyclists bloody difficult – you find yourself responding by looking both sides of the pillar.

Safety wise it protects with forward collision warning with autonomous emergency braking and pedestrian recognition, integrated brake system, and lane departure warning systems. The new Alfa Romeo Giulia easily lives up to its iconic badge, restores the romance and charm of the brand and is a good-looking, sporty, mid-size premium sedan that delivers driving enjoyment.

ABOVE Brakes include autonomous emergency actuation.

The original Alfa Romeo Giulia TI (Type 105) was unveiled in June 1962 at the Autodromo Nazionale Monza grand prix circuit and was the first of the Giulia family of cars produced from 1962 to 1978.

The “TI” classification referred to the Italian touring car class known as Turismo Internazionale and was previously seen on the high performance 1900 and Giulietta sedans in the 1950s.

Alfa was one of the first manufacturers to insert a powerful engine in a mass-produced compact four-door sedan and the Giulia came with a 1.6-litre alloy, twin cam four-cylinder engine, producing around 70 kilowatts. Most had a 5-speed manual transmission, drum brakes, and all wore Pirelli Cinturato tyres.

Marketed as a six-seat family sedan due to its column shift and split bench front seat the Giulia had cloth and vinyl upholstery, a strip speedometer and a black steering wheel with two ivory-coloured spokes. The gear lever found its way to the floor in 1964.

The Giulia range expanded in 1963 to include coupes and convertibles with engines ranging from 1.3 to 2.0-litres through the model’s lifespan that ceased in 1976, a year before the sedan’s demise.

A Giulia TI Super sedan was a special road-legal limited sports model, fitted with a more powerful engine and many lightweight components for racing use.

It received racing homologation in May 1964, campaigned successfully in the European championship and won the inaugural Sandown six hour touring car race later the same year.

A star of the silver screen and used by Italian police, the Giulia was featured in Michael Caine’s movie The Italian Job.

Then in 1974 the Giulia Super range was re- released as the Nuova Super range, (but looked the same), available with a 1300 or 1600cc engine. It had a black plastic grille and flat boot lid.

Production ended in 1977. The last Giulia launched was the Giulia Nuova Super Diesel, Alfa’s first diesel car. It lasted a year and a production run of 6,537 units. The Giulia name then went into hibernation for 40 years.