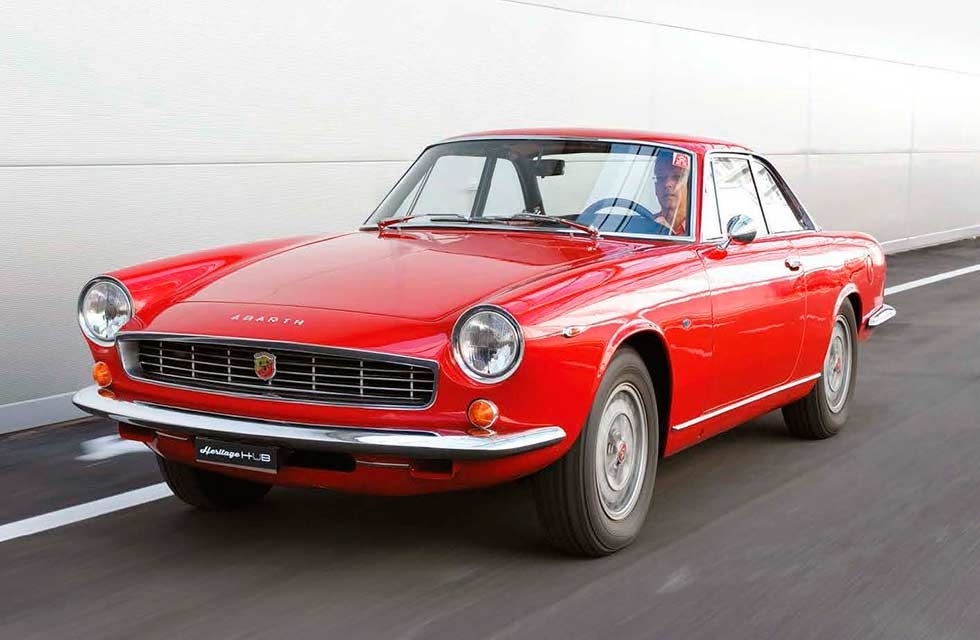 Tiny sports cars based on the Fiat 500 and 600 – that’s what Carlo Abarth was really famous for in the late 1950s and early 1960s. But the founder of the Scorpion badge had many other strings to his bow, not the least of which being dabbling in grand touring cars.

The idea for an Abarth GT sprung up when Fiat launched its new range-topping six-cylinder models, the 1800 and 2100, in 1959. These were big, comfy saloons but Fiat chose not to launch a sporty version (at least for the time being), so the door was wide open for specialists to pounce. Moretti was one, but it’s Abarth we’re interested in for this feature.

Abarth decided to base its new GT car on the larger-engined of the two Fiat saloons, the 2100. For its new sporty application, Fiat’s berlina platform was shortened by 20cm in the wheelbase. Abarth asked one of its favoured coachbuilders, Serafina Allemano, to come up with two new bodies, a coupe and a spider. Freelance designer Giovanni Michelotti would pen both shapes, and his resulting designs were exceptionally clean, with a wing line running straight through from headlamps to the tail, and smooth body sides.

Launched in 1959, the very first versions had single headlamps with large secondary lights below and foglights inset into the front grille. While the Coupe’s basic lighting set-up was never altered, the shape of the front end was soon smoothed out. While the open-top 2200 Cabriolet shared basically the same design as the Coupe, it was given a very different front end, featuring slanteyed quad headlamps and a reshaped front grille – not an entirely happy look, it must be said, and by 1960 it too had been given a single-headlamp treatment.

Mechanically speaking, Abarth’s 2200 models used an expanded version of Fiat’s 2100 engine, taking the bore out from 77mm to 79mm and increasing the capacity to 2162cc (hence ‘2200’). With three Weber 40DCOE twin-choke carbs bolted on, a power output of 135hp was achieved. Since the bodywork was made of aluminium, weight was kept low, enabling Abarth to claim a top speed of 122mph. Engineer Giorgio Valentini was in charge of the chassis, reinforcing the platform and sills.

He also introduced a couple of further tasty mods: an improved gearchange and four-wheel disc brakes (the latter sourced from Dunlop in the UK). The Abarth 2200 Coupe slotted in as an upmarket model with a cabin luxuriously trimmed in leather.

Within two years, Fiat had replaced its 2100 with the higher-capacity 2300. It was only natural that Abarth should pursue a new model using its own interpretation of the bigger engine. The straight-six unit was now given completely square internal dimensions (bore and stroke both 79mm), resulting in a capacity of 2323cc. Strictly speaking, that should have made the Abarth a ‘2300’ but the ‘+100’ precedent was already there, so Abarth called it 2400. With three Weber carbs fitted, plus new manifolds, cylinder head and exhaust, the Abarth-prepared powerplant developed 142hp at 5800rpm.

At the March 1961 Geneva Motor Show, a different coachbuilder, run by Ezio Ellena, had proposed a new coupe based on the Abarth 2200, presented on the Ellena stand. This was not dissimilar to Allemano’s in terms of its cleanness of line, but it differed in having rounded wheelarches, rather than Allemano’s squared-off ones, an oval front grille, no rear quarter-lights, a wraparound rear screen and a chrome strip along the sills.

Perhaps because the Allemano 2200 hadn’t sold brilliantly, Carlo Abarth decided to go with Ellena’s design for the new Abarth 2400, which was revealed at the 1961 Turin Show. This was revised again from the Geneva car: although it still had an oval front grille and rounded wheelarches, it now boasted a prominent swage line stretching from the front arch to the tail and new grilles in the front wings.

Few commentators liked the Ellena body, it must be said, and sales were not buoyant. A somewhat fickle Carlo Abarth then went back to Allemano for one final evolution of the Abarth 2400 in 1962. What eventually emerged was a combination of the front end of Allemano’s design with the tail of Ellena’s (including its more rounded rear wings and horizontal, rather than vertical, lights).

By then, a spanner had been thrown into the works: the 1961 Turin Show had seen Fiat reveal its new 2300 coupe model, a direct rival for Abarth’s own coupe. The shape was taken from Sergio Sartorelli’s 1960 prototype design for Ghia. As it happened, the more powerful 2300S version had an Abarth connection, since the Scorpion made its aluminium crankcase and some gearbox parts, as well as doing the road tests for every single Fiat 2300S coupe.

Frankly the Ghia-bodied Fiat was no match for the decidedly sportier Abarth 2400. The aluminium-bodied Abarth weighed only 1075kg, versus 1300kg for the steel-bodied 2300S. When combined with extra power (142hp for the 2322cc Abarth as against 136hp for the 2279cc Fiat), performance was significantly better. It boasted a top speed of 135mph, for instance. The styling was far less fussy, too.

However, the price was the killer: at 3,313,000 lire, Abarth’s offering was far more expensive than the Fiat (which was priced at 2,600,000 lire). Although Abarth’s 2400 was still being displayed at the 1963 Turin Motor Show, its lifespan was pretty much over by then. Total production is thought to be of the order of 12 examples. After production had ceased, the 2400 did make one further appearance. When it became clear that Abarth’s OT 850 would not be ready for the 1964 Geneva Motor Show, Carlo Abarth decided to display his own personal 2400 coupe there instead – this very car.

Yes indeed, the 2400 you see on these pages is the very example that Carlo Abarth chose to use as his personal transport, including daily commuting and holidays in his native Austria. In fact, he loved this car so much that he kept it for the rest of his life.

Carlo’s 2400 is now part of the FCA Heritage Hub collection and has made regular appearances at many classic rallies, including Silver Flag, Sestriere and the Targa Florio, on the latter occasion with FCA Heritage chief Roberto Giolito at the wheel. He told us: “It’s very comfortable for a person of my size. I can really understand why Carlo used it to follow his drivers in races.”

Giolito is a fan of the car’s shape, too: “This is one of Michelotti’s best designs. It’s very simple, with very clean sides, and it manages to look not too much like the Fiat 2300 S – more like a contemporary Maserati or Ferrari. The sleek glasshouse makes it look very fast, and the die-cast engine is aesthetically beautiful.”

Many detail touches impress, such as the teardrop front wing indicators, Talbot Berlina bullet mirrors, Campagnolo rims and Allemano ‘A’ badges. Meanwhile, two specially made suitcases (made of cardboard and vinyl) fit the boot perfectly.

Carlo’s personal touches can also be found inside, including a unique Abarth steering wheel with a thick leather rim over a metal centre, Dymo labels for the controls (done specifically for Carlo), as well as an ashtray (he was a notorious smoker).

You can almost smell Carlo’s cigarette ash as you step inside. Authentic patina is evident everywhere: cracked red leather seats (the rear ones with zero legroom), red door cards and a plastic front passenger footrest that looks like a giant stick of rock. The super-high quality items of brightwork – seat adjusters, door furniture, slam panels – have an aeronautical feel to them. The milled instrument panel houses a 230km/h speedo and a rev counter with a 6000rpm redline. Five minor gauges also nestle in the binnacle, at the bottom of which are delightful green indicator arrows.

To drive, the first thing you notice is the engine sound: a beautifully gruff straight-six with a hard-edged camminess, distinctively different from other sixes of the period. It’s not the last word in sophisticated refinement but it is full of charisma, and you can see how this would have been a great grand tourer in period.

The gearbox is very positive and easy to throw around the gate, the canted-over lever falling nicely to hand. It’s only got four ratios, though, and could definitely do with an overdrive. Overall the car is easy to drive. The heavy steering might be cumbersome at low speeds but it’s always full of feel. There’s not too much body roll around corners and it remains very stable for a live-axle car. The Girling discs on all four wheel wheels provide confident stopping power, even if a hefty hoof is required.

Is it a surprise that Abarth’s pursuit of GT cars pretty much ended with this car? Perhaps not. Carlo’s real prowess lay in lightweight cars that shone on the race track. The 2400coupe has the look and feel of a car that Carlo created for himself to drive every day – which is, in fact, exactly what it is. I must say I do understand: it really is a wonderful thing.

No road-going Abarth ever had an engine bigger than this. Pulls strongly and suits the grand touring ethos well. Carlo Abarth owned this car his whole life. Shape is exceptionally smooth, cabin luxuriously trimmed.