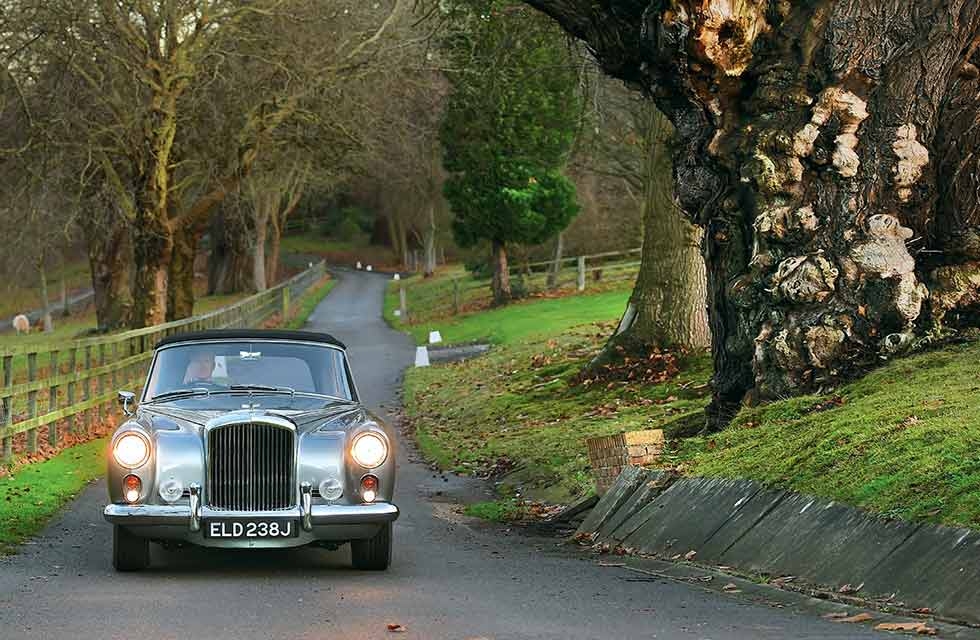 Hell-bent on perfection One man’s mission to return a Park Ward Bentley Continental S2 to its original glory, five years in the making. Words Martin Buckley. Photography Will Williams.

Restoring a Bentley has never been a job for the faint of heart. But, as the veteran of several concours-standard E-type builds, Mark Nobbs must have considered himself more qualified than most when he committed to rebuilding this S2 Park Ward Continental, bought with a friend as a running car with an MoT certificate.

Five years, a change of co-owner and £100,000 in restoration costs later, Nobbs is an older, wiser man who, while pleased with the results, freely admits he would not be in a hurry to tackle another Rolls-Royce or Bentley rebuild. Then again perfection, or as near to it as possible, never did come easily or cheaply. “The fact that it took five years to do was frustrating in some respects,” says Nobbs, “but we wanted it as close to concours standard as we could get.”

“Removing the Bentley’s body from the chassis was a gargantuan task: it’s the size of a small truck and seriously heavy”

Like the S2, Nobbs is of ’60s vintage and has been restoring cars since he was 16 years old. Beginning with a Mini – “because my parents didn’t want me to have a moped” – he quickly progressed through an Austin A40, MGBs and even a Ferrari 308GT4 that he bought from a pig farmer near Portsmouth. He soon got the bug for Jaguars, and his second E-type restoration was a seven-time concours winner. Nobbs likes to lose himself in the detail; handy if your aim is to build cars to the highest standard. By day a leadership development consultant, he set up his own practice six years ago and views his car restoration hobby as a form of relaxation. It isn’t a purely cerebral pursuit – he can work with hands and brain together: “I can spend a month working on one component and I like originality. I even restored the hose clips on the Bentley.” If he has a preference for British cars, that is not say Nobbs is only focused on glamorous, big-money projects: he restored a Triumph Dolomite 1850HL last year, just because he wanted to save it.

This Park Ward Continental Drophead is one of 63 right-hand-drive examples from a total run of 125. Chassis BC96CZ, ordered in Shell Grey with a grey hood and grey leather, was delivered in chassis form to Park Ward in November 1961 and shipped to its first owner, John Hood in Jersey, by British Rail at the beginning of March 1962. Retired Sudan plantation owner Hood had paid £6250 for the Bentley, specifying a special-equipment radio, India tubeless tyres, electric windows, an aerial and a heavy-gauge driver’s seat frame, but, interestingly, not power steering. A few years later, Hood bought one of the seven right-hand-drive Ferrari 500 Superfasts, and the cars must have shared the same garage. The new Ferrari cost nearly double what he’d paid for the Continental.

‘People stop to gawp as it wafts by; you feel like a film star behind the wheel, which is exactly what its creators intended’

In 1970, he sold the Bentley to a Harley Street doctor called Wade, at which point the car lost its Jersey number ( J 124) and was issued with its current (and non age-related) ‘J’ plate.

Dr Wade owned the car for the next 40 years and changed it from its original Shell Grey to a mid blue that is thought to have matched the silks of his jockey – a huge bundle of race-day tickets attached to the glovebox lid told the story of the doctor’s abiding interest in horse racing. As a Jersey car it wouldn’t have gone far, and whenWade parted with the Continental in 2014 it had still only done 42,000 miles. Hence Nobbs’ decision not to rebuild the V8 engine, but simply treat it to a new water pump and refurbish the radiator and all the electrics.

The rest of the car presented several much more complicated and time-consuming problems, and the decision was taken early on that the body would have to come off the chassis to really do the rebuild justice. Having carefully stripped the car himself, the refinishing and repainting of the body was entrusted to Classic Coachbuilders of Sittingbourne while Nobbs focused on the major mechanical components. Classic Coachbuilders also retrimmed the car in Cranberry leather to give more of a contrast than the original light grey.

Nobbs removed the interior woodwork for re-veneering by Silvercrest of Iver, while the brightwork was sent to a variety of chromers. The Park Ward S2 body differs from other Continentals in that it is a mix of steel wings – stamped out on a 300-tonne press – and aluminium doors, bonnet and bootlid.

They have a well-deserved reputation for rust, although this one could have been worse. The main areas requiring attention were the boot floor (which was replaced entirely), plus the front wings around the headlamps and where they meet the sills.

“Because the doors are so long, Ian Hutchins and Gerry Coveney at Classic Coachbuilders spent months replacing the inner and outer sills and making the A- and B-posts rust-free and properly strengthened. It was all perfect, including the panel gaps and how the doors operate.”

Months were burned up in the spray booth to finish the long stretch of bodywork between the front and back.“If you look at its side profile,” says Nobbs, “there is a smooth line that starts at the tip of the front wing and goes right along the side of the car, under the windows, until it meets the tip of the peak on the rear fin. In my opinion, Bentley ruined this on the S3.

Nobbs was surprised at how basic the construction of the Bentley is compared to the E-type: “Removing the body from the chassis was a gargantuan task – it’s the size of a small truck and seriously heavy.

“In fact, everything you work on is huge and weighty, but most parts just bolt on and there isn’t an enormous amount of skill involved in taking it apart and reassembling. Stripping down all the chrome components, especially the window frames, seemed to take forever, though.” Having spent months just taking the blue paint back to bare steel and aluminium, nine coats of the original Shell Grey were then applied. The refinishing of the engine bay was reasonably straightforward, in contrast – if only because the 6.2-litre V8 and most of its ancillaries are finished in gloss-black paint.

In the midst of all this, Nobbs’ original co-owner of the Continental was forced to pull out and was replaced by Roger Huntingford. He already owned a Standard Steel S2, a Silver Shadow and a variety of Jaguars, and was able to give Nobbs the support required to see the project through to the finish last year.

In some ways, he reckons the post-restoration shakedown has proved to be the most frustrating part: “Just when you think everything is perfect, you find there is more to do. We had the car surveyed when the restoration was complete and that threw up a few bits and pieces that still needed to be done.

“We did all this and sent the car to Frank Dale & Stepsons in London, who came up with a list of about 30 further things that would require doing to make the car perfect.”

Most of these items were minor: the wrong washers on the exhaust mountings, no shields for the brake servo and missing dust covers on the throttle linkages. All easily fixed with another day under the car. The bigger issues, says Nobbs, were throttle linkages and gearchanges, and setting up the steering: “Getting the car to glide smoothly through the auto ’box and kickdown correctly is a complex job, and one that was too difficult for us. As was adjusting the steering box. So back to Frank Dale’s it went again, which meant more time and more money. It seemed that every time it looked as if the S2 was finished another problem presented itself.

“It was not until I really drove the car that I began to notice little things that were not perfect. For instance, it was charging post-restoration, yet during the early testing the regulator box failed and the water-temperature gauge started to play up. Then the hood motor stopped working; it was only a fuse, but it had never failed before and, having rebuilt the motor and reconditioned all the moving parts, we didn’t expect that. Then there are the little vibrations or tiny noises that hadn’t been noticed before that start to evolve, so more time is spent sourcing them and fixing them.”

Remarkably, our photoshoot is Nobbs’ first chance to drive the Bentley after its most recent and – hopefully – final round of fettling. He looks apprehensive as the huge convertible whispers out on to the damp Buckinghamshire lanes, but returns beaming: “It felt like driving a brandnew car. There is no power steering, yet it turns effortlessly. It handles really, really well and swerved around the puddles like a sports car.” The S2 Continental owns a space on the road like almost nothing else. People stop to gawp as it wafts by; you feel like a film star behind the wheel, which is exactly what its creators intended from a model that was designed specifically to appeal to its ‘glamour’ customers.

Looking out over that commanding bonnet, feeling the silent rush of the all-aluminium V8, being surrounded by walnut veneer and fresh chrome, sitting on the best-quality hide, nostrils assailed by the scent of leather and deep Wilton carpets; it is as soothing as it is ego-boosting. Especially in a car that feels so tight and free from rattles, that changes gear as smoothly as any ’60s Bentley ever did and stops just as effortlessly as it accelerates.

What a car, and what a restoration! Even for a hardened veteran the work took its toll, but the results are well worth it.