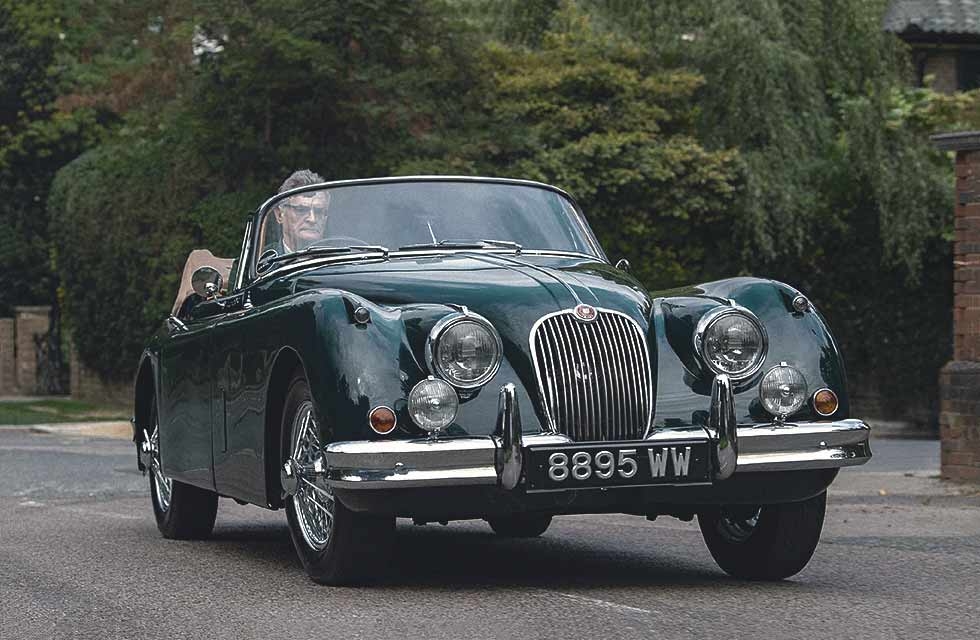 John May XK150 The finest tweaks on a gorgeous drophead. We cast an appreciative eye over this glorious XK150 S drophead coupé, and discover some interesting facts about its colourful life. Words: Ian Seabrook. Pics: Chris Frosin.

The XK150 was the last of the beautiful XK line, which dated back to 1948. The final version, introduced in 1957, was more accommodating, but still retained that classic XK wing line. In style, it certainly had a whiff of the upcoming Mk2 about it, to keep a family feel, with the same 3442cc engine as earlier cars tweaked to give 210bhp in standard form – equivalent to the special equipment versions of the preceding XK140. Initially, the hotter XK150S could be specified, which took power to 250bhp as Jaguar kept discovering new ways to extract power from the relatively-new XK engine.

The S isn’t to be confused with the term Special, which applies to the fitment of disc brakes and wire wheels – something you’ll find on pretty much every XK150 today. Production changes were rife. Initially, only the drophead and fixed head coupés were available, but the roadster, now with a prominent rear deck, arrived in 1958. In 1959, a larger 3.8-litre engine became available, shared with the hottest Mk2s and lined up for the upcoming E-Type. This boasted 265bhp SAE in S form, though the smaller engine remained available. S versions never sold in great numbers – 924 roadsters, 349 FHC and a mere 193 DHC. Production ended in 1960, ahead of the launch of the E-Type. That makes our featured car a particular rarity, though all is not as it seems.

All XKs are capable of catching the eye, but this one perhaps more than most. It’s a truly delightful looking example, just right in every way, from the delicious green paint to the way it sits on its wire wheels. But, all is not as it seems, for this is a car that has changed quite a bit along the way to today. For a start, this car was Cotswold Blue originally, but it was also a fixed-head coupé. It was, and remains, an S-spec 3.8, with triple-carburettors and manual overdrive transmission. The car moved around the country throughout its life, having originally been sold by Ross Brothers in Ilkley, West Yorkshire, the car was in Sheffield by the 1970s, and at some point was repainted white.

A substantial rebuild in the early 2000s saw the car transformed, and the changes were not just skin deep. The chassis was reinforced, perhaps more so than the fixed-heads from the factory. That was probably wise, as the work was carried out by legendary XK fettler John May, and the engine was breathed upon at the same time. Hydraulic power steering was also fitted, though we’re not sure if this was part of this substantial build or a later addition. The car was painted Racing Green, with a contrasting tan hood and interior. It was a substantial overhaul, seemingly built to order for a Doctor living in Birmingham.

Certainly, we could find little to giveaway that this was a conversion, and the entire car is finished to a very high level. It’s a slightly older restoration, so there are very minor imperfections to be found if you really look, like some minor cracking of the veneer around one switch on the dashboard. These are imperfections from use rather than the restoration process however. The mileometer indicates that 31,000 miles have been covered, though we suspect that this was reset at the time of the rebuild, indicating largely gentle use since the work was completed.

Presented for sale by Hexagon Classics, this XK150 retains its original registration number and comes with a substantial history file. London roads are no place to really stretch the legs of such a car, but the engine certainly runs impeccably well, and pulls very strongly indeed. It emits the most wonderful noise, with the triple carburettors slurping fuel and allied to exhaust note that is prominent without being overbearing. The power steering certainly aids both slow-speed manouevring, but also entry/egress, as a smaller steering wheel can be used. The manual gearbox works well, accompanied by overdrive as it should be.

The car feels marvellously tight too, with no shakes or rattles over the pockmarked streets of our Capital. It’s the clearest sign that this conversion has been throroughly considered. Overall, this is a highly desirable vehicle and the price reflects the fact that this is a conversion, even though we could see no reason to warrant such a reduction. It feels the genuine article despite not being so. It’s telling that Hexagon Classics does also have a freshly restored 3.8 XK150S drophead for sale that is the genuine article, for which the asking price is £299,995. The advert for that car reminds us that just 69 right-hand drive 3.8S Dropheads were built, one reason that someone decided the only cost-effective way to own one was to convert a fixed-head. That makes our feature car seem something of a bargain. We certainly doubt the new owner would be disappointed.

Jaguar was always keen to boast of its Le Mans success.

Chassis modifications have been very well carried out. This XK feels very tight.

Aluminium header tank another cooling mod. Otherwise, this is the correct S-spec with triple carburettors and pumpkin orange head (right).

Gorgeous tan interior has worn well. Power steering allows a smaller steering wheel. We suspect that this car would not leave many redundant figures on the speedometer.

This car was manual/overdrive from new.

“…the price reflects the fact that this is a conversion, even though we could see no reason to warrant such a reduction.”

“the work was carried out by legendary XK fettler John May, and the engine was breathed upon at the same time.”