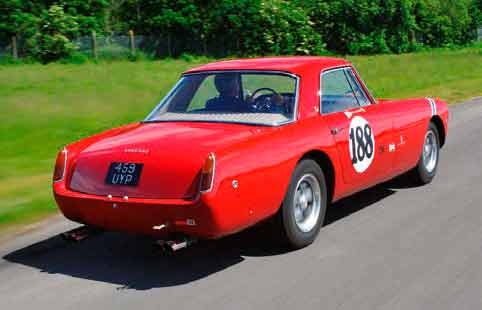 Ferrari 250 PF Bowtie Chevy V8-engined Ferrari: heresy or hero? American Graffiti. Shoving a Chevy V8 into a Ferrari is either arch heresy, or artfully hilarious. Dozens of Ferraris were converted to so-called ‘Bowtie’ V8 spec in period, but there’s just one left: this one. So is this an American dream, or an American nightmare? Words by Johnny Tipler. Photography by Michael Ward.

When you see the signatures of Stirling Moss and Dan Gurney on the dashboard of any car, you know it’s a pretty serious machine. Fact is, this 1959 Ferrari 250 PF is running an American V8 – so does that make it serious or seriously silly? We’d argue the former. Fact is, its Chevy V8 engine is what makes this car special, since it is probably the only one left of the 70 or so Ferraris thus converted in the 1950s and 1960s.

This is a scion of a particularly esoteric branch of Maranello nomenclature, styled ‘Bowtie Ferraris’ because Chevrolet’s badge resembles a bowtie. This niche is catalogued in the book, Bowtie Ferraris by one of this car’s former owners, Randy Cook. In it we learn that, when Fangio drove it in a historic demo at Watkins Glen, he declared it reminded him of the Chevy-powered sports-racers that he was familiar with back home in Argentina; an endorsement of a kind, certainly.

The concept of ditching Ferrari’s glorious V12 for V8 iron may be hard to digest in today’s world, when ‘matching numbers’ authenticity is all-important. Back in the 1950s and ’60s, hot-rod culture was second nature to kids in America, when virtual wrecks could be ‘chopped’ and tuned to become the fastest things on the road. The most straightforward way of achieving that was by transplanting a bigger-capacity engine from an American car. When your Ferrari engine went terminal, or couldn’t easily be fixed, the pragmatic move was to whip out the V12 and install a Chevrolet or Ford unit. Hey presto, your gorgeous Italian stallion was up and running again – at a stroke, going from 3.0 litres to 5.7 litres, with 100 extra horsepower to boot. The Chevy’s advantage was its compact – ‘small block’ – size and short stroke, which reduced piston speed at high revs. It was reliable, too.

Over the years, almost all of these ‘Bowtie’ cars have been reunited with Ferrari V12 power units. And that’s what makes this car so special, because we think it’s the only period V8 conversion left. We’re visiting Roy Kent’s Old Racing Car Company in rural north Norfolk to see 250 PF – for Pinin Farina – number 1175 GT. This car belongs jointly to Tim Luscombe and John Walker, who acquired it recently from Roy. Before Roy bought it in 2017, it had been owned for 20 years by Randy Cook, and features in his Bowtie Ferraris book. Incidentally, Randy Cook wrote a follow-up, called Blue Oval Ferraris, of which there were a number similarly fitted with Ford engines.

Stylistically, the PF is quite restrained, with perhaps a nod to Americana: that coupe roof is redolent of the Ford Thunderbird’s. The 2600mm wheelbase is shared with the 250 Tour de France and 250 Europa but Farina’s shape is more stretched and flattened than the curvaceous 250 Europa, emblematic of the late 1950s morphing into the early ’60s. But this car look rather different to standard. Instead of Borrani wheels, it’s running on five-spoke American race wheels. The bumpers have been removed. And period racing bucket seats are installed in place of the original cosy sandy-beige leather touring seats.

‘Where were you in ’1962?’ goes the promo line for the immortal film, American Graffiti. In the case of our 250 PF, that would be gearing up for living in the USA. As for the graffiti, our 250 PF is peppered with it: from Chevrolet and Offenhauser logos to Sports Car Club of America decals and badges. That lateral racing stripe, too, and Dan Gurney’s signature, even. There’s the Road America badge, and the dedication to Art Eastman, who was a journalist friend of Randy Cook’s; Art had always been very supportive of this car. There’s another one under the bonnet which says Nickey Chevrolet, a business highly regarded for building hot-rod engines.

You can’t help wondering if the Americans who saddled up to the Prancing Horse 60 years ago felt short-changed when their engines failed. Possibly the first switchover from Ferrari to Chevy power was carried out in 1956 by Jim Hall of Chaparral fame in his Monza. Then Formula 1 World Champion Froilan Gonzalez had a Chevy motor inserted into his 1954 Grand Prix Ferrari in 1957 so he could race it in Formule Libre events.

Seemingly nothing was sacred back then: the 1958 Le Mans-winning 250 Testa Rossa of Olivier Gendebien and Phil Hill subsequently received a Chevrolet conversion, as did the 375 Plus in which Umberto Maglioli won the 1954 Carrera Panamericana.

This 250 GT is one of 170 Series 1 PF coupes that were built between 1958 and 1960. Its journey to the Chicago engine specialist that installed the GM V8 started in Rome and went via Las Vegas and Los Angeles. This is a 1959 car, originally painted silver, and imported into the US in 1965 by former Ferrari Owners’ Club president, Ed Niles. In the custody of one Darryl Leavitt of Las Vegas, it was sent to Chicago to have the transplant done, most likely at Joe Marchetti’s International Auto by Tom Arra and Ronnie Kaplan, according to Ferrari historian Alan Boe. Marchetti was an independent Ferrari dealer, and also promoted the Chicago Historic races that ran at Road America, Elkhart Lake, Wisconsin.

It’s of note that another Chevrolet specialist was operating in Chicago at the time – Nickey Chevrolet – whose business was building, selling and installing performance Chevy engines, including the Purple People Eater Corvettes. Whether this outfit had a hand in the 250 PF’s transplant is a moot point, but it’s clear the conversion was properly carried out, rather than a back-street hatchet job. The supposition is that the engine from the 250 PF was probably shoehorned into a more valuable model.

Ferrari engines were not built in anything like the volumes of the mass-produced Chevrolet V8s and, being closely related to racing units, were relatively fragile. The 250 PF was powered by the 2953 cc SOHC Ferrari V12, fed by three twin-choke Webers and coupled to a four-speed manual gearbox. The Chevrolet small block V8 fitted in this 250 PF is the ‘Extreme Duty’ high-performance version, as fitted to US police cars and probably built in the Corvette engine facility. It was allied to a T400 transmission and Ford nine-inch rear end.

Opening the bonnet, one can’t help but be taken aback at the sight of an alien American engine that’s two pairs of cylinders shorter.

Then you think that, because the V8 sits at the rear of the engine bay, weight distribution might be better; on the other hand, it’s a much heavier unit (535lb versus 382lb).

Although the 250 PF is a Grand Touring car, not conceived with racing in mind, it has done a little mild competition in its time, evidenced by the ignition cut-off switches: “We haven’t found categorically what events the car took part in,” reports Roy, “but we think it raced in the Road America series and we’re almost certain it took part in drag races later on because there’s an archive picture of it on a drag strip.” It ran at Chateau Impney in 2017 and is due back there this summer, and even Goodwood is on the cards.

The bottom line is that this 250 PF has spent longer with the Chevy engine than it ever did with its Ferrari lump. Roy says: “I think that’s the beauty of it; there’s lots of PFs that have got the correct Ferrari engine but that doesn’t make them as interesting or as quirky as this one. It’s a quest for someone to see if they can find the original engine; they do come up from time to time, but we just felt it’s gone beyond that.”

And how does it perform? It’s certainly got attitude. When we fire it up, instead of the aristocratic V12 tenor, there’s a thrumming bass rumble. There’s a slight lag in throttle response, probably because the linkages are a tad worn (scheduled for rectification). It’s a slight struggle to get into the cabin but once in, it’s quite cosy. In the driving seat I’m close up against the door, and the wheel is right there ahead of me, while the seat is slightly offset to the left in relation to the wheel.

I familiarise myself with the four-speed shift lever with its syringe-style finger-pull reverse. Let loose on the smooth tarmac of a former American airfield, when I put my foot down it suddenly picks up and launches itself down the runway. There’s an enormous amount of torque in every gear, and performance can be characterised as brute force, determined and relentless as it surges towards the horizon. I make several passes and it feels quicker each time, seeming to relish the opportunity for a shakedown.

I tackle a couple of curves reasonably fast, and the back end squats nicely as it digs in, the long nose rising, and it powers predictably around with no drama. There’s not much feel to the brake pedal but it does stop eventually. The most dated aspect about the driving experience is the steering, which suffers from a certain amount of play, though once that is eliminated it should be taut and sharp. Tim thinks the front end could be further stiffened for racing, though it’s good enough as it stands for mild competition purposes. It feels like a period racing car – which of course is what it is. It may not have the urgent, high-pitched scream of Ferrari’s V12, but there is something doughty and invincible about the snarling V8 – a little bit of the American dream in Maranello.

Stickered-up, bumperless look is very American, but it’s the snarling police-spec 5.7-litre V8 that makes this 250 PF really stand out.