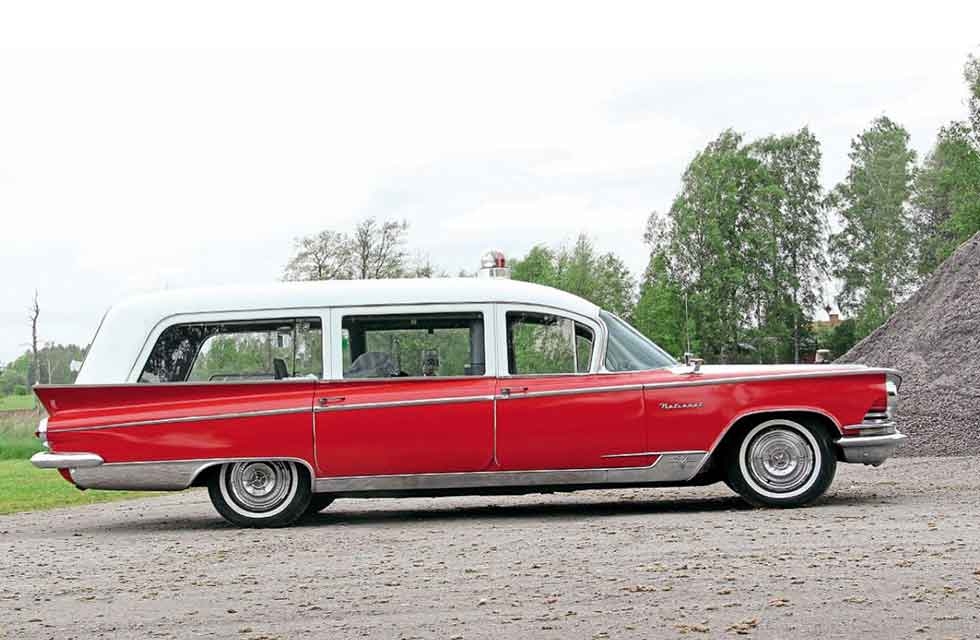 This magnificent ambulance must have saved a few lives in its time, and now one lady has returned the favour − Dr Kimberley Knapman brought the museum-stored Buick back to the land of the living… Words: Nigel Boothman and Erik Stigsson. Photography: Erik Stigsson.

What the doctor ordered 1959 Buick Ambulance

Sometimes you come across a car and an owner who could have been made for each other. Kimberley Knapman is a doctor from the west coast of Sweden, though she’s chosen a perfectly colour-coordinated nurse’s outfit for these shots. She’s had a thing for 1959 Buicks for quite a while and found this one on Craigslist, all the way over in California. And if you’re a medical practitioner with a thing for ’1959 Buicks, why bother with a regular sedan, convertible or even station wagon, when you could have one of these?

It’s an ambulance conversion made by the National Body Manufacturing Company of Knightstown, Indiana. We understand that Buick conversions are more commonly seen from another firm, Flxible (not a typo!) though Flxible itself was swallowed by National in 1966. National was established in the 1940s to produce various professional vehicles such as hearses, ambulances, flower cars and eventually airport limousines. They worked chiefly with Chevrolet and Pontiac chassis to undercut more expensive Cadillac-based stretched vehicles, but later in the Fifties they took on Buick and Oldsmobile-based designs too, of which this is one.

It came from the factory as a LeSabre station wagon, model 4435. National raised the roof to give more clearance inside and also made new rear doors, somewhat longer than standard, to improve access to patients inside the vehicle. Together, these changes mean that very little above the beltline remained standard, with new side-glass all round and a special taller side-hinged rear door to give uncluttered access to the rear.

National offered various trim levels, just like the parent manufacturers of the vehicles they converted. This one is something of a special edition and has more chrome on the body than the base version − the trim pieces down on the front fenders are from the more expensive Electra model; Buick’s new model name which took over from the previous Roadmaster and Limited badges after 1958.

The Electra connection doesn’t extend under the hood, though. Here we find a standard LeSabre V8 engine of 364cu in and 250hp, driving through a Dynaflow automatic. On the LeSabre, power brakes and power steering both had to be ordered as an option and, while this car has power brakes, Kimberley would have preferred power steering too, but it’s no problem, really – she can handle the big Buick just fine.

Kimberley was able to discover some nice snippets from the ambulance’s history. It had a long working life with a hospital in Minnesota, serving for 18 years until it was sold in 1977 to a company in the same state which worked with hospital equipment. We don’t know the details of its role in these years, but even then it may have been seen as a collector’s piece. Today, there’s no sign it was ever restored, suggesting minimal use since its original job at the hospital.

Some time after this, it passed into the hands of a private collector who also put very few miles on it, consigning it to a stationary life in his museum. And it was this gentleman who offered the car for sale when liquidating his collection.

Assessing the condition of a car on the other side of the world via a few photos isn’t easy, but Kimberley was lucky enough to have a good friend living close to San Francisco, where the car was for sale. He promised to check out the car and report back. It seemed to be well protected, smart and sound, but was suffering from a lack of use after standing in the museum for a number of years. The brakes had stopped working and the water pump had started to leak. This wasn’t enough to deter Kimberley, who arranged for the car to be trailered to the port and shipped to Sweden. Right after Kimberley made the deal, a Buick collector, also in Sweden, amazingly offered to pay more, but the seller stood by his promise and the car was hers.

When it landed in Gothenburg, Kimberley began the task of getting the car ready for the road. Her father is English and clearly a bit of a car nut, because he knew a company over here that could restore the water pump, which fixed one fault. He also helped Kimberley to get the speedometer in good working condition, after it clearly hadn’t functioned for many years. A full restoration of the brakes meant that around 5000lb of Buick would stop just as smartly as it went. Sure enough, it passed the Swedish safety inspection and Kimberley began a highly enjoyable life of cruises and car meetings.

One of the most fascinating aspects of this vehicle is its untouched state. It still has a lot of old equipment both inside and out, as though it’s fresh from a shift at the hospital in Minnesota, back in the Seventies. First of all, it still has the original bed for the patient and also some special doctors’ tools and equipment and even medicines. There’s also a radio under the dash to keep in contact with the hospital dispatcher, with the hand-held unit on a hanger to the right of the steering wheel. Then, up on the roof, the enormous warning light still works, so if Kimberley really wants to attract attention, she can fire up the deafening siren.

Speaking of attracting attention, as well as this nurse’s dress, Kimberley has a doctor’s outfit which she uses when she takes the ambulance for a ride. When we photographed the car, several guys came forward and wanted a check-up. Whether they had genuine health concerns, an interest in 1959 Buicks or perhaps some other motive, we can only speculate.

Under-dash radio was used to communicate with the base. Original equipment included this stretcher. Extra height in the roof makes this compartment possible.   Rear doors and glass are unique to the conversion. ’1959 Buicks carried over the front grille ‘squares’ detail of the ’58 model. Buick Le Sabre details abound. Ambulance worked or almost two decades for a hospital in Minnesota.