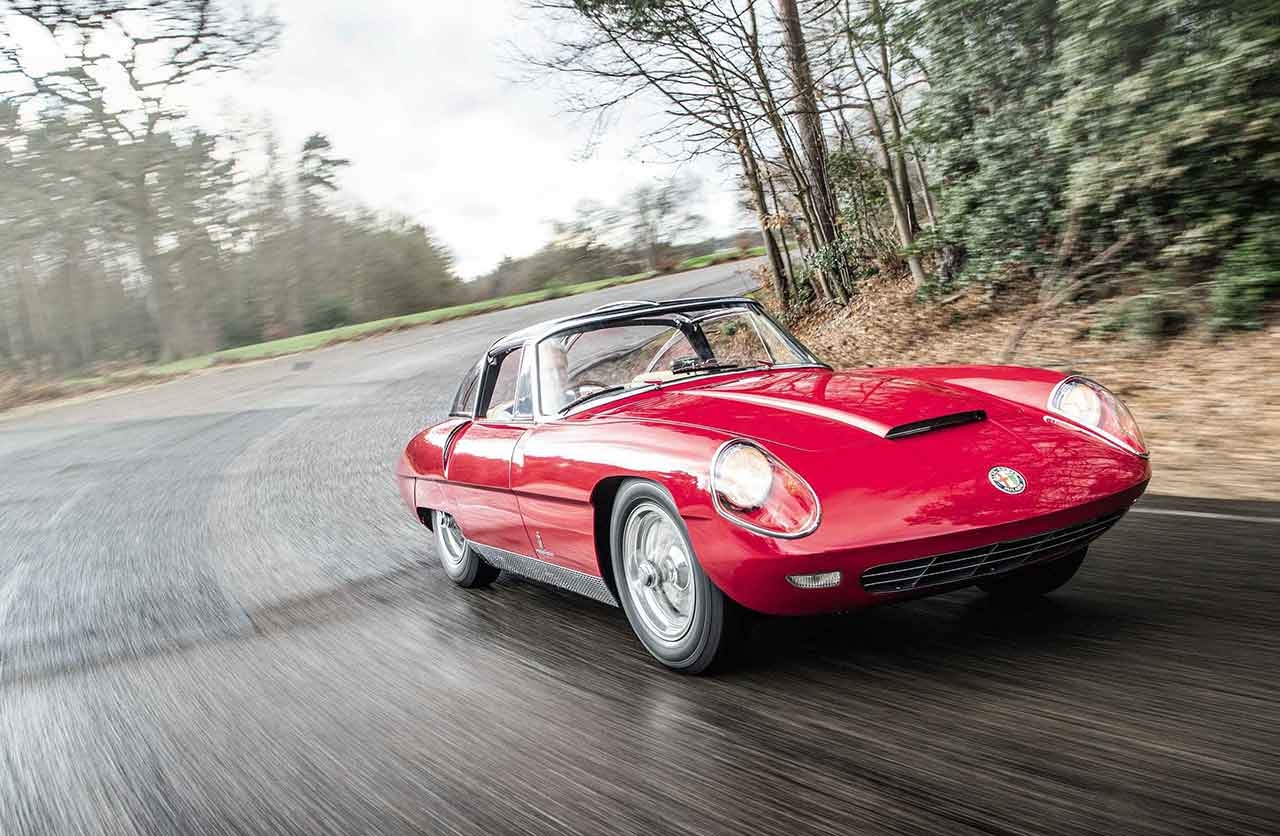 Most concept cars are little more than show ponies. Often they don’t even have an engine fitted and their dynamics are usually just short of non-existent. But not this superb Alfa Romeo Tipo 6C 3000CM. Its Pininfarina styling is startlingly executed but the Superflow IV runs a lot deeper than just magnificent good looks.

Evolving out of the previous Disco Volante or ‘flying saucer’ model, the 3000CM (Competizione Maggiorata – ‘competition enlarged displacement’) was engineered to race in 1953. It featured an larger-capacity 3495cc in-line six-cylinder engine, a backbone-type spaceframe, independent front suspension and a de Dion rear end. Its lairy coachwork was hammered together by Carrozzeria Colli and festooned with scoops, trap doors, filler caps and visible rivets. In total six 3000CMs were constructed, four coupés and two spiders. And – though you’d scarcely believe it from the outrageous styling – this is one of them.

The Alfa works team entered three cars in the 1953 Mille Miglia, with chassis number 0124 driven to an impressive second place by Juan Manuel Fangio and Giulio Sala. Fangio was leading the race but he clipped a stone road marker so had to continue with a broken tie-rod end and, effectively, only one front wheel steering. He still managed an impressive second place behind a Ferrari 340MM. The cars were then entered for Le Mans that year but failed to finish, though Fangio did win the obscure Supercortemaggiore sports car race at Merano in ’1953. The cars were then dispersed, one of them ending up with Argentina’s Juan Perón.

As for 0128, the car featured here, it has had quite an eventful post-racing life (as you can see) and spent a number of years in the Rosso Bianco collection until it was sold off in 2005.

Chassis number 0128 is believed to have been a spare Le Mans car. After gathering dust in the Alfa works for a while, it went to Pininfarina to be ‘reimagined’ as one of the ‘Dream Car’ concepts to showcase the Italian motor industry. Its first iteration was as Superflow I, which appeared at the 1956 Turin motor show in white with a blue stripe along its beltline. It featured mild tailfins, Plexiglas front wing caps, and a wraparound windscreen with a full Plexiglas hood and gullwing roof panels.

Its second appearance, as Superflow II, was at the Paris motor show six months later, where 0128 was painted in red with white stripes. The Plexiglas front wings had been replaced with metal but the tailfins had grown Plexiglas extensions. In March 1959 the Alfa was unveiled at the Geneva motor show as the Spider Super, all in white, without the wraparound windscreen and roof and shorn of its tailfins. This design inspired the Alfa Giulia Duetto Spider that arrived in 1966. The 3000CM was then redesigned for the final time for the 1960 Geneva show as Superflow IV, the car you see here.

So, no show pony at all but a full-blooded works racer which just happens to have been rebodied four times as a show car and now looks like this! No wonder Superflow IV has been a stellar attraction and award-winner at the best concours d’elegance events around the world, including Amelia Island in 2005, Villa d’Este in 2014 and this year’s Rétromobile and Techno-Classica.

At Pebble Beach in 2013 the Superflow was tipped to become the first post-war car to win the Best of Show award. That actually happened a year later, with Jon Shirley’s 1954 Ferrari 375 MM Scaglietti Coupé (also the first Ferrari to win), but the Superflow won its class as well as the Vitesse-Elegance Trophy.

Current owner Steve Tillack commissioned the legendary restorer Jim Stokes to return 0128 to its original Superflow IV condition. He had a lot of input from Austrian specialist Egon Zweimüller, who has a comprehensive archive on these 3000CMs.

With Zweimüller delving into the car’s history and carefully researching its specifications, Jim Stokes corrected the red paintwork back to the original hue, sorted out the chassis mounts and checked all the internal numbers, so now Airflow IV is perfect.

Tillack brings the Superflow down to our favourite test track at Chobham, in Surrey, on a blustery early-summer day. He seems totally unfazed by the conditions. ‘Hey, I’m from California, so this weather is a pleasant change,’ he laughs. Sitting on the glistening track, the Superflow really does look like something from outer space. Imagine seeing it in 1960 with its Perspex Targa roof and fairedin headlights. Now resplendent in the correct dark Alfa red, the car’s lines are glorious. The effect is magnified by the gleaming Borrani wires and off-white leather trim, enlivened further with bright red carpeting.

Then Steve lifts the bonnet. Now you see the serious racing car intent. The crackle-black painted, double-overhead-cam straight-six is long, it’s mounted low (thanks to its dry sump) and well back in the chassis, and it’s festooned with six Weber 48 DOM carburettors. Weight is saved with magnesium used for the gearbox, axle and brake backing plates.

The engine starts with a huge bark. The sound is savage and mechanical and it’s clear those big Webers will be happier when the butterflies are more open than closed. The Superflow is right-hand drive, as many Italian cars of the time were, and the Nardi steering wheel is mounted upright. The seating position is cramped thanks to the very wide transmission tunnel, yet the cockpit feels very airy thanks to the clever roof and clean interior design.

Amid lots of popping and banging at idle (yes, the cams remain in full-race grind) I give the stubby gearshift an exploratory prod. It feels strong and very mechanical, its selectors manipulating hefty dog clutches. The clutch action is not as fierce as I’d expected, but first gear is a very high ratio and the engine needs to be revved hard off the line. That gearshift action proves firm; only at higher revs does it start to co-operate slickly, allowing gearchanges to be snapped through.

The steering is delightful, feeling progressive and as precise as any Marles steering box could ever feel. Shift up through the long gears and the Superflow soon gains serious speed thanks to its lusty and loud 245bhp engine, its power peaking at the 6500rpm redline.

Yet what’s really remarkable is the Alfa’s ride. With the bodywork mounted so low, you’d expect crashing, short-travel suspension. But with wishbones at the front and a de Dion arrangement at the rear, the Alfa’s ride is absorbent and the car feels extremely well planted at speed even though it is shod with period-correct, though relatively skinny, 185 R16 Pirelli Cinturatos. No wonder a 3000CM did so well on the Mille Miglia’s rough roads.

Alfa Romeo came late to the disc-brake party but the drums fitted to the 3000CM are superb. The front brakes are huge, helically-finned bimetallic drums each housing two shoes side by side, giving four leading shoes per wheel. The rear brakes are mounted inboard and are more conventional, but the result is very effective, balanced braking via a very firm pedal.

The targa top is a fabulous piece of Italian design flair. It took quite a bit of careful rebuilding but now the sliding section of the roof runs smoothly on its nylon rollers in their tracks. With the roof open and the anachronistic sidescreens removed, the magnificent sound of that vocal engine can be enjoyed to the full.

What a sensational Alfa Romeo. What a sensational car. A true ‘Dream Car’ with beautiful Pininfarina coachwork improbably married to a full-blooded racing engine and chassis. A show pony? No, it’s a thoroughbred racehorse that just wants to gallop.

Clockwise from below All four iterations of the Superflow, showcasing its evolution as the crazy roof and wings were gradually toned down until Superflow IV made its debut in 1960. Above and right Sliding Plexiglas roof makes for an extremely airy cabin, even if it’s cramped behind that beautiful Nardi wheel; straight-six powerhouse is a racebred work of art.