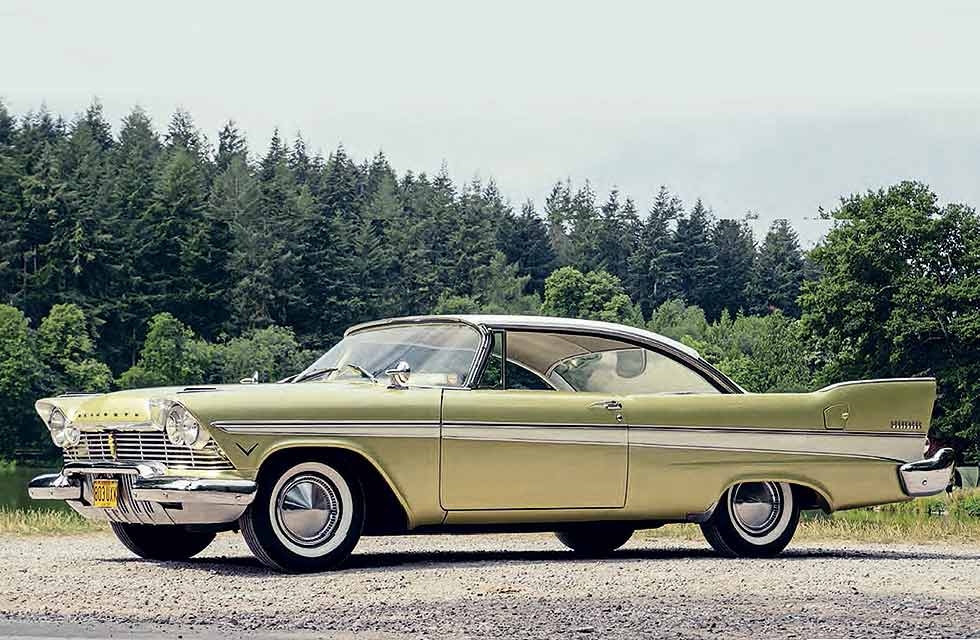 You might recall Nick Parker’s 1973 Cadillac sedan that we featured in our Drive-My test. At the time, Nick mentioned he also owned a 1957 Plymouth − and here it is. “I first saw the Plymouth driving past locally in 2005,” remembers Nick. “Did a U-turn and followed, but didn’t ever catch up. I saw it again four years later at a local meet. Then I visited the place that painted my Cadillac – Hills Motor Craft – the Plymouth was there and I finally got to speak to its owner, Jerry Dunning. Two years later Martin from H ills mentioned Jerry was interested in selling one of his cars, perhaps the Plymouth because he now rarely used it. I’d obviously known of the cars from watching the film Christine, but never expected to own one.”

Nick bought the Plymouth in 2016 and it’s proved easy to own, aside from a few small mechanical issues. “I rebuilt the generator since that was only charging at high rpm and gave everything else a thorough clean and a service. One time, I changed the plugs and immediately lost all the engine power − that was down to the old HT leads breaking up inside − new leads cured the problem. I’ve also put orange bulbs in the front indicators. Another time, I had a blowout when I ran over a piece of ceramic which immediately burst the tyre; new ones were easy to source through Vintage Tyres ( 015 906 12261 / www. vintagetyres.com). Right when the blowout happened, a guy rode past on an old motorbike and stopped, ex cited that he’d seen a ’1957 Plymouth. He showed me he was wearing a Christine T-shirt, then said ‘ but that’s not the best bit’ then showed me his Christine tattoo… ” The Plymouth has a claim to fame, being featured, albeit briefly, in Emelda May’s video for her song Johnny’s Got a Boom Boom. The Belvedere can be glimpsed as the band ex amines it while walking past it in the street.

We don’t know much of the Plymouth’s past, but there’s a Hubbard Motor Sales, Sherman, New York, dealer plaque on the rear. Nick recently phoned Jerry to try to find out more. “He said the Plymouth came in at Southampton Docks, presumably from New York State,” says Nick. “The first owner stripped down the body, put new old-stock front wings on and repaired the lower rear quarters. The underside is original and untouched. He also painted the body in this unidentified green hue.” The Plymouth’s original colour was Desert Gold, but it was repainted about 1 5 years ago. “I’m not sure what the colour is,” admits Nick, “it changes shade from green to almost yellow depending on the sunlight.

“At that stage, the Plymouth was sold to a guy in Cheltenham. Meanwhile, Jerry was looking for a 1958 DeSoto. He heard about a similar car that could be for sale and went to view it. Obviously he realised it wasn’t a DeSoto, but thought ‘Wow, that’s even better looking.’ So, he did some research on ‘1957 Plymouths and bought it. Jerry finished the restoration, fitted a disc brake conversion on the front, since the original ones were apparently horrendous in spite of being factory-fitted power brakes, put on electronic ignition and generally made it reliable. I know he had the bumpers rechromed too. W hen you photographed it, I had the bumper corner ex tensions away for re-chroming, hence the reason they were fitted to the back but not the front. They’re now back on. I don’t know anything else in the way of history, I don’t even know if the 59,208 miles showing is original or actually 159,000 . The underside is really clean and rust-free, so maybe it is − it even looks like the original factory underseal.” An April 1990 New York safety inspection sticker on the screen with a recorded 43,287 miles suggests that 59,000 might well be correct.

I’ve written before about how a chance sighting of brand new 1957 Chrysler products late in 1956 forced General Motors into a radical redesign for their 1959 model range, which merely illustrates just how excitingly different these cars were. Plymouth made dependable but stodgy cars in the early 1950s. Then they − like the rest of the industry − were caught out by Chevrolet’s all-new 1955 models that introduced all-new bodywork with an all-new affordable V8. Plymouth had to up their game although their 1955 and ‘1956 cars were already a big step in the right direction with fashionable tailfins and lowered rooflines. However, no one expected the 1957 Plymouth to look quite this stunning. Put simply, it was the most attractive cheap car on the market. One legend has General Motors styling boss Harley Earl walking into the office of Chevrolet exterior designer CJ MacKichan, throwing a 1957 Plymouth brochure on his desk and asking: “Why don’t you quit?”

A new horizontal grille sat below a bonnet now devoid of ornamentation, save for Plymouth lettering – it was the only Plymouth badge on the car, although model badges were mounted on the rear wings. Top dog was the Fury with the Belvedere below, then Savoy and base model Plaza. Plymouth cleverly anticipated the 1958 law change permitting quad headlights by designing their turn signals virtually the same size as the headlights.

Plymouth’s waistline was low, with tasteful fins rising halfway along the car, then suddenly kicking up to make the roofline seem even lower and sleeker. Indeed, it was lower compared to the ‘1956 − by some three inches on average – yet interior space had improved in shoulder and hip room. Plymouth sedans now had 34 % more glass area and the hardtops claimed an incredible 53% more. The 1956 wheelbase increased from 115 to 18 inches, but the ’1957 cars were a fraction of an inch shorter. The only other increase was the 1957 being almost four inches wider – partially due to those heavy chrome bumpers. The advertising shouted “Suddenly it’s 1960!” − and it wasn’t wrong.

Under the surface all Chryslers switched to torsion bar front suspension. Although hardly trendsetting – Packard had been doing it for several years, Volkswagen for decades – torsion bars provided significant ride and handling improvements. Chrysler’s reason was largely to allow their cars to be styled much lower – the brief was to make them under 5 ft high. Motor Life magazine explained: “ It will allow owners to have more control over the front-end height of their cars − using a simple wrench they will be able to compensate for extra heights and sagging caused by age.” Thousands of customisers, always looking for easy ways to lower their vehicles, took note.

Plymouth called it Torsion-Aire Ride. There was no air involved, but GM was about to launch an airbag suspension and Plymouth wanted rights to that name. Also new, were redesigned rear ‘Levelizer Springs’ with short, stiff leaves in front of the ax le and long, soft ones behind. It reduced squat under acceleration and improved stability. All models had four springs per side, but wagons − 14% of production for 1957 − and cars with heavy-duty suspension, got six.

While the convertibles and hardtops looked great, four-door sedans were compromised by their higher rooflines. Even the wagons, with their forward-facing tailfins, appeared sleeker than sedans. Under the centre part of every front bumper was an ungainly vertically slotted underpan, whose appearance drew dealer and customer complaints. Being painted aluminium drew further attention to it. By mid-January 1958 the pan had its six vertical slots divided with a thin vertical bar. An optional bumper guard also helped hide it.

Worse still, while Plymouth’s aluminium grilles remained rust-free, the rest of the car didn’t. With hindsight, the optional underseal treatment offered by dealers was the best investment you could make if you intended to keep your Plymouth more than a year or two. Plymouth’s floors and bodywork often rotted through and there are even tales of trim falling off in the showroom. The often shoddy build quality was due to production being rushed to keep up with the huge demand for the beautiful new cars. The American-built 1957 Plymouths came from one of three factories: Los Angeles, Detroit or Evansville, Indiana. Production for the calendar year was 655,526, of which 67,268 were Belvedere coupes – helping Plymouth from fourth to third place in sales.

Speed Age magazine pushed one powering a ‘1957 Belvedere sedan with pushbutton three-speed up to 60 mph in 9.74 seconds, describing its cornering as “like a well-handling race car”, something Nick might not strictly agree with. “The ride feels harder than I expected,” admits Nick. “It might be that the bushes need replacing. You always read in period road tests about these Chryslers having excellent handling, but I haven’t noticed. Don’t get me wrong, it’s certainly not terrible to drive, it’s just not stunningly better than anything else. You can tell it’s one of the cheaper cars of the 1950s. If I get into it after driving the Cadillac, the Plymouth feels a bit cheap and tinny.

“In spite of that, I do love it. It’s rare and one of those cars you have to buy if it’s for sale. It’s been a great car to own and I still feel it’s the best-looking Chrysler ever made.”

Headlamp opening was designed in anticipation of quad headlamps. Rearview mirror is dash-mounted. Plymouth fabric interior. Power steering’ s recommended! Dash ‘floats’ above the wheel. 215bhp 301cu in V8. Plymouth’s fins were ape d by many other manufacturers. Belvedere was top of the line for ’1957.