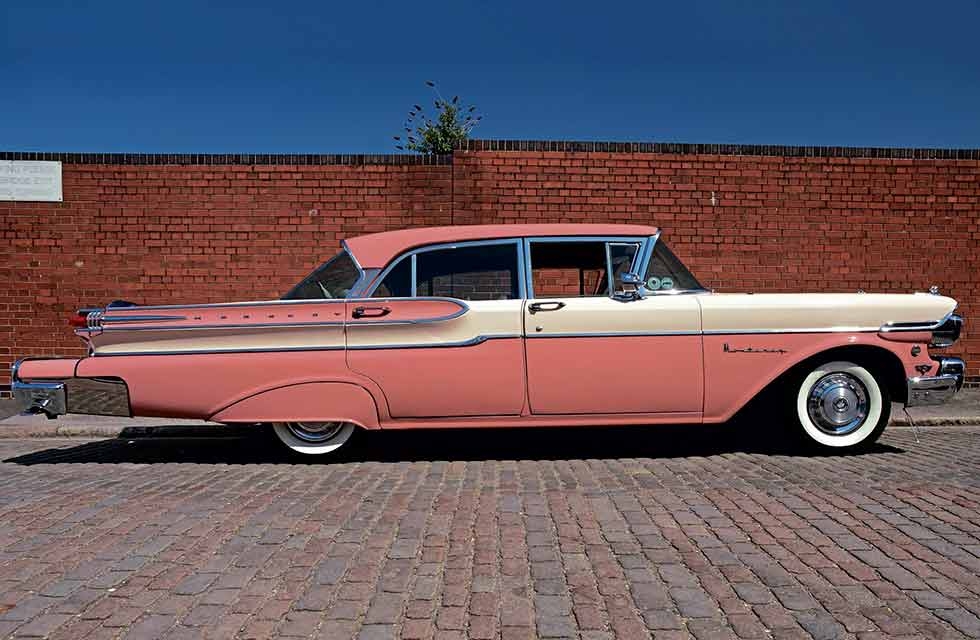 Magical Mercury. Ken Staples’ 1957 Mercury Monterey might look like it’s a 1958 model from the headlamps… but there’s a story behind that, as Jon Cass explains… Words and photography: Jon Cass.

We first spotted this stunning ’57 Mercury Monterey belonging to Ken Staples at a predominantly VW-based show earlier in the year. Among the hordes of air-cooled Beetles and campers, along with an array of modified water-cooled VAG cars, nestled a small collection of Fifties and Sixties American classics, kindly invited by the show’s organiser. To say Ken’s Monterey stood out in a very large crowd is something of an understatement – its sheer dominating size, striking colour and cleverly executed styling cues really made this car one of the real stars of the show for us.

It was those same stunning looks which appealed to Ken too, especially with it being the rarer four-door hardtop variant: “I just loved the shape and the colour scheme. The ‘57 Mercury is a work of art,” he smiles. Ken had been searching for the right car for more than two years on various websites both in the UK and in the States. “This one caught my eye in a private ad in California,” he recalls. “After a few phone calls to the vendor with nothing said that would put me off, I decided to take things further.”

Wisely, Ken had an independent engineer’s report carried out on the Monterey and, for a 61-year-old car, all was deemed to be well and good. With only two owners from new, the last being 91-year-old Gerald G Dahlen, the ’57 had been meticulously maintained and cherished throughout its life. “It appeared he’d reached the age where he’d had to give up driving and so reluctantly put up the car for sale,” Ken adds. “He was pleased it would be going to a good home, though.”

We should point out Ken has owned an immaculate 1959 Ford Zodiac for the past 32 years, proving he knows full well how to keep an old car in top condition. The Zodiac ownership dates back to the Eighties when Ken specialised in buying and selling Fifties and Sixties cars for a living, an occupation many car fanatics would love to undertake now, no doubt.

“MOST PEOPLE SMILE OR WAVE AS I DRIVE PAST!”

Once all the paperwork had been sorted, the Monterey was imported to the UK from West Covina, not far from Los Angeles, in California, and, as expected, Ken was more than happy with his new purchase, despite the unavoidable lengthy wait. Although the car was fit to drive once all the documents had been sorted, Ken opted to make a few subtle period alterations first. “I had a continental kit imported from Canada (www.continentalkit.com) which allows the spare wheel to sit on the rear of the car, providing more room in the trunk,” Ken points out. “It was a popular addition when the car was new, so I felt it didn’t detract from the originality, and I fitted it myself in the UK.” Not only does the continental kit look the part, it also has clever, hinged access to the trunk, which often raises a few smiles to those not in the know.

Another subtler change made by Ken was the fitment of quad headlamps from the updated ’58 model as opposed to retaining the original single lenses of the ’57. “I preferred the look of the quad lamps and both model years were outwardly very similar.” No doubt that alteration must spark many debates among American car fans about precisely what year the car is, as dual headlamps were only made legal in many states from 1958.

Although the Monterey badge had been around since 1939, it had taken a few years to catch the buying public’s attention. The 1950 model line-up highlights were a high end two-door Monterey coupe not dissimilar to the Ford Crestliner, Lincoln Lido and Cosmopolitan Capri coupe. GM had recently introduced their own successful range of similarly sized and priced coupes and Ford were keen for a share of the market. Initially, the Monterey came lavishly trimmed with leather seats, mock leather headlining, wool carpets, plus chrome-plated interior mouldings and a two-tone dashboard.

Despite the Monterey being a nice place to be, few were sold early on. Undeterred by low sales, the 1952 redesign included styling benefiting from a larger glass area which provided a lighter and airier cabin. A new powerplant was introduced in 1954 in the shape of a 161bhp 256cu in OHV Ford Y-block V8.

A year later, the Montclair name was introduced and now became Mercury’s flagship model, though the Monterey would once again see a redesign that year, pushing the typical Fifties styling boundaries even further with acres of chrome and more pronounced curves. Optional available power under the hood increased to just shy of 200bhp by using the 292cu in Y block from Ford’s Thunderbird. Independent ball joint front suspension now featured, along with larger brakes to handle that extra power.

In 1957, the year of Ken’s Mercury, there were yet more dramatic changes, the most obvious being the significant increase in size − this is a big car by any standards. Based around an exclusive 122-inch wheelbase, a fresh chassis design allowed for a much lower floor, giving the impression of a longer, lower-slung car, especially combined with that huge rear overhang.

The styling had been brought up to date, but still managed to retain that unmistakable Monterey look, while 1958 would see the addition of a 383cu in V8. The Monterey continued in production in various contemporary guises until 1975, regaining its top Mercury model status for part of its latter years, but the ’1957/’1958 design is arguably among the most desirable of them all.

Ken feels the ’1957-’1958 models are the pick of the range too, and his example has been fitted with a contemporary 368cu in, 6.0-litre Lincoln Y block with a very useful 290bhp under the hood, mated to Merc-o-matic transmission. This makes for a highly relaxed and refined drive which Ken is more than happy to make the most of whenever he can, adding to the unbelievably low-mileage of 47,000 on the odometer. Inside, the Monterey is luxurious enough with its two-tone brown seats, deep carpets and padded dash, but lacks many of the power-assisted extras we associate with big chrome barges of this era.

As Ken points out: “At least there’s less to go wrong!” It’s the car’s bodywork which Ken really has an admiration for: the rose-pink and beige, two-tone paintwork combined with acres of chrome make this Fifties icon stand out wherever he takes it. “I try and get to as many shows and meets as I possibly can,” he smiles, “and all my classic car mates love the car too. In fact, most people smile or wave as I drive past!” Maybe we shouldn’t be surprised… as Ken says, after all, it is a motoring work of art.

Owner Ken Staples loves the colour scheme… and so do we! Dash is colour-co-ordinated. Padded dash is a concession to safety. Clever conti kit lifts out of way. Engine is a 368cu in Lincoln Y block motor.

“THIS IS A BIG CAR BY ANY STANDARDS.”