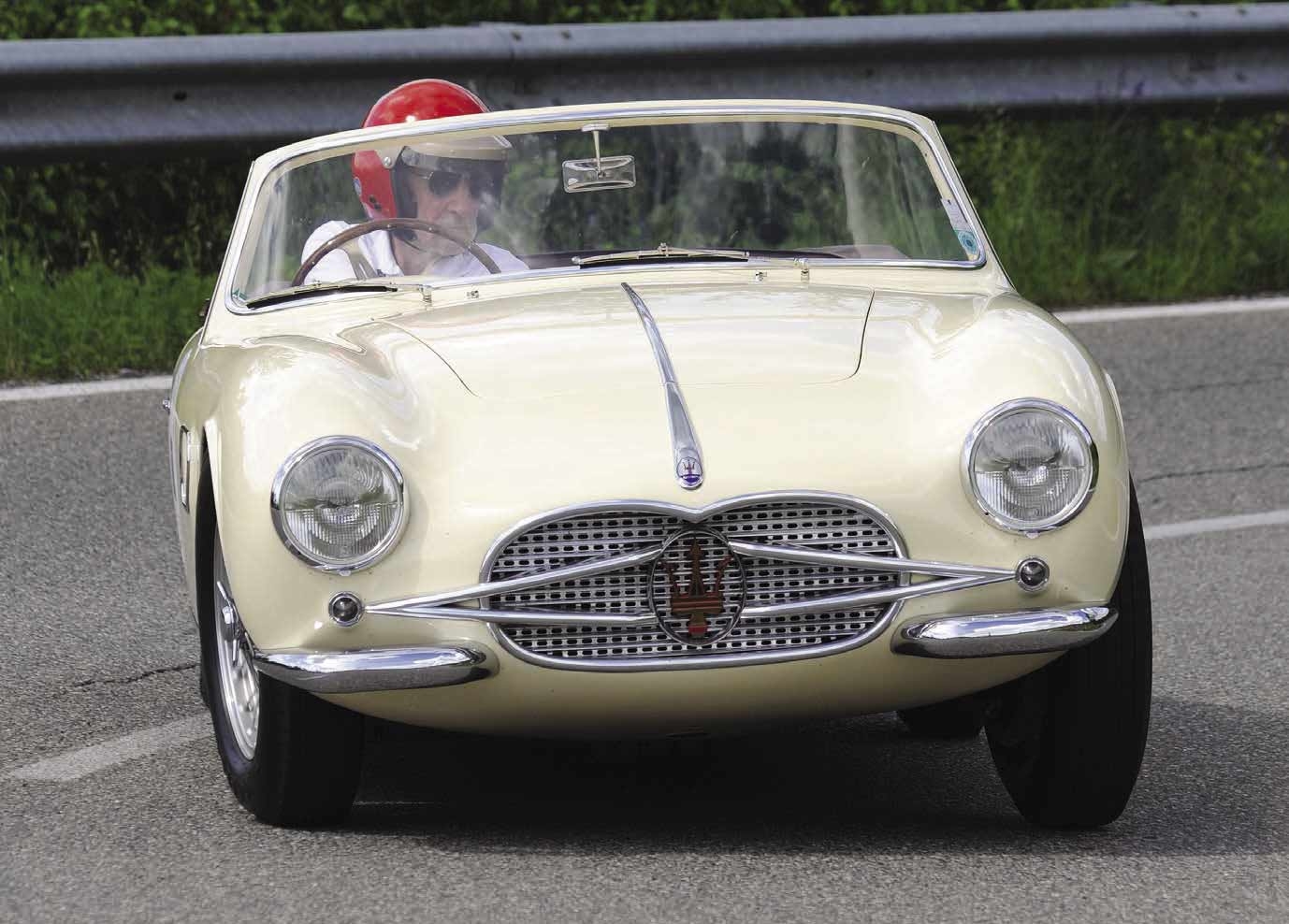 Maserati 150 GT Cosi Fantuzzi. Mystery prototype. Story of a little-known prototype racer. The extraordinary story of this Fantuzzi-bodied Maserati 150 GT Spider contains a hidden history: it was also a Mille Miglia racer and a prototype for the 300S. Story by Phil Ward & Chris Rees. Photography by Michael Ward and Gooding & Co.

Exactly what to call this Fantuzzi-bodied Maserati is a rather difficult task, which is probably why its complete provenance has taken most of its 61-year life to establish. Only over the last few years have experts been able to piece together the story of how a works racing Maserati became a factory prototype and then a coach-built one-off road car.

Let’s call it ‘Maserati 150 GT Spider’. With chassis and engine number 003, it was constructed in 1957 but its origins actually stretch several years further back than this, and it might equally correctly be referred to as a Maserati A6GCS or indeed a 300S prototype.

Of all the cars built by Maserati during the 1950s, the one-of-a-kind 150 GT Spider has proved to be one of the most enigmatic. Unknown even to many expert enthusiasts, this dual-purpose sports car has remained something of a mystery for many years, with an elusive history.

David Brynan, a specialist with Gooding and Co (the auctioneers), said it started out as a Maserati A6GCS/53, one of 52 such cars fitted with a double overhead-camshaft 170hp 2.0-litre straight-six engine, which Maserati only built from 1953 to 1955. This particular car is one of a handful that Maserati’s own works team raced during 1954.

In May 1954, Maserati provided celebrated works driver Luigi Musso with a brand new A6GCS for the Mille Miglia. Significantly, Musso’s new A6GCS was christened with chassis number 2043, the same identity as the car that he raced throughout the 1953 season. Not that this was unusual: Maserati ‘repurposed’ several competition chassis in its early years.

Piloted by Musso and Zocca, the ‘new’ 2043 departed from Brescia and, after an epic 12-hour battle with Vittorio Marzotto’s Ferrari 500 Mondial, finished the 1000-mile race in third overall and second in class. Musso’s podium finish in the 2.0-litre A6GCS represented Maserati’s best result thus far in the Mille Miglia.

In June 1954, Musso campaigned 2043 at the Gran Premio Supercortemaggiore at Monza, now fitted with a detuned 250F engine. He retired in both this race and his last in this car, the Grand Prix Pietro Cidonio. After this, Musso switched to a new A6GCS MkII and 2043 was handed over to Sergio Mantovani for the Coppa d’Oro delle Dolomiti.

Still equipped with its 250F engine, the A6GCS won overall, defeating Cabianca’s OSCA MT4 and Gerini’s Ferrari 250. For the latter part of the 1954 season, Valenzano was entrusted with 2043, notably achieving an outright win at Borzonasca-La Squazza.

After this final outing, 2043 seemingly disappeared from sight. But the well-used works A6GCS simply found a new role. Maserati’s racing department stripped 2043 back to its chassis. Why? Because it needed a prototype for the 300S, so it simply repurposed 2043 using Maserati’s 3.0-litre straight-six engine. The intention was develop a new model to contest the World Sportscar Championship. Maserati’s 2.0-litre offerings stood little chance against the might of Ferrari, Jaguar, Mercedes-Benz and Aston Martin. Maserati’s 300S would be a sports car that combined the balance of the A6GCS with the power of its 250F Grand Prix car.

The very first development car was entered in the 1954 Mille Miglia, where Mantovani was forced to retire. A new prototype chassis was then built: a strengthened version of the 150S/200S spaceframe but this entered only one race – the 1954 Gran Premio Supercortemaggiore at Monza – before being used to test six-cylinder engines. The third stage was the official 300S prototype, internally designated 003 – and this is the car that was based on chassis 2043.

It featured an advanced transaxle and showed great promise, but retained the A6GCS chassis which, albeit developed, ultimately proved inadequate, so extensive chassis revisions were undertaken. In December 1954, Jean Behra performed the final tests on 003 and, soon after, Maserati began gearing up for 300S production. No longer having any use for 003, the racing department stripped the prototype of its mechanical components and coachwork (the 300S prototype body would eventually be mounted on A6GCS chassis 2099). 003 was converted from right-hand to left-hand drive but was left at the racing department for some 18 months before Maserati found yet another use for it.

At about this time, Maserati was developing the 150S, a smaller sports car to replace its A6G/2000, with a 1.5-litre four-cylinder engine. Maserati’s racing department once again used the A6GCS-cum-300S chassis, revising it to accept a full-race 150S engine, an A6G/2000 gearbox casing, a 200S propshaft and an A6GCS rear end assembly. While the front suspension remained virtually unchanged from A6GCS spec, the front brakes were sourced from a 250F, and the steering combined both 250F and A6G/2000 components. Other interesting features included a 200S radiator, A6GCS rear brakes, a 150S oil pump, and a new wet-sump lubrication system better suited for road use.

To clothe the chassis, Maserati turned to Medardo Fantuzzi of Carrozzeria Fantuzzi, its preferred coachbuilder for sports racing and grand prix cars. It was Fantuzzi who had been responsible for the designs of both the A6GCS/53 and the 300S. For the 150 GT Spider, he created a open-topped body in lightweight aluminium, which bore similarities to Frua’s A6G/2000 Spiders. While Pietro Frua has been given credit for the 150 GT design, it is highly probable that Carrozzeria Fantuzzi simply developed its own body for the car that drew inspiration from Frua.

Finished in Avorio (ivory) with Marrone (brown) upholstery, the 150 GT Spider maintained the right-hand-drive configuration of the 300S prototype and had a full convertible top and roll-up windows.

Sadly, the car’s complex specification was its undoing. Maserati judged it too expensive to build in series. The 150 GT prototype was deemed unviable and Maserati management decided to move on to a new project, the 3500 GT. As late as July 1959, one motoring journal reported: “The 1500cc Grand Turismo has been pulled out from under the dust sheets and given two days of testing on the autodrome and in the mountains. The Orsis still hope that eventually they will have this car in mass production.”

That never happened, and the 150 GT Spider remained squirrelled away out of the public eye in the factory’s racing department. A factory record dated 31 October 1959 confirms the 150 GT Spider’s status: “Unique example – Prototype.”

The 150 GT was sold, according to delivery note dated 10 March 1960, to the newly appointed British Maserati agent, Colin Murray of Fleetwood, Lancashire. It was sold on later in 1960, now registered ‘3 CLP’. The 150 GT Spider went through several UK owners before receiving some minor restoration work in the early 1980s. It was then sold to a German collector. Its next European owner, who bought it painted red with a black interior around 2007, finally began to some serious research into its history. He found that the car’s documentation didn’t make any sense, leading him to discover the history just quoted above.

As much was confirmed by respected marque authority Adolfo Orsi, who conducted a lot of research into the history of this important Maserati. He obtained documents from the Maserati factory archives and inspected the car personally during and after its restoration.

Although the Maserati build sheet reported that the chassis was a “200S frame modified by us,” it soon became clear that this was far from the truth. According to Orsi: “We carefully examined the chassis and, comparing its characteristics to other Maserati cars, we arrived at the conclusion that its chassis was built originally for use as the basis of an experimental sports car which, during its development, was modified several times. Then it was set aside for a time and it was modified one last time to become the basis of a new prototype for a new experimental 1500 GT car.”

Over a three-year period in its latest owner’s hands, the car was meticulously restored and returned to its original cream colour with a brown interior. The Fantuzzi coachwork was painstakingly refinished – for instance, four new bumpers were fashioned using wooden bucks to the original specifications, while the front grille (which had been modified over the years) was returned to its original ‘moustache’ spec using archive photographs.

The mechanical restoration was undertaken by Steve Hart Racing. The engine was rebuilt to full competition specification and bored out to 2.0 litres to make it more driveable. The A6G/2000 gearbox, meanwhile, was sent to Corrado Patella in Italy for overhaul. All five Borrani wire wheels were refurbished and mounted with period-correct Blockley racing tyres.

This one-of-a-kind Maserati 150 GT was then auctioned by Gooding & Co in 2013, when it fetched over three million dollars. It is now in the ownership of a discerning Austrian collector called Andreas Mohringer.

Auto Italia caught up with the Maserati 150 GT when it made a surprise entry – and a very pleasant one – at the 2016 Silver Flag hillclimb. The Club Piacentino Auto d’Epoca (CPAE) event, famous for attracting rare and interesting Italian cars, is described by organiser Claudio Casali as a “dynamic concours” and it certainly provided the perfect scenario for the 150 GT Spider to be seen in action.

BRAKES: Hydraulic drums all round

Unique 150 GT Spider was a surprise entrant at the Silver Flag hillclimb in 2016; it sounded fantastic.