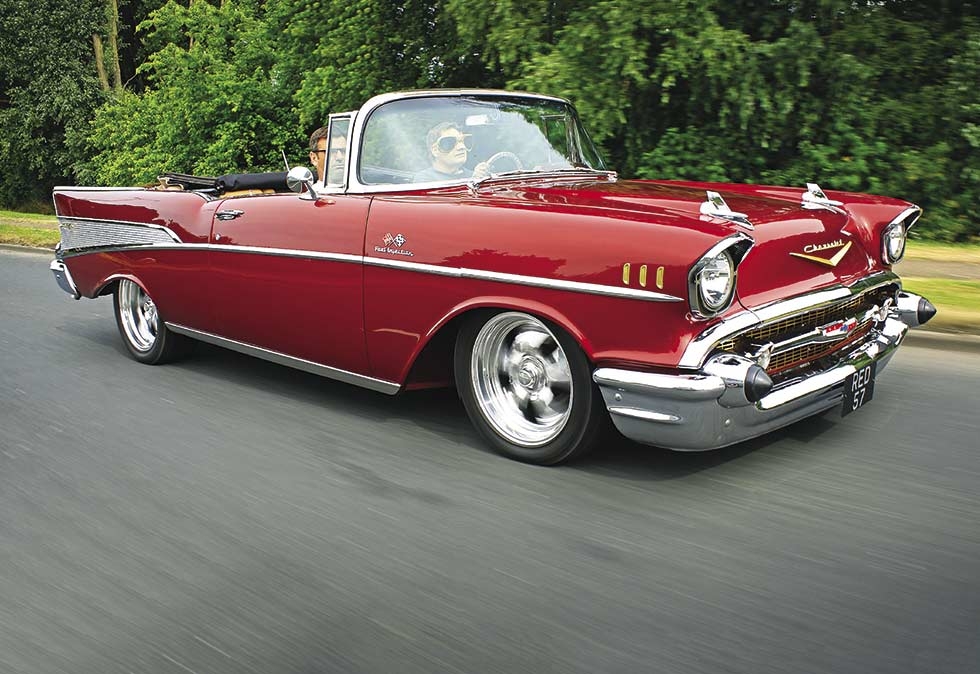 Top of the Tri-Chevy wish list for all shoebox fans must be the ‘1957 convertible, especially one that’s been modded and trimmed like this beauty. Words by Dave Smith. Photography Jon Hill.

Just Pass in’ Through

Tri-Chevys have never been more popular with UK enthusiasts, but while there is every shape and style of ‘1955-1957 over here, the one that remains most elusive is the convertible.

It’s hardly surprising – they were rare when new, and command strong money in their homeland, so I reckon that if all the Tri-Chevy ragtop owners in the UK met up for a drink, they could share a minicab home with room to spare. I was delighted to hear that this LS-powered sweetheart had made it across the water, but, as it turns out, it was just visiting…

The owner is a guy who’s been part of the scene for decades: Larry Ward. He’s owned some amazing machinery over the years, so he knows a thing or two about picking a winner. “It was built in Alabama by Shannon Walters,” says Larry. “Shannon is a well-known trimmer in the States, he runs Interiors By Shannon, which is right up there with the likes of Dave Lopez.

Shannon and his dad, Ronnie, are both big Tri-Chevy guys, and they built this car between them for Ronnie. They built it six or seven years ago, but Ronnie didn’t keep it long before selling it on; apparently he rarely keeps anything long.

“It’s a genuine ‘57 Bel Air convertible, a V8 car, but extensively modifi­ed, and all the interior trim is custom, nothing is as it le‑ the factory. Ronnie used it for a while, and then my friend John Hendy spotted it on eBay. He bid a lot of money on it, but asked a mate of his over in the States to go and inspect it. He ended up buying it, then shipped it to the UK, but for reasons best known to John, he never used it.

“A­fter a while, John told me about it, I went to look at it, and bought it straight away. That was about four years ago, but I’ve hardly got to use it myself. One big trip I did take was with a bunch of mates to the Power Big Meet in Sweden, where I entered the ‘57 in the Custom class, and won ‑ first place! That’s a really big deal, when you see the quality of the cars at the Big Meet. Three of us entered classes – myself, Chris’s GTO and Al’s Volvo – and we came away with two ‑ first places and a second. That’s pretty damn good! That evening, we all got invited along to the local illegal street races, so it was a good day. “Other than that, I haven’t been able to use it much. It was just sitting there, so I put it up for sale. I had it up on US eBay, and had no takers, but a­fter the listing had run out, I was contacted by a fella called Tobias who told me to put the listing back up and he’d ‘Buy It Now’ at full price. He did! Before he bought it, I told him he’d have to wait a month so I could get the private plate put on retention, and he said no problem, just send it when you’re ready… he was really easy going! Instead of me chasing payment, I had to chase him to ‑ find out where he wanted it sending!”

At the time of writing, the car is on the water on its way back to California; it should have arrived by the time you read this. It’s a shame that such a beautiful machine should have to leave the UK to ‑ find a buyer, but don’t worry; I’m damn sure Larry will have something special up his sleeve, especially with cash burning his pockets…

Disc brakes all round

Power windows all round

Full one-o‑custom interior by Interiors by Shannon, in two-tone

Big-inch (but not too big) Billet Specialties wheels. When the body’s this beautiful, why draw focus away? Well yes, this is true… … but it’s not the old mechanical Bendix unit; it’s a very 21st century LS1 lump from a Corvette.

The ‘57 convertible is a beautiful beast to begin with, but a bit of lowering, a bit of rake and that glorious paint means it’s unbeatable. All mod cons, including power steering and air conditioning, and all gleaming. Wilwood anchorage, and discs all round. No junk in this trunk. This is Larry being an ambassador for the UK at Power Big Meet…

Stunningly gorgeous interior uses little, if anything, from the stock ‘57. Would you expect anything less from one of America’s best trimmers? … while here in the UK he has to wear those shades to remain inconspicuous.