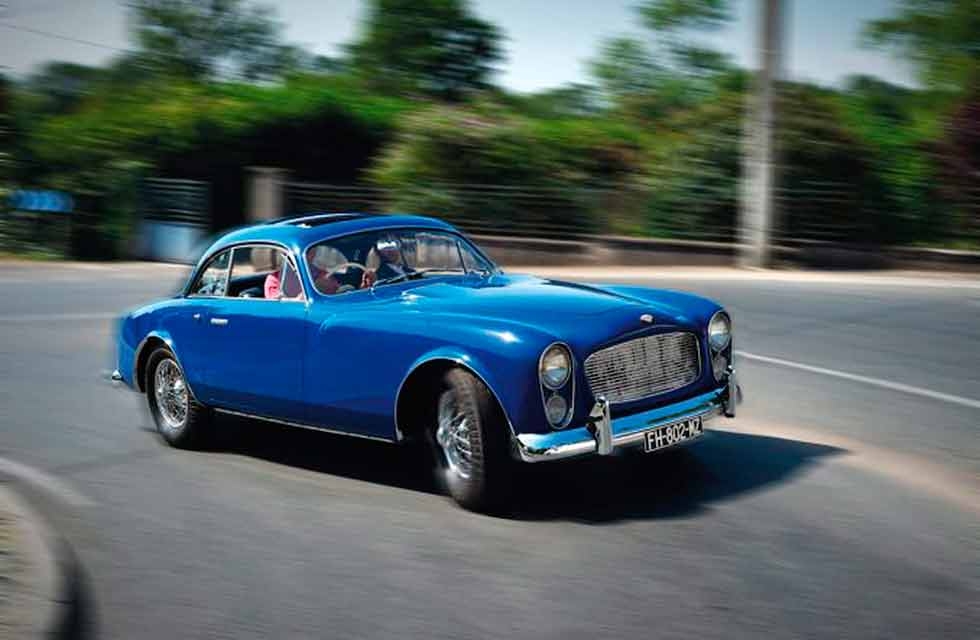 Within the suburbs of Tours lies a plainlooking building that’s well known to lovers of automotive history. Behind its anonymous façade you’ll find 3ADT, DominiqueTessier’s specialist workshop – and at the time of our visit a 1953 Delahaye 135 MS CL Spéciale Faget-Varnet is concealed within. A few months earlier, a telephone call and a selection of emailed photographs had piqued our curiosity about this one-off Delahaye that, while it never really disappeared, had never had its remarkable story told – until now.

For that we must thank the diligence of historian Wilfrid Leroy-Prost, who trawled through the archives to gain a fuller understanding of a car whose history owes much to three automotive icons that made their mark on the industry during the 20th century: Delahaye, Facel Vega and Faget-Varnet.

The least well known of the trio, Faget-Varnet, was one of the many coachbuilders that were once scattered across France and grew out of a collaboration between Jean Faget and Henri Varnet. Based in Levallois, close to Paris, the firm produced bodies for military and industrial vehicles, as well as coaches, and worked as a subcontractor for Citroën, Panhard, Willème and Bernard. Faget-Varnet’s secret weapon was the invention, in around 1948, of an all-metal frame made from 1010 sheet steel. This spark of creativity enabled it to move on from using wooden structures, which helped accelerate productivity and thus saved a considerable amount of money. By transferring its military industrial processes to road cars, Faget-Varnet provided a glimpse into the future world of monocoque bodies. The box-type frame could be adapted with equal ease to cabriolets or coupés, and Faget-Varnet produced a number of bespoke bodies for Delahaye – estimates suggest six 135 cabriolets between 1948 and 1951, five 135 coupés between 1948 and 1953, plus a solitary 235 coupé in 1951.

‘The Spéciale was a foretaste of the Facel Vega HK500: the structures of the underbody, doors, boot and bonnet are all but identical’

A symbol of French luxury car manufacture, Delahaye had enjoyed a golden period during the ’30s thanks to a technical revolution in its chassis development and the adoption of independent front suspension on the 134 and 138 Super Luxe models. Delahaye’s chassis were clothed by some of most celebrated coachbuilders of the age, from Letourneur et Marchand to Chapron via Franay, Saoutchik, deVillars and Figoni et Falaschi.

The uncontested star of the 1936 Paris Salon was the company’s short-wheelbase (2700mm) Figoni et Falaschi roadster, inspired by one of the famous illustrator Géo Ham’s drawings. It combined exquisite styling with a stratospheric price-tag and was purchased by the Aga Khan.

By the time of the Faget-Varnet project, however, Delahaye was approaching the end of the road in the slipstream of numerous flops, including the Type 175 introduced at the 1947 Paris Salon, the technically outclassed Type 135 and the marque’s swansong, the Type 235 that appeared just before Delahaye was taken over by Hotchkiss on 29 July 1954.

It was with one eye on the 1953 Paris show that Faget-Varnet commenced construction of the prototype that sits before us today. As a basis it took a complete 1949 Delahaye 135 MS chassis (801029) and engine assembly, mated to a Cotal MK35 electromagnetic transmission. For the coachwork, Faget-Varnet contacted Facel in order to obtain a stock of body panels that had been used to produce the Ford Comète – and that’s where Facel Vega enters the script.

In the early ’50s, Facel Vega did not yet exist. Facel (Forges et Ateliers de Construction d’Eure-et-Loir) was founded in 1939 by Jean Daninos, who two years earlier had also launched another business, Métallon.

A specialist in the field of light alloys and stainless steel, Daninos produced parts for the American aviation industry during the Second World War. In 1945 he merged Facel and Métallon, the new enterprise working across the automobile and aerospace industries and undertaking contract work for Simca, Delahaye and, particularly, Ford when the latter’s French arm introduced the Comète in 1951. The design of this 2+2 V8 coupé was completed halfway through 1950 by Daninos, Farina and Brasseur.

The roof’s flowing shape was identical to that of the unique Bentley Cresta II, which Daninos was in the process of creating to use as his personal transport. With this distinctive roof, wide ‘chipcutter’ grille, integrated two-tier headlights and sculpted bonnet incorporating an air intake, the range-topping Comète Monte-Carlo provided a taste of things to come when the Facel Vega was launched during the summer of ’1954.

Faget-Varnet took the elements Facel had used on the Comète, modified them during construction of the 135 MS CL Spéciale prototype and added a few of its own stylistic flourishes, the most obvious being the chrome headlight surrounds that were to become something of a FacelVega signature. The upper section of the front wings was broadened slightly just below the windscreen pillars, and the wheelarches were also made a touch wider.

It was a style redolent of Zagato’s sporting designs, and foretold some of the refinements of the Facel… a full seven years before it was launched. The bonnet was redesigned, with two vents positioned ahead of the windscreen to accelerate the flow of hot air from the engine bay.The door profileswere also carefully shaped and contoured, in a marked contrast to the straighter, more slab-sided look of the Comète.

The rear wings reprised the flared arches from the front, a detail highlighted by a chrome strip that ran the full length of the car’s flanks (although it is barely perceptible between the wheels). The roof was lighter than the threepiece original, helped by the fully panoramic rear screen. Last but by no means least, a significant percentage of the everyday hardware – headlights, tail-lights, bumpers, wheel trims and grille – were substantially reworked.

In the cabin, the trim and dashboard were specific to this car, although the Quillery steering wheel was the same as that found on the 235 prototype of 1951. The last discernible difference was the incorporation of a so-called ‘invisible’ sunroof, a design for which the Levallois firm had sought a patent. The overall result is a car that bears only a slight familial resemblance to the Comète.

Echoes of the 235 were not limited to the Quillery wheel, because other common elements included the steering box – analysis of the underpinnings suggests very clearly that this bodywork had been prepared for mounting on a 235 chassis. That theory is strengthened by the presence of Delage hydraulic brakes, something too modern to have been seen on any 135.

The 235 – and Delahaye – soon met its fate, but that was far from the end of the story for this prototype. It proved to be a foretaste of the Facel Vega HK500 introduced in 1958. Indeed, the structure of the underbody, doors, boot and bonnet (all the way to its hinges) of this car are all but identical to the production Facel. The same applies to the shape of the roof, along with the design of the engine bay and firewall.

For some unknown reason, however – and none of those involved with the original project are still alive – the Delahaye 135M CL Spéciale prototype would never make its scheduled appearance at the 1953 Paris Salon. Instead, it remained in the hands of Jean Faget, as a final testament to the artistry of the Levallois coachbuilder that closed its doors in 1954, shortly before Delahaye did the same. Comète production ended at about the same time and Facel Vega would in turn fold a decade later, the end of the line for the three companies that had played a role in the creation of this prototype.

Some years later, Faget donated the car to industrial designer Philippe Charbonneaux – and handed over a second body, fully built but without a chassis. Charbonneaux placed the former in his car museum at Villiersen- Lieu, in north-eastern France, alongside the Delahaye 235 prototype with which he’d been involved. It wasn’t until 1981 that the CL Spéciale changed hands again after being bought by Club Delahaye member Georges Claverie, who became the first person to actually drive it!

After a number of adjustments and alterations, the prototype was presented to the road traffic authorities later that same year, almost three decades after its creation, and on 31 July it was given the registration 6197 RQ 27: for the first time, it could now legally be used on the road.

Nevertheless, it had covered fewer than 10,000km when present owner Anthony Collé bought the Spéciale at auction in November 2017. “It was completely by chance that I came across the car,” he says. “I saw a newspaper ad and was seduced by the Delahaye’s very mysterious background story.” But with its genuine historical significance, this machine deserved more than to just sit in a garage; the decision was made to commission a comprehensive restoration so the Delahaye could be exhibited at shows and concours d’élégance. The job was entrusted to Tessier in April 2018 and it took his craftsmen, engine builders and trimmers 2000 hours to return the car to the condition in which we see it today.

It’s a privilege to climb aboard the Faget-Varnet Delahaye on its first post-restoration road trip. A degree of suppleness is required to squeeze into this 2+2, but the ambience is sublime – helped in no small part by the two-tone leather trim. The 3.6-litre overhead-valve straight-six purrs, the Cotal transmission picks out ratios seamlessly, and only the Delage hydraulic brakes still require a bit of fine-tuning.

After a short run, it’s back toTessier and his team for some final fettling before the car heads off for its first major event – and not just any event, either. “I couldn’t believe it,” says Collé. “Being invited to Pebble Beach seemed unreal to me.” A nice surprise, for sure, but also deserved recognition for a fabulous restoration.

Stacked headlights would become a Facel Vega signature. The ‘invisible’ sunroof was the subject of a special Faget-Varnet patent Restored triple-carb 135M engine. Above right: Quillery wheel and two-tone leather are true to the original design. Spare 17in wire wheel is mounted in a hinged carrier that folds back to provide access the luggage bay and neatly finished fuel-filler door. Clockwise: bonnet vents extract hot air from the engine; fully panoramic rear window, unlike the three-part item in the Ford Comète; Faget-Varnet plaque.