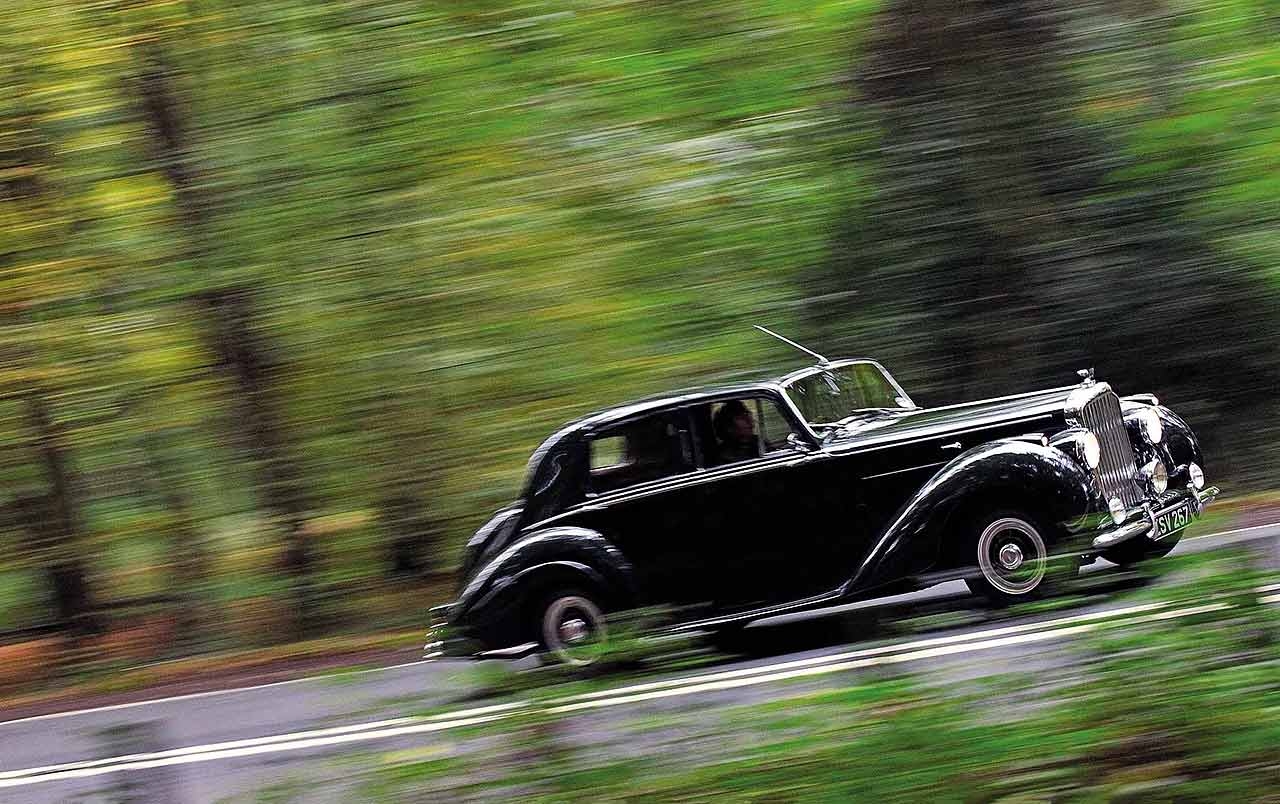 You know how occasionally you meet an upper-crust English girl with a cut-glass accent? One who initially appears a bit plain but has a real glint in her eye. You look more closely and notice she is rather well put together. Then she casually drops into the conversation that she is actually a champion point-to-point horse racer, a parachutist or has a Ducati 888 that she enjoys on early-morning runs. Naughty but nice.

This immaculate 1953 Bentley R-Type Sports Saloon is a British motor car. In fact it is a frightfully English motor car, one designed for the sporting driver – chap or gel – and not as a chauffeur’s conveyance. It’s elegant, conservative and, er, rather well put together, but there is more to it than initial impressions might suggest.

WO Bentley built big, rumbustious, race-winning machines. Unfortunately his company went bankrupt in 1930 and was bought by Rolls-Royce. Messrs Rolls and Royce built quiet, refined, genteel motor vehicles for the aristocracy. The Royce crowd, run by Ernest Walter Hives at the time, probably found the Bentley Boys a bit of a loud lot, what with a South African mining magnate (trade, dear boy) mixing with a pilot, a doctor and even a well-heeled motoring journalist – whatever happened to them! – and a racing driver funded by a wealthy racehorse owner named Dorothy.

Come the Great Depression, the diamond miner pulled the plug and Bentley Motors Ltd went to the wall in 1931. Napier & Son was in negotiations with the receiver to buy Bentley but another company – called the British Central Equitable Trust but actually a front for Rolls-Royce Ltd – offered a counter-proposal and outbid Napier in a sealed bid auction, with its offer of £125,000.

Hives was an aeronautical engineer responsible for the sophisticated Merlin engine in the Spitfire so he probably looked down on Walter Owen Bentley, a railway engineer. Rolls-Royce dealt ruthlessly with Bentley, who was not allowed to design anything once Royce had taken over his company, and he left for Lagonda in 1935.

This history is important because Bentley Motor Cars became, in essence, Rolls-Royce sporting cars from 1933 onwards, when the Royce 20/25 was spruced up as the Bentley 3½-litre, built at the Derby Works. This was the age of the ‘Silent Sports Car’. The Standard Steel MkVI arrived as a complete ready-to-drive saloon car in 1946 and this R-Type Sports Saloon was first launched in 1952, along with the extremely upmarket two-door Bentley Continental Sports Saloon, with almost exactly the same mechanicals clothed in lighter coachwork, usually by HJ Mulliner of London. Abadge-engineered Rolls-Royce.

Today, the 200 or so surviving examples of the Bentley Continental are worth in excess of half-a-million pounds each. On the other hand, this slightly less rakish, 180kg heavier four-door Bentley R-Type Sports Saloon, one of 2486 produced, is worth about £60,000. That’s quite a saving, and they were extremely well made so a number have survived. As with most classics, rust is the enemy and, as with many saloon cars, a good number ended up in the scrapyard. But Bentley R-Types have always been loved. Initially bought by comfortably well-off owner/drivers, garaged examples have been looked after by keen Bentley Drivers Club members for years and they keep purring along discreetly.

This immaculate, fully restored Brewster green R-Type looks absolutely perfect. Its deep green paintwork is the ideal hue, set off by the toffee brown leather trim and just enough chrome to prevent it from looking drab. The rounded grille is so much more subtle than the square Rolls-Royce job on its equivalent Silver Dawn – tempting some Bentley drivers to refer to Royces as flat-fronted funeral followers’.

The Bentley sits on fresh Avon Turbosteel tyres and the odometer indicates just 65,525 miles, which seems plausible. Shutlines are razor thin and the doors close with a tight clunk. The interior is beautifully assembled, with ashtrays seemingly everywhere. The detailing is a delight and everything is meticulously constructed.

The previous owner, a fastidious German gentleman, wanted a car with a pre-war feel but one that runs like a classic and the R-Type fits the bill perfectly. From the upright driving seat (modern safety belts discreetly fitted), the view through the windscreen is down a long and narrow bonnet, over the proud flying B mascot, with the sidelights atop each wing acting as neat guides. Indeed, the R-Type looks pre-war, so how does it run?

It does without the need for an ignition key but a small one is on the fob for the Yale door locks. Turn the heavy chromed switch mounted in the exquisite walnut veneered dashboard, then thumb the starter button. Nothing. Or so it would appear. But wind the window down and you pick up a faint burble. The big six-cylinder engine is virtually silent. On top of that it is completely isolated from the interior, exhibiting nary a vibration nor a shudder.

The diminutive clutch pedal goes to the floor with the lightest of touches and the gearlever is to be found on your right-hand side between the seat and the door. Click it into non-synchro first gear, add a bit of downward pressure on the throttle pedal and the Bentley moves off quietly.

First gear is a surprisingly high ratio so hang onto it a while longer than you would expect in a car of the 1950s. The bolt-upright lever is a gem and requires only the lightest pressure between the gears. Housed within the steering boss is a knob that adjusts the rear suspension. Slide it to the ‘firm’ position and give the throttle pedal a proper shove.

The Bentley takes off with a whoosh. Suddenly you are charging down a quiet country road at indecent speed and having to work the undergeared worm-and-peg steering to keep the R-Type on an accurate course. Goodness, the Bentley word ‘rumbustious’ spring back into mind.

Like that upper crust gel, this fragrant Bentley has a naughty little secret. Open the split bonnet on the driver’s side and all is present and correct. Twin SU carburettors and lashings of black lacquered paint on most surfaces. But open the bonnet on the passenger side and you will be struck by the very sporting-looking banana branch exhaust manifold.

A standard R-Type Bentley Sports Saloon comes with a sweet 4566cc inline six-cylinder engine producing an ample 150bhp or so. Later Continentals received the bigger-bore 4887cc engine with 172bhp, and the replacement S1 benefited from a further developed six-port head version of this bigbore six, knocking out around 200bhp. Yes, this R-Type has the big-bore engine from an S1, which makes the grab handles on the back of each front seat very useful indeed.

On the road this Bentley is properly fast. Not only does it have the big engine, which looks exactly the same as the 4½-litre original, it also has a much higher rear axle ratio, giving it lovely long legs. The Sports Saloon is no traffic-lights racer but get it bowling along, then give it some juice and it hoovers up the horizon with proper attitude. At a cruise the car is not that quiet as some wind noise is evident, but not much more so than in a fabled million-dollar Continental. The mechanical, servo-assisted drum brakes are remarkably effective, even if the steering is slightly vague and, although this Sports Saloon weighs some 180lb more than a Conti, it will take a very, very determined driver to shake it off.

A really effective Q-car that’s charming and elegant most of the time but enormously naughty fun when pressed. Everso- gently? Don’t be quite so assured.