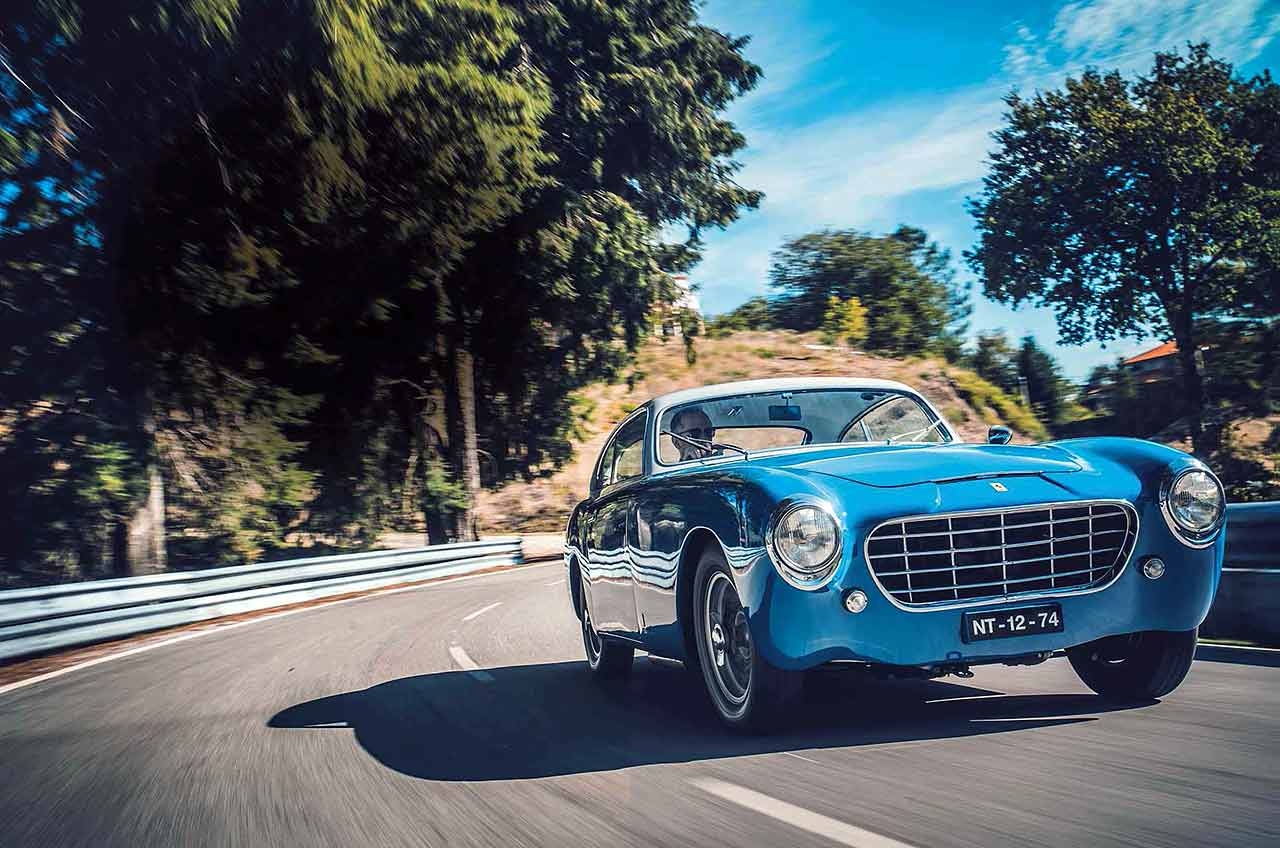 Out Of The Blue. In the early 1950s, Enzo Ferrari’s preferred coach-built der was not Pinin Farina but VignaIe. We drive a rare survivor from that period. Classic Drive 1950 Ferrari 195 Inter Vignale Richard Heseltine gets behind the wheel of one of the rarest and most handsome of early Ferraris, the Vignale-bodied 195. Words Richard Heseltine. Photography Manuel Portugal.

I’m not entirely sure what road we’re on. When you’re following a photographer and they’re on point, you never know quite where you’re going to end up, although I do know the air’s getting thin as we climb through this dry, rocky corner of northern Portugal. Eventually we find ourselves on what appears to be an ex-road, the sound of stones ricocheting off the undercarriage of the Ferrari causing me to wince, my face scrunched like an accordion. There’s nothing for it but to slow to a crawl as the camera car dashes off into the distance, a trail of dust obscuring much of the track ahead, including the potholes and some of the steeper drops. But then the sun’s rays blast through the haze and the lunar-like landscape suddenly makes way for panoramic views as far as the eye can see.

Except that one member of our party has his back to this scene of outstanding natural beauty. Our affable host, Tiago Patricio Gouveia, has seen it all before. His ancestors put down roots here centuries ago, and he would sooner elucidate every quirkily charming detail of this one-of-a-kind 1951 Ferrari 195 Inter, the car that was acquired – and brough back to life – by his grandfather Joao Lacerda in the late 1960s. It has been on display in the family’s Museu do Caramulo ever since – or at least when Tiago or his brother Salvador or one of their cousins aren’t using it. This is no trailer queen.

It is no competition tool, either. Scroll back to 1945 and Italy was a smouldering ruin, its industry and infrastructure shattered from the Alps to Sicily And it was against this backdrop that Enzo Ferrari became a car manufacturer. Having been effectively dethroned from his role as Alfa Romeo’s motorsport czar, Il Commendatore was initially barred from building a car under his own name under the terms of his severance deal. Aside from the Auto Avio Tipo 515, of which only two were made, the future motor mogul would have to wait until Milan was liberated before he was in a position to realise his car-building aspirations. Which, to Enzo, meant building racing cars. Design and development fell to fellow Alfa Romeo alumnus Gioacchino Colombo, the 125S being the first fruit of their labours.

The die was cast. By early 1948, the 125 had gained an engine displacement hike from 1496cc to 1995cc and morphed into the 166. The model would establish Ferrari in international motorsport, winning that year’s Targa Florio and Mille Miglia sports car races among others. It was at this juncture that Enzo also began making road cars, not that his heart was really in it. He viewed them as being a necessary evil. They helped fund his competition activities, after all. For most of the 1950s, road car production consisted of small-series runs, most being sold in rolling chassis form to be clothed by an outside carrozzeria.

The 166 Inter was the first true Ferrari road car, as distinct from a road-registered sports-racer. It arrived in 1949, and a year later the larger-displacement 195 broke cover at the Paris Salon de l’Automobile.

It came in two forms: the Sport with triple Webers for racing, and the Inter with just a single carb for the road. Just 27 were made before production ended in mid- 1951, and Ferrari’s couturier of choice was Alfredo Vignale.

The son of a car painter, and the fifth of seven brothers, young Alfredo Vignale was more interested in shaping metal. He took his first tentative steps into coachbuilding in 1924, embarking on an apprenticeship with Ferrero & Morandi in Piazza Enrico, Turin, when he was only 11 years old. Six years later, he caught the eye of Battista ‘Pinin’ Farina, under whom he would complete his training. Aged 24, he was then poached by Giovanni Farina – brother of Battista and owner of Stablimenti Farina – to be his workshop foreman. Nonetheless, Vignale dreamed of being his own boss. In order to make the leap and establish his own carrozzeria, he spent his evenings toiling away in his basement, making kitchen utensils and bicycle mudguards in a bid to raise the necessary funds.

The Second World War interrupted his plans, but in 1947 he received an offer he couldn’t refuse. Piero Dusio, founder of the wildly ambitious Cisitalia concern, had been trying to find someone to help turn aerodynamicist Giovanni Savonuzzi’s concept for the 202 SMM Aerodinamico Coupe into 1:1-scale reality. Other coachbuilders had baulked at the challenge due to the complexity of Savonuzzi’s brief, but Vignale relished the challenge and, on accepting the gig, was able to rent a small room in a former sawmill and establish his own business.

Before long, his small business became a moderately sized one, and the first car to be built under his own name arrived in 1947. Based on a second-hand Fiat Topolino, the pretty coupe attracted plenty of interest when displayed in a Turin car dealership. Meanwhile, Vignale began a long, fruitful relationship with fellow Stablimenti Farina old boy Giovanni Michelotti. The two friends became regular collaborators, Michelotti producing renderings that Vignale turned into three-dimensional reality

Such was Carrozzeria Vignale’s growing reputation, it soon attracted Ferrari’s attention and would go on to clothe around 150 cars between 1950 and ‘1954. The 195 Inter you see here, chassis 0103S, was the sixth car built and one of 12 examples bodied by Vignale.

It was delivered to Ferrari’s Portuguese agent, Joao Gaspar, in April 1951 and sold new to Jose Cabral, who entered it in a hillclimb in September of that year. It was the car’s sole competition outing in period. It was then acquired by Lisbon’s Hermano Areias who didn’t keep it long, the next owner being Luts de Sttau Monteiro, son of the Portuguese ambassador to London. Fast-forward a decade and the car had fallen down the food chain. The country under the Antonio Salazar regime wasn’t conducive to exotica ownership, and the car lay in a state of disrepair at the back of a Mercedes-Benz dealership in Lisbon prior to being rescued by Joao Lacerda.

Unfortunately, the Inter came without much in the way of paperwork, but Lacerda restored the car and used it extensively A box-file contains hand-written jottings recording trips to visit friends, a maintenance log, and receipts from 1981 from UK specialist Graypaul Motors. A letter from company principal

David Clarke discusses possible causes for the car smoking excessively despite it having covered all of 6000km from new (worn piston rings). Moving ahead in the narrative to the mid-1990s, the car was treated to a makeover. At some point in its history, it had been resprayed in ‘Retail Red’ rather than its original two-tone livery Using the dashboard instrument hues for reference, the car was repainted in its current blue and silver.

Which brings us to today Up close, the Inter is far smaller than you might imagine, the Vignale silhouette prettier than that of 195s bodied by rival coachbuilders such as Ghia and Motto. That said, the proportions are a little skew-whiff, with a high beltline, low roofline and bulbous rear. But it is a compelling outline, and one that, unlike many other Vignale Ferraris, is mercifully devoid of unnecessary styling tinsel. No lashings of chrome or tail-fins here. Inside, it’s equally devoid of frippery but far from austere, the combination instruments sited within the body- coloured dashboard being works of art in themselves. What does come as a surprise is just how much space there is. There’s plenty of headroom and the tops of the doors don’t crowd you. That said, the seats typically don’t offer much meaningful support, and you do feel a little perched with the vast Nardi wood- rim steering wheel dictating a slightly skewed driving position. It isn’t remotely uncomfortable, but it does date the design. It feels very much of its era.

With the fuel pump primed, and following a few pumps of the throttle, the ‘Colombo’ V12 fires without the sort of fluffing and popping you might expect. There is not much in the way of fanfare, more a muted burble at idle. The car is currently running a triple-Weber set-up and it is rather more vocal on the move. You would be disappointed were it otherwise. It sounds busy, as small gears, tiny rockers and little chains whirl and mesh to make music, the sound quite unlike that of the larger 3-litre units found in 250-series cars.

The single-disc clutch is a lot lighter than you might expect, but there’s no synchro on first. The shift action is racy, with short, sharp throws, the close ratios ensuring that you have to work the five- speed ‘box to make reasonable progress.

‘It’s impossible to resist blipping the revs and changing down just for kicks. It’s that kind of car’

This is no hardship, and it’s impossible to resist blipping the revs and changing down just for kicks. It’s that kind of car.

The worm-and-sector steering seems initially leaden by modern standards, the Inter requiring more guidance than you might expect at pottering speeds, but it meters out reasonable feedback the faster you travel. Our test route is a hillclimb course, lined in part with Armco and, while you’re obliged to give the wheel a good heave in slow corners, it’s a delight on wide sweepers, where it feels appreciably lighter. On smooth asphalt, the ride is firm and taut, but over uneven surfaces you feel everything. That rather goes with the territory

On what passes for level ground, performance is spirited, though it pays to stick between 3500 and 5000rpm. The safe red line is apparently 6000rpm, but we aren’t about to find out. All too soon, playtime is over, but not before swapping seats so that its guardian can have a go. Gouveia doesn’t display a particle of doubt on a course he knows intimately but even he admits that it isn’t the ideal tool for the job. He has an F40 for that.

The Ferrari 195 Inter and the 166 Inter that bore it were the jumping-off point for Ferrari as a maker of road cars. This particular car also serves as a reminder of a period when models were fashioned by men armed with hammers and a good eye; of a time when Vignale was once Enzo’s partner and foil rather than just a nameplate attached to gussied-up Fords. This car matters. It is also a family heirloom and one that isn’t going anywhere soon. Just don’t label it a museum exhibit: it’s so much more than that.

With thanks to Adelino Dinis and Museu do Caramulo (www.museu-caramulo.net)

Above and right Engineer Colombo’s original 1.5-litre V12 had grown to 2.34-litres by 1951 (195 referring to the cubic capacity of each cylinder). This 195 Inter has the triple Webers of the Sport model.