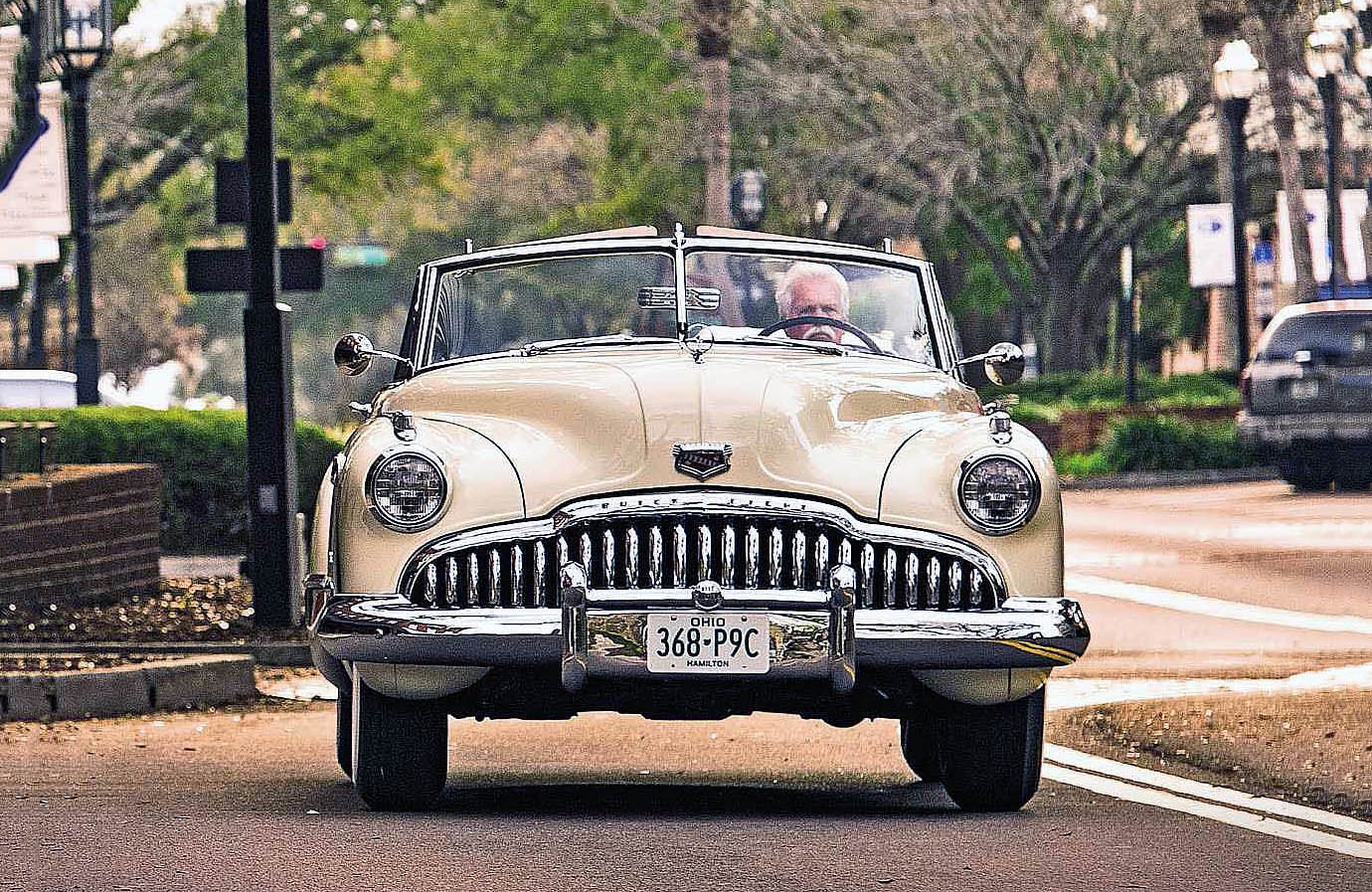 Rain Man Buick. Driving the restored Hoffman/Cruise movie car. ‘Dad lets me drive slow on the driveway’ This ’49 Buick starred alongside Dustin Hoffman and Tom Cruise in Rain Man. Since then it’s been owned by the film’s director – who’s just had it restored. Words David Lillywhite. Photography Dirk de Jager. 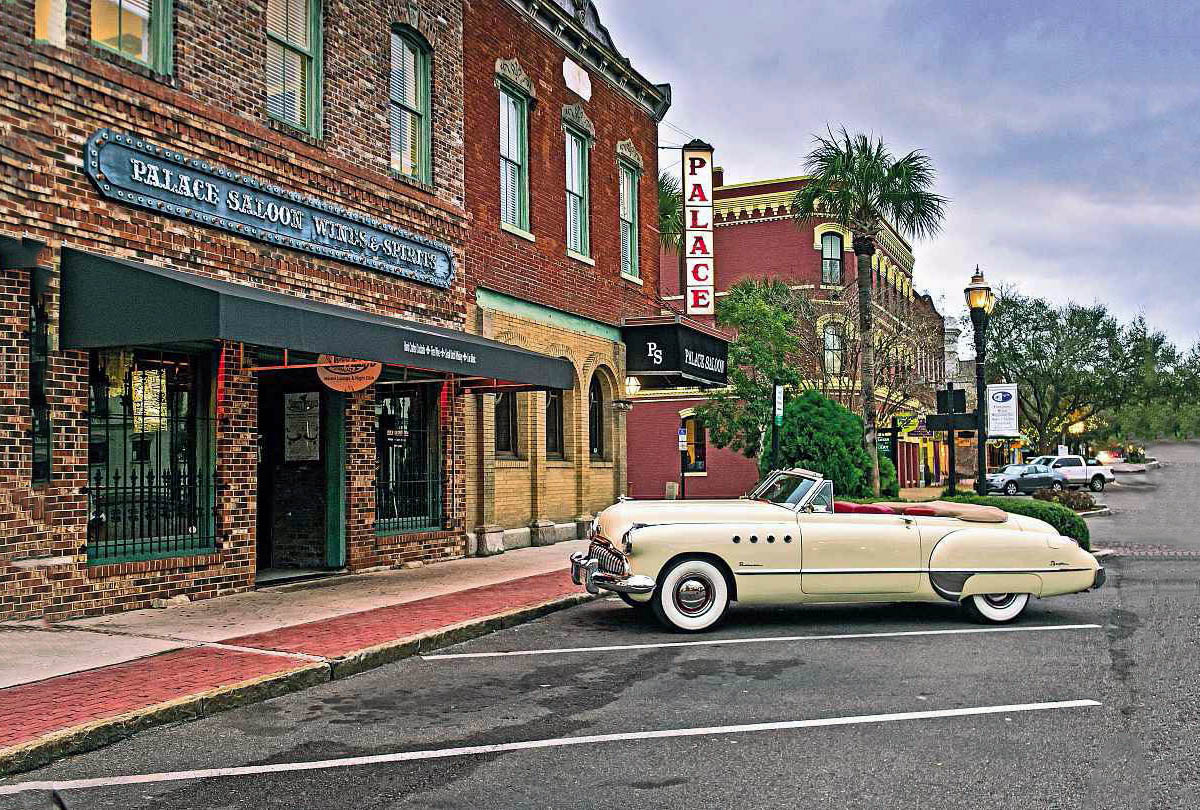 Left Raymond and Charlie Babbitt, played by Dustin Hoffman and Tom Cruise, on the road in the ’49 Buick back in 1988.

‘It’s a 1949 Buick Roadmaster,’ Raymond tells his brother, Charlie Babbitt. ‘Straight 8. Fireball 8. Only 8985 production models. Dad lets me drive slow on the driveway. But not on Monday, definitely not on Monday.’

The car you see here is the very same 1949 Buick Roadmaster, from the 1988 film Rain Man. It’s owned by the film’s Oscar-winning director Barry Levinson, and has just been restored by Wayne Carini, of TV’s Chasing Classic Cars. So we still have an all-star cast involved.

In case you didn’t know, Rain Man is the story of high-end car dealer Charlie Babbitt (played by Tom Cruise) discovering after his father’s death that he has an older brother, the autistic Raymond, or ‘Rain Man’ (Dustin Hoffman). When Charlie finds that he’s been left nothing but his father’s prized rosebushes and the Buick in the will, while Raymond has been granted $3,000,000, Charlie sets off to track down Raymond. He collects the Buick on the way, and the brothers end up on a fraught 2000-plus mile road trip from Cincinnati to Los Angeles. But you probably knew that already.

The story encompasses a big slice of America. It begins at the Babbitt family home in Cincinnati, before Charlie collects Raymond from the ‘Walbrook Institute’ – actually the St Anne Convent in Kentucky – and the pair take in Oklahoma City, El Reno, Amarillo and Las Vegas on the way back to Charlie’s house in Los Angeles, avoiding all highways. Why no highways? Because the savant Raymond has memorised highway accident statistics. He has refused to travel by air for the same reason.

And why was a Buick chosen for the film? Who better than director Barry Levinson to explain: ‘The original script had a different car, but I changed it to the ’49 Buick Roadmaster Convertible because, as a kid, I thought the Buick was really cool. It had “Dynaflow” [GM’s automatic transmission], and to me as a kid that sounded really cool  too. It was a childhood memory. When I chose the car I found out the ’49 was different from the ’48 model; it was the first new change to the design after World War Two. The ’50 changed also, making the ’49 a single-year model. ‘The car had a very strong visual presence in the film and was featured throughout; it became a character. Dustin, Tom and the Buick… in essence, the car had third billing.’ There’s long been discussion online over whether two or three cars were used for the filming. Barry remembers that there were three cars altogether, but one was ‘not in good condition’ and didn’t appear in the film.

Of the other two, the car here was the location car, fitted with uprated rear suspension to support the weight of a cameraman and his gear in the boot, and the other was the studio car, used for ‘green screen’ close-ups. When the shooting was finished, Dustin Hoffman and Barry bought the cars from the production company.

Barry went for the location car while Dustin opted for the studio car, which he sold only a few years ago. More recently, Barry decided he needed to get his car ‘back into shape’, and it subsequently went through a number of restoration workshops for assessment, without a successful outcome.

Then, last year, Wayne Carini received a call from Barry’s secretary, Amy, asking if he could take a look at the car and assess it for restoration. Neither the car’s provenance nor its owner’s name were mentioned, but Wayne agreed to have it delivered to his restoration company, F40 Motorsports, in Portland, Connecticut. 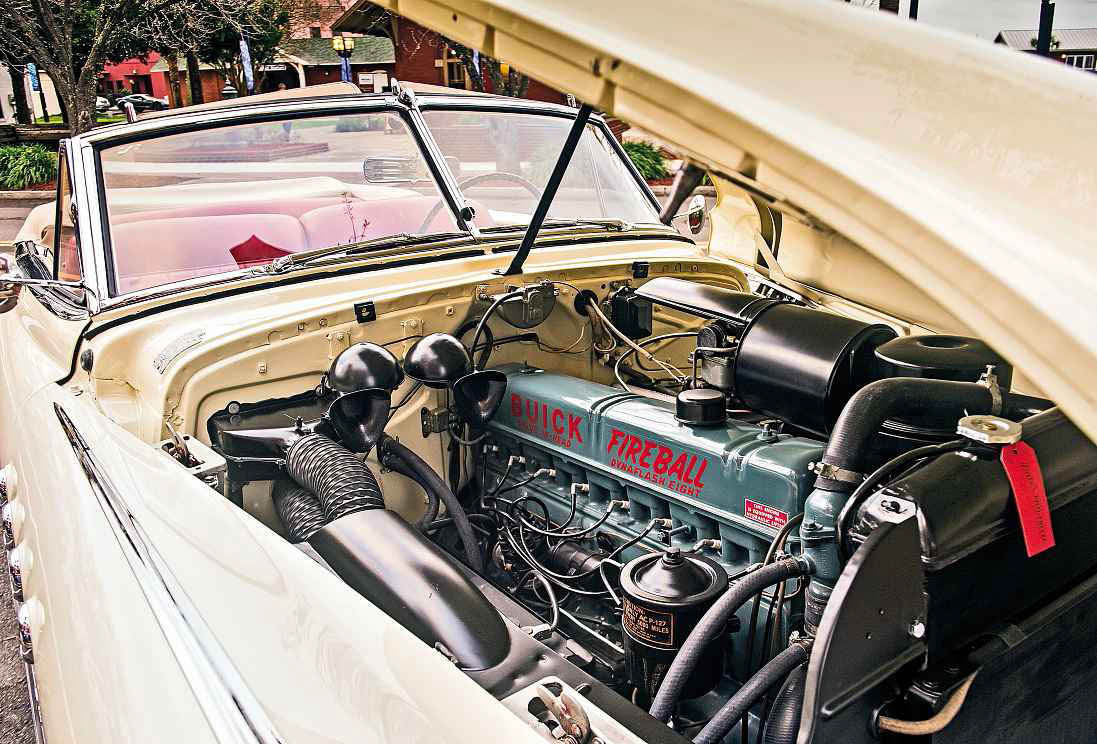 Clockwise from below The Buick’s Fireball straight-eight – it would take until 1953 for Buick to switch to a V8; Octane’s David Lillywhite and restorer Wayne Carini; the ‘pitiful’ red seats.

‘We received it in pieces,’ says Wayne. ‘I took a look, and it really wasn’t too bad, so I called Amy to talk to her about it. I said to her, you know, this looks just like the car from Rain Man. “Well, it is,” she said!

‘My daughter Kimberly has autism, and the movie came out around the time she was born. We found out about autism through that movie, so it really means a lot to us. It helped us understand. Autism has always existed but it wasn’t as widely known about then as it is now.’

So the restoration took on extra significance for Wayne, but he needed to persuade Barry Levinson to authorise all the repairs it needed.

‘He asked how much the car was worth, and I said well over $100,000. He was floored! He really didn’t expect that, and then he was happier about spending the money. You could see some of the work that had already been carried out – there were lots of bits in boxes, and all the chrome was off – but there was a lot left to be done. 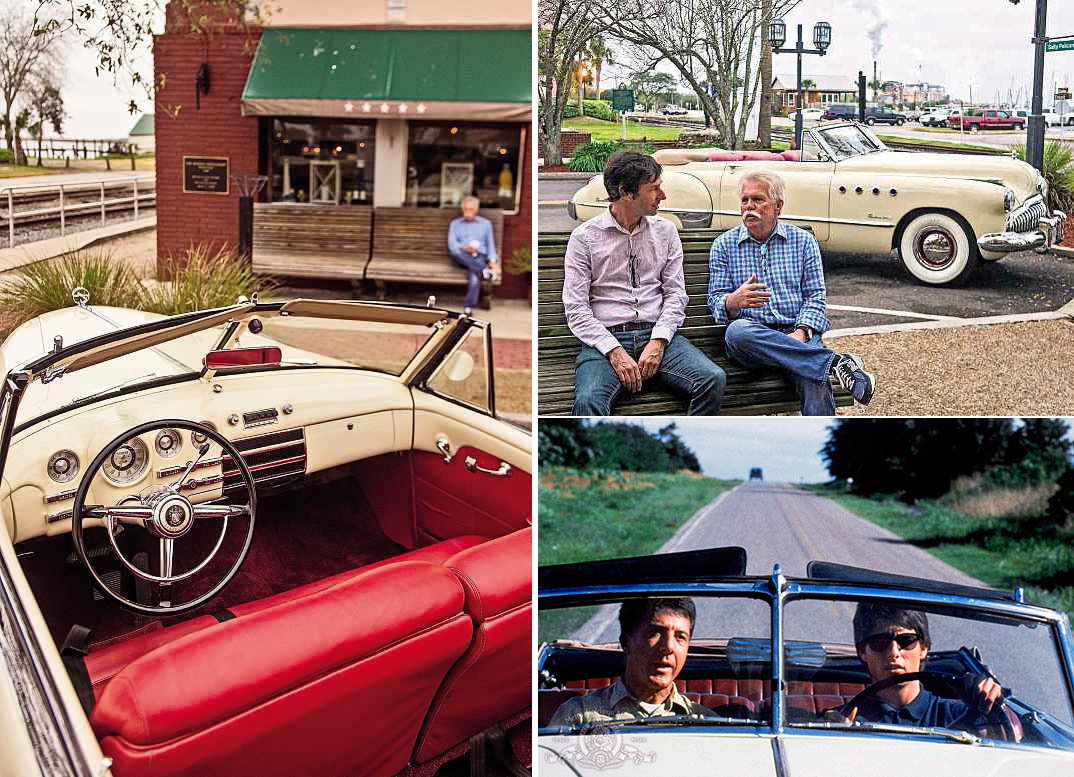 ‘The hood [bonnet] was just sitting on the car. Someone had tried to make it close, but it’s a difficult thing to align. We disassembled the rest of the car, had the nose off, had the engine out… We rebuilt it with new crankshaft bearings, a complete valve job, all that. It wasn’t bad, just tired.

‘There was a lot of rust in the rear quarter panels, at the bottom of the fenders where they always go, and all the chrome and stainless steel was in terrible shape, lots of dings and dents. I sent it all off to be restored, and it looks great now. I sent the gauges out too, had them all refurbished.

The next thing to do is to restore the radio – the buttonsare difficult to source.’ 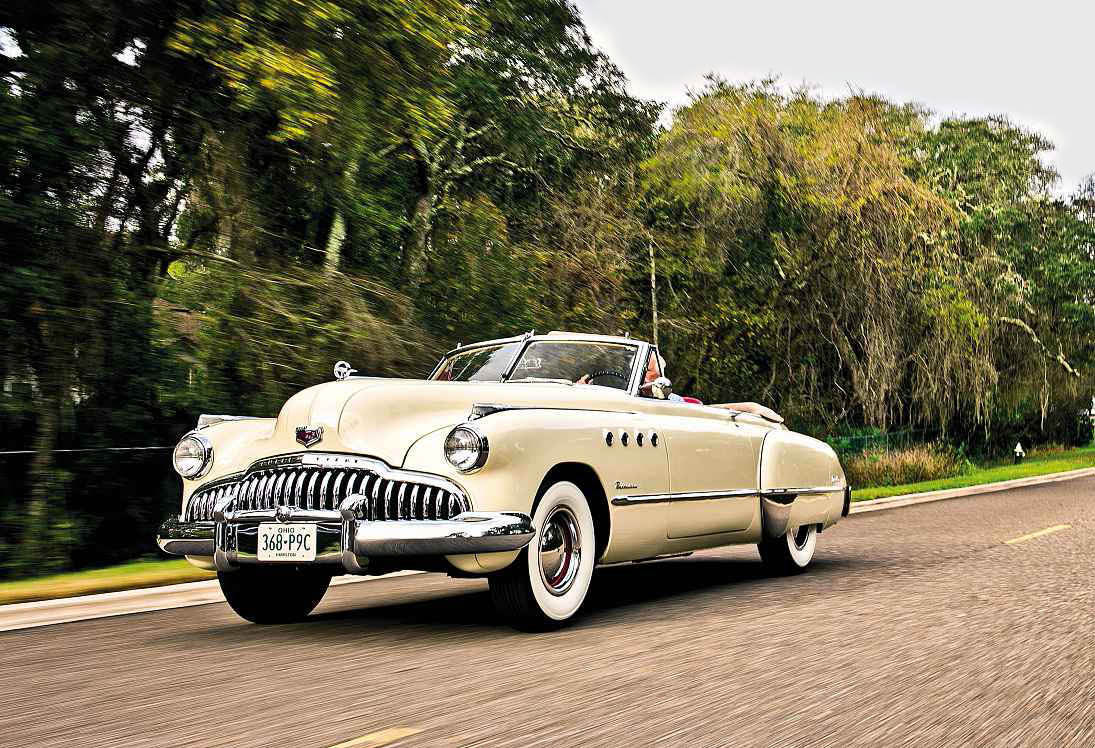 How strong, then, is the urge to tune the radio into WOXY, to bring to mind Raymond repeating its tagline, ‘97X, bam! The future of rock and roll!’ over and over as Charlie drives along Columbia Parkway, Cincinnati, ever more agitated by Raymond’s obsessive behaviour.

The Buick’s soft-top was in a mess and Wayne persuaded Barry that it should be replaced, at a cost of around $3000, but both agreed that the seats must remain untouched. It’s the seats that provide the first connection between Charlie and Raymond, when the latter sits in the Buick early on in the film and casually remarks: ‘’Course, the seats were originally brown leather, now they’re a pitiful red.’ From this, Charlie sees that Raymond really does know the car, leading to the later realisation that Raymond was the ‘imaginary friend’ of his early memories, whom he knew only as Rain Man.

Perched on that big, red bench seat, the very seat that Charlie and Raymond sat on (not to mention Charlie’s girlfriend Susanna, played by Valeria Golino), the Buick is exactly how you’d expect it to be. Large, soft and gentle, not fast but wonderfully relaxed. Being a ’49 it’s the fifth generation of Roadmaster, mechanically an evolution of the original 1936 model, stylistically an update to the Harley Earl-styled 1942-48 fourth generation.

It weighs two tonnes and drives through a slow-shifting two-speed auto so it’s no ball of fire, despite its 150bhp, 280lb ft ‘Fireball’ overhead-valve straight-eight. But it’s as charming as the film it stars in, and as recognisable as Tom Cruise and Dustin Hoffman. 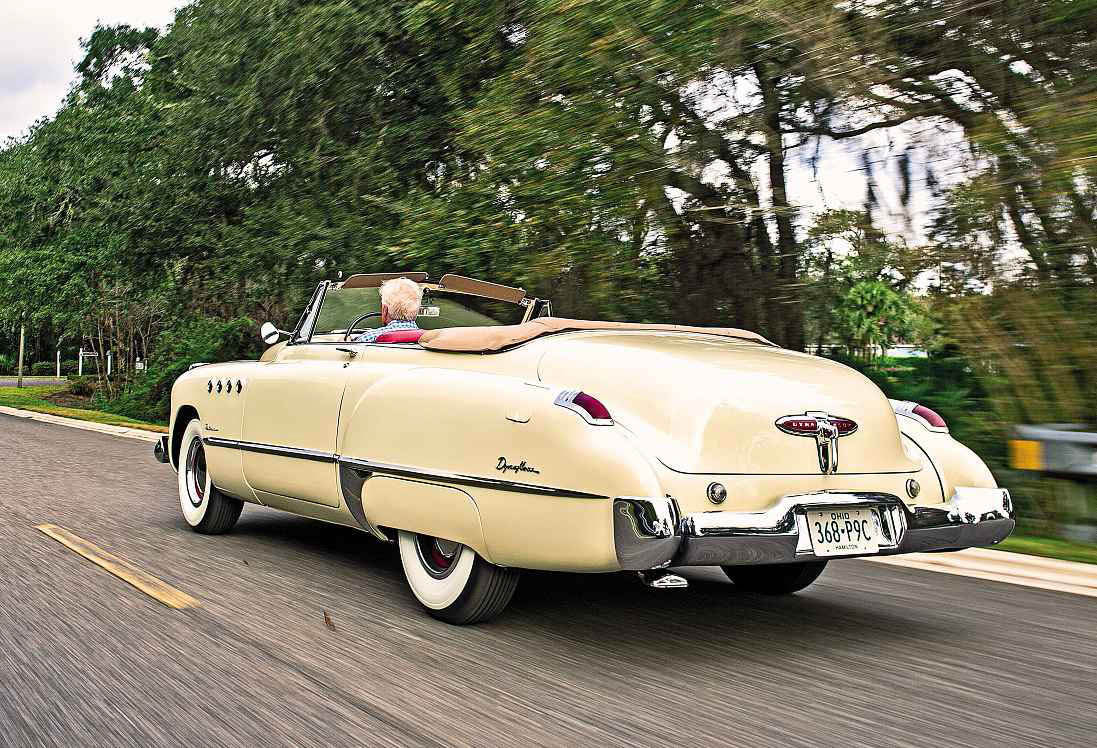 At the Amelia Island concours, where the Buick makes its first appearance post-restoration, it draws a huge crowd. And on our photoshoot, the following day, we pull over briefly on the main road through Amelia Island and immediately attract the attention of a passing truck driver, who shouts: ‘You need any help, Charlie Babbitt?’ Only later, once the madness of the previous few days has subsided, do I realise that the shoot took place on a Monday. Raymond wouldn’t have liked that. Definitely no photoshoots on a Monday.

‘My daughter Kimberly has autism and the movie came out about the time she was born, so it means a lot to us’