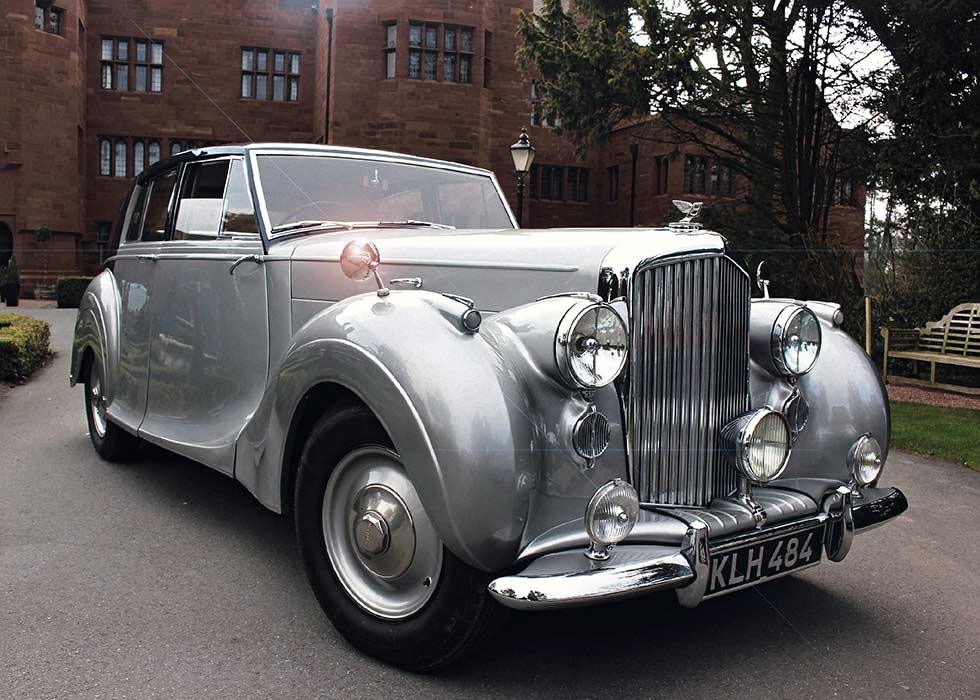 Coachbuilt Bentley the restoration story of a James Young ­Bodied MkVI… Post-War Splendour. Back in 1949, this magnificent James Young-bodied Bentley MkVI would have been quite a head-turner – and now is once again, thanks to the restoration efforts of its current owner.

In the post-war era of the late 1940s, a time of austerity and make do and mend, this Bentley MkVI – sporting coachbuilt bodywork by James Young – would have made quite an impression on the streets of Manchester. Built by Bentley in 1948, the rolling chassis (number B453CD) was delivered to James Young’s Bromley-based factory the following January, when the firm’s ‘C11’ four-door coachwork was added, as specified by the Manchester-based engineering firm that was to be the car’s first owner.

“Once the body had been removed from the chassis, John began revealing the ash frame beneath”

These days, the Bentley finds itself in the enthusiastic hands of John Wilson, who has previously owned and restored a number of desirable classics, including a Rolls-Royce Corniche, a brace of S-series Bentleys and an Alvis TD21 drophead coupé. It’s the kind of experience that proves invaluable when taking on any new restoration, although a coachbuilt Bentley can bring its own unique challenges.

“The razor-edged body that coachbuilder James Young provided is almost entirely of aluminium construction, but with a heavy-gauge steel bonnet and side panels,” explains John. “The design is unusual for the time for not featuring any visible sills or running boards, thanks to the doors being six inches deeper than you’d find on a factory-built MkVI.

The aluminium bodywork caused me plenty of problems thanks to oxidisation and cracking in places, particularly along the swage lines of the wings, which called for specialist aluminium welding repairs. The body panels are largely of bolt-together construction, which at least made their removal relatively easy.”

Once the body had been removed from the chassis, John began revealing the ash frame beneath: “This required a serious amount of work. One of the worst jobs involved making up a new A-post in ash by copying the original one that had rotted out. I managed to save the one on the other side, however, by splicing in a repair section.”

Another difficult job involved replacing the woodwork that supports the rear wheelarches, as well as dealing with rot to the wooden frame supporting the rear window aperture: “Considering this was a coachbuilt car, I was surprised by what I discovered. The rear window frame is notorious for leaking, but mine was so rotten that I could squeeze the wood and it would simply give way. The rear window was held in place by a piece of poorly fitted half-inch beading, and the glass was secured with household putty! I made a replacement frame to secure the rear window, this time out of solid walnut.”

While work continued on the structure of the car (including replacing the corroded boot floor), John began taking a look at the state of the Bentley’s mechanicals. This might have been a coachbuilt model, but it obviously employed the same running gear as a factory-built MkVI: “The brakes, steering and suspension – coils at the front, leaf springs at the rear – didn’t require much attention,” explains John. “Even the brake shoes were in good condition and were re-used.”

The same went for the 4257cc six-cylinder sidevalve engine, which was running well when John bought the car: “Upon examining the valve gear and cylinder head, I found everything to be in good shape, as were the crank, mains and big-end bearings.

The engine was full of gunge, however, and so it had to come out. I needed to re-ring the pistons, but then I couldn’t find the right size of piston rings – the ones I looked at were either too wide or too narrow. I bought a set of slightly oversized rings and asked a local engineering firm to widen the piston grooves by 10 thou’ so that the new rings could be fitted, which obviously saved me the trouble and expense of a new set of pistons.”

With the valves then reground, John was happy with the end result: “The engine was spot on again.” One of his biggest challenges, however, was replacing the car’s worn clutch plate, something that proved to be a good deal more difficult than any of the engine work: “Changing the clutch plate wasn’t easy, as it proved to be impossible to get at the gearbox in the normal way by going underneath the car. An old Rolls-Royce engineer suggested to me that the best way was to get the engine and gearbox out as a whole. But as there were so many mechanical linkages getting in the way – for the hand and foot controls, fuel lines and other connections – that needed to be undone in the engine bay, I decided it would be easier to remove the front seats and the front floor panel in order to gain access to the gearbox.”

One concession to modernity that John always insists on is the fitment of an electronic fuel pump, having been let down by the mechanical type numerous times in the past. As he drove me to our photo shoot destination, he explained how the Bentley is only happy when running rich: “The engine needs a very rich fuel mixture, although this wouldn’t have been much of an issue with an expensive car like this when new.

When I tried to run on a weaker mixture, the engine didn’t like this at all. Annoyingly, the adjuster screw on the twin SU HD6 carburettors is underneath the carb body, unlike the adjusters on my Bentley S2 and S3 that are so easy to access.”

By the time John had the Bentley ready for its long-awaited respray, he was already three and a half years into the project – but at last he could see the finish line ahead. The car’s new paintwork was entrusted to Paul Irving, of Irv’s VW Restorations in Barrow-in-Furness, someone that specialises in VW camper vans but also has experience of a wide range of classics. The end result speaks for itself, with the excellent finish being complemented by bumper-to- bumper re-chroming courtesy of Coventry-based Marque Restore.

When it came to the interior, John chose to have the seats reupholstered in the same colour and texture of leather as that supplied by James Young: “Although the condition of the seats didn’t look bad in the photographs that I saw before I bought the car, I decided it was worthwhile having the work done, with CJ Auto Trim of Preston doing an excellent job for me.”

The wood veneer dashboard was also suffering, with sections of veneer either missing or falling away. Each piece was carefully removed and replaced with European Walnut veneer and polished to a fine gloss by classic car trim specialist Chapman and Cliff. John’s extensive contacts in the Rolls-Royce and Bentley world then furnished a replacement Smiths speedometer, as the one that the car came with was badly marked; and although the wind-up dashboard clock had gone missing, he managed to procure an electrical one, once fitted to a factory-bodied Bentley MkVI: “I was very glad to find this clock, as locating a wind-up one would have been very expensive. I did, however, check that the clock face was exactly the same in both versions.”

With the Bentley finally complete and back on the road, how does proud owner John rate the driving experience? “The car has very good brakes, hydraulic at the front and mechanical at the back, and I’ve had no problem setting them up. They can’t compare with modern cars, of course, but they’re not bad at all. The gearchange being on the right-hand side, next to the driver’s door, does take some getting used to, but you soon adapt to working the gears without really thinking about what you’re doing. The handbook advises starting off in second, which you can do most of the time as first is really just for hill starts. And there’s so much torque from the engine, you can keep it in top gear even on long, steep inclines once you’re on the move.”

Although this wasn’t a particularly large car by Bentley standards, a James Young-bodied MkVI was more likely to have a chauffeur at the wheel than an owner-driver when new, which explains why the space behind the steering wheel is fairly restricted, with roominess and comfort being reserved for occupants in the rear. Nevertheless, John finds it perfectly adequate – and reports that a six-feet-tall friend of his can drive the Bentley without difficulty.

The MkVI also lacks power-assisted steering, of course, although John doesn’t find this to be a particular chore on most journeys: “All in all, it’s a very nice car to drive on the open road. You just tend to avoid any particularly tight spots thanks to the absence of power steering, as it takes a bit of muscle to get this car going where you want it to go at low speed.”

“The end result speaks for itself, with the excellent finish being complemented by bumper-to-bumper re-chroming”

The front A-pillars were particularly rotten on John Wilson’s Bentley MkVI. The rear window frame was totally rotten, which meant making an exact replica. The bodyshell was braced to ensure there were no problems with distortion. The mostly aluminium panels of this James Young body are bolted into position. The entire front end was removed for bodywork repairs with the engine out. The engine received new piston rings, re-ground valves and other essential work.

Having taken over Bromley-based J.K. Hunter in 1863, James Young was a well-established carriage maker well before the arrival of the motor car. The company’s first order for a motor body came in 1908, with the creation of a one-off design for a local MP, based around a Wolseley chassis. The first James Young body built upon a Rolls-Royce chassis was delivered in 1912.

James Young switched to building lorries, armoured cars and ambulances throughout much of World War I, with the eventual cessation of hostilities seeing the firm focusing on Rolls-Royce chassis for private clients, creating bespoke designs based around models like the Phantom II and III, 20/25 and 25/30. The firm survived the worldwide depression of the 1930s, but was later acquired by Jack Barclay Limited, the London-based Rolls-Royce and Bentley dealership.

The onset of World War II saw the company switch to manufacturing aircraft parts, finally reverting to car bodies in the post-war years – achieving success with its own variations on the Rolls-Royce Silver Cloud and Phantom V theme. James Young’s involvement with Rolls-Royce diminished in the era of the monocoque-bodied Silver Shadow, however, as the idea of a separate chassis fell out of favour. It did, however, launch its own two-door version of the Silver Shadow, of which just 35 examples (plus 15 of the Bentley T-series) were built during 1966 and ’1967.