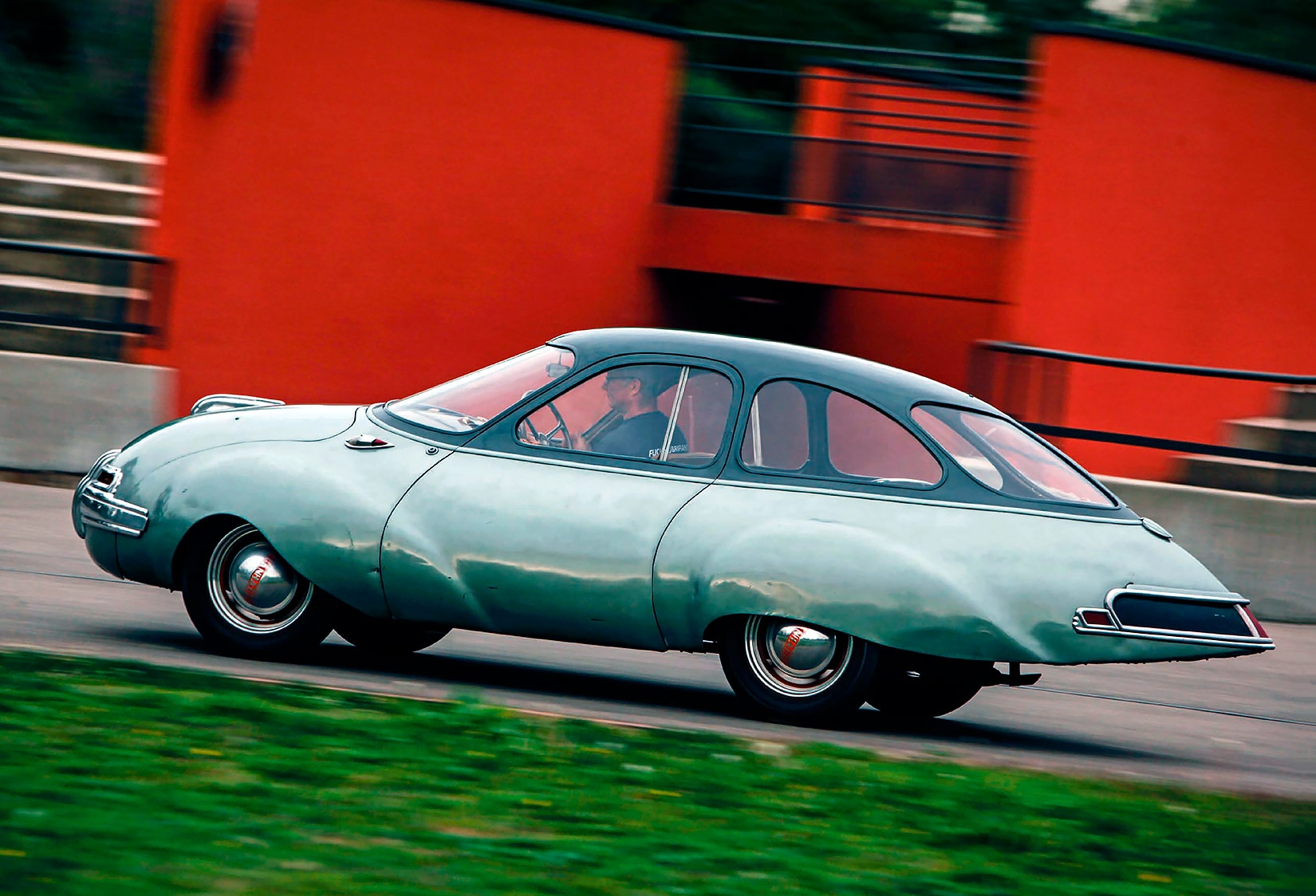 Close your eyes and think back to France in 1948. The latest models from Peugeot and Renault, the 203 and the 4CV, have borrowed their style from the last pre-war era of American cars. Citroën is making the Traction Avant, first seen in ’34, and is readying the 2CV, a Nissen hut on wheels that would be memorably described by one Paris journalist as ‘this small abortion in metallic grey’. The country’s upper-crust makes are either selling warmed-over pre-war formalism or have turned to ham-fisted attempts at all-enveloping modernism from fading outside coachbuilders who should have known better. 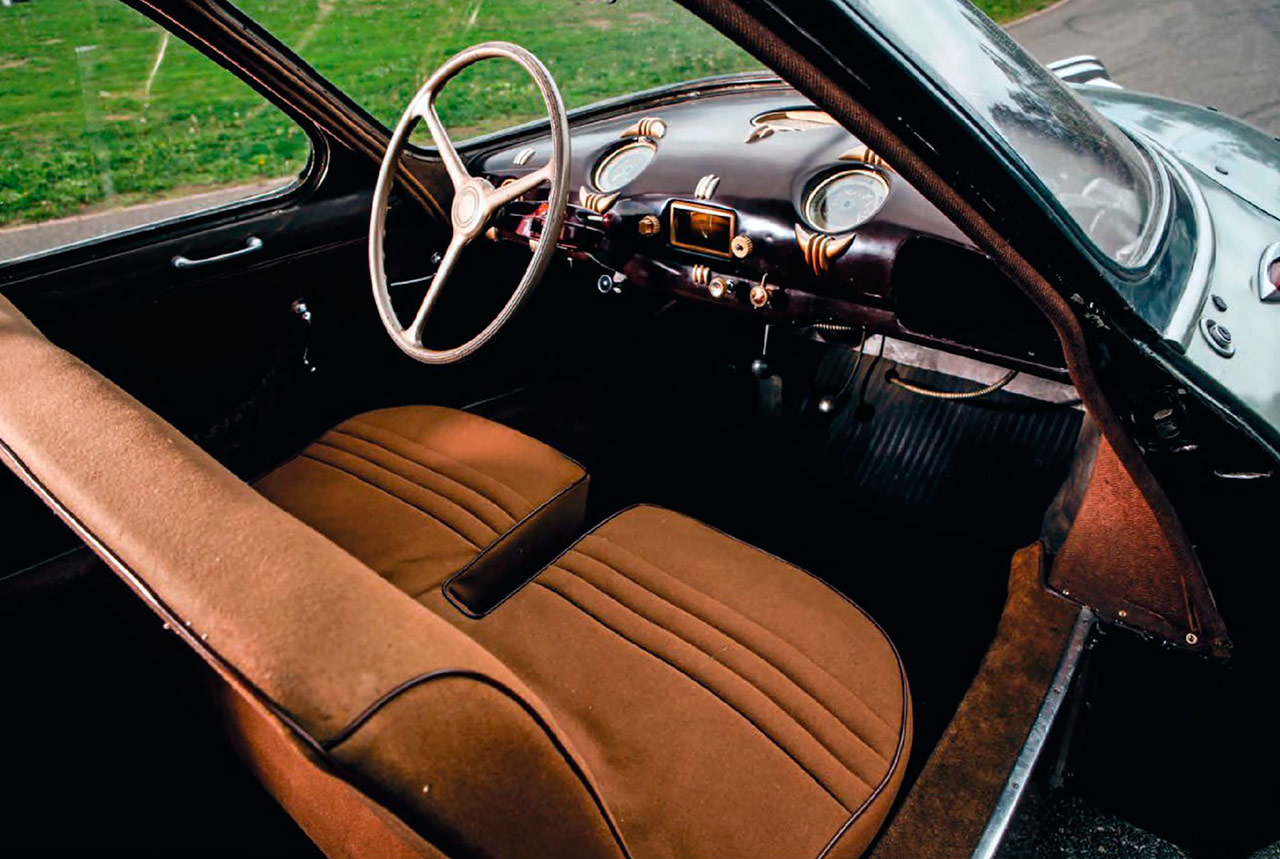 From top: cabin is as bold as the radical shape, which makes it cosy; dash is a Deco masterpiece like the exterior, with near-flat Jaeger instruments; pure teardrop gives Cd of 0.28.

Now open your eyes and look at the Panhard Dynavia, and you’ll understand why it stunned visitors when unveiled at that year’s Paris Salon. Never mind notions of being fresh and contemporary: this was futurism ready-wrapped for the front covers of the nation – and all the more of a shock in that it came from France’s oldest manufacturer of motor cars. The Dynavia wasn’t some flash-in-the-pan show stunt, though. It was a serious experimental exercise that paved the way for the next generation of Panhard saloons.

Reflect a little, and you’ll realise that the car wasn’t exactly a bolt from the blue. Panhard might have changed tack when it switched from lumbering sleeve-valve luxury models to the pee-wit twin-cylinder Dyna X. But the pre-war Dynamic had the same mix of streamlined design and exuberant detailing that would be found on the Dynavia. Both are the work of Louis Bionier, Panhard’s body engineer from 1929 onwards, and they point to a continuity in thought. The Dyna X was perforce a stylistic parenthesis, in that it was based on the architecture of the Aluminium Français Grégoire rather than being a clean-sheet-of-paper design. 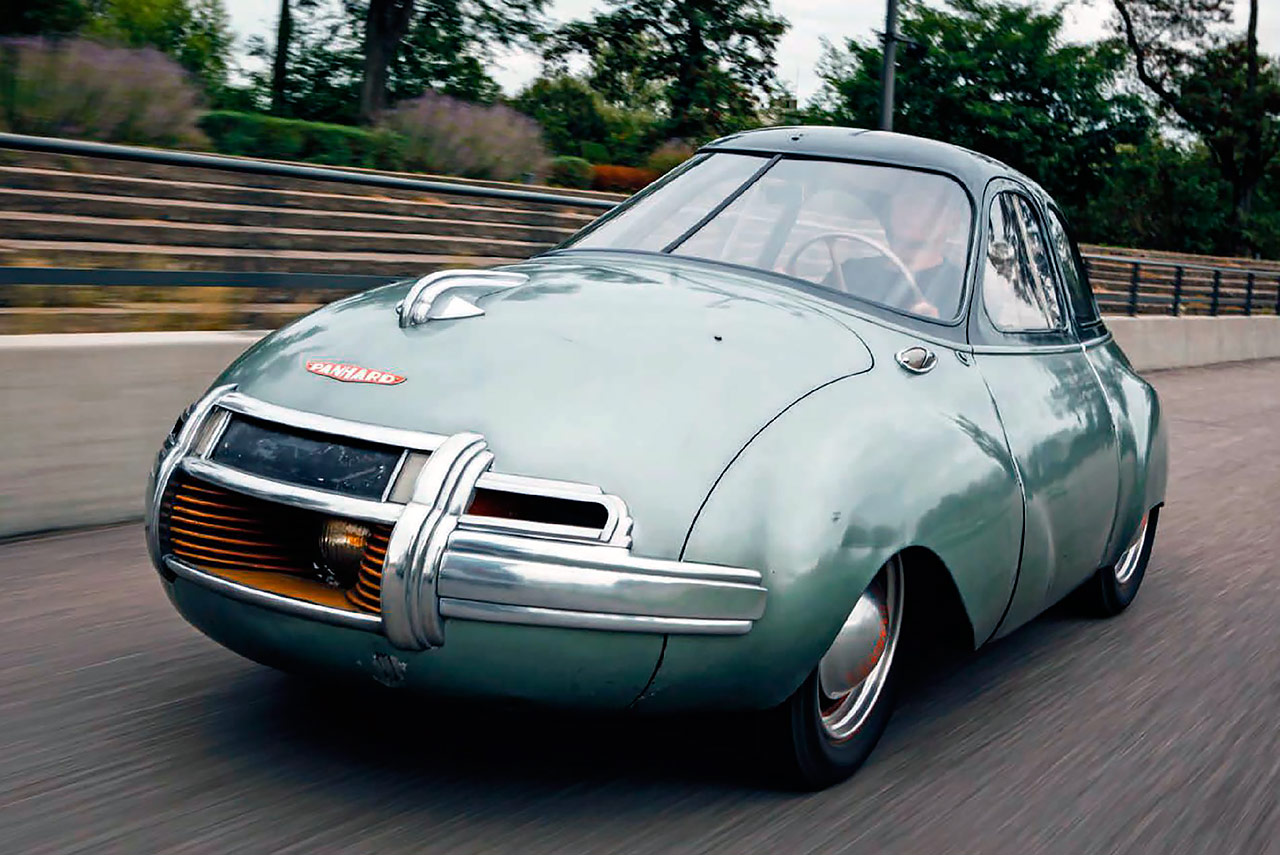 The missing link can be found in Bionier’s studies, begun during the war, for an aerodynamic seven-seater saloon. By 1945, he had completed detailed sketches and a scale model had been made. The VP6, as it was called, was intended to seat two people at the front, three in the middle, and two in the tightly drawn rear, and it was shaped as a smooth teardrop, with enclosed wheels front and rear. The project advanced no further than this, but clearly laid the foundations for the Dynavia, a more realistic proposal built around Dyna X underpinnings.

It was clear that the eventual replacement for the ‘X’ would have to inherit its mechanicals. If improved performance were required, along with acceptable fuel economy, then the new car would have to be of lightweight construction and as aerodynamically efficient as possible. The Dynavia was built in order to explore these avenues. It was also said that the car was intended for competition use. Even though the notion had a certain logic, this was almost certainly PR flannel – at least until the moment when it became clear that the Dyna X was capable of honourable results in national and international rallies.

In its aerodynamics the Dynavia drew on the VP6, Bionier arriving at a more extreme teardrop form after experimentation with fifth-scale models. The final shape was refined full-size in the wind tunnel of the Institut Aérotechnique at St Cyr and on the road. Here Bionier innovated. Unsatisfied with using wool tufts to indicate airflow, he devised conical vanes on a stalk that were attached to the body by suction cups. A keen photographer, he then rigged up a cine camera to record the behaviour of these vanes.

The resultant drag coefficient was quoted as 0.17, a figure that was astonishing but alas hardly trustworthy. Never mind, the truth was nearly as impressive: when Peugeot put the Dynavia through the St Cyr wind tunnel in 1981 it registered a Cd of 0.28, which was better than the following year’s ‘aero-look’ Audi 100.

The other key element was the Dynavia’s construction, with a Duralinox aluminium body bolted, riveted and welded to an understructure based on the vestigial Dyna X chassis. This kept weight down to 650kg (1433lb), which, together with the aerodynamics, allowed the car to achieve a top speed of 80mph using a 28bhp version of the Dyna’s 610cc flat-twin. In contrast, a Dyna X could only manage a tad over 60mph. Fuel consumption, meanwhile, ranged from an eyebrow-raising 80.7mpg to a more realistic 56.5mpg – the latter figure being achieved on a 60-mile run at an average speed of 65.9mph.

As a gauge of the seriousness of the project, two Dynavias were built. One was kept by Panhard but the other was sold in ’52 to its agent in Grenoble, who used it in local competition. It seems that this car was scrapped in the 1960s, but the other example – the original show car – has ended up in the former Schlumpf collection, the Cité de l’Automobile in Mulhouse. Latterly it has been restored to running order.

From top: ideas evaluated in Dynavia led to Dyna Z production model; aircooled flat-twin; Dynavia on its debut at Paris in ’1948; prototype ‘zero dazzle’ slit lamps above and to sides of single central spot.

In the metal, the Dynavia has every bit as much impact as in any photos. One’s first impression, erroneously, is of its apparent smallness (it’s 4.82m long, or 15ft 8in), the second, accurately, of how narrow it is – at least in its superstructure, thanks to the exaggerated pear-like shape. This narrowness is further emphasised by the drawnout tail, which is brought to a sharp point incorporating a double numberplate housing that lifts for access to the spare. The detailing of the housing echoes the extravagant Art Deco front grille and bumper assembly, typically flamboyant Bionier touches that are reprised in the ornate bonnet mascot and the fluted filler cap.

The lower body, meanwhile, has an exemplary cleanness, with gentle bulges over the semienclosed wheels and a simple push-button to open the doors. The most radical feature is the apparent lack of any headlights. There is a spotlamp in the ribbed air intake but the main lighting is looked after by experimental ‘zero dazzle’ Cibié units projecting flat beams and housed in slots either side of the bumper uprights. Lift the hefty one-piece prow and you’ll find these bizarre lamps hidden deep in bazooka-like housings. 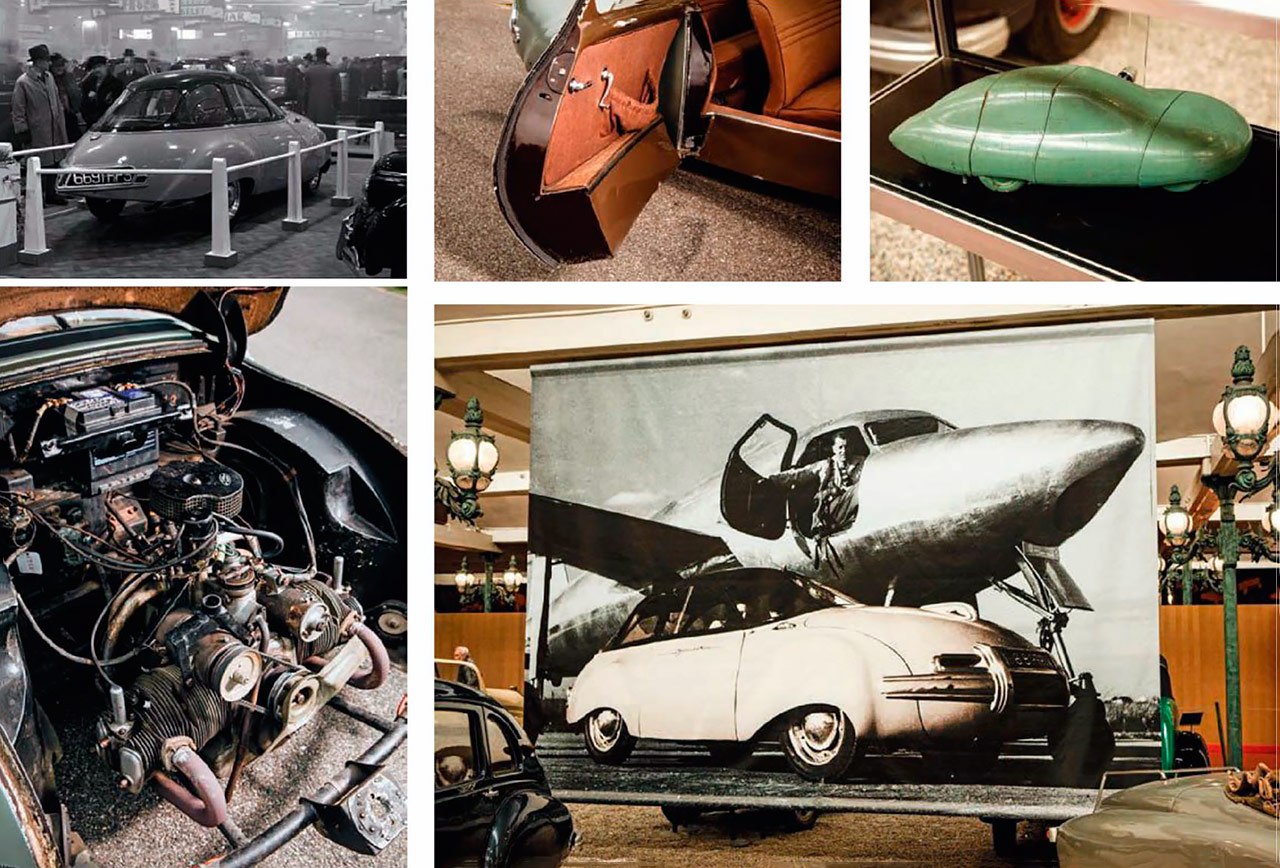 From top: Dynavia about 3ft longer than Dyna X and nearly 1ft wider, at least at base of body; deep doors; sectioned model; photo emphasises the car’s link with aviation.

A generous glass area was part of the remit – and in line with pre-war Panhard tradition. So the interior is anything but claustrophobic. But it is very tight. In the front the tumblehome puts you right against the door, which is enormously deep, while the modestly dimensioned rear seat has a shallow backrest. Detailing chimes with the exterior, the laid-flat dials in the deep dashboard having stylised gold-painted mouldings top and bottom. Thankfully the trim is in a sober brown velour; were it in deep red, the effect would be somewhat akin to Louis XIV’s bed-chamber.

The Dynavia feels nippy enough, but no faster than a Dyna X. It weighs more, thanks at least in part to the surprisingly thick aluminium panelling. It does however seem more refined than the somewhat highly strung Dyna, which may again be a function of the more substantial bodywork. The four-speed gearbox is standard Dyna, which means no synchromesh and a vague gate for the under-dash lever; perfunctory doubledeclutching ensures clean shifts, but the change up to third can baulk. The rack steering is nicely precise, the brakes are effective and roll is adequately checked – which is just as well, given that the rear wheels bark on the arches in cornering. This is the sort of thing that emphasises the Dynavia’s prototype status, along with the allplastic glazing and the absence of wipers.

Such observations are beside the point. The Dynavia was an exercise in thinking aloud. It gave Panhard the confidence to explore smooth streamlined forms, and helped develop testing procedures to assess their effectiveness. It also prompted reflection on aluminium structures. More than just a show car, in demonstrating that a lightweight, aerodynamic design could be high performing and economical it validated the engineering pathways that led to the advanced and conceptually clever Dyna Z of 1953. That such a significant vehicle is preserved, and in running order, seems a fitting memorial to the talents of Louis Bionier and his team.