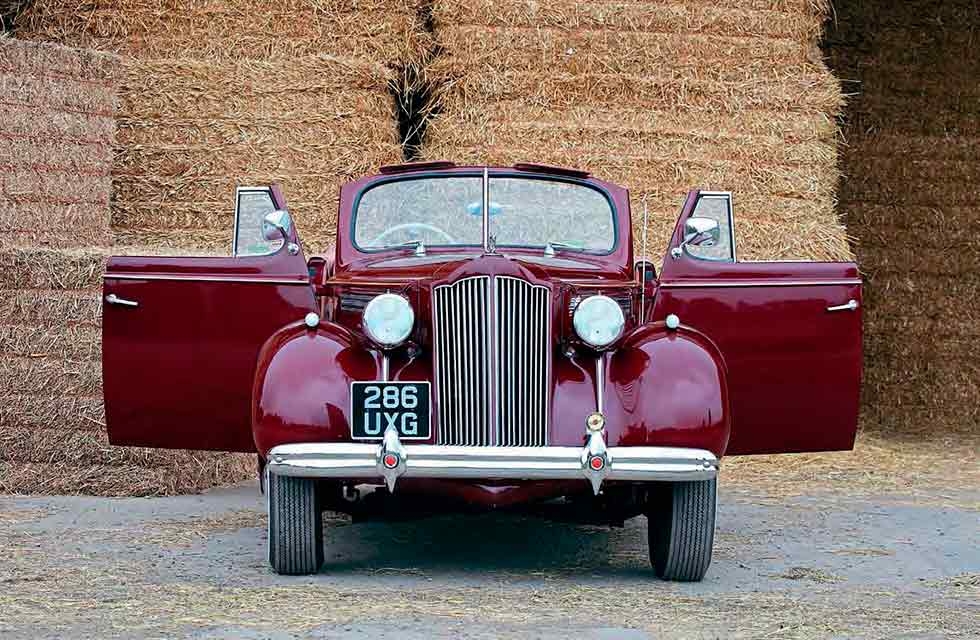 The Packard name still carries a tremendous cachet, 60 years on from the firm’s demise. It could well have died out even earlier had it not been for cars like this 120, because the Thirties were grim times for luxury car makers. Both in America and Europe we saw many famous names go to the wall in the wake of the Depression, almost all of them stubbornly carrying on with immense, hand-built cars that cost a mint to develop and not much less to buy. But Packard did something different.

They judged that it was possible to preserve the firm’s reputation, while at the same time mass-producing their products for a much larger, lower-priced market. But it would have to be done with care. The family resemblance between the new 120 and the existing ‘senior’ line, the Standard Eight, Super Eight and Twelve, was pretty strong. But just as important, the smoothness, silence and build quality wasn’t far off either. Yet the new 120 started at $980 in 1935 compared to $2475 for the cheapest senior Packard. It worked straight away. Of 32,000 Packards sold in 1935, 25,000 were 120s. Perhaps the 120’s more advanced specification helped – if you wanted a Packard with hydraulic brakes and independent front suspension, you had to buy a 120. Having proved their worth, these features were adopted across the range in 1937. By then, another junior Packard had arrived, which had two effects.

The 115 started with a 3.6-litre straight six, and the idea of a Packard with fewer than eight cylinders turned off some of the company’s more traditional fans. As did the appearance of Packard 115s as taxi cabs… not good for the brand. The other effect of launching the 115 was of course to elevate the 120 off the bottom rung of the ladder – its name changed to the Packard Eight for a season in 1938, blurring the distinction with the old hand-built senior models, then reverted to the 120 for 1939.

It was a match for anything in its price range. Dennis Smith, the owner of this lovely 1939 120 Convertible Coupe, has a sales brochure from its birth year that gives the price new in the UK as £495 – Packard offered official imports throughout this period. Another source gives the price of the slightly larger and more complex Convertible Saloon as £715 for that year, which seems a big difference, though the latter figure may include tax. Either way, these cars looked excellent value. In the USA, the 120 undercut the Cadillac Series 60 (and then 61) in 1938 and ’1939 and in the U K Dennis’s convertible would have been £100 less than something comparable, if less powerful, like an Alvis Silver Crest drophead coupé.

But Dennis’s car didn’t come to the UK, at least not to start with. It’s marked on the chassis plate as 1701 – Export Only. Its first home was in fact in Australia, and while Dennis has a sheaf of paperwork from decades past, most of the detail is from more recent times, when it passed through ownership in Germany as well as a couple of previous UK owners after departing from the southern hemisphere.

It must have been an unusually glamorous sight in Australia all those years ago. Complete Knock-Down (CKD) versions of modest British and European cars made up most of the traffic, with Australia’s indigenous marques only getting into their stride after the end of the war. For some time Dennis suspected that the Packard went to Australia in CKD form, but an American Packard ex pert has assured him that all were built in North America – even those with factory right-hand drive for export markets. Either in Detroit or the Windsor, Ontario plant over the border in Canada.

It would be fascinating to know the full story of this car’s time in the southern hemisphere, so if by any chance you can help, please contact the magazine. But Dennis has only the file of printed history that came with the car when he bought it at auction, so the anecdotal link from owner to owner hasn’t survived. “I went along to a sale near Prinknash Abbey outside Stroud in 20 1 2,” says Dennis. “I just fell in love with the car and I had to have it. I don’t know quite when it came to the U K but apparently it was restored in Australia some while before and then sat in storage for 15 years or so. The colour is actually an Australian Ford colour.”

It’s probably a good approximation of the right tone though. The interior is a very distinctive salmon pink leather and, remarkably enough, Dennis has seen a model of a 120 Convertible Coupe with the same shade inside. The external condition was very good indeed and Dennis has only renewed the hood and polished the shiny bits. “I had a little bit of mechanical work to do to get it reliable – a new carburettor and a new lift pump. Now it gets a bit of bother with modern petrol, and I sometimes have to stop to clean out the kind of film that builds up, but that’s all part of the experience with a car like this.”

Dennis has classic trucks as well as the Packard and unsurprisingly says the difference on the road is like night and day. “You can’t hear this one run; it’s like a Rolls-Royce in comparison.” Or indeed like a Packard… the gearbox is an all-synchro three-speed manual column shift. Packard introduced an optional overdrive in 1939, and while it’s not fitted to this ex ample, it’s one of those features that seems surprising on a pre-war car – the 120’s anti-roll bar is another. The sidevalve 4.6-litre straight eight is probably the least forward-looking part of the specification, but it has the great advantages of high torque and low stress, giving the car a likely 85 mph top speed. For Dennis, 55mph is an effortless cruise on the dual carriageway.

“It’s a lovely car to drive,” he says. “The six -volt electrics mean the starter turns over slowly but then it just fires, every time. It’s been very reliable. Now I’d like to find a suitable radio for it.” The dashboard is typical of the era – one of those incredibly convincing wood-grain effects on a steel pressing. With a handsome pair of dials (clock on the left, speedo in front of the driver) balancing the appearance, your only worry would be driving with the hood down and strong sunshine behind you – the glare from all the brightwork on the dash could be dazzling.

For now, Dennis is having a great time keeping the car in tip-top condition and taking it to shows. B y the time you read this, you may well have seen the car and its proud owner in person on our stand in the NEC, which gives an opportunity to make a direct comparison with some of the British offerings of the era. Yes, the great British marques produced some glorious cars with the handicap of a very restrictive horsepower tax based on piston area, but put yourself in the position of a wealthy Colonial from 1939: would you choose a multi-carb overhead valve engine in a car with wobbly ash-framed bodywork and cable brakes, or a sturdy, steel-bodied American luxury product with hydraulic brakes and a muscular sidevalve straight eight? No contest, surely. Perhaps there were more right-hand drive Packards under the Southern Cross than we thought. We’d love to know!

The Packard brothers made their first car in the 19th century, and though we haven’t been able top in down the date they began right-hand d rive exports, overseas sales to Commonwealth countries and other markets remained important throughout Packard ’s history.

There’s a record from 1934 of the company president claiming Packard’s ex p orts exceeded all those of the other American ‘fine car’ makers combined. They made RHD cars right up to 1954 and offered outside RHD conversions for a year or two after that.

When the second Packard factory site opened in Windsor, Ontario, in 1931, it took on most of the overseas production, probably because Canadian sourced parts and Canadian assembly made for favourable duty conditions to Commonwealth markets. The Canadian plant closed in 1939 when all RHD production reverted to Detroit – Canadian built cars will show CANADA MOTOR SALES or similar on the VIN plate. As well as the UK market, Packard sold RHD cars through at least two distributors in Australia, but also in non- commonwealth RHD markets (at that point) such as Japan and Sweden. RHD Packards have even emerged in Argentina.