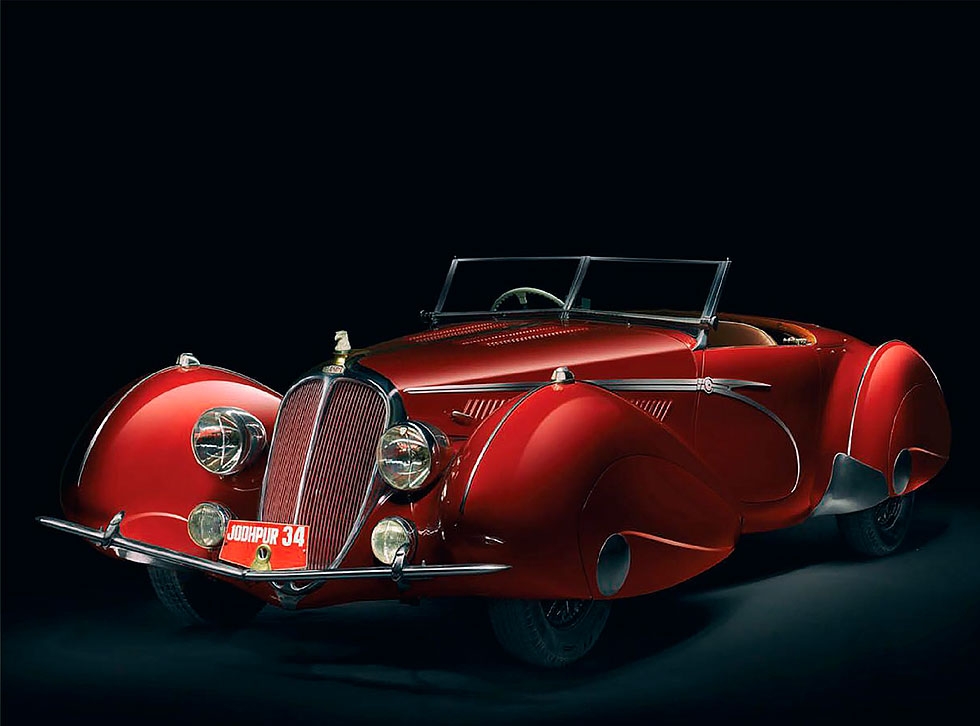 The most beautiful car in India. A Maharaja’s Delahaye Stunning coachbuilt 135. In an exclusive extract from his new book, India’s foremost classic car authority Gautam Sen tells the story of how this stunning 1939 Delahaye 135 MS arrived in Rajasthan. Photography Makarand Baokar.

Founded by Émile Delahaye in 1894, the eponymous French marque was better known for its trucks than for passenger cars by the 1920s. To combat this, boss Charles Weiffenbach commissioned 29-year-old engineer Jean François to design a series of sporty models. Soon after its launch at the 1935 Salon de Paris, the six-cylinder Delahaye 135 was making headlines by coming second on the 1936 Rallye Monte-Carlo. A win at the ’1936 Marseille Grand Prix, followed by second, third, fourth and fifth in the French GP of the same year and an overall win on the ’1937 Monte, sealed the reputation of the Delahaye as a true sporting legend.

One of the 135’s biggest assets was its lowslung chassis, which made it a popular choice for French coachbuilders as a platform for their masterpieces, allowing for some of the most extraordinary automotive forms ever. Arguably the most beautiful was a pale pink and orange roadster unveiled on the Figoni et Falaschi stand at the 1936 Paris Salon. Based on the shorter (2.7m long) Competition chassis, the flowing Delahaye became the star of the show, and four days after the Salon doors closed a 25-year-old Prince Aly Khan purchased it. This automotive aficionado was the flamboyant son of Sir Sultan Mohammed Shah, better known as the Aga Khan III, and the late father of the current Aga Khan IV, Prince Shah Karim Al Husseini. At the time the family had an important Indian base, so several cars were kept at various residences in the country for the use of the Agas and the Prince, but the Delahaye was destined to remain at Aly Khan’s Paris home, repainted a sombre black and registered 1111 RK6. The body of this car subsequently disappeared, though the chassis is very much extant and survives with famed American collector Peter Mullin, founder of the Mullin Automotive Museum as a tribute to French automotive design of this period.

Over the next year and a half – until mid-1938 – Figoni et Falaschi received orders for seven more cars based on the same design, although no two were identical. The ninth in the series was ordered by Paul Jourde, a Frenchman with a passion for India who was also a family friend of Joseph Figoni, with the latter taking refuge in Jourde’s Brittany estate, Château de Branféré, during the German occupation of France.

Jourde ordered the first of the 135 Competition versions on the standard (2.95m) wheelbase and, finished in the same red as the V12-engined Delahaye 165 that had starred at the 1938 Salon de Paris, chassis 49150 was shipped to India. This machine, now beautifully restored, is also with Peter Mullin, after being smuggled out of the country during the 1980s.

The following year, Jourde bought another similar car, the 10th in the series, but this time it was extra special in being a 135 MS. The ‘Modifiée Spéciale’ was the definitive version of Delahaye’s signature chassis. It had the potential for 160kph (100mph) performance courtesy of the triple twin-choke downdraught carburettors fitted to the truck-derived 3557cc overheadvalve straight-six, which made it a rapid as well as beautiful roadster. The exotic specification also included a Cotal electromagnetic gearbox and independent front suspension, by upper wishbones and a transverse leaf spring. Chassis 60217 was painted the same red as the Jourde’s first 135 before it, too, was shipped to India. And this is the car that you see on these pages.

It is not clear to whom Jourde later sold the 135 MS, but it is thought to have been the Raja of Akalkot, Vijayasinhrao Fatehsinhrao III. “It was bought new, as far as I have been told, by Raja Saheb of Akalkot,” explains Wasif Ahmed, an enthusiast from Hyderabad who knows the family that was strongly linked to the somewhat convoluted story of this car’s early history.

“He, in turn, sold the Delahaye to the late Nawab Zaheer Yar Jung, Ameer-e-Paigah, from Hyderabad. From him, it was bought by the late Nawab Ahmed Yar Jung (my mother’s brother), also from the Paigah family, in Hyderabad.”

In around 1946 it was exchanged for a 1939 Ford ‘Woodie’ and some 10,000 Rupees (£770) in cash. Because Nawab Ahmed Yar Jung and Nawab Zaheer Yar Jung were cousins, the transaction was done over the phone, and Zaheer Yar Jung had his driver take the car over immediately.

By that time, the Delahaye had been repainted a light turquoise with a black top, while the steering wheel and unusual columnmounted gearknob for the Cotal ’box were finished in ivory. The 135 was a show-stopper right from the start, and Nawab Ahmed Yar Jung was later heard to say: “When I went to see a movie at the Plaza Cinema, the public would come out and just stare at the car.”

The Delahaye was sent to Bombay for its hood lining to be repaired in 1948, following Partition and at around the time of the ‘police action’ in Hyderabad when Prime Minister Nehru’s army forces invaded the region to take on the ruling Nizam, who was striving to remain independent. With significant unrest after the Nizam’s defeat, the situation in the state was uncertain so when Prince Basalath Jah, the Nizam of Hyderabad’s brother, returned to the city with his entourage, Nawab Yar Jung asked if he could bring the Delahaye with him.

The Prince told the Nawab that he could only guarantee safe passage as far as Sholapur, so he decided to leave the car in Bombay. It was at this point that the Maharaja Hanwant Singh of Jodhpur picked up the stunning roadster for the princely sum of just 23,000 Rupees (£1770). The Maharaja bought the car from Bachoo Motors, where it had been left, and gave it to his younger brother Maharaj Himmat Singh soon before his death on 26 January 1952.

Perhaps the most bizarre incident in this famous car’s life occurred in 1965, when Himmat Singh swapped the Delahaye for his younger brother Dalip’s Willys Jeep. He had bought the Jeep from an American Embassy auction in Delhi 10 years earlier, and during the ’50s it was just the thing for the young blade Maharaj to cruise the boulevards of Jodhpur.

By the mid-1960s, however, Dalip Singh had set his heart on a sports car, having seen an Austin-Healey on a visit to Bombay. When he mentioned his plans to his older brother, Himmat suggested the exchange. Dalip couldn’t say no – in Rajput tradition, you cannot refuse your elders – despite not being very keen on this pre-war gas-guzzling French obscurity.

So, in 1965, Dalip Singh found himself the not-so-proud owner of a 1939 Delahaye 135. Little could he have imagined that more than five decades later, this magnificent car would still be his – and worth in excess of £6million, as one of just five survivors of the 11 Figoni et Falaschibodied Delahaye 135s made.

By 2005, the car’s paint was fading and had started to crack, so the Delahaye received a respray in its original bright red. Winning the coveted Best of Show award at the very first edition of the Cartier Travel With Style Concours d’Elegance, held in Mumbai in 2008, confirmed that this Delahaye is truly the most beautiful historic car in India.

The 101 Automotive Jewels of India by Gautam Sen and Makarand Baokar focuses on 101 of the most unusual, exciting and best-preserved automobiles to be found in this car-obsessed country, and documents the car’s impact on contemporary culture. It’s available from Heritage Publishers (www.heritagepublishers.in) and priced at £45 (INR2950, US$60); ISBN 978 81 7026 392 0

Signature swooping wings of the glorious Figoni et Falaschi-bodied beauty. Inset: the 135 pictured in 1946 at Phisalbunda Palace, Hyderabad, when it was owned by Nawab Ahmed Yar Jung of Paigah.

From top: magnificent 135 MS has now been in the same ownership for over half a century; ivory finish for steering wheel and gear selector are later additions; muscular ‘six’ derived from a truck unit.

Only 11 examples of the 135 were bodied in this style by Figoni et Falaschi. Right: unusual eagle bonnet mascot graces the Delahaye’s radiator.

‘IN 1965, HIMMAT SINGH SWAPPED THE 135 FOR HIS YOUNGER BROTHER DALIP’S WILLYS JEEP’

101 great cars, but which ones does FIVA Vice President Sen like best of all?

“One of the most powerful cars of its period – almost a late-1930s equivalent of the Bugatti Chiron today – this car was commissioned new by hardcore Bentley enthusiast JS Vatcha. “Both of its subsequent owners, PD Adenwalla and Roni Khan, were also dedicated fans of the Cricklewood marque, while the 8 Litre has at various times in its life shared garage space with an Invicta S-type, a Bugatti Type 44 and a Lancia Flaminia Zagato.”

“This striking car is one of India’s finest survivors from a period when motor racing was a popular pastime in the grand old city of Calcutta, a car that bashed fenders with the likes of an Allard J2 (now in the UK), several Jaguars – including the SS100 featured in the book – as well as a Bentley, a modified Lagonda, and even an Alfa Romeo 8C-2300 Monza.”

“For Claude Figoni and Les Amis de Delage, chassis 36577 was another vehicle that had disappeared for ever, because the trail went cold after the car left France, bound for the UK. And for the best part of the past four decades this Delage has been underground, before finally resurfacing for this book. If the Delahaye is the prettiest car in India, this other Joseph Figoni design is arguably a close runner-up.”

“This historically significant car is thought to be one of the oldest creations to survive in India from the design house of Pinin Farina – which has, since December 2015, been under local ownership, after the Mahindra Group took a controlling stake in the firm.”

“With King George VI among its customers, Lanchester’s Straight Eight numbered a very exclusive 132 cars. Of these, the final six ‘Daimler-Lanchesters’ featured a different mechanical spec and just one, this 1936 car, had a sports drophead coupé body by Vanden Plas.”

“The final Phantom II Continental to come to India, this Streamline coupé was also the last Continental built. Still in regular use, chassis 62UK features sublime bodywork by J Gurney Nutting, the most flamboyant of the classic British coachbuilders, along with a perfectly documented history.”