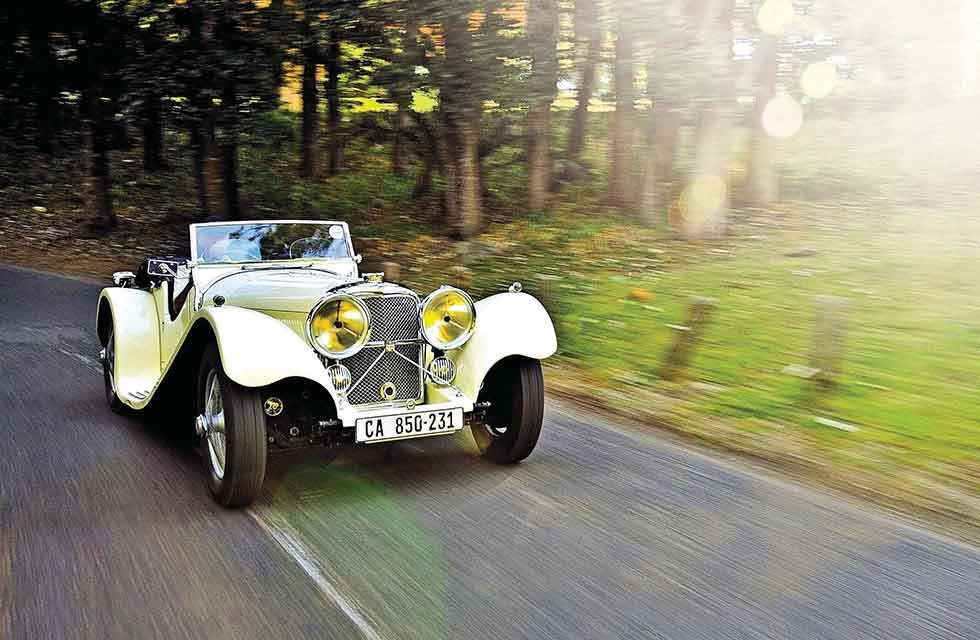 Was the first production car to bear the Jaguar name all show and no go? Time to find out, with a spirited drive in sunny South Africa. Words Robert Coucher. Photography Ian McLaren.

Jaguar. A name that succinctly represents the quintessential classic British motor car. The rakish, almost flamboyant SS Jaguar 100 you see here is the first model to bear the name ‘Jaguar’. The preceding S.S.90 model was an S.S. – with full stops – which stood for Standard Swallow, or was it Swallow Sports? Conjecture about the name was never entirely resolved because it suited William Lyons to have his engine supplier, the Standard Motor Company, think it was Standard Swallow, while his employees at the Swallow Sidecar Company Ltd thought it was Swallow Sports.

William Lyons and William Walmsley founded the Swallow Sidecar Company in 1922 in Blackpool. Initially it manufactured motorcycle sidecars, then it went into coachbuilding motor cars. The first car the company rebodied – some might say Lyons ‘pimped’ – was an Austin 7, and this was followed by further Swallows based on Standard, Swift and Fiat chassis. In 1929 Lyons teamed up with Captain John Black of Standard and created the first SS (Standard Swallow), followed by the SSI and SSII coupes. William Lyons formed S.S. Cars Ltd in 1934 and the company name was then changed to Jaguar Cars Ltd in 1945. He was knighted in 1956.

‘I immediately pounced on “Jaguar”, for it had an exciting sound for me,’ said Lyons, in later life. ‘An old school friend had joined the Royal Flying Corps… he was stationed at Farnborough and told me of his work as a mechanic on the Armstrong Siddeley “Jaguar” engine. Since that time the word Jaguar has always had a particular significance to me and so SS Jaguar became the name by which our cars were known.’

William Lyons may well have been an autocratic and tight-fisted individual but he was a gifted stylist. He created some of the most beautiful motor cars in automotive history. From the initial Swallow, to the SS100, XK, XJ, C-type and D-type racers, all his vehicles were absolutely perfectly styled, from sports cars to large saloons.

This 1936 2 ½ -litre SS Jaguar 100 proves the point. From every angle it looks superb. Some of the old school thought the SS100 was a bit too rakish and caddish but it was a pure sports car priced at just £395 when new, undercutting everything else on the market. This beautiful cream example, chassis number 18033, lives in sunny Cape Town, South Africa, and is owned by collector and historic racer Fred Phillips.

‘I have always loved the looks of the SS100 and managed to find this car hidden away in White River, which is miles away near the Kruger National Park,’ says Fred. ‘It had been crashed at some time in its early life and then lovingly restored, from at least a looks perspective. I had seen the car as a runner some years earlier so, believing I knew what I was buying, I hooked up my trailer and drove the 1300 miles to collect it. Alas, there had been a mechanical calamity and the car was in dozens of pieces but complete. I strapped it onto the trailer with all the parts in lots of cardboard boxes and, of course, the rain came pelting down on the way home, so the boxes disintegrated and parts started flying off the back of the trailer..

He rebuilt the SS100 himself over a two-year period and was surprised at how good the supply of parts for these cars is, from both Britain and America. Johnston Engineering in Cape Town did all the machining and built up the sub-assembly, and the engine runs as new.

The SS100, first launched in 1935, evolved from the S.S.90, which ran a Standard sidevalve engine of which William Lyons commented: ‘It just wouldn’t pull the skin off a rice pudding!’ A bit cruel, but the great engineer Harry Weslake was tasked with designing a new overhead-valve cylinder head for the 2663cc straight-six, which increased the power output from 75 to 105bhp at 4500rpm. Weslake considered the cylinder head one of his best achievements; Lyons remembered the occasion as ‘one of the best breakthroughs we ever had’.

Now the SS100 not only had the looks but it was also a properly fast sports car, capable of 95mph and a 0-60mph sprint of 12.8sec. This speed is efficiently shed by Girling rod- operated Millenite ribbed drum brakes, which do not suffer from fade. Burman- Douglas worm-and-nut steering helps keep the Jaguar accurate and the solid axles are suspended and damped by both hydraulic and friction dampers on the front axle but only Luvax CMP hydraulic dampers on the live rear axle, something of a weak point.

The 18in wire wheels are today shod with chunky 5.50×18 Blockley tyres and it’s interesting to note SS100s had Lucas QK596 headlamps originally, not the more well-known P100s; and only one ‘fly’s eye’ rear lamp is mounted on the offside rear wing on British models, while the export models had one each side. Lyons penny-pinching again?

So what is this Jaguar like to drive? Ingress is via a flimsy suicide door into a tight cockpit and the large Bluemels steering wheel leaves little space for thighs. The seating position (on leather-covered Dunlopillo cushions) is typically arms-out, there is plenty of legroom but not much space for large feet, and the view along the long, louvred bonnet and widely splayed front wings is special. The dash is full of cream-faced Smiths instruments with blue markings. ‘A bit flash for Guards Club types,’ notes Fred.

The Weslake engine fires instantly and sounds much larger than its 2 ½ -litre capacity would suggest, sucking through twin 1 ¼ in SU carbs. The clutch is light, the gearlever requires only a short wrist action into non-synchro first, but the steering is heavy via the flexible rim. Still, the SS100 moves off easily thanks to 167lb ft of torque at just 2800rpm.

The gearshift is synchro’d from second but it’s best to take it a bit slow. The lovely little straight-six is eager and reacts quickly to accelerator pedal increments, even if the rev band is limited to about four-and-a-half thou’. On smooth tarmac the SS100 gets up and goes with intention. The steering quickly lightens and the brakes, though not full of feel, certainly work effectively and inspire confidence. The gearshift is remarkably neat and tidy, and soon you are bowling along at quite a clip, the sensation of speed enhanced by the very open cockpit.

When you start to push the Jaguar it responds in a benign manner. Going a bit faster into corners the Blockley tyres allow the separate chassis to ease into a drift. You feel the old car settle its weight onto the outside tyres, sit down, then you unwind a bit of steering lock as the grip gently lets go. All very satisfying and all at legal speeds, though the SS100 comes apart a bit when the road gets rough. It does not like transverse ridges, which can cause that under-damped rear axle to jump and lurch the car.

Some regard the SS100 as being a bit dandy, but this is dispelled when you drive it. It is a pure vintage sports car, something that’s backed up by its competition record. One of the SS100’s first successes was its underrated victory in the 1936 International Alpine Trial, where Tommy and Elsie Wisdom won a ‘Glacier Cup’. Then, in 1937, Jack Harrop won the RAC Rally, and various victories followed at the Brooklands and Goodwood Circuits. In 1948 Ian Appleyard entered his nine-year-old SS100 in the Alpine Trial and came away with a Coupe des Alps and first in class. It’s a proper bit of kit, the SS Jaguar 100.

Left and above: Coucher gets to grips with the SS100’s springy Bluemels steering wheel, before taking to leafy South African backroads; the SS100’s overhead- valve straight-six was based on a Standard sidevalve, massively improved by Harry Weslake.