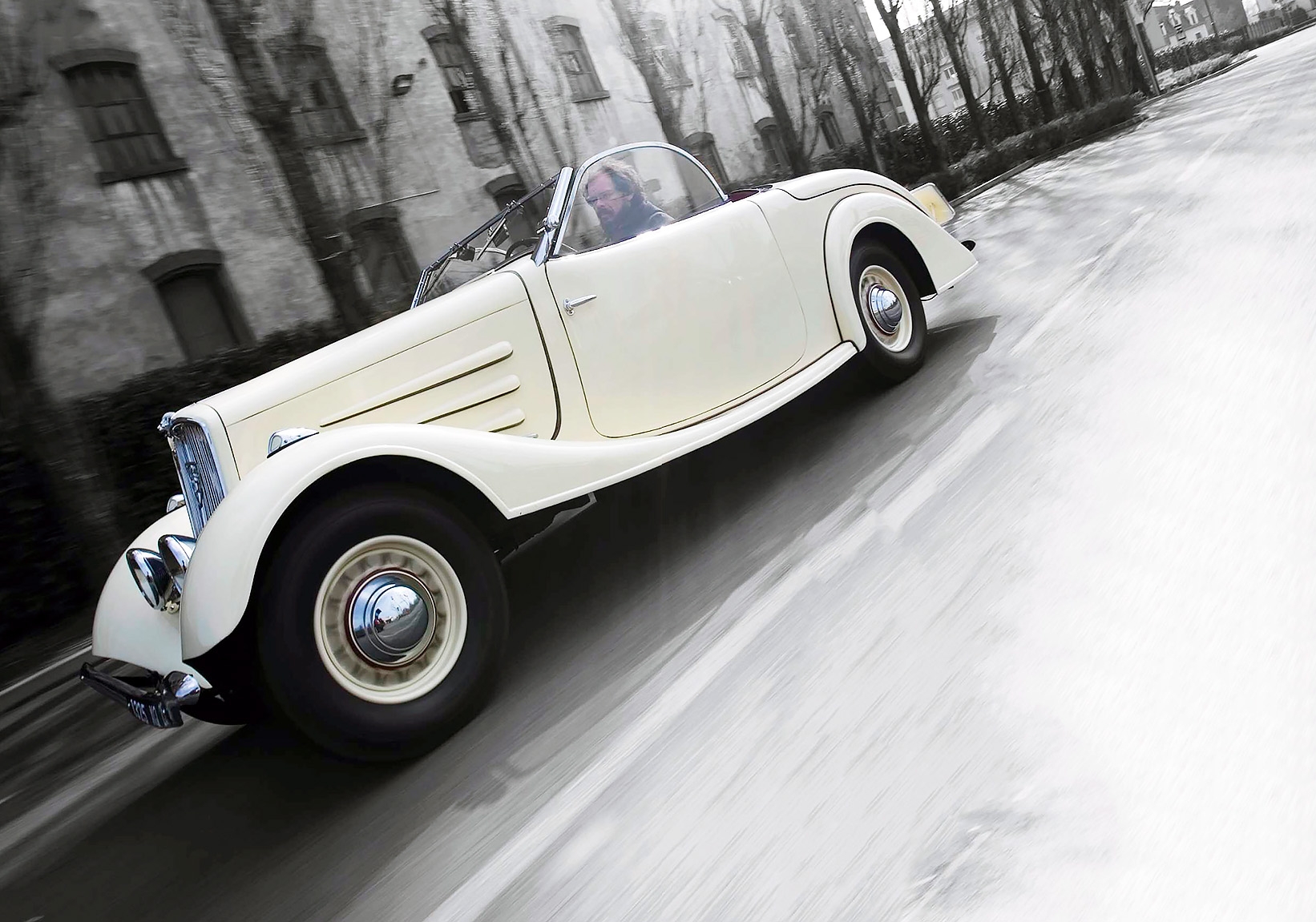 Think the coupe convertible is a modern invention? Then think again – the first was built in the Thirties by a French dentist. Join us for a spin in the world’s oldest surviving folding tin-top. Words: Bart Lenaerts Photography: Lies De Mol.

Meet the grandaddy of all today’s coupe cabriolets – cars with a folding metal roof that retracts at the touch of a button. The idea became reality in the 1935 Peugeot 401 D Eclipse you see here – the world’s oldest surviving tin-top convertible. The car was the brainchild of a French dentist and would-be car designer called Georges Paulin who in 1927 noticed how a neighbour lost both his temper and his fingernails every time he attempted to lower his car’s canvas hood.

This example is the last survivor of the 79 Peugeot 401 Coupe cabriolets that were built in 1935 incorporating Paulin’s folding roof. It’s a tribute to his ingenuity and sheer perseverance – plus the Peugeot technician’s engineering prowess – that even after eight decades the roof opens flawlessly. Just loosen three catches and press a switch and the big roof moves into the back in one elegant movement for instant – well, near instant – top-down driving. But don’t try it too often: opening or closing the roof electrically just five times will drain the car’s battery. So it’s probably just as well that there’s also a manually operated crank – the French call it a manivelle. It’s easy to imagine that, having used the electric roof once to impress onlookers when setting off from the busy boulevard cafe, most owners would then be content with using the battery- preserving manivelle. For an even purer open-top motoring experience you can also lower the windscreen.

Don’t be fooled by its sleek appearance – the 401 Eclipse may have earned its place in the annals of automotive history, but it’s no sports car. Nor does it have any door locks, although thieves would have to prepare their escape route carefully because this Peugeot is anything but quick. The 1720cc sidevalve straight- four is served by one thimble-sized Solex carburettor. 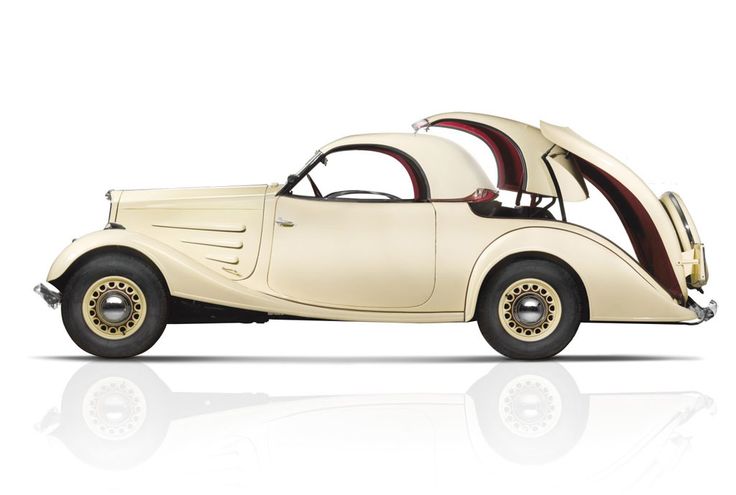 Despite being underpowered, the 401 offered many touches that were cutting-edge in the Thirties, including an electric starter and independent front suspension. It steers with astonishing precision for a pre-war saloon, and remains stable even on potholed roads. The heavy roof puts a lot of weight on the rear wheels, making the nose slightly light, especially with the roof down. Out on the open road this translates to an initial feeling of understeer, but this can transform abruptly into brutal oversteer as all that heavy-duty bodywork starts to move around a bit. 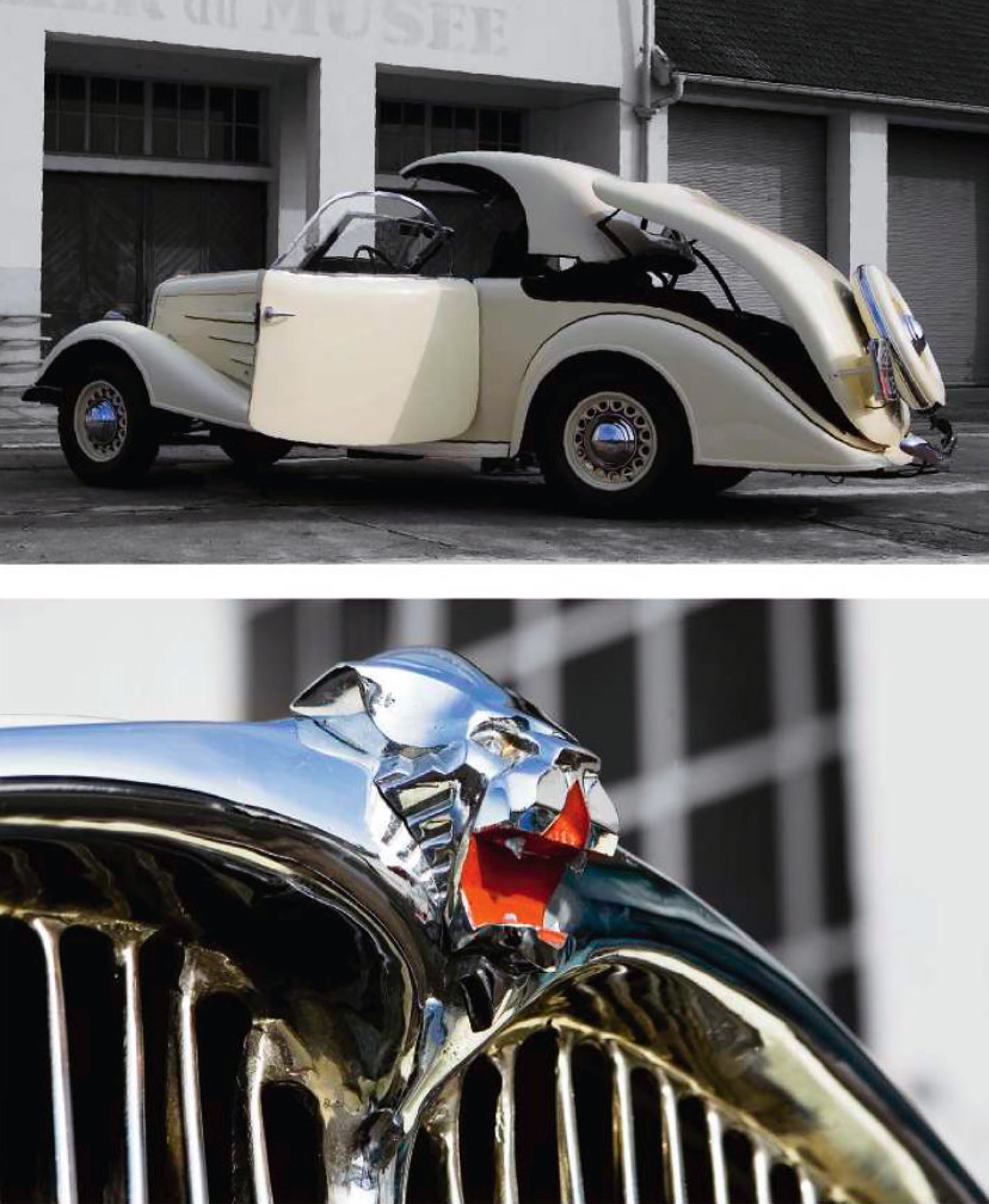 Total weight is a hefty 1300kg, so don’t expect swift acceleration. In fact, don’t even expect moderate acceleration. To achieve the 100kph (62mph) top speed takes about the same time as operating the roof – a full minute. Thankfully, the gearbox is nicely synchronised and the ratios are well chosen. The steering isn’t assisted, but feels amazingly light as soon as you pick up some speed. The car uses one transverse leaf spring in the front and two semi-elliptic springs at the back to provide reasonable comfort without making the car too wobbly in corners. The cable-operated drum brakes are slow to react, and underpowered when they do.

A fine sense of drama

It took Paulin four years of labouring at his desk in his spare time before he could walk into the patent office with elaborate plans for a Citroen Rosalie equipped with an electric motor that folded the steel roof neatly into the rear bodywork. With a fine sense of drama, he baptised his invention ‘Eclipse’, because the moving top resembled the moon moving across the face of the sun.

‘With the roof closed, you hardly notice you’re in a cabriolet – only two bars give a clue that there’s a moving mechanism’

Patent secured, Paulin (not yet aged 30) took his design to Citroen’s Paris headquarters at the Quai Javel, only to have his hopes dashed. Citroen was too busy with the groundbreaking Traction Avant – and probably with infighting – to take an interest in his invention.

His luck seemed to change when he met Parisian coachbuilder Marcel Pourtout. Pourtout had a wealthy client called Blum, who had commissioned him to come up with an excitingly unique body for a Hotchkiss. An Eclipse roof seemed to fit the bill – until it transpired that Monsieur Blum wanted to produce and sell a range of cars fitted with the device. Not surprisingly, Paulin didn’t feel like handing over his invention.

Fortunately, Paulin’s father-in-law chipped in with all his savings – just enough to buy a Peugeot 301 chassis to be bodied by Pourtout. The resulting cabriolet looked so good that Parisian Peugeot dealer Emile DarPmat displayed it in his showroom, where it quickly attracted the attention of Peugeot’s bosses. While Pourtout, Darl’mat and Paulin were building a second Eclipse-roofed car – a massive Peugeot 601 for novelist Marcel Pagnol – the big shots at Peugeot made Paulin an offer he couldn’t refuse: he would earn 100 francs for every 401 convertible coupe that was sold through the Peugeot dealer network.

Today, following the disappearance of the one-off Hotchkiss and Peugeot 301 this is the oldest surviving coupe cabriolet. It has pride of place in L’Aventure Peugeot museum in Sochaux, which restored the car after acquiring it about ten years ago. The car pulled the crowds at Pebble Beach in 2004 but now rarely leaves the museum, whose archivist Jean-Louis Laine thinks he knows why the Eclipse never had the success it deserved. ‘Even a simple car like the 401 was only within reach of the well-off upper middle class,’ he explains. ‘Peugeot also offered a traditional 401 cabriolet that didn’t sell in very big numbers. So the Eclipse, being 40 per cent more expensive, filled a very small niche at the high end of the market. It didn’t help that Peugeot didn’t make much effort to push sales.’

In fact, the company didn’t even use the Eclipse name, preferring the more prosaic Cabriolet Tole (literally, ‘convertible sheet metal’).

Seeing the car in the metal, it’s clear that the gifted Paulin wasn’t involved in its design. Peugeot’s contemporary catalogue images made it look majestic (see opposite page), but the reality is less imposing. The sloping back has an elegant Bugatti Atalante touch, but doesn’t sit well with the standard 401 front end.

The steel dashboard looks a little cheap, housing just one dial and a few switches – but the wood on the doors, the quality leather on the seats and the deep carpet in the back more than make up for it. With the roof closed, you hardly notice you’re in a cabriolet – the roof lining is beautifully finished and only two bars give any clue that there’s a moving mechanism up there.

There’s more than enough headroom and legroom, which isn’t always the case with pre-war cars. The big steering wheel is slightly too vertical to feel sporty, but the pedals and gearknob are exactly where you expect them to be. There’s a modest transverse seat in the back – really only suitable for a small child – and a leather flap hides an easily accessible luggage compartment located neatly between the hinges of the folding roof.

Peugeot sold only 79 examples of the 401 Cabriolet Tole, plus 580 more flamboyant 402s and 21 of the 601s. No matter how clever its design, it’s not hard to understand why the model flopped: the roof was too complex and expensive for a car like the 401 and neither Peugeot nor Paulin made much money from it.

So, just how complicated was the engineering and design of Paulin’s creation? Peugeot’s own advertising promised that you’d be enjoying wind-in-the-hair motoring within 15 seconds, but it takes the electric motor four times as long to complete all the manoeuvres required to open or close the roof. And even a super-fit, elite Olympian wouldn’t beat that time by using the manual lever in the rear.

It’s not that the electric motor is underpowered. The problem is that both the massive steel roof and the even bigger steel boot are so incredibly heavy. While the boot folds open over three central hinges in the bumper area – guided by two slim hinges at the other side – the roof slides in snugly to the boot. It’s impressive to watch; a bit like a mechanical ballet.

Considering the size and weight of both panels, and the few connections there are to guide everything, the adjustment needs to be micro-precise. After all, they didn’t have the luxury of electronic sensors to confirm that the roof and boot had snicked perfectly into place.

Complex, yes; but, like its creator, very clever. A truly tragic hero, Paulin was aged just 40 when he died in such awful circumstances (see panel) and who knows what he might have achieved? Peugeot never granted him the recognition he deserved and he was only ever paid decently at Rolls-Royce, where he hardly had time to make an impact.

When you consider the impressive list of cars that adorn his brief CV, Paulin could surely have risen to the same giddy heights as Giorgetto Giugiaro or Nuccio Bertone. And it’s also worth remembering that he spent most of his career in dentistry, not car design.

Paulin’s achievements were recognised in 2004, when the Pebble Beach Concours d’Elegance celebrated his work by showcasing some of his innovative designs, including the Bentley Embiricos, the first Delage D-8 120, several Talbots, the Peugeot 302/402 Darl’mat – and, of course, the Peugeot Eclipse that first sparked his genius for innovative automotive design. 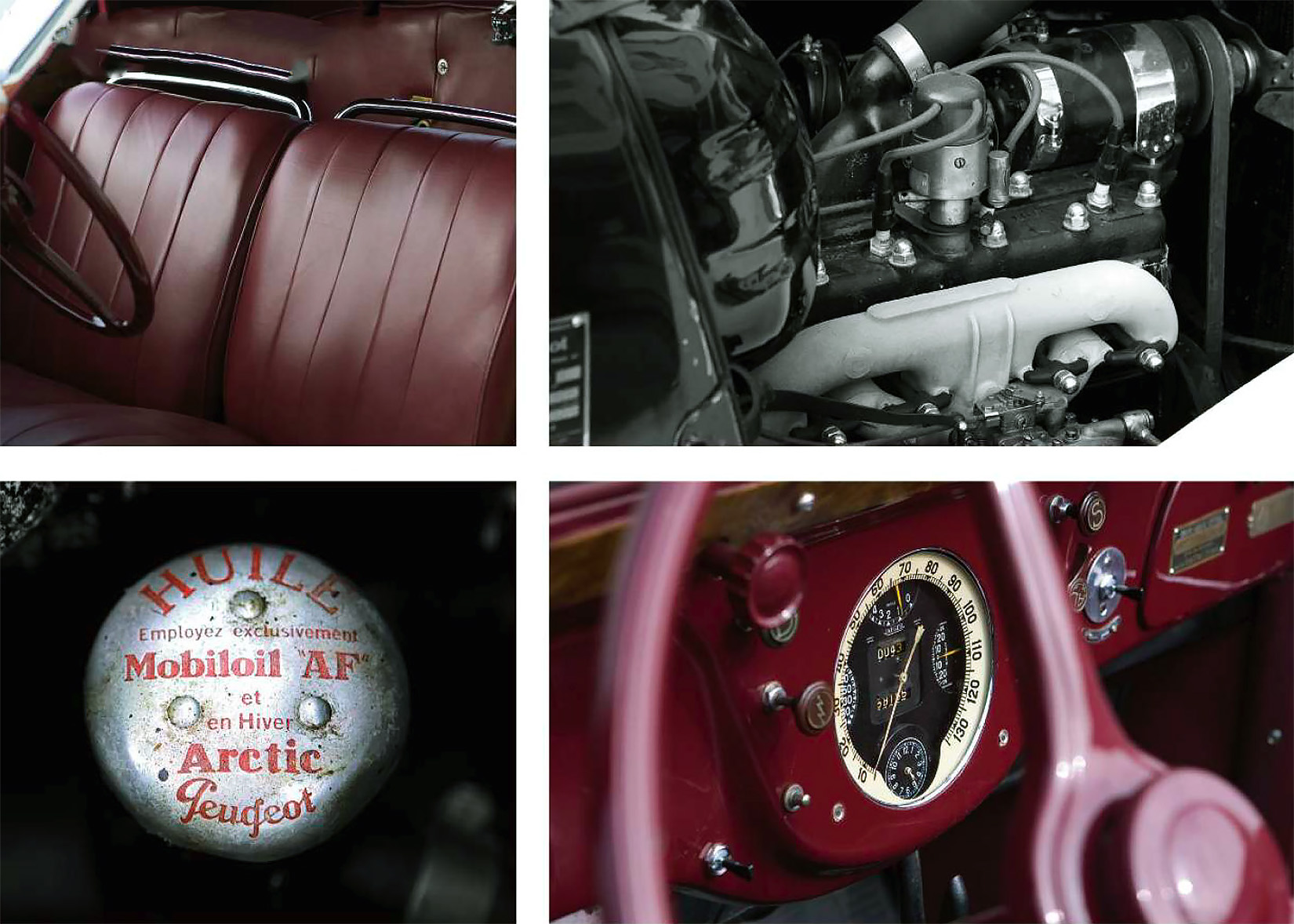 Quality leather was aimed at attracting affluent middle class buyers. Modest 1720cc sidevalve motor has its work cut out hauling around Eclipse’s heavyweight bodywork. Metal dash features a single dial – and of course the switch for opening and closing the roof electrically. Factory engine oil recommendations include a winter-only lubricant.

After graduating as a dentist he was visited in his consulting room one day by Rolls-Royce agent Walter Sleator. Rolls liked what it had seen of his work on the Embiricos, and Sleator offered him a job. Paulin seized his chance and joined the company in 1938. He then worked on the Comiche.

It was a career cut short in tragic circumstances. Paulin was recruited by British Intelligence during World War Two but was betrayed when working with the French Resistance and captured by the Gestapo. He was executed in March 1942, aged just 40.