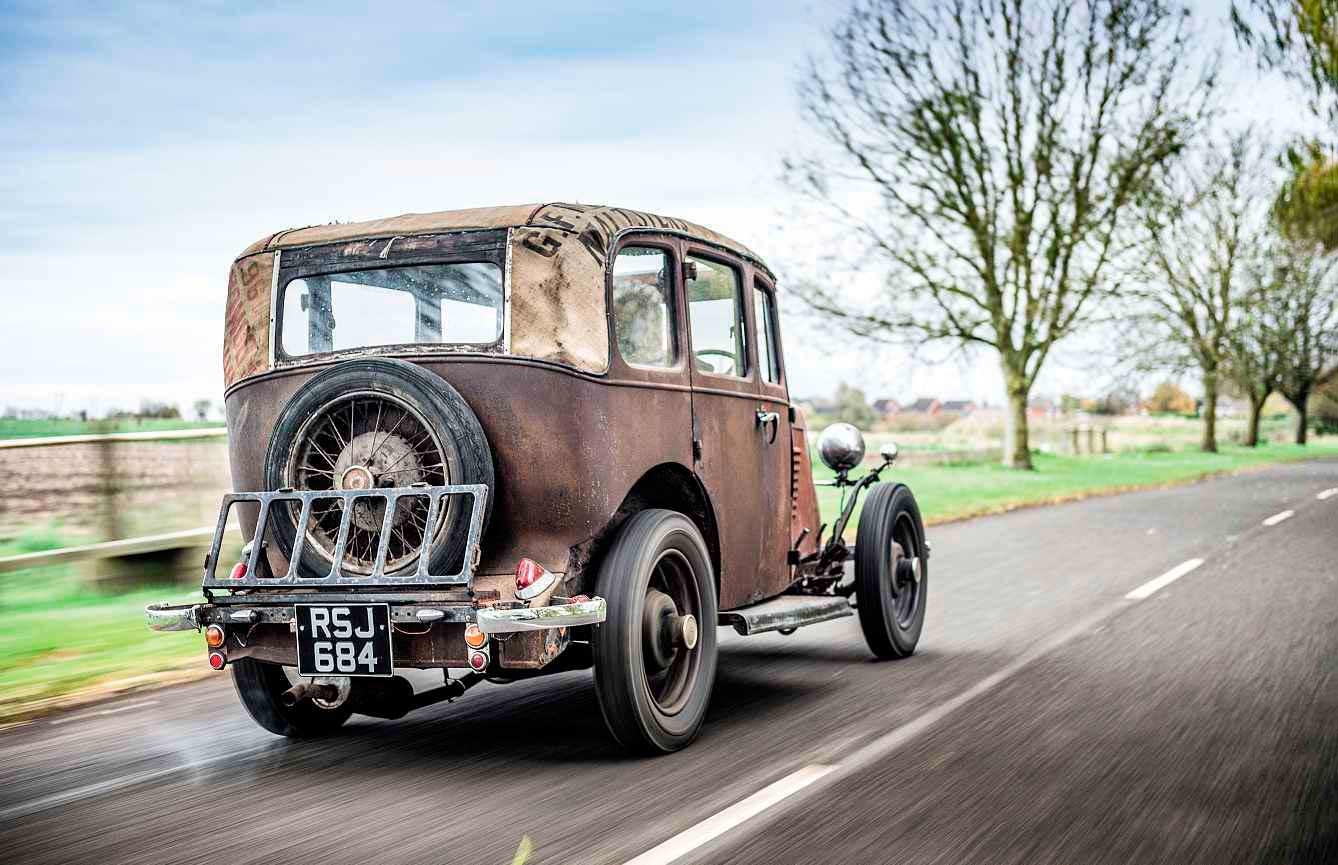 BSA 10 Rat-Rod Rescued from a fire; unconventionally rebuilt. This 1935 BSA Ten was reincarnated after a catastrophic blaze – using only materials its restorer had to hand… Words Martin Gurdon Photography Alex Tapley.

Burnt-out BSA rescued from the flames

As strange career experiences go, piloting a burnt-out 1935 BSA Ten saloon across the flatlands of the Cambridgeshire Fens comes some way up the list. This boxy little car pitches and rattles along the often clapped-out tarmac of the narrow, ruler-straight roads bisecting big fields that are being worked over by big tractors, which come from sprawling farms patrolled by big, free-range dogs that look as if they would enjoy snacking on unwanted visitors.

Some of these animals have a distinctly weathered appearance, but not as much as the BSA. It might be described as scarred for life, or at the very least ‘interestingly distressed’, a state that I begin sharing with it when the thudding staccato of its B-series engine (we’ll explain how it came to have this motive power in a bit) becomes a dying stutter and the car rolls to a stop in the middle of a windswept not-very-much. At least the lightweight BSA is easy to push.

This predicament occurs some time after I first saw this curious car at the Silverstone Classic, where I’d become intrigued by its heading-back-to-nature patina, and the fact that it had clearly survived being in a fire, something that had been flagged-up rather than actively repaired. The end result has a rat-rod vibe without actually being a custom car, and the more I look at the BSA’s detailing, the more apparent it becomes that recycled parts have been used in its reincarnation. There are other surprises, too.

‘It’s got an MoT,’ says owner Mark Fishpool, which is certainly unexpected, given the car’s singed, denuded state. A cheerful son of North Cambridgeshire with a shock of curly grey hair, Fishpool bears a resemblance to the actor George Baker, who played Chief Inspector Wexford in the cosy Ruth Rendell Mysteries, and has a laid-back approach to life and cars. Maybe that explains why this one has ended up looking the way it does.

After a three-decade career in the building trade and with a lifelong interest in old vehicles, fuelled by visits to steam fairs (‘My wife said “You’re not having a bloody traction engine”’), Fishpool hung up his building tools and started working full-time on cars that interested him, buying and selling some to fund his passion and pay the bills. ‘I could earn more money in building, but I’d been chasing the dollar, wasn’t enjoying it as much as I used to, and didn’t want to get to 70 and think “What did I do with my time?”’

When it comes to old cars, Fishpool is a man who can’t say no. At the back of his house is a workshop where you’ll find diversity illustrated by a Jaguar XK150 drophead and what is probably a unique Lanchester LA10 shooting brake, which is largely original, having spent most of its life on a country estate. Here he does everything from mechanical rebuilds to fabrication.

‘I pull things out of barns,’ says Fishpool. ‘It’s a bit like going to an animal rescue, and one of the dogs befriends you. Well, you can’t refuse, can you? I’m like that with cars.’

Fishpool has an equal opportunities approach to his collection. If it’s old and he’s got the space for it, he might very well give it a home. ‘You’re put on this planet for a reason,’ he says. ‘You work with your hands or you work with your head – I think you’re destined. When I’m in the workshop I’m in my element. I’m here to rescue things.’

So it was with the BSA. Its backstory is something of a mystery, but it was one of a number of vehicles in a bodyshop that caught alight. Rescuers managed to push it clear, but not before the little car had suffered fire damage to its body’s timber frame and canvas roof, although such elements as the glass (Triplex ‘safety glass’ apparently; this was one of the model’s selling points), dashboard and more had survived intact, its panels were un-warped, and it could have undergone a conventional restoration if the money and man-hours were justifiable.

When Fishpool heard about the car it was being sold as a basket of parts, and arrived minus its engine. He didn’t really know what to do with it but, having cleaned out the shell, which even now gives off a slight whiff of charcoal, an idea began to germinate. ‘I thought, why not put it back on the road using only parts I could source from the workshop, leave the body as it was, and try to keep the costs down.’

Thus the car uses the engine and transmission from a terminally rusty MGB. The centrally hinged bonnet is held in place by elliptical spring clips fashioned from metal offcuts found in Fishpool’s workshop. Cut-down MGB cam covers are used to protect bits of a rudimentary wiring loom. The low-hanging exhaust is a one-off, coming together from tubework that would have made W Heath-Robinson proud.

Not much of the interior’s leather trim survived, but the seat frames could be salvaged, using proprietary foam. However, there was the expensive and time-consuming issue of what to cover them with. Quite why Fishpool had a collection of 1950s hessian grain sacks isn’t clear, beyond them perhaps being a bargain buy, but they slipped over the seat frames remarkably easily, creating an interesting aesthetic in the process.

To keep the weather out, he panelled the roof frame with exterior-grade ply, overlaid it with rubber sheeting and covered that with more hessian sacks, whose rough-hewn, pale brown goes with the paint-free surface rust that covers the rest of the coachwork.

The BSA once had trafficators, whose twisted remains are still in their slots. The car now uses little flashing indicators, and 1950s brake lamps that look like red plastic cow hooves and were once common on Jaguars and Morris Minors.

Three of its chrome doorhandles survive, although tarnished and in at least one case partially melted. The front passenger door is accessed using a round, elderly domestic brass doorknob. The end result is both vehicular sacrilege and a sort of art installation on wheels. It shouldn’t look great, but it does and had it been the work of Tracey Emin rather than Mark Fishpool (Unmade Car, anyone?), it would be worth a great deal of money. As it is the whole thing cost its builder around £1000, including buying the BSA in the first place.

Its original maker is associated with motorcycles but was once an industrial combine that began with rifle-making (hence Birmingham Small Arms) and became the owner of Daimler and Lanchester, the latter bought during the Great Depression to sit between patrician Daimler and BSA’s light cars, some of which were three-wheelers, some front-wheel-drive.

The Ten is not, because it was in essence a badge-engineered version of the Lanchester LA10, fitted with a BSA-designed sidevalve engine, mated to a four-speed Wilson preselector transmission, which would have been a luxury feature in a small car like this. The fluid flywheel would have given it the distinctive whirr-whirr once synonymous with generations of London buses that had similar transmissions. On Fishpool’s car a steering column selector lever is all that remains of the system, and a stubby little MGB gearlever now juts from the floor.

The car has retained its leaf-spring suspension and rod-operated brakes, whose drums look rather insignificant for a vehicle equipped with an 1.8-litre engine lifted from a sports car, but they actually work rather better than you might expect. I hope its creator won’t mind me saying this, but the BSA is rorty, flatulent and potentially scary to drive. Although less nose-heavy than you’d imagine for something with skinny tyres and a big iron lump of engine rammed up its snout, and blessed with surprisingly accurate steering, it rolls like a dinghy, tramlines with fiendish intent and would be capable of lethal forward velocities if given the opportunity.

It’s also a work in progress. Mark Fishpool brought it to our photo shoot on a trailer, mentioning that he hadn’t really driven it very far, which is why it’s suffering repeated fuel starvation episodes thanks to a sticking carburettor float, cured by whacking it with a spanner. Running three-up with photographer Alex in the back, it clouts the drooping exhaust on a farmyard rut, after which the BSA growls at the guard dogs, who aren’t even slightly scared. Finally, it takes up smoking when an oil-cooler pipe begins letting go and lubricant spatters the hot engine, but by that stage I’ve got its measure: leery, lurchy and too fast for its own good. As something to drive this is the work of the devil; but, as something to look at, Mark Fishpool’s rescued BSA is a work of art.

‘It had clearly survived being in a fire. the end result has a rat-rod vibe without actually being a custom car’

Top and above Looks like it shouldn’t be driveable, yet it is – just about; motive power courtesy of MG B-series. Above and right Surface rust rather than paint, and Heath-Robinson detailing; plenty more conventional treasures in workshop of owner Fishpool (on the right, with author Gurdon); interior is trimmed with hessian sacks.