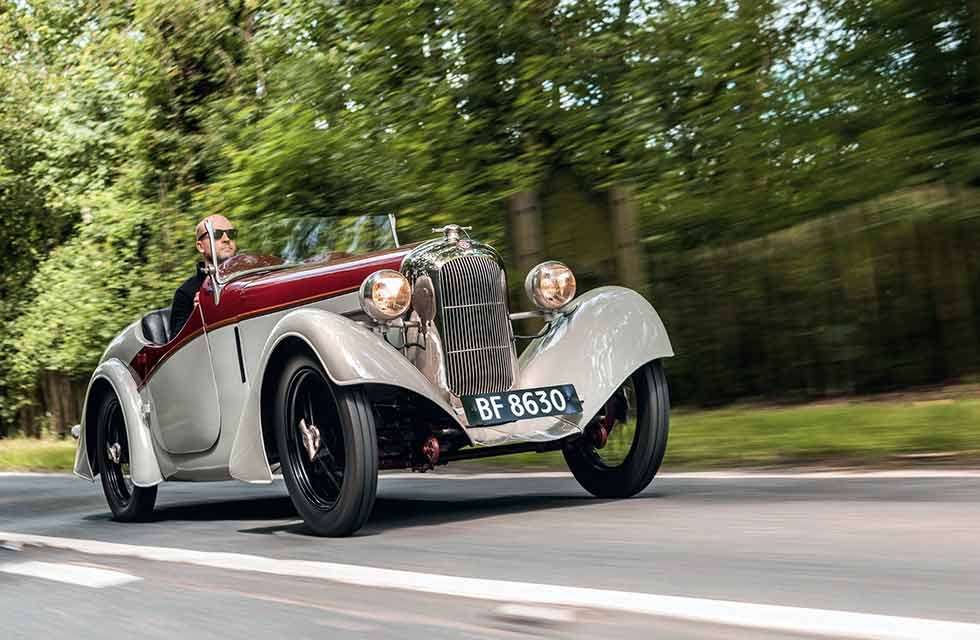 One of the great lost French marques, Salmson slipped into obscurity when its doors finally closed in 1957. The firm had soldiered on for three years since bankruptcy, and, even as Renault executives were running a measuring tape over the factory, Salmson’s final model – the 2300 S, released in 1953 – was still thundering along the Mulsanne in 1955, ’1956 and ’1957. To the last, Salmson kept alive a sporting tradition that began in its earliest days: when time was called, the works could boast of 550 race wins. The link between its Grand Prix pedigree and its roadgoing tourers was never closer than in the ’20s, and in no model is it better exemplified than the GS8 Roadster – one of the last cars to carry the marque’s venerated twin-overhead-cam 1100cc engine.

Salmson progressed from production of steam-powered pumps to petrol motors towards the end of the 19th century, and the emerging field of aeronautics quickly proved an irresistible draw for Émile Salmson and business partners George Canton and Georg Unné. Turning its energies toward powered flight and the engineering challenges it represented, Salmson produced its first barrel engine in 1908. And just eight years after the Wright brothers proved their concept at Kitty Hawk, the first Salmson-powered aircraft made its maiden flight, delivering post from Allahabad to Naini in India in 1911. A decade later the company’s 260bhp, nine-cylinder Salmson 2 comprised a third of France’s entire fleet of reconnaissance aircraft.

Following the end of WW1, Salmson moved away from aircraft design to focus on another exciting and ever-expanding field of engineering: motorcar manufacture. Its Billancourt factory was turned over to automobile development in 1919 and, in an attempt to return to production as quickly as possible, a deal was struck with British firm GN to produce – under licence – its cyclecar.

‘Give that jewel of a long-stroke engine the chance to lengthen its stride and the GS8 is in its element, spinning up beautifully’

That October, Salmson became one of a staggering 65 automobile manufacturers to display its wares at the first Paris Salon to be held since 1913 – its presence a remarkable achievement given that the company had only received technical drawings three months prior, and practically everything (including magnetos) had to be built from scratch. The sextet of cyclecars on show caused a stir for their sleek lines and bright colours, and a guerilla marketing effort strategically parked them outside restaurants and cafés in the capital. Some 1600 cyclecars would be built in the following four years, scoring competition success just like their GN cousins.

Instrumental in turning around the cyclecars so quickly was André Lombard, a gifted engineer with a dream of producing a car bearing his own name. Backed by Salmson, Lombard designed a tourer that remained a cyclecar at heart – featuring a similar front suspension and axle arrangement to the GN with quarter elliptic springs at the rear – but powered by a more mature water-cooled four-cylinder engine designed by Emile Petit. Emblazoned with a saltire across its tall, narrow radiator, the first true Salmson was launched in July 1921, known as the Type AL (Lombard had produced his own badges, but had to settle for lending his initials).

Petit’s pushrod four-cylinder cyclecars became Salmson’s bread and butter, selling more than 10,000 examples in various guises between 1921 and 1929. But tucked away in the courtyard of DM Historics’ Tonbridge headquarters today lies something altogether more exciting.

With its narrow bullnose radiator, raked windscreen and semi-spatted wings, the Salmson GS8 Roadster gives the impression of a grown-up machine. Such is the car’s delicate proportions, it’s difficult to gauge the Salmson’s size until you’re up close and towering over its diminutive frame, decked with design cues that would seem as at home on a Grand Prix racer as they would a civilian tourer. Which is fitting, because beneath its attractive two-tone bodywork was the final roadgoing development of the ‘Service de Course’ cars that were sold to racing drivers and main agents throughout the 1920s, and which flew the flag in events that didn’t warrant a full-blown works entry.

It might not feature the trademark staggered seats, slim body or external exhaust of the Service de Course models, but the 130 GS8s built between November 1927 and April ’30 did employ the same straight-sided racing chassis as the competition cars. Sitting a good three to four inches lower than more common AL3 and VAL3 variants, owing to its springs being sited below the rear axle where previously they were located above, the GS8 also had a wider-track front axle that allowed the engine to be mounted lower in the chassis, improving the centre of gravity and with it the handling.

Despite its sporting pretentions, the run-out Grand Sport was not immune from the factory’s cost-cutting, and among the standard Salmson parts carried over were wire-spoked wheels and the ageing and slightly agricultural in-house three-speed gearbox. Undoubtedly the greatest draw for the more spirited driver lay in the engine bay beneath the centre-hinge bonnet.

Salmson’s foray into the world of low-capacity, high-efficiency engines came hot on the heels of the Type AL’s entry in the Swiss Six Days Trial in 1921. Petit soon modified the prototype’s conventional pushrod ‘four’ by fitting a completely different crankshaft supported by five ball-races making up three bearings in place of the original engine’s two. Inclined overhead valves – two per cylinder – were operated by twin overhead camshafts, driven by a vertical shaft and bevel gearing at the front, which were accommodated by a bolted-on bronze housing.

The cylinder head was further modified before competing at III Grand Prix de l’UMF Cyclecars at Le Mans that year. The single inlet port became a three-port type, except with the original centre port being blanked to allow fitment of twin Claudel Hobson carburettors, while the pushrod unit’s flywheel and inverted cone clutch were retained. Incredibly, Emile Petit turned it around in just four weeks.

The car’s first outing at La Sarthe wasn’t without its tribulations. A seized gearbox suffered during a reconnaissance lap had to be hastily repaired, while later, ahead of the weigh-in, Petit spotted that the rear axle case was damaged. A replacement was ordered from Billancourt with the instruction that two cars were to bring it in case one broke down.

The part eventually arrived in the wee hours, following a lengthy delay after both crews stopped en route for a leisurely dinner, leaving Petit to work through the night in a café dining room to have the car ready for the race.

Lombard quickly made ground and by lap five he was leading. But, with three laps to go, the Salmson pulled off near Arnage due to a lack of fuel. Despite his 20-minute lead dropping to just five, Lombard recovered to win by 18 minutes, covering 193 miles at an average speed of 54.6mph, the overhead-cam engine running like a top. As The Autocar reported: ‘It was a case of Salmson first and the rest figuratively nowhere.’

The experimental machine was given the grisly nickname of ‘Spanish Murderer’ after it was involved in a fatal accident at Tarragona the following year, while a more affordable production version of the twin-overhead-cam engine had been built at Billancourt that found a home in the firm’s D-type. Works engines would continue with the trick ball-bearing crank, as did the top-of-the-line Grand Sport Special; most road cars made do with a two-bearing version. Though it went through many variations over the years, including some fiery eight-plug iterations that dominated on track, the Grand Sport’s engine shares much with the original production twin-cam that was first launched in 1922. Its 5.8:1 compression ratio and 27bhp at 3300rpm peak power output might not sound much, even in the arena of pre-war vehicles, but in a cyclecar officially weighing just 350kg the performance is more than adequate. It was just the car to ‘appeal to that class of motorist whose chief objective is sheer speed’, said the brochure.

The fourth GS8 built, ‘our’ car was delivered to German Salmson outfit Kehl am Rehin, where it received attractive roadster coachwork in 1928. It eventually came into the possession of an American GI, who returned with the car to Minnesota after WW2 before a suspicious engine knock consigned it to the garage in 1954. There it stayed until 2017, when it was sold and restored in all-grey trim – its original two-tone livery was reinstated later at DM Historics.

If the GS8 has a weakness, it’s the three-speed gearbox, which lacks synchromesh and has a mirrored layout with first and second on the right, and third on the left. Even by pre-war standards the ’box is difficult and doesn’t like to be rushed. Progress around town and on more technical country lanes becomes ponderous, especially compared to period rivals that tended to feature slicker, four-speed ’boxes.

Give that jewel of a long-stroke engine the chance to lengthen its stride, however, and the GS8 is in its element, spinning up beautifully and even threatening the national speed limit – if you’re brave enough. ‘On a good long open road, the old Sammy used to come into its own,’ wrote photographer Guy Griffiths in Motor Sport. ‘For mile after mile you could keep it flat out, and, though its maximum was not very high, it used to wear down the lower geared and more fussy cars which in town and more restricted country made it look slow.’

The GS8 Roadster’s comparative performance has no doubt faded since Griffiths’ day. But what hasn’t diminished is the car’s significance, and its place in history as a sibling of one of the world’s first production twin-cam-powered touring cars. Rarity, elegance and engineering excellence: pre-war motoring in this class doesn’t get much better.

Thanks to DM Historics (www.dmhistorics.com)

Main: coachwork was returned to its original two-tone scheme by DM Historics. Below, from left: nicely patinated badge; engine knock in ’50s took GS8 off the road; interior hints at cyclecar origins. From top: three-speed ’box is a tricky proposition; American GI owner in period with the GS8; recent restoration was more than 60 years coming.